Sichuan opera is a kind of Chinese opera which originated in Sichuan province years ago. Today, Sichuan opera is a somewhat fusion of the five historic melodic styles of the past. Chengdu is still the main place for Sichuan opera but there are other places including Chongqing, Guizhou, Yunnan, Hubei, and Taiwan where you can see this Chinese art.

This part of Chinese art is famous for its singing. Overall the art form is well known for its singing, which has been said to be less constrained than the better known Beijing opera style. Sichuan opera feels more like a play in comparison with the other styles of Chinese opera. In Sichuan Opera, highly polished acting is a fundamental matter.

The Sichuan Opera music mostly is done by a small gong and also a string instrument named Muqin. Sichuan Opera is an exciting one where you have the chance to see different stunts such as fire-spitting, sword-hiding, beard-changing, and face-changing alongside many different characters and interesting storylines.

Added to wishlistRemoved from wishlist 0
Add to compare
From: $2,658.00

There are five styles in Sichuan Opera and depending on the style, there are different face paints you can see. The colors of face paints are traditionally only white, black, red, and grey. The customs worn for this show are mostly traditional Sichuan clothing.

Face-changing is an important and crucial part of this art. Some roles based on their characters would abruptly change their masks which is for sure a scene to see. Some of the more professional actors of Sichuan Opera can change their masks more than twice in a matter of seconds. This is done so professionally and fast that even by watching the videos, it is quite hard to understand how they pull it off. 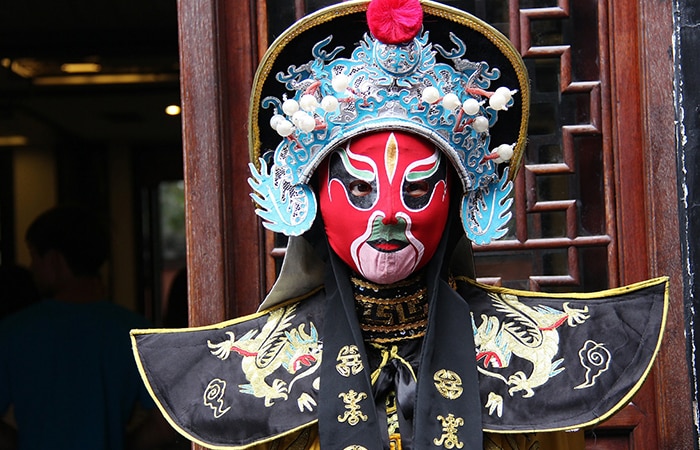 There were five different styles of Sichuan Opera and each had its history which are Gaoqiang, Kunqiang, Huqing, Tanxi, and Dengdiao (Dengxi). It has been said that Sichuan Opera has been existent since the Three Kingdoms period with some forms of Canjun Opera.

Later, during the Tang Dynasty (618 to 907), a band with five-member arrived in Chengdu. When the Song Dynasty (960 to 1279) was ruling, the opera slowly developed into Zaju, a form of Chinese opera.

In the Ming dynasty (1368 to 1644), performers mostly showed their skills in Jinling city which is the modern-day city of Nanjing. In the Qing Dynasty era (1644 to 1912) and the time of Emperor Yongzheng and Emperor Qianlong, the opera greatly changed and was merged with folk customs, local languages and etc. in different regions of Sichuan.

In the early 20th century, there were some attempts to reform the art by a revival movement. The most known reformer of this time was Kang Zhilin. He led the Sanqinq Company (Three Celebrations Company) which was one of the most worthy opera troupes. It was established in 1912 and nicely merged the five styles into one single opera on the stage.

Each style of Sichuan had its own style and music. Kang Zhilin had a classic move that included a high kick that would leave a “third eye” in the forehead. This is still one of the trademark moves of the Sichuan Opera.

After the Cultural Revolution of China, the Sichuan Opera suffered to some extent. Although there was some oppression toward this art form, it continued to thrive especially after the Chinese economic reform in 1978.