The island has a careful man-made layout set up during the colonial European period and has only three roads from west to east and five from south to north. This layout divides the city into 12 districts and there are some mention-worthy examples such as Shamian Hotel and White Swan Hotel. The island is connected to mainland China and the city of Guangzhou by four bridges, two on its northern side and two on its eastern and western sides.

Shamian Island (previously called Zhongliusha and Shicuizhou) is an island under the jurisdiction of Guangzhou city.  In fact, this island is a sandbank and the name translates as Sandy Surface. Shamian Island is in Guangzhou City’s Liwan District and resembles a large ship right next to the coast. Let’s take a closer look at this amazing island. Also, gaining information about tourist traps in China is highly recommended for your journey in this country!

During most of the imperial era of China, mainly from the Song Dynasty (960 to 1279) until the Qing Dynasty (1636 to 1912), Shamian Island acted as a crucial port for foreign trading activities of Guangzhou.

From the 18th to the middle of the 19th century, many foreigners lived and traded in a place called the Thirteen Factories. It is located on the eastern side of present Shamian, where once was an anchorage for the thousands of boat people who lived there.

At this point, Shamian Island was still a part of mainland China. In 1841, during the First War with the British forces, Shamian was a strategic defense point in Canton. In 1847, the foreign forces captured batteries and the other Chinese places defending the city.

During the Second Opium Wars, which France was also a part of, the British forces once again captured the forts of Shamian in 1856. Shamian became an island in 1859 when the French and the British dug the land and created an artificial river called Shajichong.

Later in 1859, this place was divided between the British and French forces. The British took 60 percent while the French took 40 percent of the land. The bridges which connected the island to the mainland were handled by the foreign forces. The British bridge was controlled by Sikh police officers and Vietnamese (Cochinchina) recruits guarded the French bridge.

There are some stone mansions on the island along the waterfront, built by American, British, French, German, Dutch, Portuguese, and Japanese trading companies. These structures were mostly built based on western styles, but the climate of the area made some changes to their style.

In 1925, Shamian Island was the scene for the June 23 incident and its fighting. In 1949, the mansion built in the area gradually turned into apartment houses or government offices and the churches became factories. 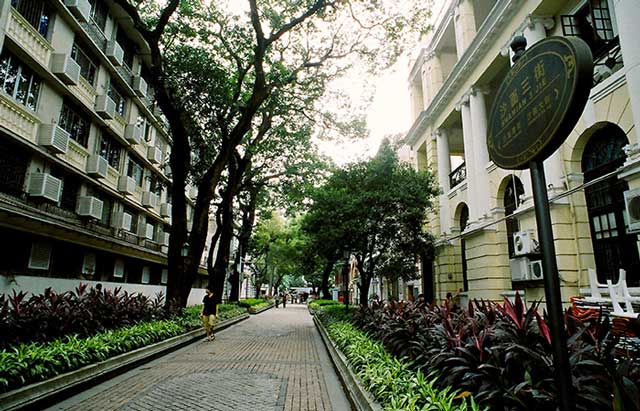 Highlights of the Island

Here you can see some interesting historical buildings in different European styles including Baroque, Gothic, and Neoclassical. Many of these buildings have changed their functions but still, are part of the history of Shamian Island. By visiting these buildings, you can reach a better understanding of the foreigners who have affected China in recent centuries.

An Adoption Place For Foreigners

Shamian Island is a well-recognized place for many Western couples. Since the early years of the 21st century, there have been many foreign couples who have adopted children from this place. These children are mostly female Chinese babies and young children who are often orphaned.

The White Swan Hotel which is right next to the Guangzhou Consulate of the United States has become a place to handle bureaucratic matters and file the needed paperwork. It is also referred to as Baby Hotel and White Stork Inn.

Thousands of Americans visit Shamian Island for the sole purpose of adopting a child every year.

Walking Down The Streets

Shamian Island is not a large place; but, you can see the prosperous city of Guangzhou on one side and open waters on the other. This feature has made Shamian a dramatic place.

Shamian is perfect for a short walk as it is quite small. From the furthest western point of the island to its furthest eastern point is only around 900 meters (980 yards). Shamian Island stretches from its north to south around 300 meters (330 yards).

Walking on this beautiful island won’t take much time and you won’t probably feel tired after circling the island twice. Shamian Island does not experience traffic jams and therefore, it has a rather diverse atmosphere of Guangzhou. Because of its characteristics, events such as gas pollution do not exist in this peaceful part of Guangzhou; therefore, experiencing Chinese New Year Celebration such as the Chinese Lantern Festival can be unforgettable!

A walk on the long boulevards of Shamian Island is like walking on a long garden. On the southwest side of Shamian, you can enjoy many bars, cafes, and restaurants in a row with the view of the Pearl River at your sight. This island is a great place to get away from the hustle and the bustle of crowded cities. 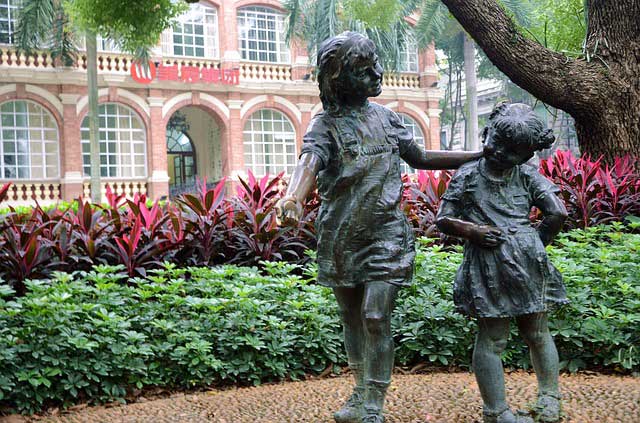 How to reach Shamian Island?

Shamian Island is located in Guangzhou city. You can reach there by different transportation means such as taxi, bus, and metro.

You can take a taxi from the Guangzhou Railway Station to get to the island directly. The fee would be around 28 Yuan, but keep in mind that there is also a bridge toll that needs to be paid.

Get on the Sightseeing Bus Xiguan Style directly to Shamian.

Get on Metro Line 1 or 6 to Huangsha station. Leave the station from Exit F and you will see a bridge that can take you to the island.