Meteora – The Most Impressive Holy Site in Greece

Added to wishlistRemoved from wishlist 0
Add to compare
From: $653.00

Meteora is one of the precious complexes with huge rocks. It is named after the monasteries on top of the sky as it means Suspended in the air. Meteora is a mixture of nature and historic constructions, and although it has rare species of birds and flowers, it is mostly known for the monasteries on top of the cliffs. These monasteries are the second most important monastic community in Greece. Kalambaka, the city of Meteora, is a historical city too and has many historical things, including relics of an ancient Greek temple, which is assumed to be related to the God Apollo. It is believed that Stagi, the last name of Kalambaka, was a significant city at the time of the Byzantine empire. However, it was burned down by the German soldiers in World War. By moving around the pillars, you can find a village. Kastraki, AKA Eagle’s nest, is between two giant pillars where you can rent a hotel room and enjoy the proximity of nature and Greek traditional lives. 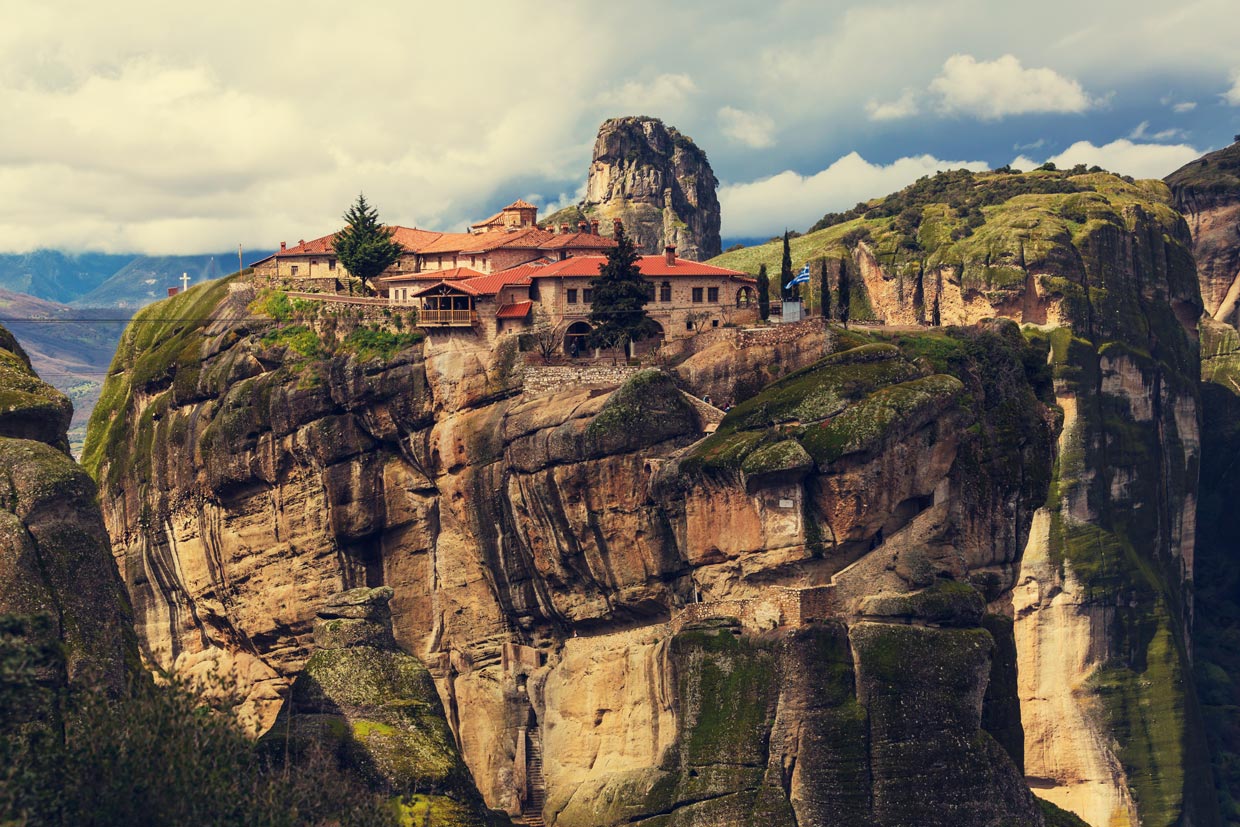 Monasteries were built over time, and at some point in history, their number reached 24. Over time, things happened, and only 6 of them remained, which are now part of the UNESCO World Heritage. Meteora’s most essential constructions were built by monks who lived in the cave. In years of hard climbing with ropes and ladders, monks carried construction materials with themselves to build some of the most amazing places in the world. You can imagine how many lives were lost to build them. One of the most important things to remember is that monasteries are holy places of peace. Therefore, respect has the value of gold. When entering them, you will need to pay 3 Euros, and also you have to follow the dress code which for women is a skirt, and for men, it is long pants and shirts. Also, please DO NOT take pictures of the monks without their full permission. The distance between monasteries is a bit long, and the best way to enjoy them is probably a combination of driving and hiking. If you think they are not worth all the effort, just wait until you see the area’s view from above, which is worth hundreds of pictures. If you want the best place in the world to watch the sunset from the top of a rock, Meteora is the right place for you.  Furthermore, toilets are not modern there, so it might be a good idea to visit a bathroom in town before visiting them. 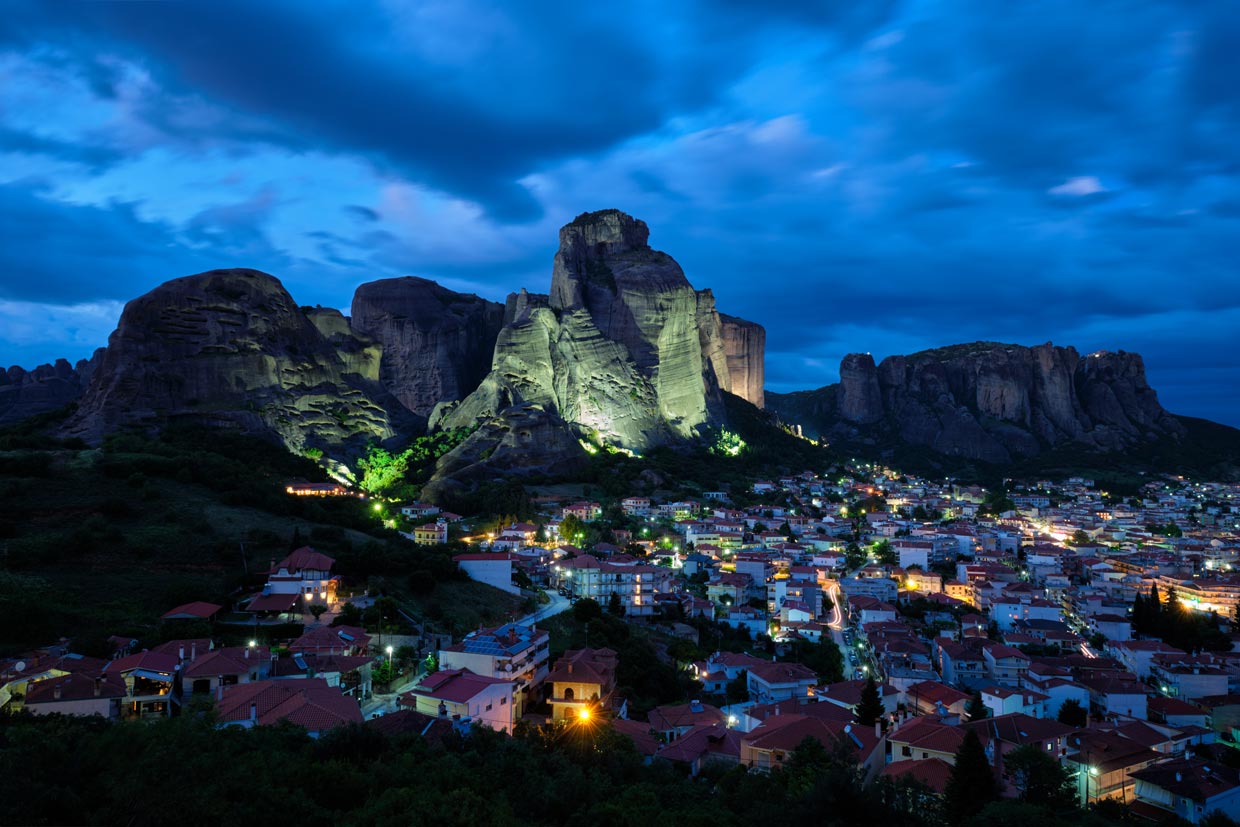 The oldest and the biggest one comes first. Great Meteoron is also the most visited monastery among the 6. It was built in 1356 BC and had a museum where you can understand the importance of the orthodox church in Greece’s revolution against the Turk’s army. Besides the perfect opportunities of taking photos on top of the rocks, paintings on the ceiling and skeletons on the walls can be a good attraction for history lovers. 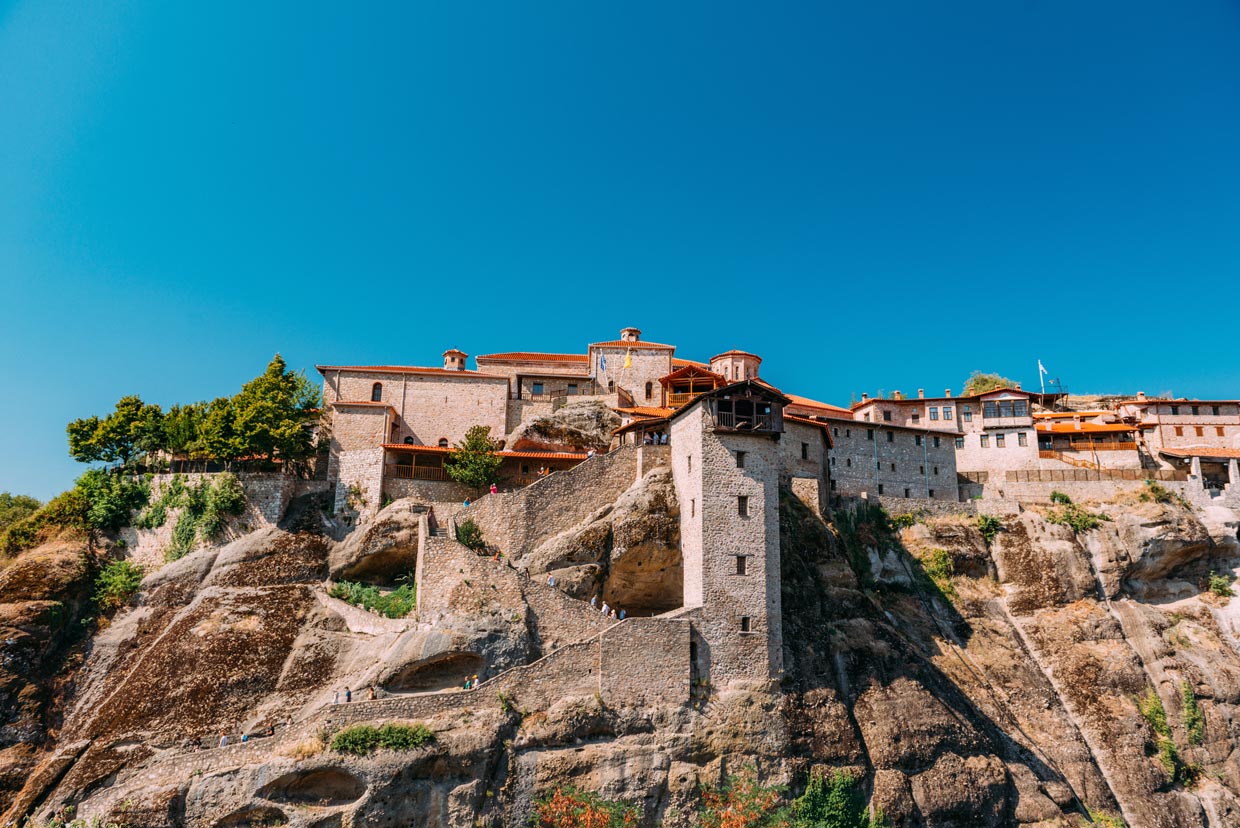 Some tourists have mentioned this place as a bridge between heaven and earth. You will see the reason for this only when you climb 375 meters up. You can find lots of panoramic photography opportunities in Varlaam, which was found in 1517 and has a museum where you can see monks’ clothes in those periods.

Although it may be a little dangerous for kids due to not having enough fences, Holy Trinity owns one of Meteora’s most beautiful scenes. It may be enough to point out that one of the James bond movies had a scene in this place. Moreover, Holy Trinity is the hardest monastery to climb, so it might be a good idea to use a car to reach it. 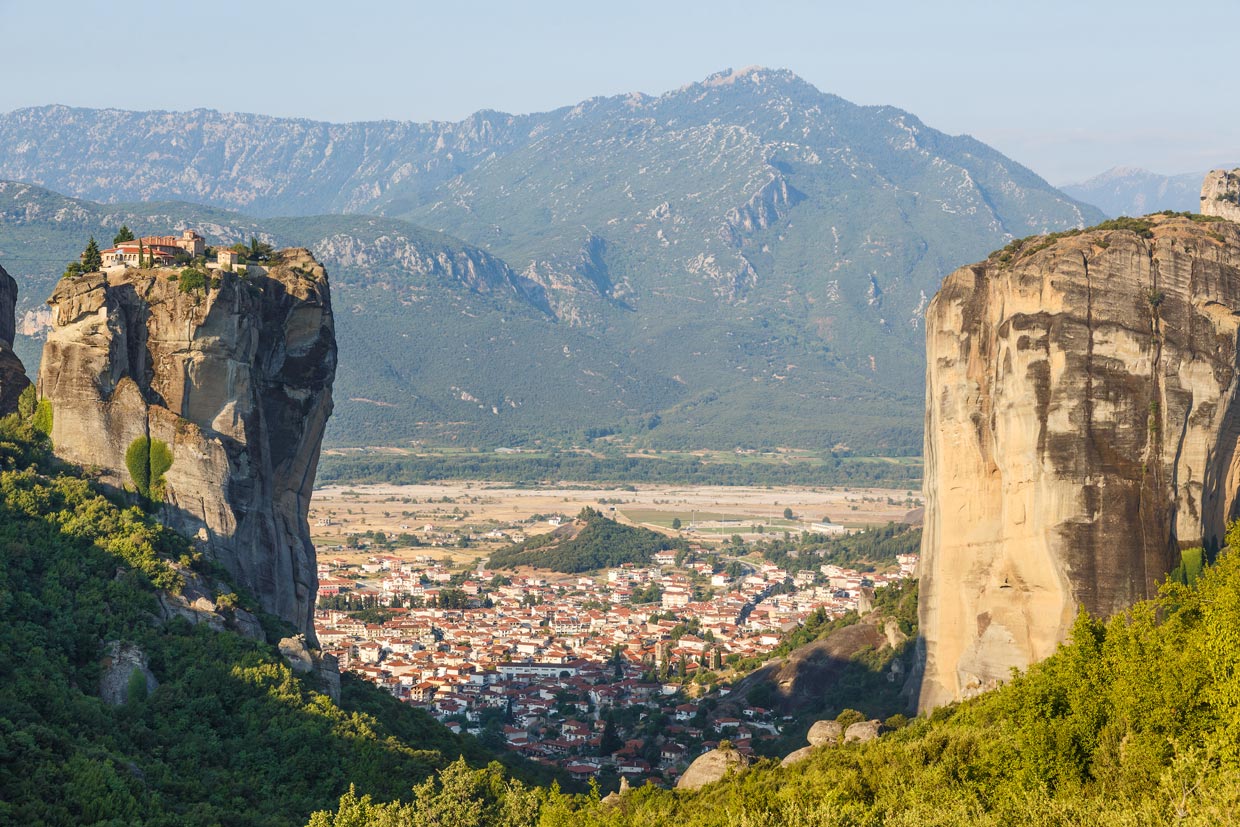 If you plan to stay in Kastraki, St. Nicholas is the nearest monastery to you since it is just one Km away. One of the interesting facts about this place is that the rock below this monastery is so thin, and they had to build this monastery on three floors to enlarge it. Thus, this is the smallest monastery among others. If the perspective does not impress you, the construction will certainly do. 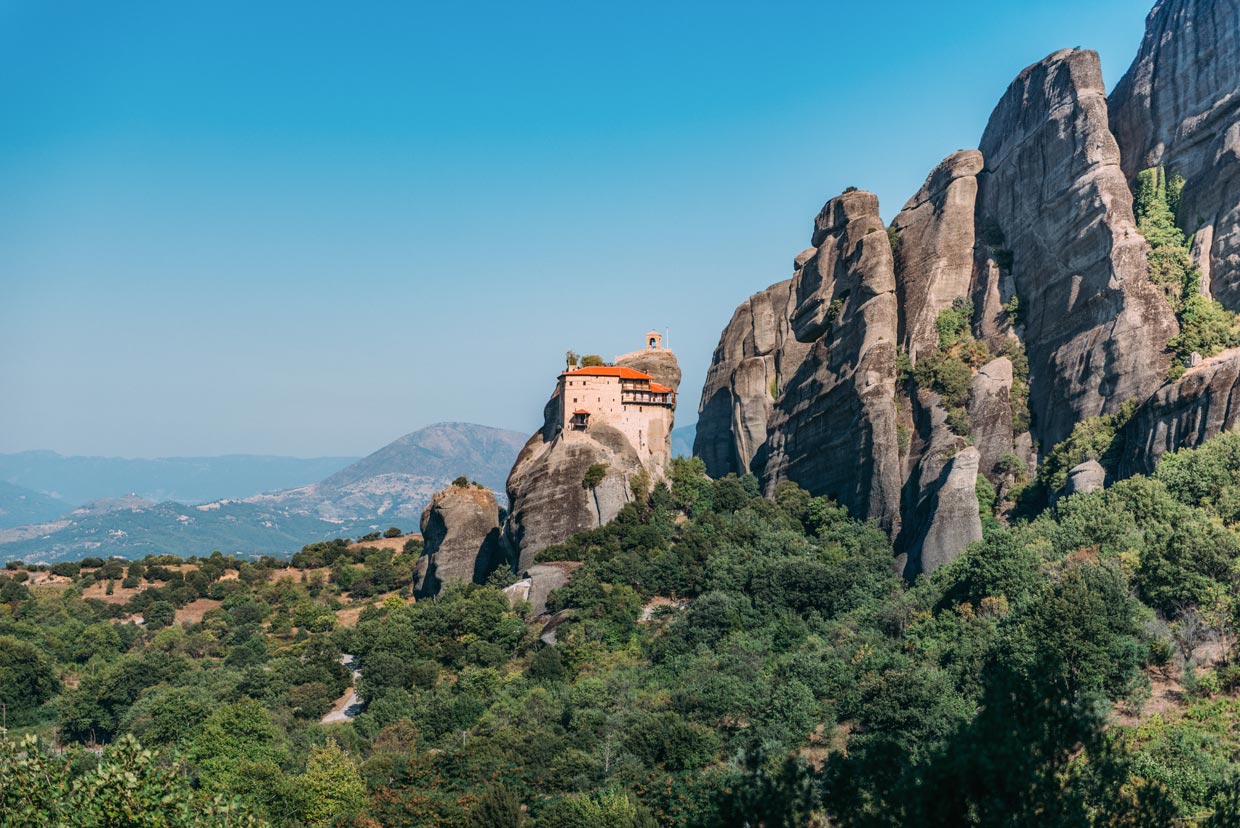 Let me introduce you to my favorite monastery, St. Barbara. Since nuns inhabit it, you can expect to see some women’s taste in this place, and you will surely do. You only have to take a moment and look at the gardens of this place, which are so amazing. The nuns are so friendly and explainable as well. 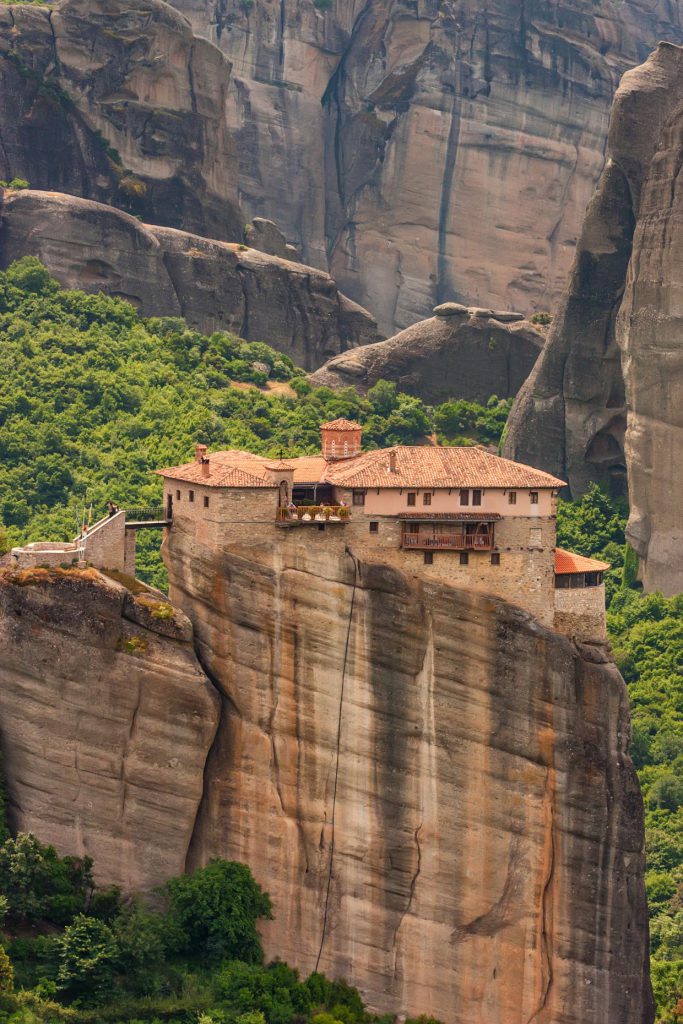 St. Stephen is the easiest monastery to reach and requires almost no hiking. Like Rousanou, St. Stephen is also inhibited by the nuns. On the top rocks of this place, you can see the city from the sky’s point of view, which is impressive at night. The nuns of this place are quite interesting as they tell you great stories and show you the historical objects. 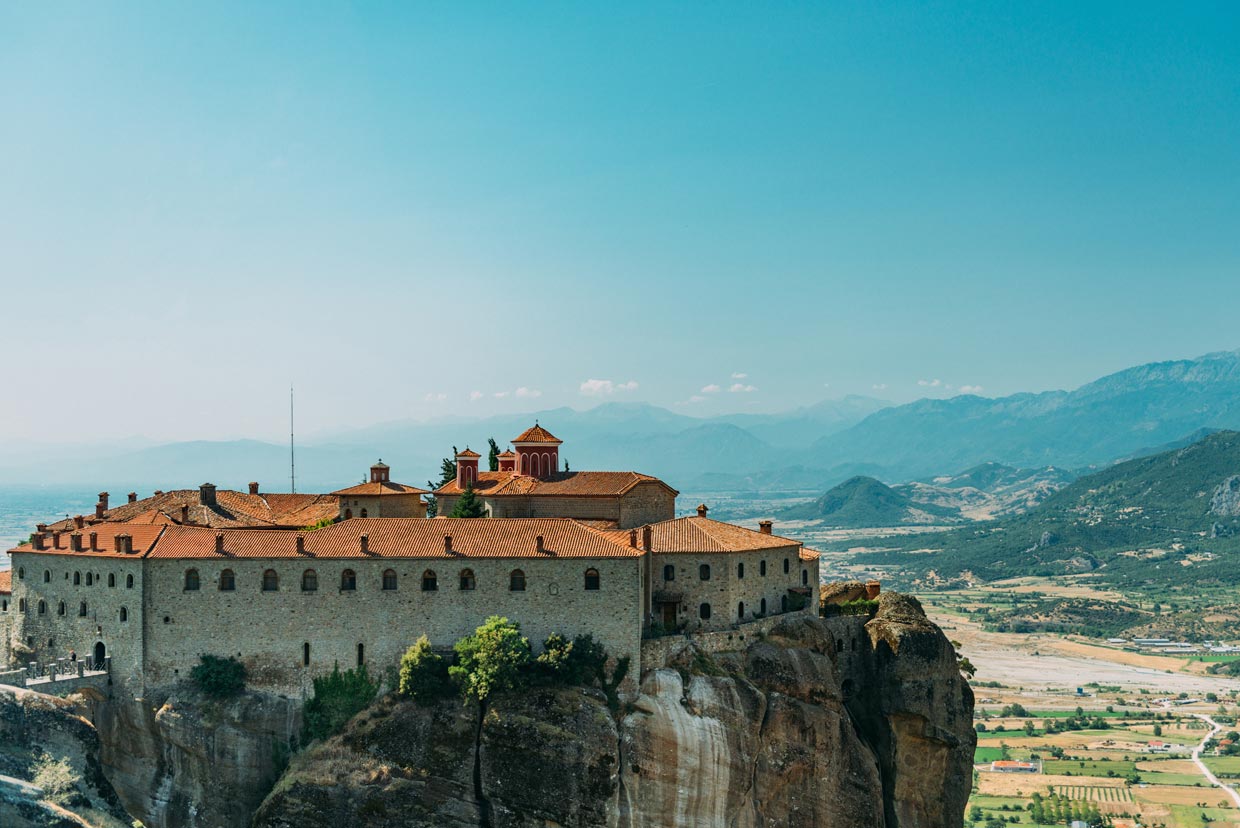 There is a spot in the city that does not get enough attention. There is a church in the town that belongs to Byzantine’s age and has been there for almost 25 centuries, about ten centuries older than the oldest monastery. However, it will remain under the shadow of the monasteries. Kastraki is also a place of history, where the nature and traditions of Greece bond together. Most of the hotels are in the main street of Kalambaka, where you can find various hotels. You can choose where to stay by looking at your budget and choosing the luxury or the inexpensive ones. Also, you can find hotels in Kastraki village. They are mostly cheaper and smaller than those in the Kalambaka, but they give you incredible sights of the rocks since they are near them.

After exploring the monasteries, food can be an exciting option for Meteora as you can find authentic Greek food in Kalambaka. Moussaka, saganaki, gigantic beans, Valia Calda, and so many other names are the foods you can easily find in most Meteora restaurants. It is not hard to find restaurants, and most of them serve quality dishes.  Also, Meteora’s food can be seasonal due to the ingredients that can be found in the place. For example, in summer, foods made with vegetables are more, but meat is much easier to see in the winter. Greek cuisine contains slow cooking, meat, and lots of olive oils. 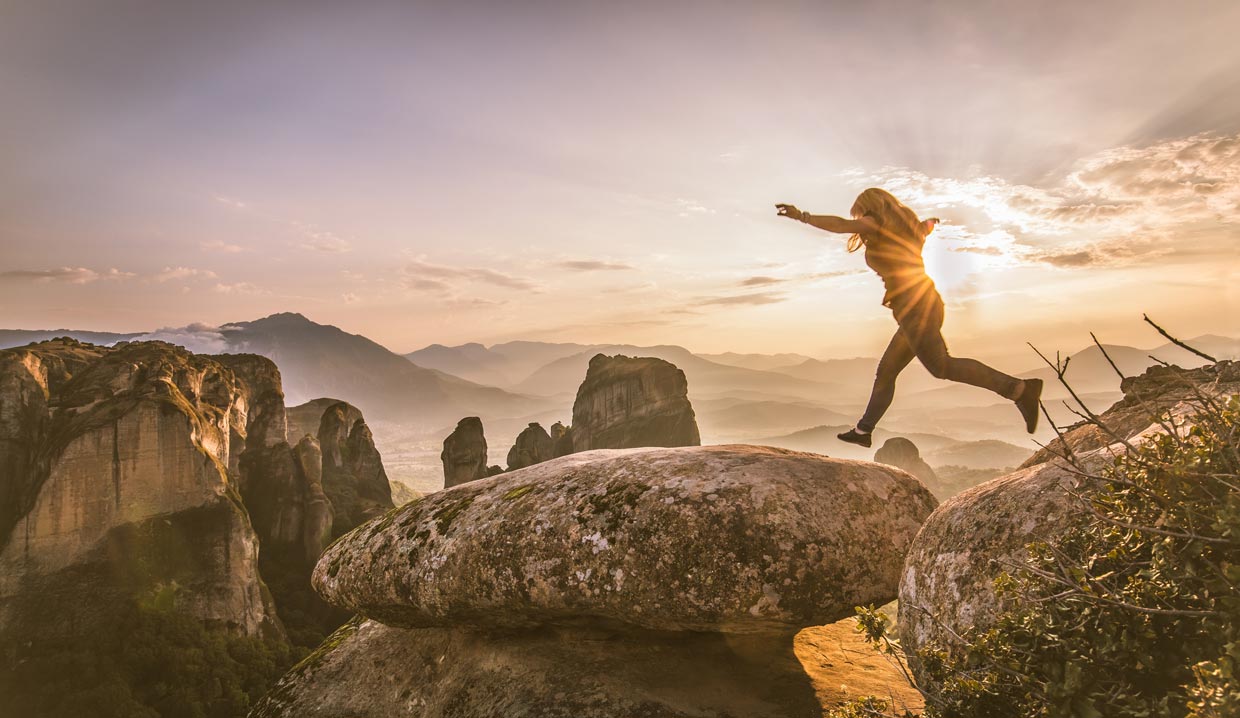 July is the hottest month in Meteora with an average temperature of 27°C (81°F) and the coldest month is January at 8°C (46°F). Travelers who aim to visit Meteora won’t face any bad climate situations. The weather is cool for many people. To clarify the situation of weather and to have an idea about the temperature, here we made a table of Meteora’s monthly temperature average:

Try to see the love in nature and enjoy the love of nature. Meteora can be exceptional in photography, but you have to enjoy the moment as well. So try not to get too busy taking photos and listen to the history of this place, the history about the monks dying to reach the top of monasteries. Make sure you pay enough attention to the belief that has been with the monks and nuns of these places and monasteries’ roles in the wars. Meteora is a place of history, perfect views, and beauty in one sentence.