Lizhuang Ancient Town of Yibin is a unique old town in Sichuan, China. The town has preserved its exceptional ancient atmosphere from Ming Dynasty and Qing Dynasty era.

Lizhuang Ancient Town is an excellent place for foreign visitors to gain a more profound knowledge of the Cantonese historic culture in China. It is located in Lizhuang Ba of Sichuan Province close to Yibin city (19 kilometers – 12 miles). Let’s find out more information about Lizhuang Town with Tripways.

Lizhuang Ancient Town is situated at the base of the Yangtze River, so it is referred to as The First Town of Yangtze. The city is not only famous for its well-kept historical relics but also it is known as one of the cultural centers during the Second Sino-Japanese War (1937 to 1945).

Back then, due to the conflicts between the two armies, many people fled the large cities and resided in inland China. During the war, there were four anti-Japanese culture war centers in China, which were Lizhuang, Chengdu, Kunming, and Chongqing. In 1940, so many well-known Chinese scholars and experts moved to Lizhuang for better protection.

What is inside the city?

The city sits in a remote location and has a population of around 12,000 people. The highlights of the city are its history and well-kept structures from the Ming Dynasty (1368 to 1644) and the Qing Dynasty (1616 to 1911). These structures include ancient alleys, courtyards, ancestral halls, and temples.

The layout of the city is filled with narrow lanes with blue stones pavement, high thresholds, wooden attics, and giant wooden gates alongside many well-persevered temples and buildings. The city layout has been the same since the Ming and Qing Dynasties and conveys an ancient feel.

The main street here has stone pavements, and the buildings sitting on both sides of the street are in Qing style architecture. These buildings are pretty tall and they are decorated with carved windows and gates. Also, there are narrow lanes between them.

You can see beautiful sculptures and carvings on the old structures here, which are truly exquisite. There is a dock in Lizhuang Ancient Town, which is connected to the main street by winding stone stairs. Lizhuang Ancient Town is rather unique in China as there are only a few well-kept old cities like it. 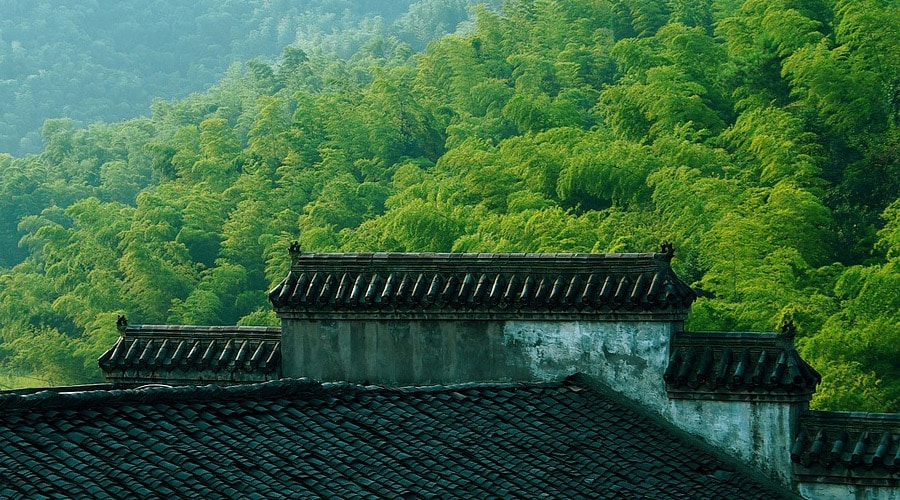 There are mainly six attractions that every visitor should not miss:

The first two, Lamb Street and Xizi Lane, are the best places to feel the atmosphere of Ming and Qing Dynasties. The others are called The Four Wonders of Lizhuang. These four attractions are listed by a great modern Chinese architect Liang Sicheng.

Xizi Lane is more than 60 meters (197 feet) long and around 2.5 meters (8 feet) wide filled with many buildings remaining from Ming and Qing Dynasties. Almost all the structures here have the same look. The structures are wooden but the eaves of the second-floor projects over the lane and almost covers the whole area over the narrow lane. Because of this, you can only see a narrow line of the sky. That’s why this place is also called Sight of Narrow Sky.

The Luoxuan Temple (usually known as Stone Snail Hill) has large stones resembling snails and it is located in the south Lizhuang in front of a rice field. There is a pool here in the base of the hill called Dragon Pool.

The Wenchang Pavilion of the temple was constructed during the Ming Dynasty in 1596 to memorialize Emperor Wenchang. The main pavilion has an octagonal shape that is around 12.5 meters (8.2 feet) tall. The Temple incorporates a history of over 400 years.

This place is the Zhang family ancestral hall, which has fifty windows inside. The hall is made of Nanmu, which is an expensive and high-quality type of wood. There are two cranes carved into each window that would be 100 cranes in total. That is the reason behind the name “Hundred Crane Windows”; however, only 24 windows have remained today, unfortunately. Each side of the windows is around 2 meters (5.6 feet) and they have a width of about 60 centimeters (2 feet) in which, beautiful cranes and clouds carved on.

Nine Dragons Stone Tablets, also known as Huiguang Temple, was built in 1831 during the 11th reigning year of Emperor Daoguang in the Qing Dynasty. There are two courtyards here and the main courtyard contains the Kuixing Pavilion alongside other pavilions and wing rooms.

In the temple, you can also see tablets carved with the pictures of King Yu while he combats the flood. There is a dramatic stage inside the temple that is among the best-preserved old dramatic stages in Sichuan Province.

Lizhuang Ancient Town has a subtropical monsoon climate, and its average temperatures vary each season. Summers are mostly raining but there are not many hailstones and rainstorms.

The best time for visiting

May, June, July, August, and September are the most favorable times for visitors.

How to get to Lizhuang Ancient Town?

To reach Lizhuang Ancient Town, you can take a bus from nearby South Shore Bus Station in Yibin City.

It should be mentioned that the Lizhuang Ancient Town is not too far from Chengdu and Chongqing (around 280 kilometers – 174 miles); therefore, if you have a plan to visit Chengdu, you can reach the town easily. Do you have any more information to share about this town? Feel free to leave your comments for us. Also, if you need more information about Lizhuang, send your questions to us and our professional guides will reply as soon as possible.