Among the top highlights of the Ho Chi Minh Province, the Saigon Church, now known as the Notre Dame Cathedral Basilica of Saigon, is notable. This building has seen many repairs and renovations because of the damages due to the termites and the wars in Vietnam. However, it is still standing and acting as a place of worship. Aside from the beauty of the building’s architecture and beautiful glass windows made in France, the tear that was seen on the statue of the Virgin Mary has brought many visitors to this iconic church.

The original constructions of the Saigon Church took place between 1863 – 1880. The primary construction material was wood at that time, but termites quickly damaged the building. It was then decided to make the reconstructions with bricks and stone with only a minimal amount of wood to avoid further infestations.

When the decision for a repair or reconstruction was made, a designing competition was held, which was won by Jules Bourard. He built the new Cathedral with its new expansions to resemble the Notre Dame Cathedral. But the church was still not called by this name until 1959 when the statue of “Peaceful Notre Dame” was placed at the site.

The style used for the new building was the same Romanesque and Gothic style, and its first stone was placed in October 1877 by the hands of Bishop Isidore Colombert. After all the years of building and rebuilding, a completion ceremony was held, in April 1880. Several years later, there was another addition to the building as two bell towers were erected in 1895. Most of the materials for the Saigon Notre Dame Cathedral Basilica were made in Toulouse and Marseille and shipped to Vietnam. 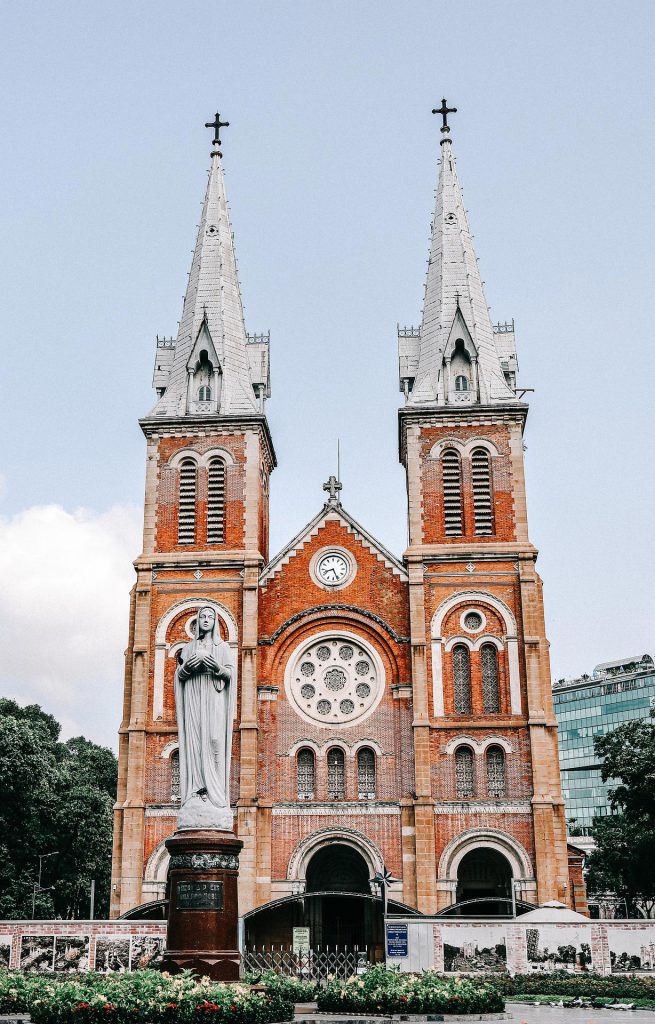 The Status of the Virgin Mary and the New Name

In 1959 a Marian Congress was haled at the Vatican, which resulted in ordering a statue of the Virgin Mary to be placed at the church several months later. Sometime later and after the statue was placed, the name was changed to Notre Dame Cathedral Basilica in 1960. Before the installation of the figure, this building had many names over time.

In October 2005, several witnesses saw a single tear came down from the right cheek of the statue of the Virgin Mary. The Catholic population of Vietnam and thousands of foreign visitors flocked to the church to see this miracle but soon after the building and surrounding areas had to be closed for investigations. Although the mark of this miraculous remained for a week, the catholic church of Vietnam ultimately refuted this phenomenon as a miracle.

Currently, the Saigon Notre Dame Cathedral Basilica is under massive renovations that began in August 2017 that was expected to finish in June 2020, but the building remains open for prayers. It may take a little more time for the building to be officially reopened for tourists, but you can still visit when it is open for sermons.

You can explore the areas around this cathedral or go inside for the duration of the ceremonies, but the visiting times are limited. Keep in mind that you are required to wear an appropriate outfit during your visit to respect the sacred grounds of this place of worship.