Located in the south of Sichuan Province, The Leshan Giant Buddha is the largest Buddha statue in the world Inscribed in the World Heritage List by UNESCO.

The Leshan Giant Buddha is a monumental statue of Buddha carved in the cliff of Lingyun Mountain (in Chinese: língyún shān means “the mountain that rises in the clouds” ). The statue is located on the east bank of the Min River in the Mount Emei region, south of Sichuan Province, China. As the legend says, it owes its existence to a Buddhist monk, named Hai Tong, who wanted to protect the sailors taking the perilous confluence of the three rivers (Dadu he, Qingyi Jiang and Minjiang) and to prevent flooding in the city of Leshan. (Video Credit: Milosh Kitchovitch)

In ancient times, the water at the joint of the three rivers was very intense and there were always capsized boats. To slow down the water flow, Monk Hai tong recruited artisans to build the Giant Buddha.

This site is the first place of establishment of Buddhism in China (from the first century of our era). Inscribed in the World Heritage List by UNESCO in 1996, The Giant Buddha is the largest in the world before the twentieth century and the highest statue of Maitreya (Maitreya will be the next Buddha to come when the Dharma, or the World in the Indian religions, will have disappeared).

Facts About Giant Buddha in Sichuan

Leshan Giant Buddha is famous for its incredible size. This seated Buddha, which is carved into the red rock wall on the hillside and turned face to the river, is 71 meters high and 28 meters wide at the shoulders.

The head of Buddha is 14.7 meters high. Each eye measures 3 meters long and each ear is 7 meters. The middle finger of Buddha’s hand is 8 meters long. Between knees and insteps is 28 meters. Its insteps can hold over a hundred people. 1021 small hair buns rolled up to adorn the head. The head reaches to the mountaintop and its feet stands next to the river. There are 1051 spiral loops on the Buddha’s head, and they were all carved onto the Buddha’s head.

On each side of the statue, there are 8-meters-high warriors. Behind them, there is a set of two hills with subtropical vegetation and coniferous forests that are over 100 years old containing caves, pagodas, pavilions, gardens, and other temples. One of the most spectacular of the pavilions is the Lingbao Pagoda dating back to the time of the Tang Emperor. 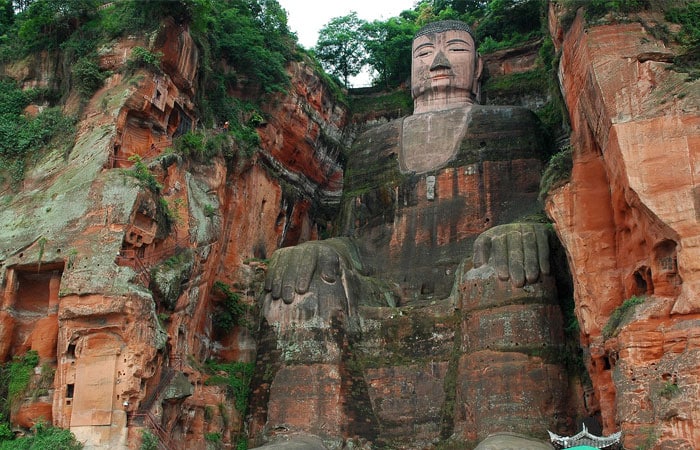 Design Features of the Giant Buddha

The weather of Leshan is always humid. The Giant Buddha is located under the open air, but how the statue is preserved under this condition? Artful design is the answer! There is a delicate and invisible drainage system, which has played an important role in protecting the Giant Buddha from corrosion.

On the Buddha’s head, there are 18 layers, and the 4th layer, 9th layer, and 18th layer have one cross drainage. In fact, the drainage from the left side in front of the chest is connecting to the back drainage of the right arm and a cave on the backside (the side near the mountain) connects the two ears. These caves and drainage have composed the scientific drainage that is a moisture-proof and ventilation system.

The best time to visit the Leshan Giant Buddha is from March to November. Spring is very beautiful as many flowers will blossom and the cloud sea on the mountaintop is extremely impressive and attractive. From May to June, the area has many sunny days, the weather is not very hot, and the temperature on the mountain is cooler than the city center. The weather in autumn is very clear and it is a great time to see the cloud sea, sunrise, and sunset on the summit.

Leshan’s local snacks are very famous and delicious for tourists; so, why not taste the Chinese food if you have enough time? Just outside of the scenic spot, there is a 500m street called Jiading Fang. Tourists can find all kinds of local snacks and local specialties there. The street also has many tea houses and bars and it’s a good place to take a rest.

For those who have more time or will stay overnight in Leshan, it’s highly recommended to search for delicious local food in the city center, like Zhanggongqiao Snack Street Fujie and People’s Park. The bean curd jelly, Malatang, Leshan barbecue as well as the Qiaojiao Beef and spiced crispy duck are some of the delicious local food of Leshan.

How to Visit Leshan Giant Buddha

You have two ways to go to visit the Giant Buddha:

The first is climbing on the mountain and watching the Buddha from a very close distance. In this way, you enter into the scenic area, and through Nine Bends Plank Road, you get to the Buddha’s feet.

If you don’t want to climb on the mountain or want to see the panoramic view of the Buddha, you can take a boat to see the Giant Buddha. For taking a boat, there are two ways:

Taking a boat at Tieniumen Pier to Sun Island

The first one is to take a boat at Tieniumen Pier to Sun Island, a little isle facing the Giant Buddha. The distance between them is only about 500 meters, and the ticket for the boat is ¥1 per person. Sun Island is very popular among local people. They love to barbecue and just drink tea on the island while enjoying the good weather.

Another way is to take steamship or speedboat. By that, travelers can arrive at the front of the Buddha and enjoy the panoramic view from a very close distance. To take the steamship and speedboat, there are two piers:

One is Baxiandong Pier, which is next to the scenic area, and travelers can go there by Bus No.3, and get off at Baxiandong station (the last station of Leshan Giant Buddha scenic spot).

Another one is Leshangang Pier, which you can find it across the river facing the Giant Buddha. The ticket for steamship is RMB 50/person and the speedboat is RMB 70/person. The cruising time is about 30 minutes; so, we only recommend this way for those who have a few times or who prefer a very easy trip. 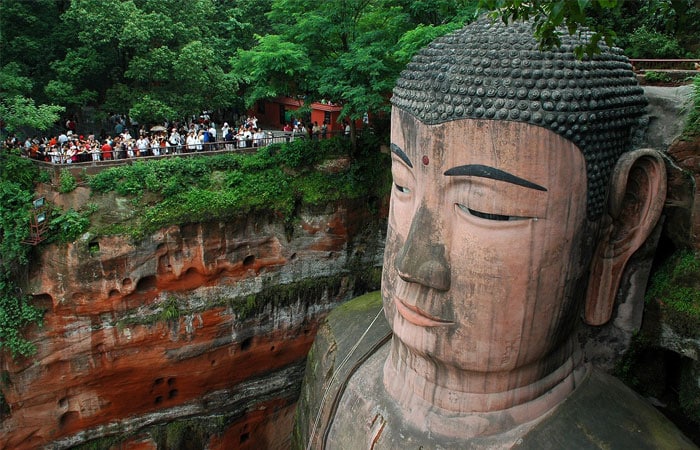 In the entrance of the Leshan Giant Buddha Scenic Area, both Chinese and English tour guides can help tourists.

We recommend you to avoid the “Golden Weeks” in China, including Spring Festival, May 1 to May 7 and October 1 to October 7. During these times, the domestic tourists visit the site and the scenic spot is highly crowded; therefore, travelers usually will have to queue for hours to get to the Buddha’s feet. Do you have any more information to add? Share your experiences and thoughts with us. Besides, if you have any questions about the site, feel free to leave them and we will reply as early as possible.

3 Day from Marrakech to Marrakech Tour via Sahara