According to geologists, minerals such as quartz, feldspar, and mica are the main ingredients of El Peñon. Historically, the greatness of El Peñon made the inhabitants of this region worship the rock like God. Not to mention that, just like the worshipers, there were also others who saw it as a rock sent by the devil.

El Peñón de Guatape, is a landmark inselberg in Colombia. It has always fascinated us to observe the world from atop a large rock, so you can find out by climbing El Peñon. However, you need to reach the border between Guatape and El Penon first in Colombia. El Peñon, which resembles a large building built by nature, weighs about 10 million tons and is believed to have been constructed during a volcanic eruption about 200 million years ago.

During the 1900s, the massive rock that weighed ten million tons was viewed as a nuisance rock by local farmers, one that was similar to rocks they regularly found in their fields. The first attempt to climb El Peon de Guatape was in 1954 by a group of friends, allegedly encouraged by a priest. They used boards wedged into cracks to ascend, and wooden stairs were built to enable others to ascend soon after this very first discovery.

Despite the difficulty of climbing the huge rock, the outstanding views of the fields surprised them. A newly discovered plant, Pitcairma Heterophila, was another happy ending of that climbing. Very soon, Pitcairma Heterophila became a favorite thing for many people who were trying to spend some time over there. 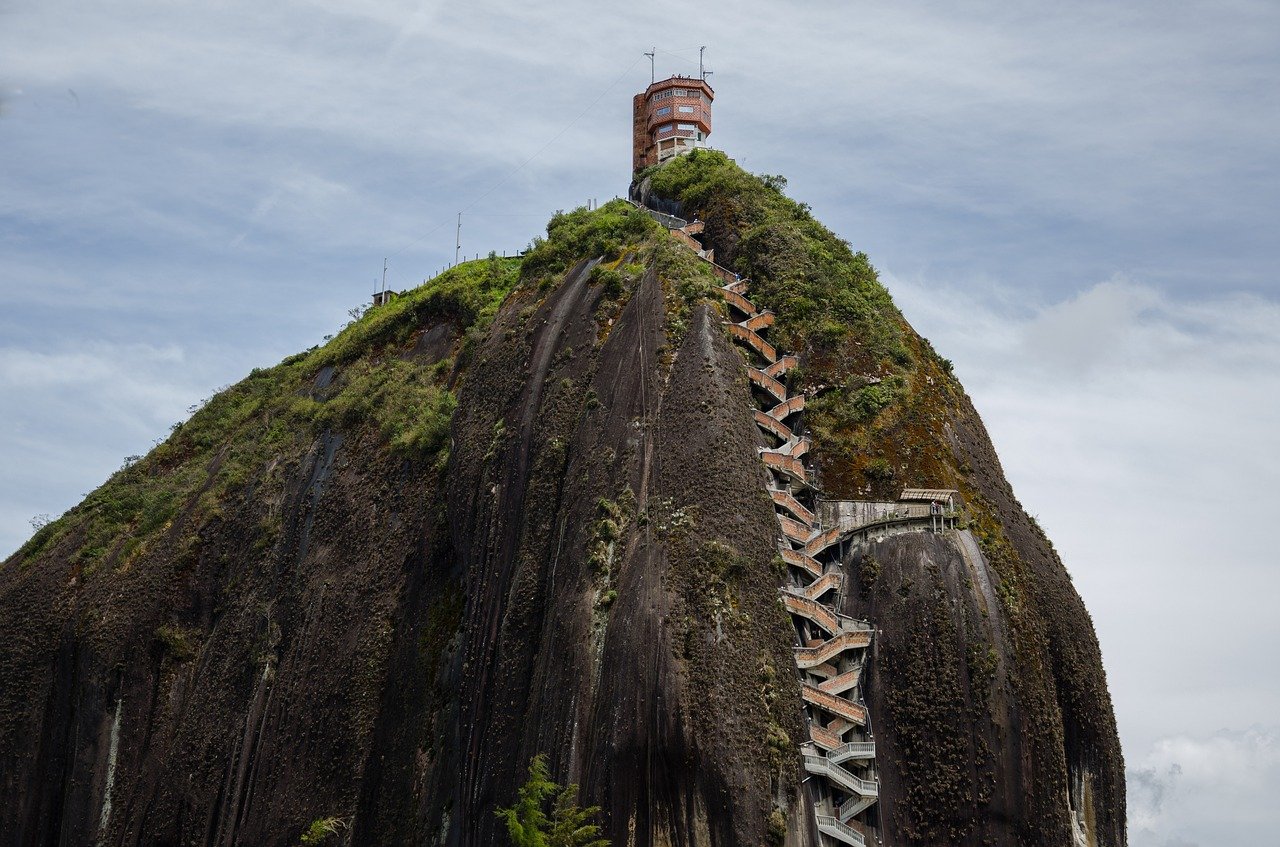 Which City Owns the El Peñon?

Trying to find out which city owns El Peñon, it became apparent that none of them! It is interesting to know that El Peñon officials prevented the city officials of Guatape from engraving their city’s name to the stone and taking ownership of it. You can find the first letters of the city of Guatape carved into El Peñon on one day if you happen to visit this site.

How to Get to El Peñon?

For the convenience of tourists, there are two air and land routes to reach El Peñon. If you are a fan of land travel, then fasten your seatbelts for a 10 to 15 hours trip! But if you want to be one of the conquerors of El Peñon sooner, you can choose air travel that only takes 1 hour.

Get ready to climb 650 steps! The number of stairs is indeed relatively large, but the result is a view of paradise, which is certainly worth it. Let’s imagine the image you will see from the top of El Peñon.

Imagine, after climbing 650 steps while you are out of breath, you will see small islands floating on the water and jet skis moving around them. Since this rock is located on the border of two cities, on one side, you will see an old city (which is Guatape), and on the other side, you will see a modern city (El Penon). Above the rock, there are many cafes, canopies, and chairs that you can relax after a hard walk. So, in a nutshell, it will be worth it!

It reaches 2,135 meters above sea level at its highest point along the southeast (rear) side. It takes 659 steps to reach the top of La Piedra Del Peñon (the Spanish word for “The Rock of Guatapé”). The view from there is stunning, beyond your imagination. 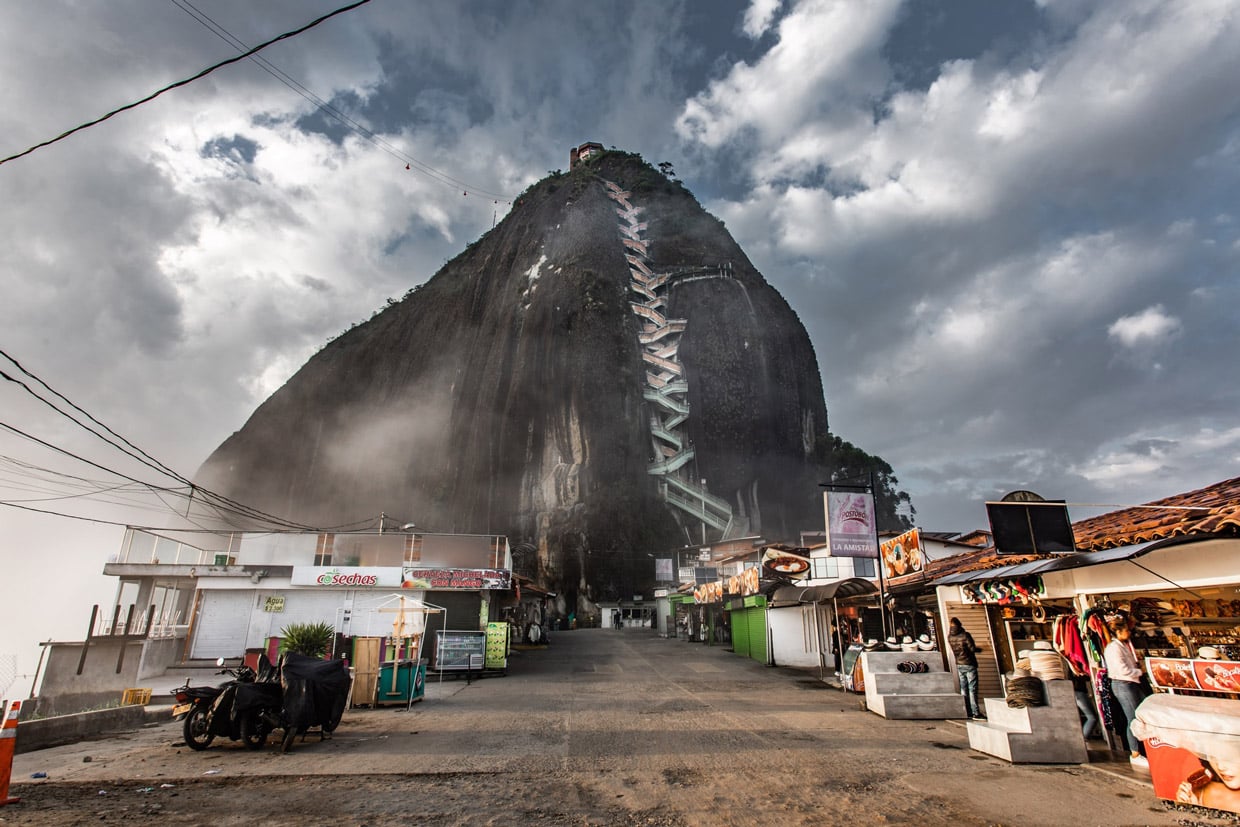 How Long Do the Stairs Take?

The massive crack in the rock seems to be held together by 650 steps that criss-cross as if a zipper. The stairs are quite an attraction themselves. Though 650 stairs may appear to be a large number, they are rather small, and the climb up to the top of La Piedra Del Penon takes only 10-15 minutes. Many children and older tourists climb up to the top daily, so don’t let the height or stairs keep you from seeing this spectacular viewpoint.

A couple of hours at the top usually suffices for most people because they want to rest and also enjoy the majestic view. Even from its pictures, you can understand that leaving the rock would not be the first thing that comes to your mind. You want to spend hours of hours enjoying the fresh air and the absolute beauty. Many chairs, umbrellas, and tables are provided at this viewpoint, in addition to a cafe and refreshment stand, which makes it a great place to relax during the day. 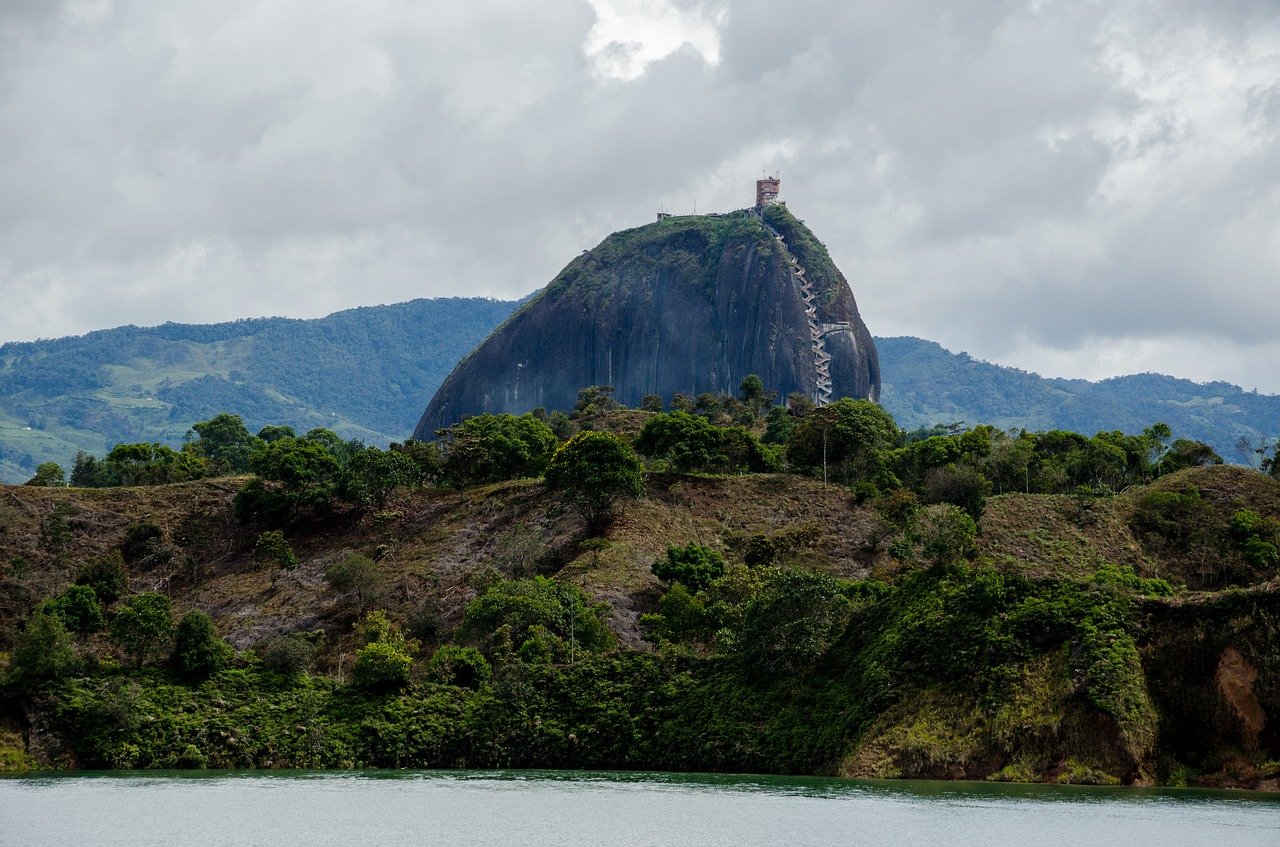 There are hostels and guest houses in El Penon, but most people book a room in Guatape, which offers adventure activities and many hostels.

Guatape has such lovely buildings. They feature 3D paintings depicting scenes of mountains and villages. You feel as if you are walking through an art gallery as you pass each building. Many visitors who have been there described it as an “Art Gallery.” It shows that there is something special in this wonderful land that everybody is shocked about it. The best way to get to La Piedra Del Penon is by taking the tricycle from Guatape, and that’s what I suggest, too, as Guatape is a lovely town to stay in.