The Roman Catholic Aachen Cathedral is one of the oldest cathedrals in Europe, located in the city of Aachen, and constructed by order of Emperor Charlemagne. The cathedral is the first site in Germany that classified as a UNESCO World Heritage Site.

This Roman Catholic Cathedral was known as the Royal Church of St. Mary in Medieval times. The Church of Aachen was built by order of Charlemagne. It is interesting to know that Charlemagne is buried in the same church that he built years ago.

Charlemagne, the builder of the Cathedral, was an active and diligent person who loved the Cathedral of Aachen with all his being and considered it the fruit of his life. For this reason, he tried really hard to gather the most valuable religious artifacts in this Cathedral during his life and make them a collection. Among the things he collected were the robe of the Blessed Virgin Mary, the loin-cloth (which is the loin-cloth that Christ wore when He was crucified), and the clothes that Christ wore in infancy.

As a result, in the Middle Ages, when Catholic rule reigned throughout Europe and religion was very powerful and popular, relics from various European countries such as Sweden, Germany, Austria, England, etc., were attracted to this church to see the works collected by Charlemagne up close. Because these works were of indescribable value, they were shown every four years. Today, these works are displayed in the same way.

Charlemagne was also highly esteemed and respected after his death. When he died in 814, he was buried in the Cathedral. It should be mentioned that when the king of that time opened his tomb about 200 years later, he found Charlemagne’s body on a marble throne with royal robes and the Bible in his lap. There is even a painting of this state, which is located in the large room of the town hall. In 1165, at the request of Emperor Frederick Barbarossa, Charlemagne was consecrated as a saint.

When the Barbarossa’s Chandelier was built, it was one of the biggest chandeliers ever built. This chandelier is super unique when it comes to its style and beauty. Its bronze ring is about 4 meters in diameter. Frederick Barbarossa commissioned the chandelier to celebrate the consecration of Charlemagne. If you are lucky enough to visit the Church of Aachen on the days of celebration or the holy days, you will see that the candles of this chandelier light up and give it a spectacular view. 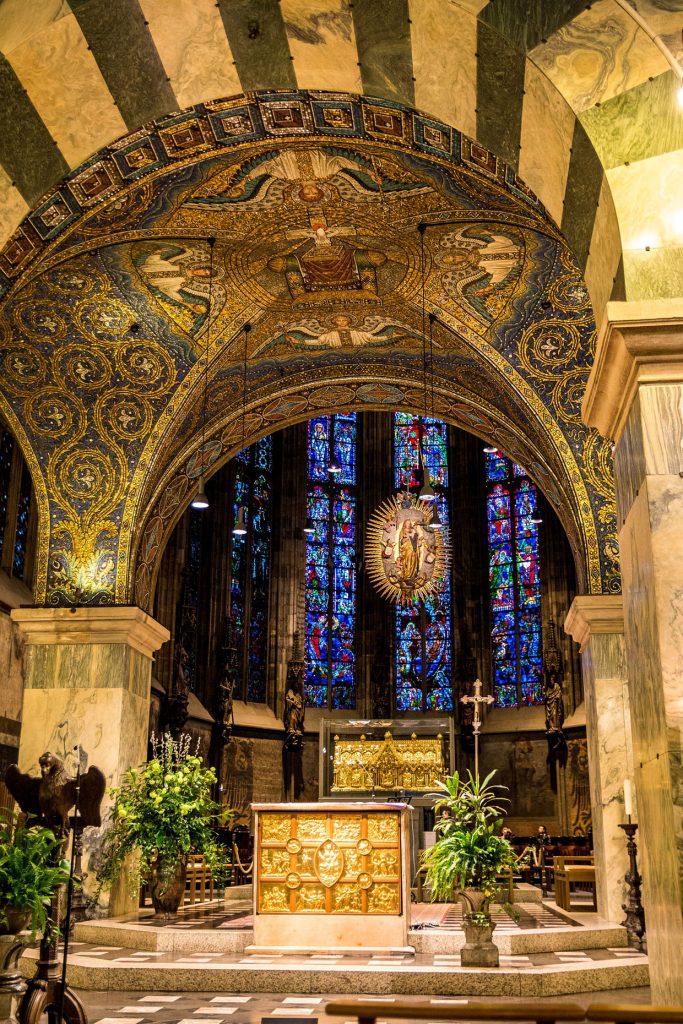 The way this Cathedral was architectured was exciting and remarkable considering the time of its construction. The tasteful architect of this building has designed its core in the shape of an octagon. The design is inspired by Roman churches. This beautiful geometric structure has caused the Cathedral to be connected to another small church.

With the passage of time and the entry into each of the various periods, such as Gothic or Baroque, various additions were added to the Cathedral and multiplied its glory. So when you walk inside the Cathedral today, you can see beautiful structures from different periods. However, the most striking thing ever built in the Cathedral is its octagonal heart which was made out of marble. In addition, the Romanesque Gilded Shrine is one of the most radiant parts of the Aachen Church as well.

Over time, the Cathedral expanded and grew larger and larger. Several small churches were added to the Cathedral in the 15th century to accommodate the large number of relics coming to Aachen. 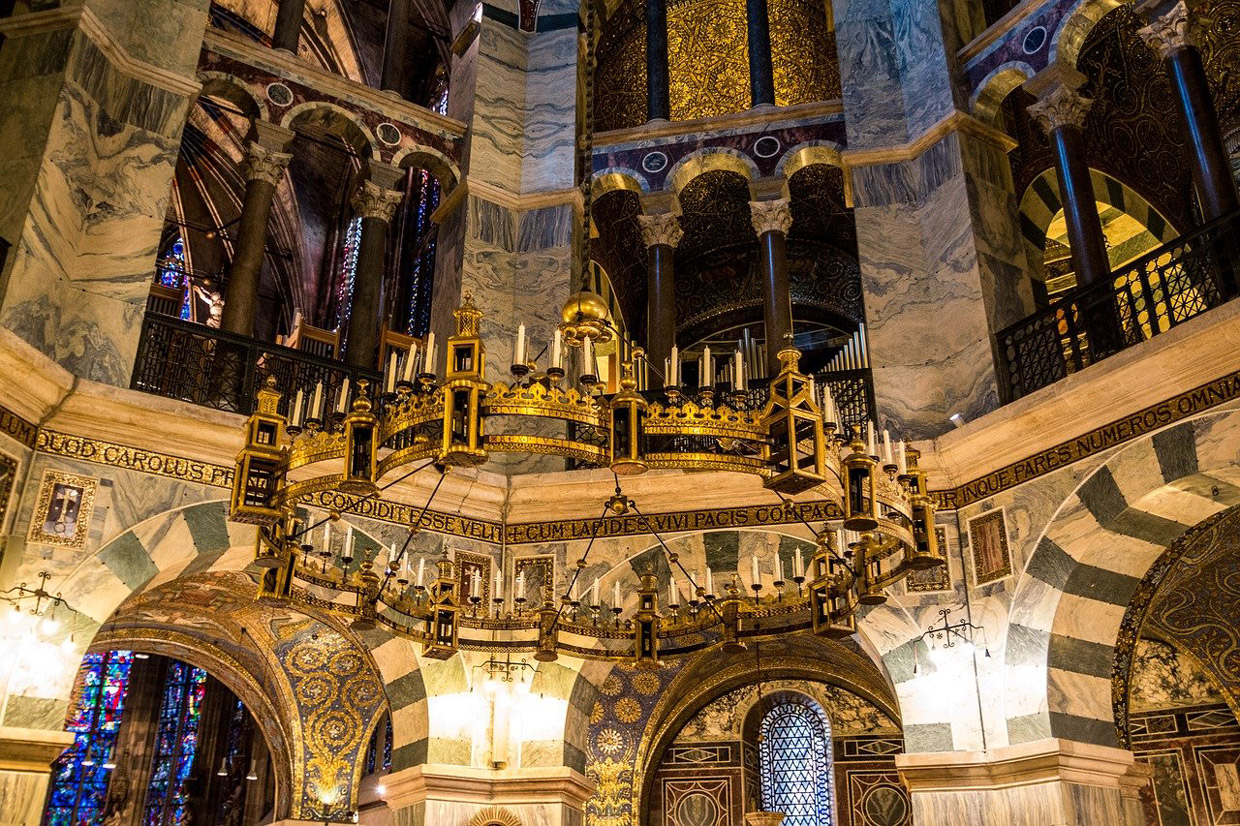 Why is the Cathedral of Aachen so important?

Aside from being the oldest Cathedral in Germany, Aachen Cathedral holds some of the oldest treasures from the early medieval period.

This treasure, which includes the Charlemagne throne, the Golden Pulpit, the Shrine of the Blessed Virgin Mary, the Golden Charlemagne Shrine, and a Golden Altar, is one of the most impressive historical treasures that are of great value and attraction for religious visitors.

Another beauty of the Aachen cathedral is its mosaics. These Byzantine-style mosaics were used in various parts of the church to give it a magical and impressive look. Artistically, the value of these mosaics is very high. However, these mosaics were installed after the death of the cathedral builder. So Charlemagne could not see the new beauty of his Cathedral.

The Cathedral of Aachen was one of the few buildings that did not suffer much damage during World War II. In addition, the few injuries were quickly repaired. Restoration of various parts of the Cathedral continued until 2006.

The Interior of the Cathedral 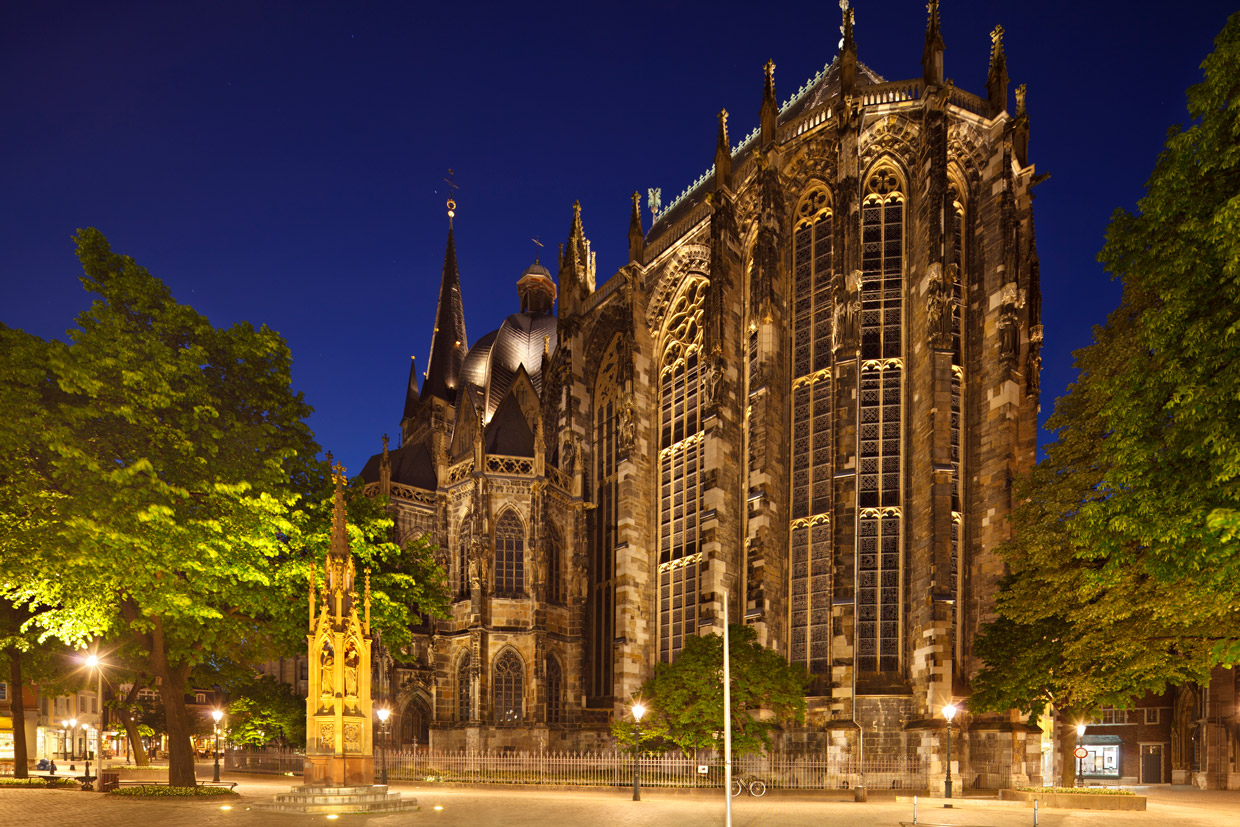 The Exterior of the Cathedral of Aachen

The bronze doors on the west side of the Cathedral are known as the Wolf Doors and were built in the 8th century. The ancient carvings engraved on these doors have made the doors very impressive and eye-catching.

The bronze statues you see at the entrance to the hall are the same statues that Charlemagne brought to the church in the 2nd century. These sculptures are called she-wolves.

Surely you are curious to visit this Cathedral with all the things you have read about it. If you want to visit the Church of Aachen, go to Domhof 1, 52062 Aachen, Germany.

The tour costs 5 euros and lasts 45 minutes. The starting point is a tour of the cathedral treasury. You can buy tickets online or from the Dom Information section near the Cathedral of Aachen. 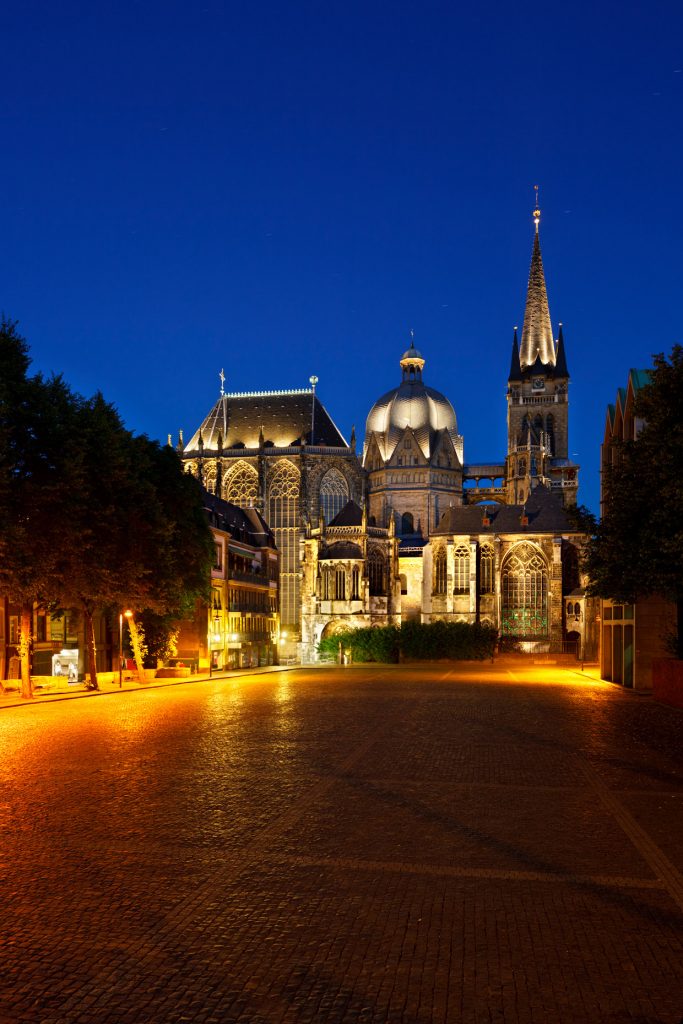 The Best Time to Visit the Cathedral of Aachen

The best time to visit the Cathedral of Aachen is summer. At this time, the city temperature is very pleasant, and the rainfall is not high. The average temperature in this city in summer is 18.2 ° C.

In general, the cities of Germany have a very high level of security, which also applies to the city of Aachen. The crime rate in this city is very low. In the case of medical attention, you should know that the people who plan to travel to Aachen do not need to be vaccinated. So travel safe and have a great time!