Dragons are not a one-dimensional mythological creature in China. They are a cultural phenomenon that affects many aspects of the Chinese people’s lifestyle and beliefs. No matter where you are, you can always see a dragon just by moving your head easily in a temple or party or a stadium. Historically, dragons play an important role in Chinese mythology and are a part of their culture. With better recognition, you can better understand traditional Chinese culture, which can significantly affect your visit to this ancient country.

Have you ever faced Chinese dragon symbols? I believe the answer is yes. It’s not hard to see dragons in Chinese traditional stuff. In fact, in books, clothes, movies, sports, and almost everywhere, you can find them easily. You may face some people with dragon tattoos, which are many, especially in China. Do you know how these ancient creatures are made? If so, how much do you know about the many types of Chinese dragons? This creature is the most famous mythological creature in China. Read on to find out everything about them.

The Origin of Dragon in China

With numerals of epics and fiction about Chinese dragons, no one knows the primary origin of these creatures. Still, something definite about them is that they are ancient and historical as the symbol dates back to at least 3000 BCE. One story is that ancient people made a totem-worship like a dragon, which was a combination of different animals. According to this story, ancient people have created dragons by combining other creatures like tigers, snakes, and craps.

The Yellow Emperor (Huangdi) started a serial war against nine tribes, and after defeating them, he incorporated the other tribes’ totems into his dragon totem. By this story, we can explain why the dragon is a combination of nine different animals. To describe it, we can say that the eyes were close to shrimp, antlers like a deer, a mouth like a bull, a nose which was inspired by dogs, whiskers like a catfish, some dragons have a mane similar to a lion, a tail like a snake, scales like a fish, and claws like a hawk or an eagle.

A different story says that the Yan Emperor was born of an encounter with a powerful creature which was mostly like a dragon, and because of this event, he was a great leader. Although there are many tales about the origin of dragons in China, the most reasonable possibility is that finding the giant fossils of dinosaurs may be a good reason for ancient people to make these fictions. There is no similarity in appearance with the western dragon. However, during Marco polo’s journey to China, he got familiar with this concept, and his description of the Europeans may have affected their imagination of the dragon.

The Importance of Dragons in Chinese Culture

People in China worshipped dragons and were respectful to them. There are many temples and shrines which have been built to honor them. If you go to a holy place in China, you may see them on the walls or at the top of the columns. Sometimes there are statues of dragons in these places due to religious beliefs.

In Chinese opinion, a dragon can be an influential creature on affluence and wealth of commerce. Even during the new year celebrations, there is a dragon dance. It is for asking for a well-earned year and

the prosperity of business.

A Blessing from Heaven

As mentioned, there were dragon gods before, and they were very respected by farmers. Because people thought these gods were involved in the quality and quantities of agricultural products, so they made offers and used to give them many gifts to ask for a good harvest year. They also thought these gods could protect their lands and harvests from heavy floods, which was common in the past.

Some people in China believe dragons can have a vigilant role in their homes and occupations. They’re seen as protective figures, so they may keep a dragon picture in their homes or tattoo a shape of dragons on their body. You may see dragon engraving on wooden stuff or stones. 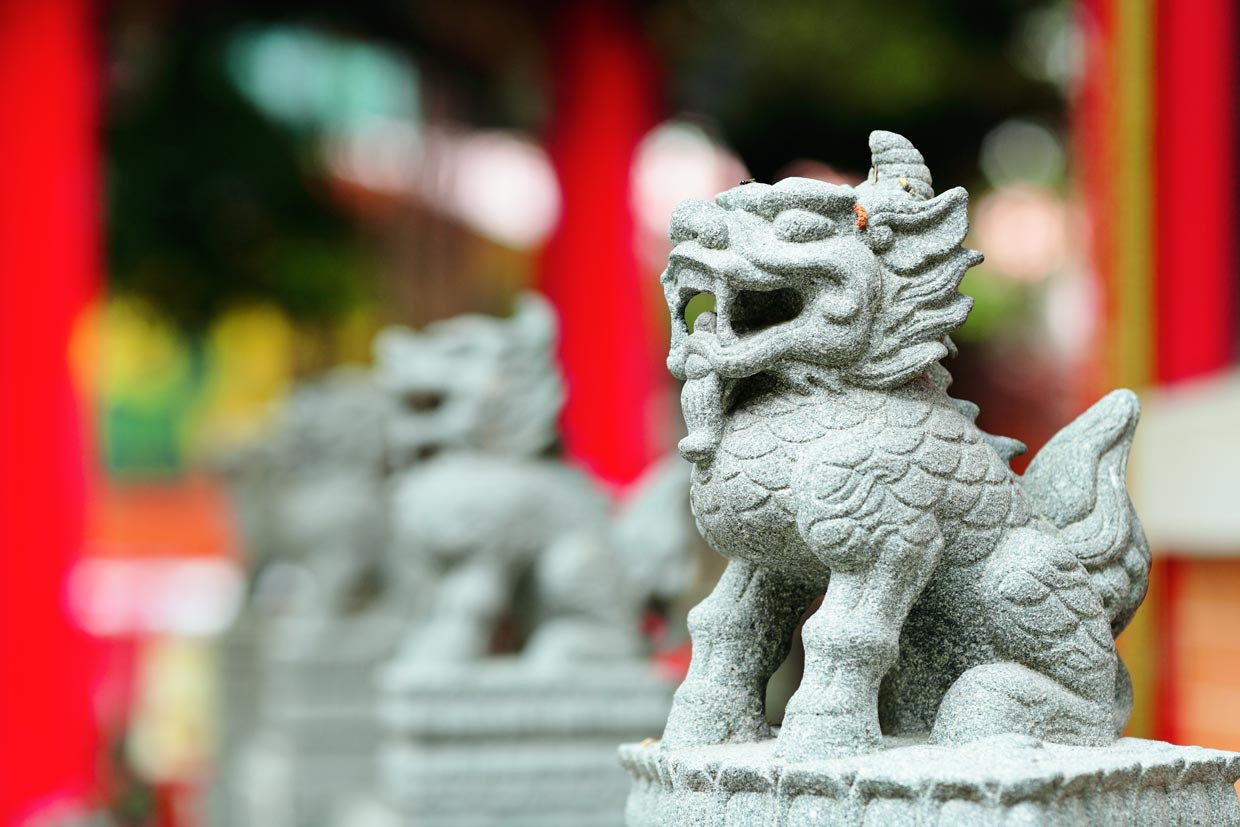 Dragon in Chinese is an important creature in mythology, so Chinese people consider it a symbol of different things. Here are some of them.

There are many tales about dragons that introduce them as kind and warm creatures. In these stories, they help people in trouble and have a supportive role.

Not only Chinese people but also others believe dragons are a great symbol of fortune and luck. This idea may be a reason for seeing a picture of a dragon on the wall of many casinos.

We have already stated about the relation between dragons and agriculture. According to Chinese mythology, dragons are the weather and season controllers. Because of having wings, male dragons can fly and bring rainy clouds with themselves, and female dragons are earthly waters like seas, rivers, and wells controllers.

In Chinese belief, those who were born in the year of the dragon are nobler than others. They believe these are selected humans, and they have good fortune in their life. They are usually more powerful and healthier than others.

Chinese fiction picture dragons are wise and thoughtful creatures. They overcame many difficult situations by using their wisdom. Some academic organizations in China have used dragons in their logo. 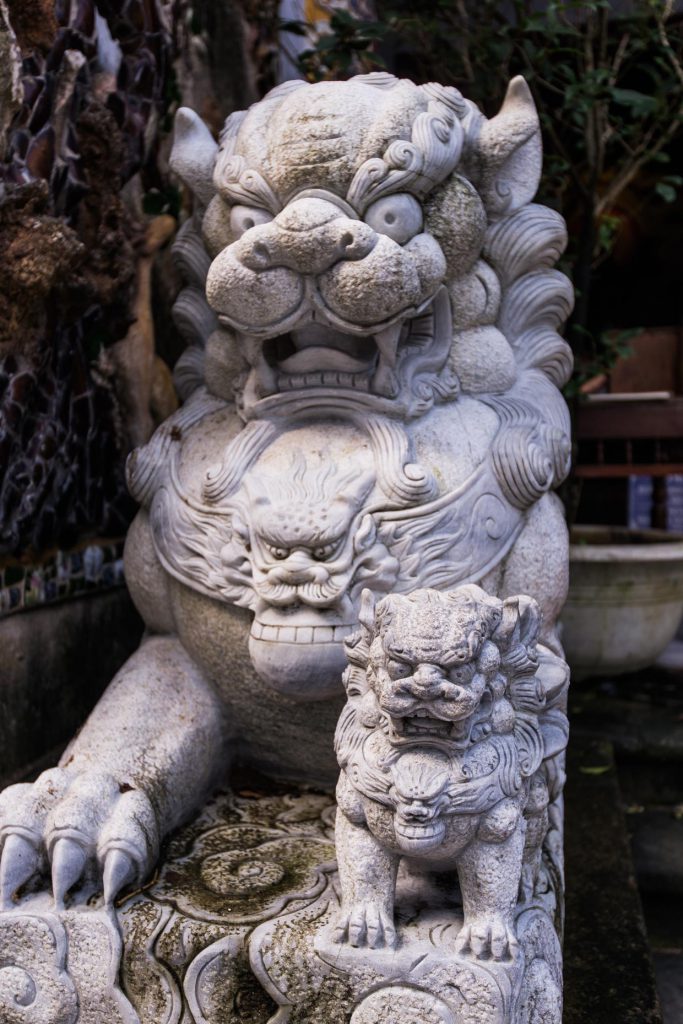 There are different colors for Chinese dragons, and each one contains a unique message and symbolizes differently. Dragons may be in different colors, but there are five primary colors. Red, green, black, blue, and yellow.

People usually put blue and green dragons with each other. Blue dragons symbolize the power of the sky and are related to the rains and water, while green ones symbolize nature and Earth fertility. Most people associate white dragons with purity. In some regions, people may believe they have a relation to death. Red dragons are considered symbols of both good fortune and happiness. You can see red dragons at almost all parties and ceremonies, especially at weddings.

Yellow dragons usually mean power for their carrier. They are the most used dragons for being a symbol of an empire and its emperors. In other words, they are loyal dragons and were emperors’ favorites. In some places, people believe yellow dragons are the symbol of wisdom and wealth (since gold is yellow too). 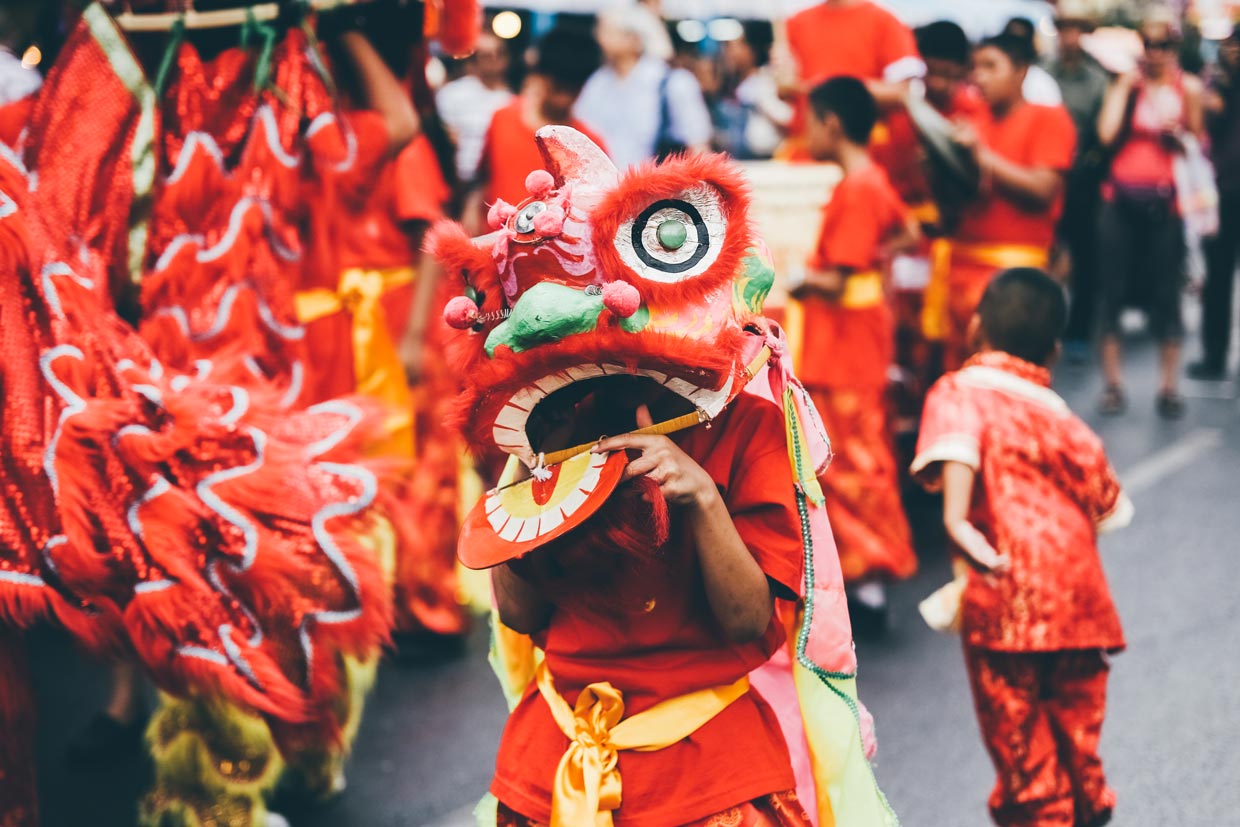 Zodiac and Year of the Dragon

The Chinese calendar has a 12-year cycle of animals. This calendar assigns an animal to each year, and people believe each zodiac animal gives specific properties to its year. The dragon is the fifth animal. There is an old fiction behind this election. An ancient emperor decided to name each year for an animal and throw a big party. He said the order of naming would be in sync with how animals arrived at the party.

He expected the dragon to arrive earlier as it was the most powerful animal, but he came after Rat, Ox, Tiger, and Rabbit. He was surprised and asked about the reason. The dragon said that on the way, he saw a village that was suffering from a prolonged drought, and he had to bring them rainy clouds so once again they could have a good life. The emperor was so happy when he heard of this generosity and noble, so he gave him the fifth position of naming in the zodiac cycle. 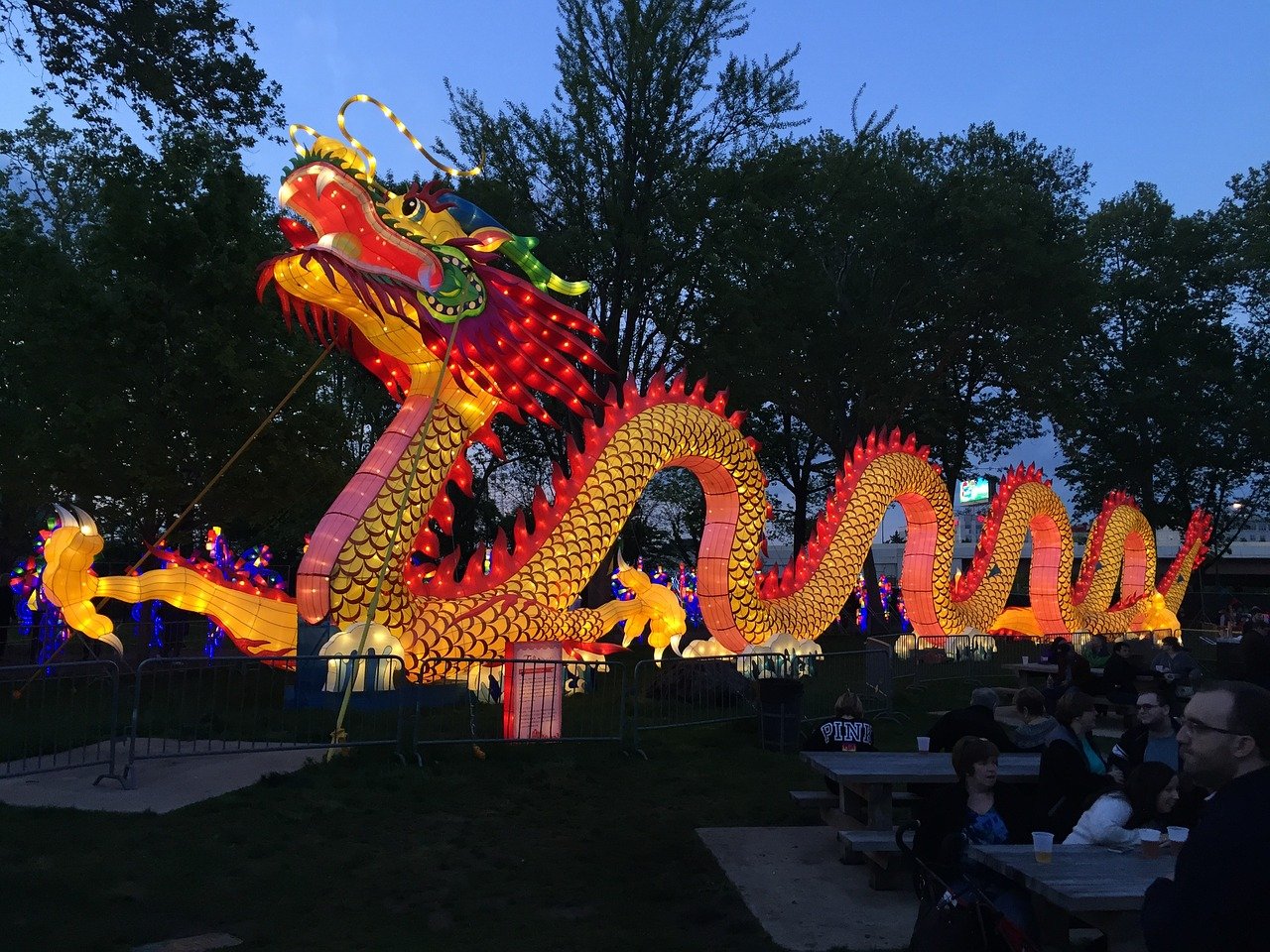 Year of the Dragon

Although they are other types of dragons in Chinese mythology, these are the main types.

They control both the winds and the rains on earth. These two elements are essential for the survival of humans’ life, and they have to make sure that humans benefit from both of them.

They are underworld dragons that protect from hidden or buried treasures, whether these treasures are made by humans or natural ones. According to ancient Chinese fiction, volcanic eruptions are their reports to heaven.

Most Chinese dragons are wingless. However, these special types have a pair of wings, and their duty is related to bringing clouds and rain for humans. People also consider the relationship between them and floods. These are the oldest types of dragons in Chinese mythology.

In Chinese beliefs, they are rare and also powerful. Some people thought they have a connection with the winged dragons and make rain.

As ancient Chinese people cared a lot about time, they set an individual dragon for it. Although this dragon can control time, it is restricted to the water and condemned to live in water.

People believe they are the feminine version of the spiritual dragons and help them control the rivers and seas. They fly as a couple with spiritual dragons. In some regions of China, people think they are in charge of human fertility.

Guardians dragons whose duty is guarding the heavenly dwellings of the gods. They have wings and great flying abilities. They are brave and good warriors.

They are dragon gods, the most powerful ones. They rule seas and lands and manage other dragons by making important decisions about how they must act. They can shape into various forms, even humankind. All four directions (East, West, North, and South) are their territory. 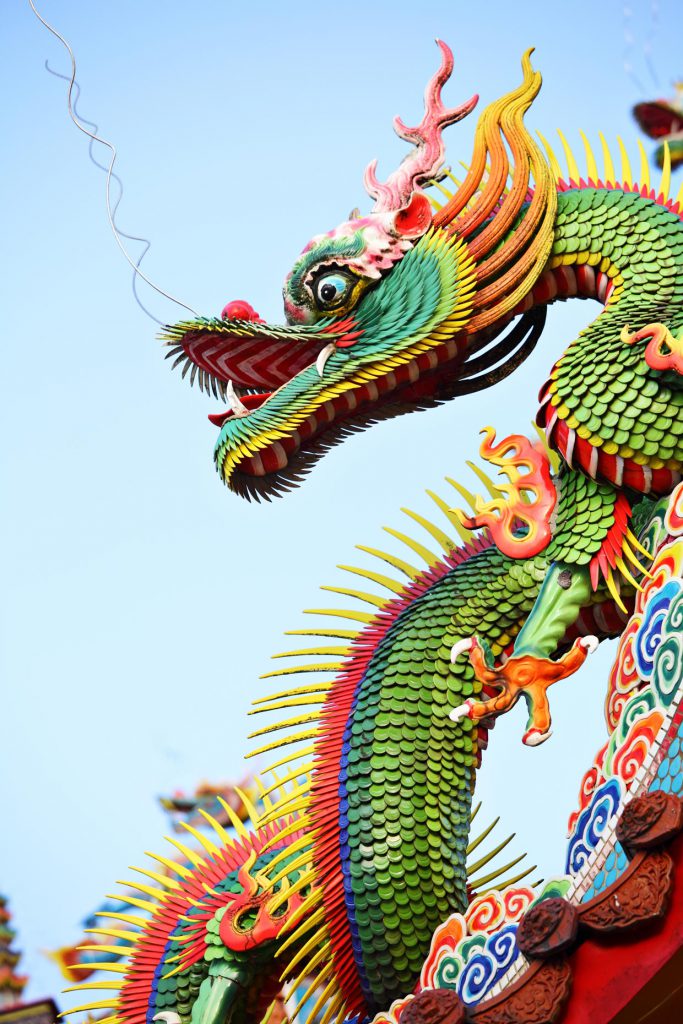 Some Facts about Chinese Dragons 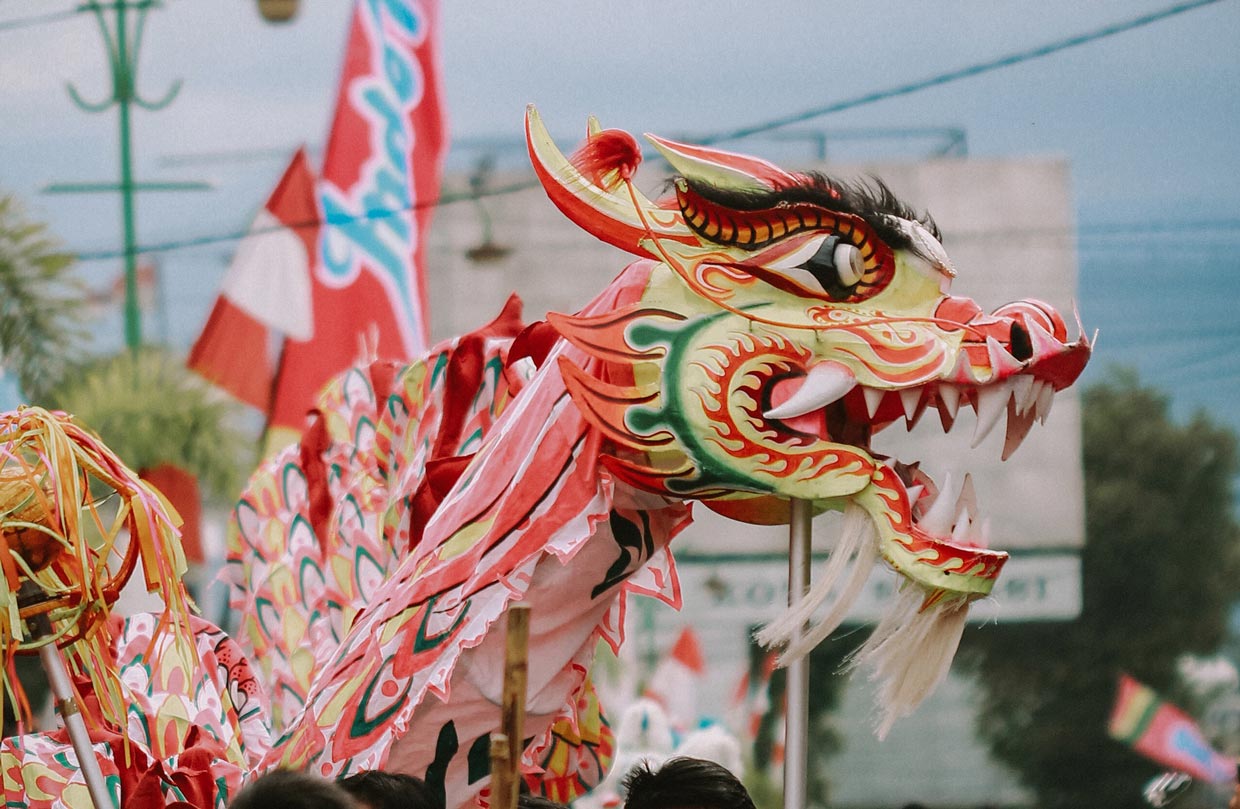 Relax and Enjoy in Montenegro

Sicily Island Tour – The Beautiful Villages in the Northeast