Sultanahmet Square In Istanbul- What to See & Things to Do

Every part of Sultanahmet Square has its own story. If you want to have the best visit, you should dive into Turkish people’s culture and then enjoy the atmosphere. So many places are quite near to this place, and it’s easy to reach there within walking distance. All you need to do is to allocate enough time to visit them properly. We have made a shortlist of them below.

Sultanahmet Square is one of the most beautiful places not only in Istanbul but also in Turkey. History plays a significant role in this attraction as almost every part of it has a history dating back to 2000 years ago. Since the square is very famous in Istanbul, you have to expect to see so many people walking around and visiting this beautiful square. However, it will not reduce the attraction of this place; there is pleasure in the crowds too.

There are so many ways to reach Sultanahmet Square, including walking, taxi, and also metro. You can take the metro to Taksim or Yenikapi and get off at the Vezneciler station from the airport. After that, with a very short walk, you will reach the destination. That is not a long way to go. It’s worth trying to walk. Also, every taxi driver knows their way to this place, and it might be the easiest way to reach. You can easily trust official taxis in the airport.

Sultanahmet Square is the pathway of many historical sites such as the Topkapi Palace Museum. Aside from the stories behind the Egyptian Obelisk, Serpentine Column, Colossus, and German Fountain, this place has its very own rich history. Sultanahmet was previously known as the Hippodrome of Constantinople, the arena of the Byzantine Empire.

Added to wishlistRemoved from wishlist 0
Add to compare
From: $700.00

It was originally used as a chariot racing track in the Byzantine empire and was built in the 3rd century CE. The emperors used it to show their power, wealth, and generosity. They also used this place to gather people and let them watch the strict punishment of rebellions. It was shaped like an oval with a straight end, and the middle had another structure called Spina. Experts estimate the number of spectators to be about 30,000 to 60,000.

It is also known as the Obelisk of Theodosius and can be found next to German Fountain and Serpentine Column. It is interesting to know that it was first erected in Alexandria in Egypt but several years later was transported to the Spina of Hippodrome by order of Theodosius in the 4th century.

In the beginning, it was about 30 meters high, but today it is only 19 meters. On the Obelisk, you can see many shapes carved on the stone on every side of it, which tell many stories from Egypt and the Byzantine empire. Also, the two inscriptions on it are about Theodosius and the erection of the Obelisk. 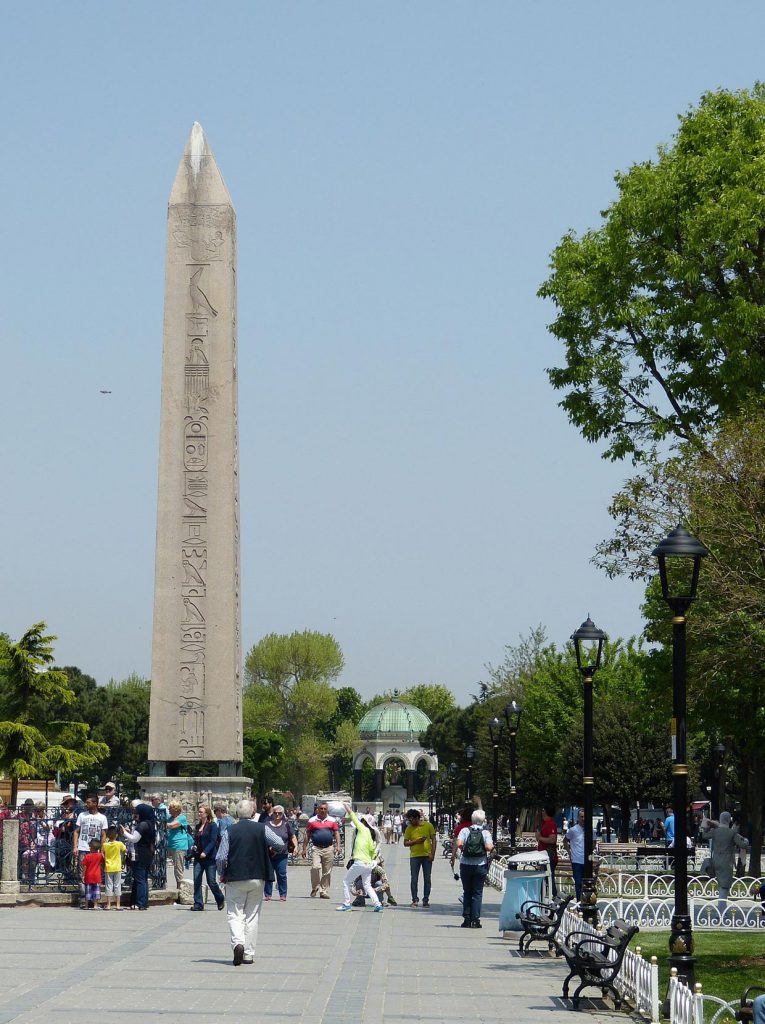 Colossus or Column of Constantine Porphyrogenitus

It is also known as the Walled Obelisk and can be found next to the Serpentine Column. No authentic recourse is available to determine the exact time of building this monument. But it is assumed that it was built to be the pair of the Egyptian Obelisk as in most places, they were built in twins. Also, it has an inscription on it that says the great Constantine emperor restored it. It is 32 meters high and was made with bronze palates at first in the Spina of Hippodrome.

German Fountain was a gift from Germany to Turkey in the 19th century. It was built in Germany and was moved piece by piece to this place. The Sultan of Turkey placed it in line with the remains of the Hippodrome Spina. It was repaired in 2013, and nowadays, you can safely drink water from it. 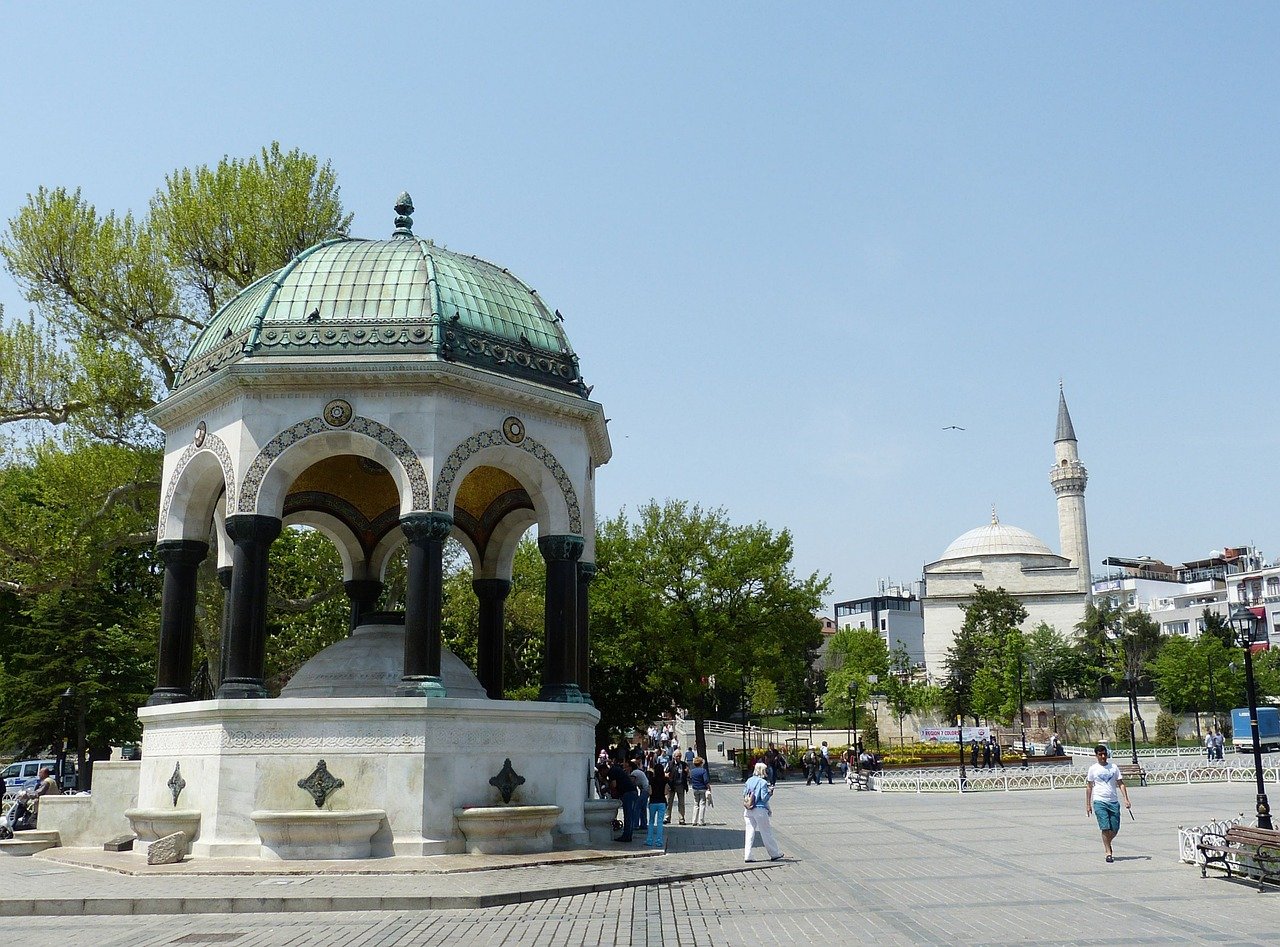 It is a one-minute walk away from Sultanahmet square. This cistern is the biggest cistern among several other cisterns in Turkey. It was built a very long time ago; however, it was then closed and forgotten in the Byzantine era. Basilica Cistern was found in 1545 by a researcher and on accident when local people said that they bring water from a hole under their house and even catch fish from it.

It is capable of holding about 8000 m3 of water. Also,  there are still fish there available to see. It is a popular location in movies and videogames as well. This location has appeared in many movies, including James Bond movies and the Assassin’s Creed games. 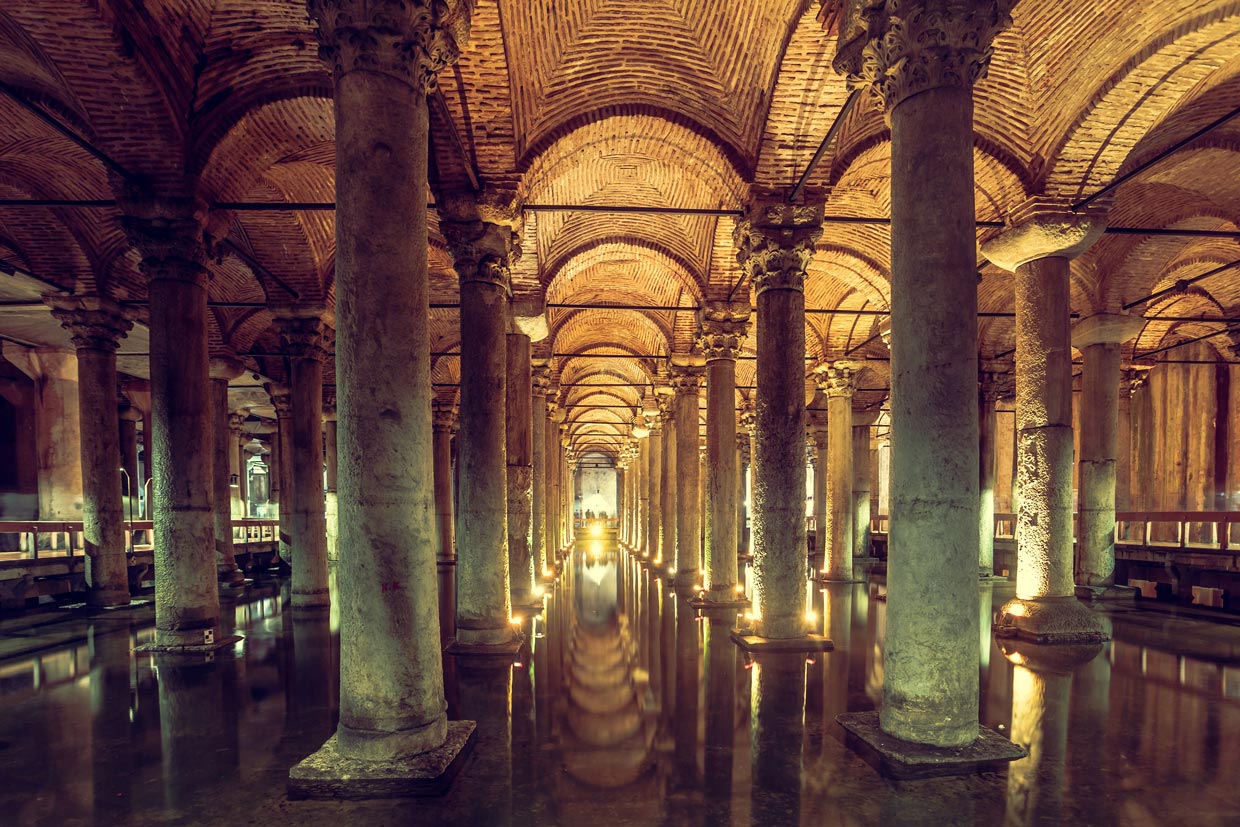 One of the most amazing places in Istanbul is the Sultan Ahmet Mosque or the Blue Mosque. It is one of the places that appear on everyone’s list of places in Istanbul. It was built in the 17th century and took seven years to complete. The name comes from the blue tiles used for the interior decoration of walls. It has six beautiful minarets and many domes. 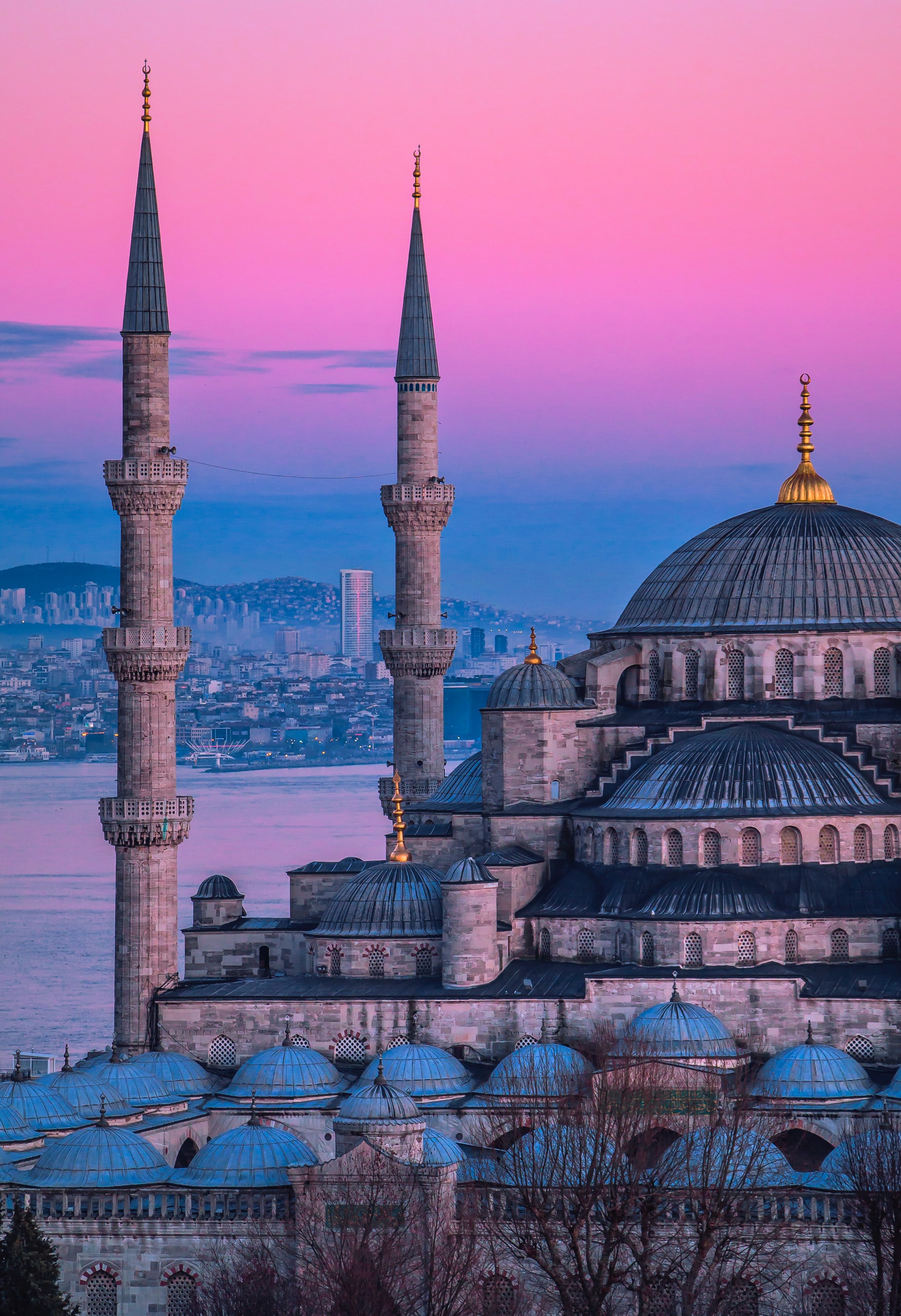 This building is right in front of the Blue mosque and is the place of Sultanahmet cemetery. It has lovely gardens around it and functions as a place for conferences.

Church of Holy Wisdom, the present Hagia Sophia Mosque, was the biggest church of Europe back in the Byzantine era and was turned into a mosque later in 1453 after the fall of Constantinople by the Ottoman army. It was turned into a museum back in the 20th century, but then, in 2020, it was reopened as a mosque. It is located right in front of the Blue Mosque on the other side of Sultanahmet square.

Museum of Turkish and Islamic Arts

The Museum of Turkish and Islamic Arts is one of the largest museums in the former palace of Ibrahim Pasha, who was the Vizier (minister) of the great Suleiman king, back in the 16th century. It is home to many historical Islamic antiques such as rugs, calligraphies, and tiles. If you love history and Islamic objects, this place is going to be fun for you.

Sultan Mehmed built Topkapi Palace Museum, and after him, it was expanded by the next rulers for four centuries. It contains so many sections, Halls, courtyards, and Harems. Also, there was an Imperial court in this place. 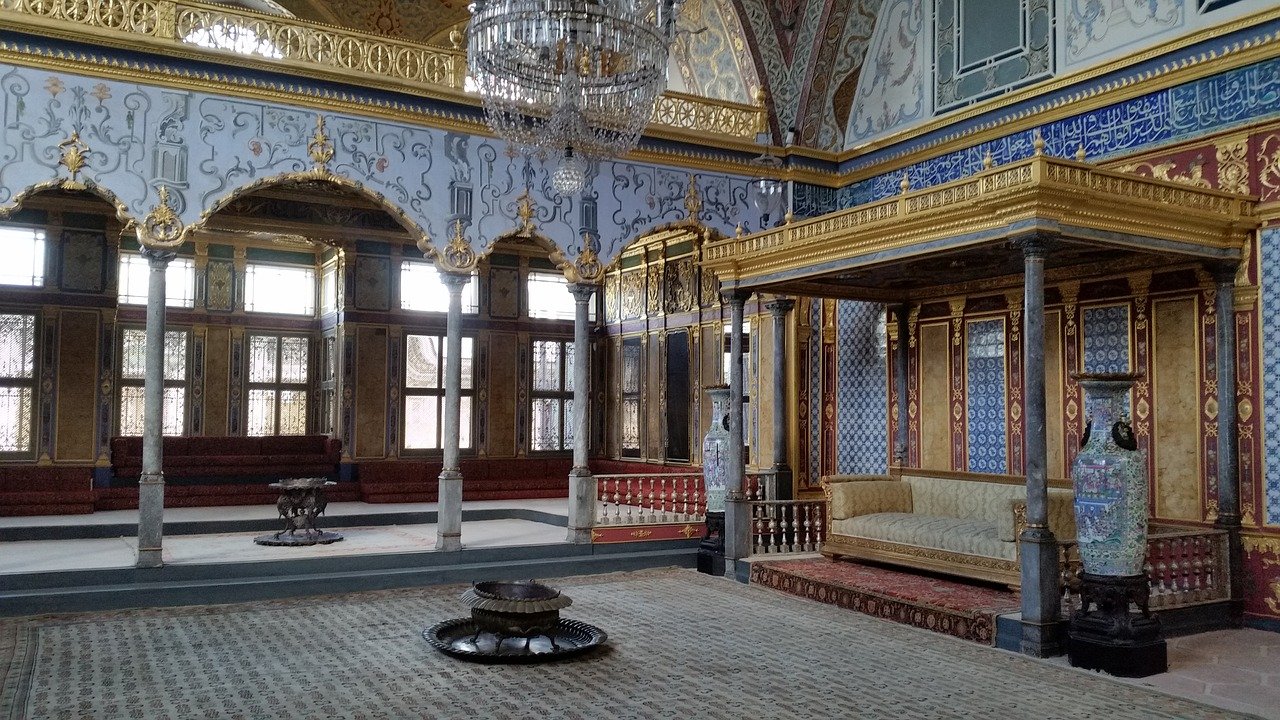 This Turkish bath was built in the 16th century for the Hurrem Sultan, the wife of the great Suleiman. It is located between the Hagia Sophia and the Blue Mosque. They still function as a bath where they give perfect massages and help you rest after a tense day.

Since the center of Sultanahmet square is the Spina of former Hippodrome, you can visit four monuments in a straight line. It might be a good idea to start with the Blue Mosque and afterward pay a visit to the Walled Obelisk in the west. From there, you can see the Serpentine Column, Egyptian Obelisk, and also the German Fountain. In your way, the Museum of Turkish and Islamic Arts is on your left, and the Sultanahmet foundation is on your right.

If you continue this path through the northeast, you will reach the Basilica Cistern. You will probably face the Stone of Million, which was used as a milestone many, many years ago. After visiting the Basilica Cistern, you can see the Hagia Sophia Mosque in the east. Continuing to the northeast will get you to the Topkapi Palace. All of these places are within walking distance, and between them, there are many restaurants, hotels, and gardens where you can rest. Also, after or in the middle of your little journey, you can pay a visit to Hurrem Sultan Hamam and let your body enjoy a great massage. 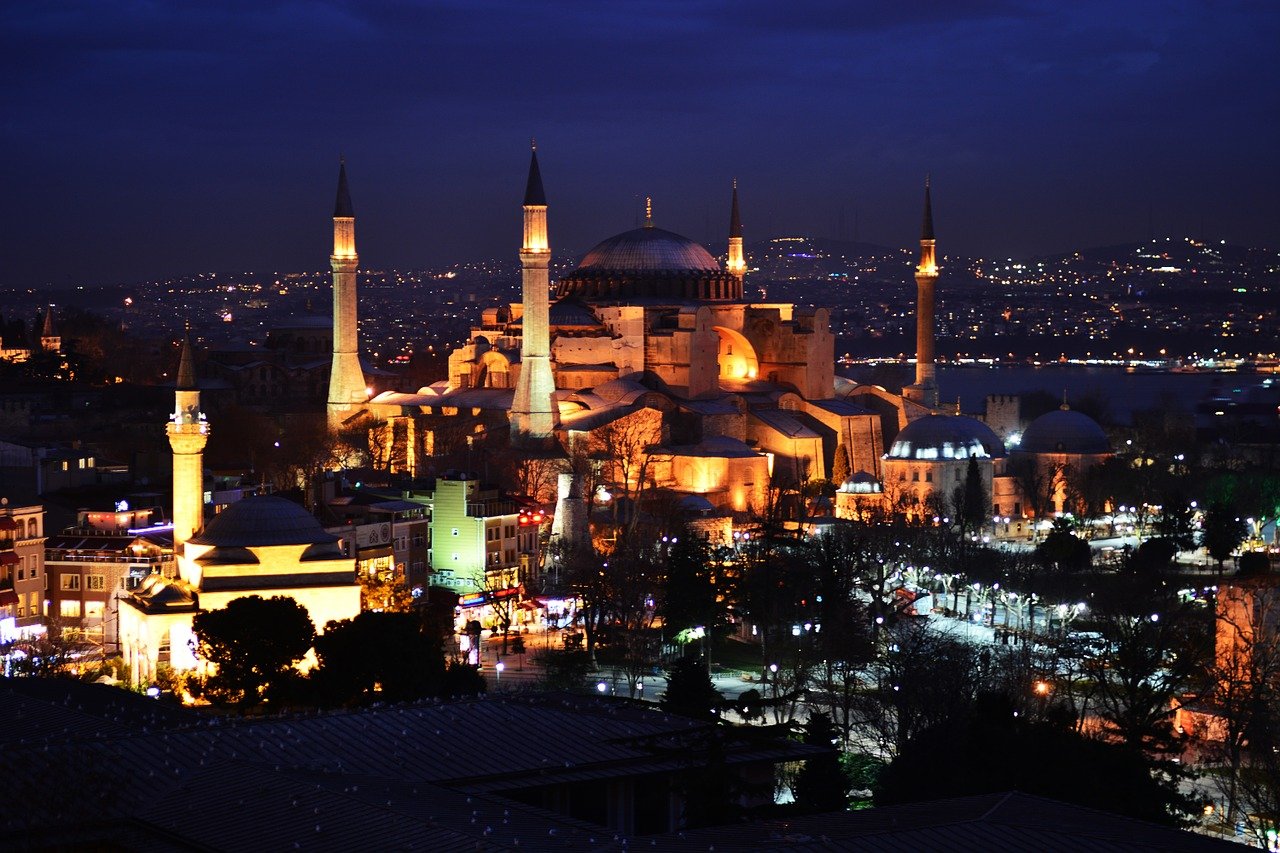 It is highly recommended to visit Sultanahmet Square from March to May and also from September to November. This is because crowds are controllable, and room rents are reasonable. Some seasons are the most popular ones, and the prices vary when it comes to the high demand for accommodation.

Many of these places are for praying to God, and they are so valuable to religious people. Therefore, there are certain rules in some of them that you better follow. For example, in mosques, women should wear a scarf and a long skirt. Also, men have to wear long pants. Following this rule will lead to a friendly visit with no inappropriate behavior. 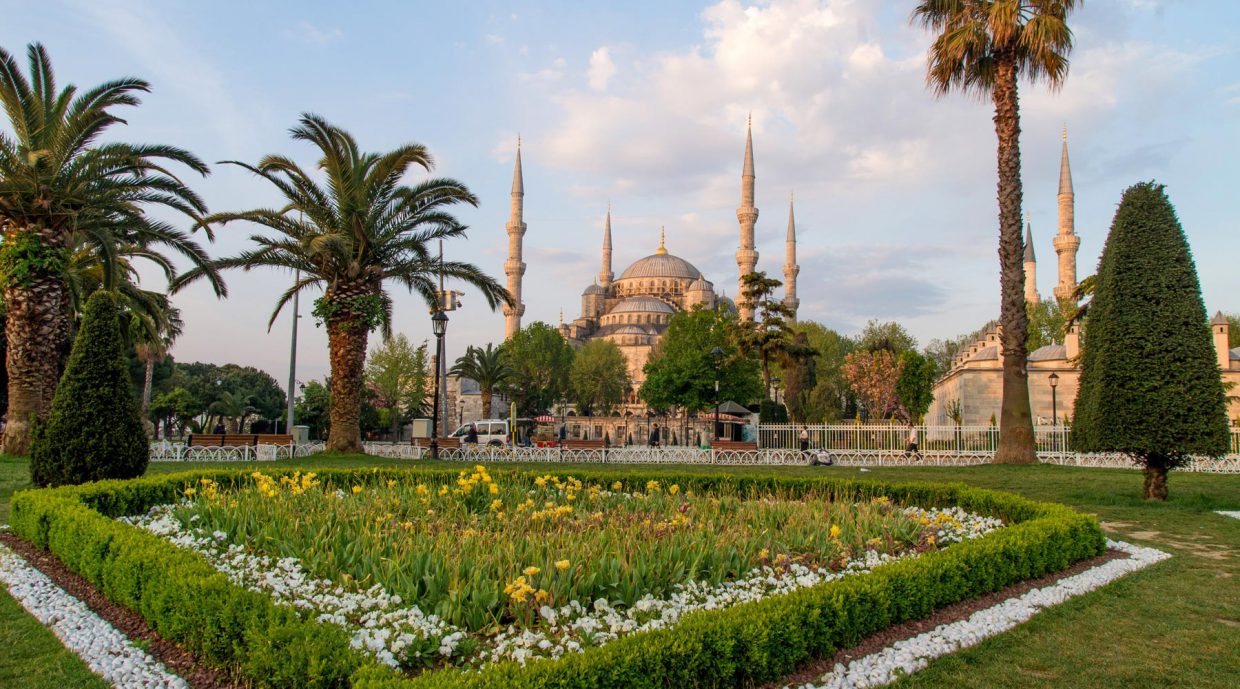 As mentioned above, there are so many places to visit in Sultanahmet square. However, these are only structures. There are so many other areas near this place that you can pay a visit and buy your needs and souvenirs there. So many Bazaars and shops are around this place. You can visit all of these places in one day if you start early. However, it might be a good idea to read about them before going there as history is an undeniable part of this place.