Topkapi Palace Museum contains colorful stories of sultans and the adventures of their kingdom. It is said that its diverse and numerous stories are more than all museums of the world altogether. Historically valuable things are preserved in the museum, and the fantastic structure of the Topkapi has attracted millions of visitors to Istanbul, Turkey.

In 1459, Sultan Mehmet the Conqueror ordered to build the palace, and its building was completed in 1465, and it was the main residence of Ottoman Sultans for many years. Its name was the New Palace for many years up to the 19th century that changed to Topkapi Palace Museum. In about four centuries, about 30 kings lived in Topkapi and ruled from Topkapi. After Sultan Mehmet, every Sultan who came to the palace made changes to and expanded it. Because of this, you can see Islamic, Ottoman, and European architecture in Topkapi.

The Topkapi Palace had a capacity of 1000 to 4000 inhabitants. You can imagine how big this palace is! The last king who ruled from Topkapi was Sultan Abdulmajid. He changed his main residence from Topkapi to Dolmabahçe Palace in 1856. One year after the Ottoman Empire ended in 1923, after the government’s decree, the palace changed into a museum. Topkapi Palace became a UNESCO World Heritage in 1985.

Added to wishlistRemoved from wishlist 0
Add to compare
From: $1,000.00 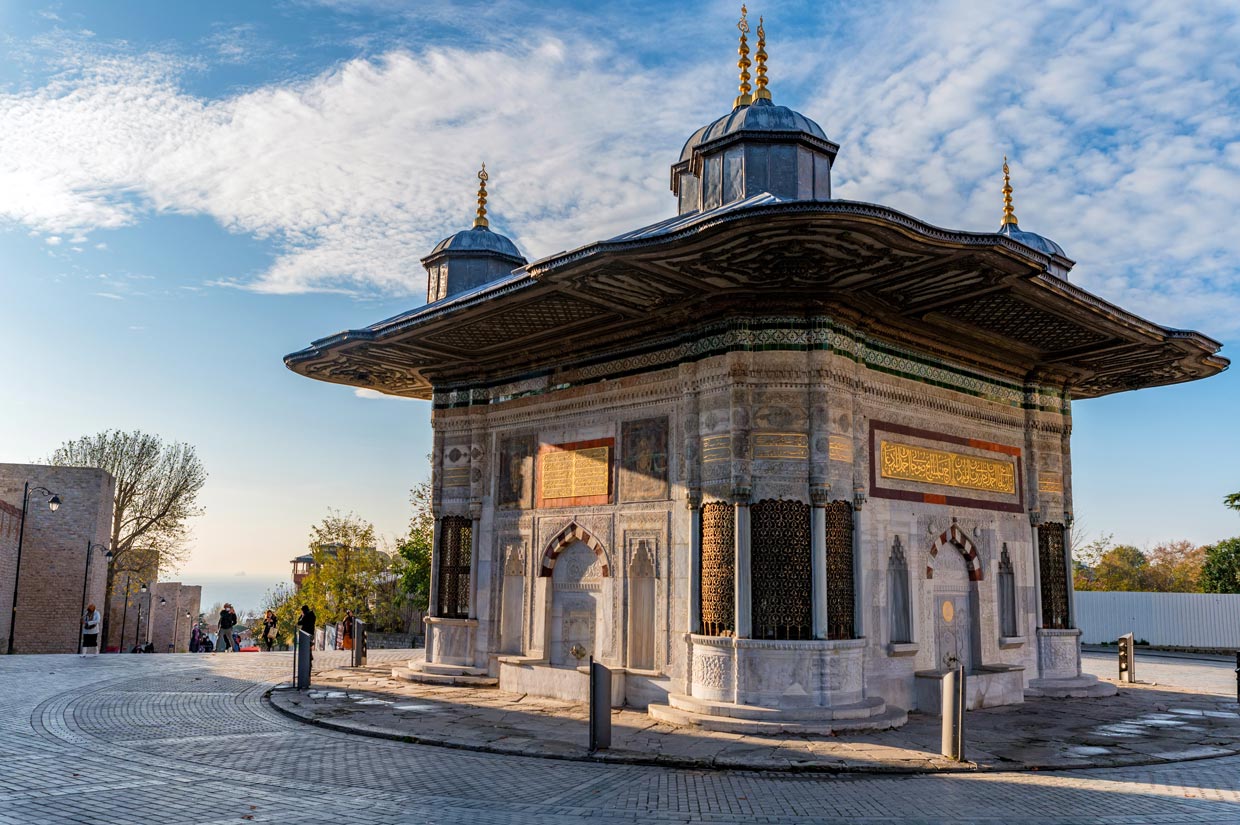 What You See in Topkapi Palace Museum?

The main exterior gate is called Imperial Gate, which was the way that the Sultan used to go through it to the first court. This gate is on Divan street. It is the entrance for the first part of the palace, built by Sultan Mehmet in the 15th century. You can see the Aya Irini Church with its 1500-year history and the historical mosaics inside in the first yard.

Then you pass the Middle Gate (Bab Selam) and reach the second court. At the time of Ottoman Sultans, only the Sultan and his Mother were allowed to pass this gate while riding home; the others should dismount and then enter the court. It is said that Ottoman Sultans were interested in flowers because there are different beautiful flower gardens in their Palaces.

On the right side, the big Palace kitchen is located. A part of the Chinese porcelain set is here, and different kitchen wares from all over the world. On the left, you see the Imperial Council Chamber, and the collection of Imperial clocks are shown there.

From the western side of the second court, you can enter the Harem (the part of the Ottoman Palaces where the king’s wives and children lived). This attractive part of the museum needs a dedicated ticket, but it’s worth visiting this part. There are about 300 rooms in Harem. Harem has six floors, but only one of them is open to the public.

Via Carriage Gate, this floor is reachable. Beside the gate, the dormitory of the Palace Guards is located, and inside the gate, you can see the Haram treasury that financial records were kept. After that, there is a hall with tiles from the 17th century, botanical motifs, and Quran verses. Beside this hall is the Mosque of Black Eunuchs and 17th-century tiles, which display a picture of Holy Mecca inside it.

After this Mosque is the court of Black Eunuchs, with nice Kütahya tiles, and the Black dormitories are on the left. They were the guard of Harem. The courtyard of Sultan’s wives is surrounded by private apartments, laundry, baths, and dormitories. Harem has many other rooms and parts that you may not visit all of them in one visit because sometimes, there are rooms under restoration and reconstruction.

From the Bab Sa’ada, you can enter the Third Court. It was the private domain of the Sultan, and the name is because many ceremonies and celebrations were held in this yard. This domain was guarded by white eunuchs. The nice library of Ahmed III, built-in 1719, is one part of this courtyard. On the eastern side of this court is the Dormitory of Expeditionary Force, which now is the palace for displaying the collection of imperial uniforms, robes, and other clothes with silver and gold swings on them.

There are some relics of Prophet Muhammad and his family in one of the halls of this court. Here is a very attractive palace for those who believe in Islam due to the popularity of the prophet Muhammad among Muslims. It is called the exhibition of Sacred Relics. Sultan Selim has brought these valuable things from Cairo, Mecca, Medina, and Baghdad to Istanbul.

Some relics which are displayed there are: prophet Muhammad’s mantle, the keys to the Kaaba, the gutters of the Kaaba, the casing of the Black Stone, the swords of Muhammad’s companions, the Door of Repentance and also Abraham’s Pot, Joseph’s Turban, Moses’s Staff, David’s Sword, scrolls belonging to John the Baptist, and Muhammad’s footprint. Some parts of these courts are the Emperor’s Treasury, Army Dormitory, Topkapi Palace Library, Agas Mosque, and Private pavilion.

The fourth court consists of the private Garden of Sultan. There are tulips, roses, and a few pavilions with a beautiful view of the city in this garden, where you can drink coffee or tea. However, the price of the tea and coffee is so high.

Medgidia Kiosk is a small palace in the Topkapi Palace Museum built after the order of Sultan Abdulmedgid. This Kiosk shows the history of Roman, Byzantine, and Islamic architecture and every year attracts more than 5 million visitors from all over the world. 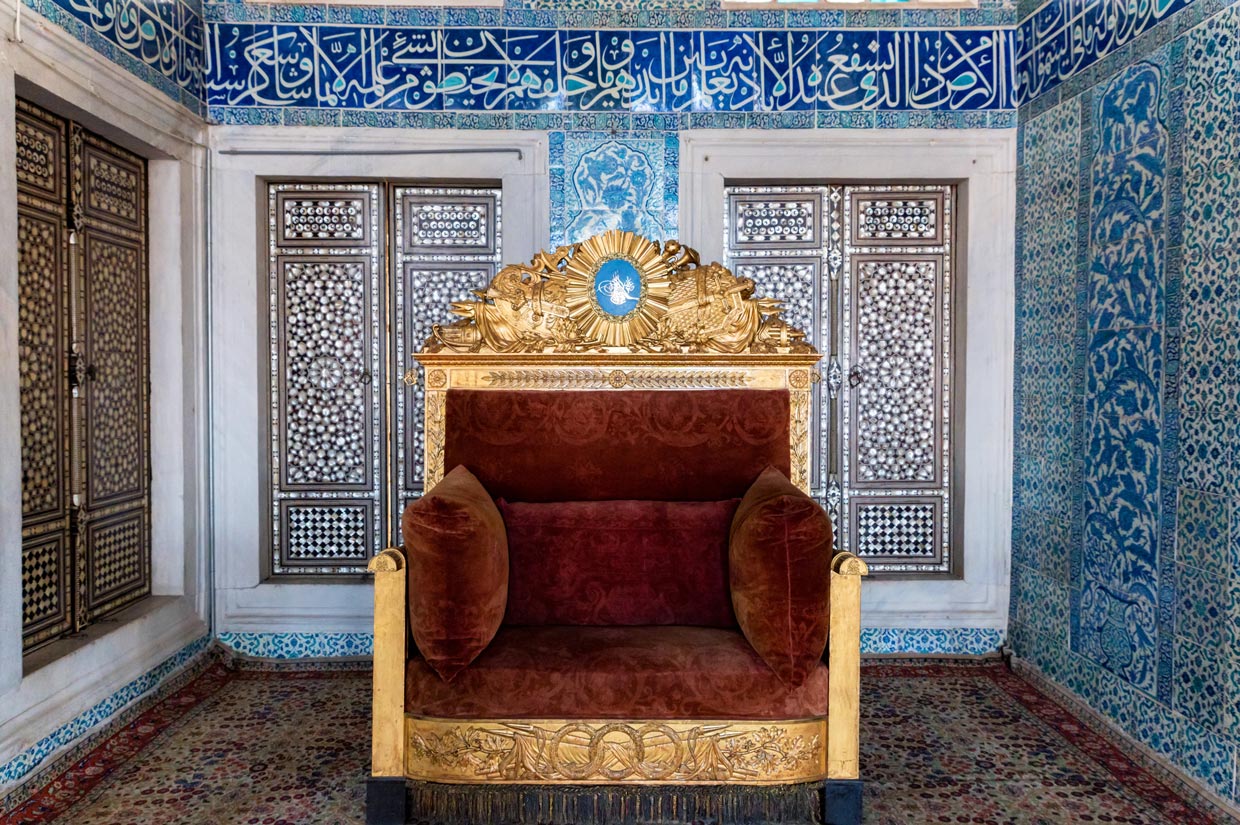 Getting to Topkapi Palace Museum

The museum is in the Sultan Ahmed region that is famous and attractive in Istanbul. So you can easily find the direction to the museum. By tramway, by bus or taxis. The prices are varied, but hopefully, it’s not very expensive to get around.

The Fees and Times to Visit

The museum is open to the public all week except Thursdays. In the summer and the spring from 9 to 18:45, and the fall and winter from 9 to 4:45. The ticket is sold up to 45 minutes before the museum’s closure time.

The ticket is 100 TL for the museum except for Harem and Aya Irene Church. The Harem ticket is 70 TL, and the Church’s ticket is 60 TL. The children under 8 years old don’t need to buy the ticket. 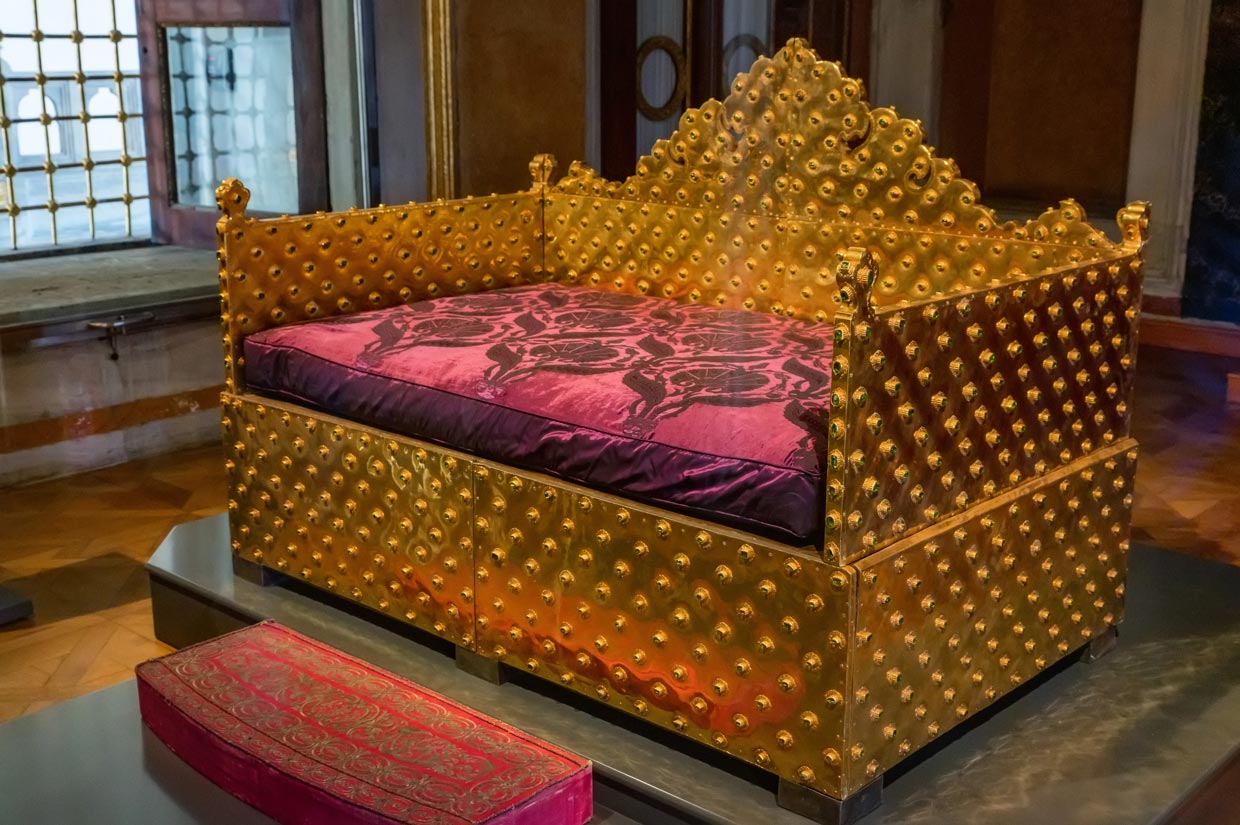