Blue Mosque, aka the Sultan Ahmed Mosque, is a magnificent example of Islamic architecture in Istanbul with a breathtaking architecture dating back to the Ottoman empire.

Have you ever heard of the Blue mosque? We are talking about Sultan Ahmet I mosque, one of the six minarets mosques in Sultanahmet square, Istanbul, Turkey. If you are a history and architecture enthusiast, this place will be a paradise for you. The blue mosque was built in the 17th century, as a gift from Sultan Ahmet I to his capital.

The blue mosque was designed to reflect the imperial strength of the king. In case you wonder why we call it the “blue mosque,” the answer will be because of the interior decoration, which holds priceless treasures, including tens of thousands of blue Iznik tiles. This place got its light through hundreds of stained-glass windows. Moreover, the curvaceous building’s exterior view features a central dome, surrounded by a cluster of smaller semi-domes. Besides, Blue mosque has the greatest courtyard of Ottoman mosques. When you enter the Blue Mosque, You will be amazed by history wrapped in artistic architectural visions.

History (origins of the Blue Mosque)

Many historic resources have stated that sultan Ahmet I was a religious person. He had an extreme desire to build an inimitable beauty as a symbol of gratefulness to god and name a mosque after his own name, like many other sultans. Among all places he had in mind as suitable places for the construction, he chose the Ayse sultan palace lying on the hippodrome side facing the qiblah (the direction of praying for Muslims). The area was extensive and near the sea. Also, it was close to the Topkapi Palace. This monument is spotted on the top of a hill, which used to be home to the Grand Palace of Constantinople of the Byzantine Empire. On the other hand, the blue mosque’s location is strategically situated across from Haghia Sophia, a former Orthodox church converted into the main imperial mosque of the ottoman.

After the peace of Zsitvatorok (which ended fifteen years of war between the Ottoman Empire and the Habsburg monarchy) and the first sultan Ahmet’s, loss in the war with Persia, he needed to reassert the ottoman power and also enhance people’s reliance and morale, so he asked the royal architect to build a construction which could compete with great monuments like Hagia Sophia. After a while, Mehmet Aga drew up the mosque’s plan and presented it to the Sultan. In 1609, sultan Ahmet broke the ground with a pickax, which is now on display in the Topkapi Palace.  Since the empire lack of victory in wars, they didn’t have any plunder; therefore, they had to use the treasury as funds for construction expenses like paying Ayse Hanim 30 loads of pure gold dinars in exchange for her palace.

Building the whole construction took almost 7 years (1609-1616). On June 2, 1616, they held a magnificent ceremony as an opening of the mosque. Sultan and high-ranked state officials opened the mosque by saying their prayers. Back then, people knew the mosque as the “New mosque.” At the time, another mosque was built in Eminönü; they started to call Sultan Ahmet I mosque the “blue mosque.” Mehmet Aga, the royal architect in sultan Ahmet I time, was commissioned to work exclusively on the blue mosque project. 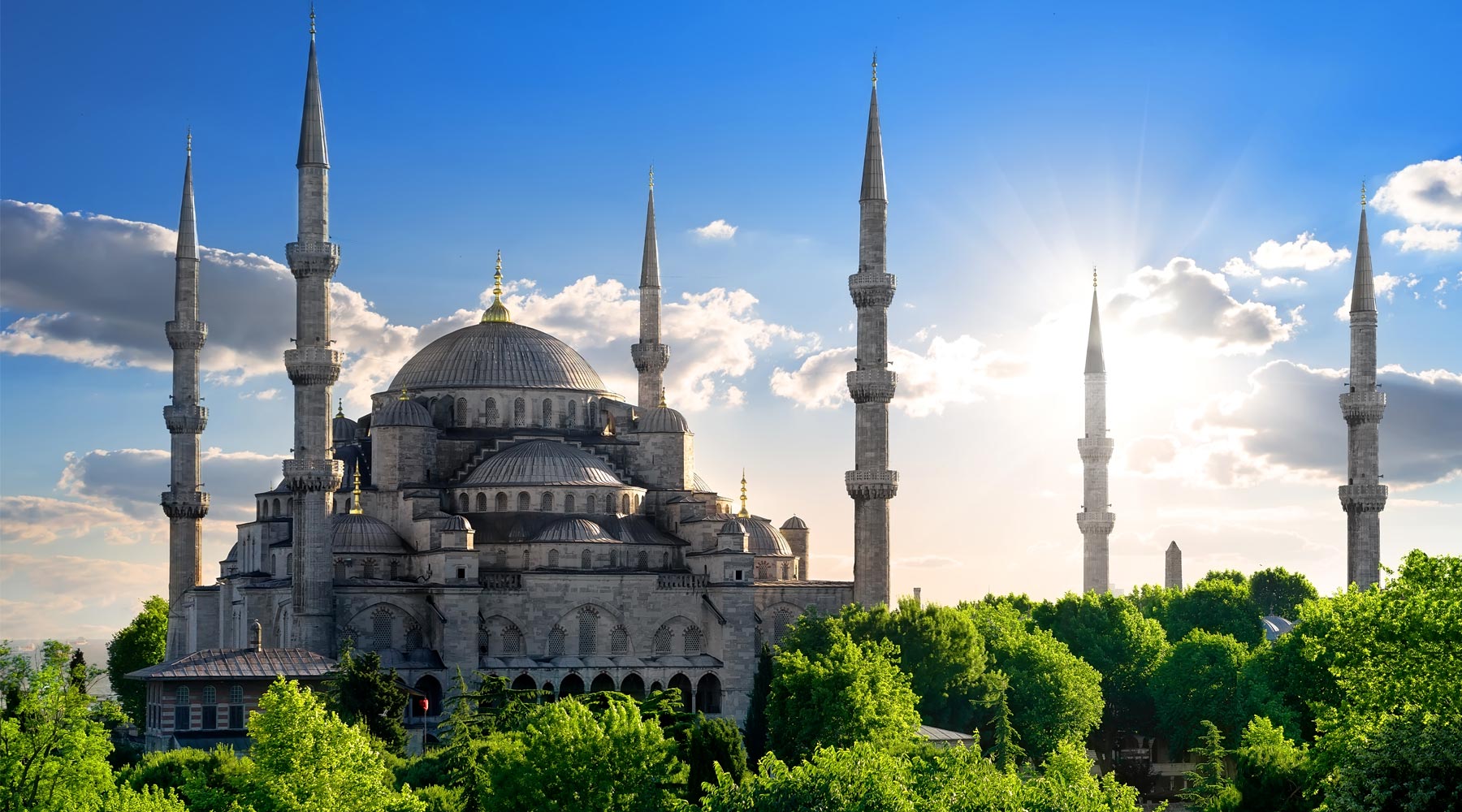 The brightness of colors, fancy walls decorated with Iznik tiles, the doorways embellished with mother of pearl, and its six minarets of the blue mosque, made the Istanbul silhouette even more breathtaking. Talking about a building is mostly about its architecture, and in the case of Blue Mosque, there are many untold stories behind the tiles and design.

One of the most prominent features of the mosque is six tall narrow minarets around the mosque. Back then, the maximum number of minarets was five, but the sultan insisted on having these six minarets. Four of the minarets are standing on each corner of the mosque, and two others are in front of the courtyard. Muezzins, the people who sing Azan (An invitation to pray in Islam) and call Muslims to say their daily prayers, used the minarets to call Istanbul people to come to pray.

Further to minarets, the exterior part of the construction features five main domes and eight smaller domes. A square and a gate sit between Hagia Sophia and the Blue Mosque; a square is a residential place for the mausoleum, elementary school, and an Islamic school. The court is almost as large as the mosque itself, and the central hexagonal fountain is small relative to the courtyard. As you know, the monument’s name is inspired by the interior design concluding over 20,000 Iznik tiles in every shade of blue representing images of trees, flowers, and other plants. 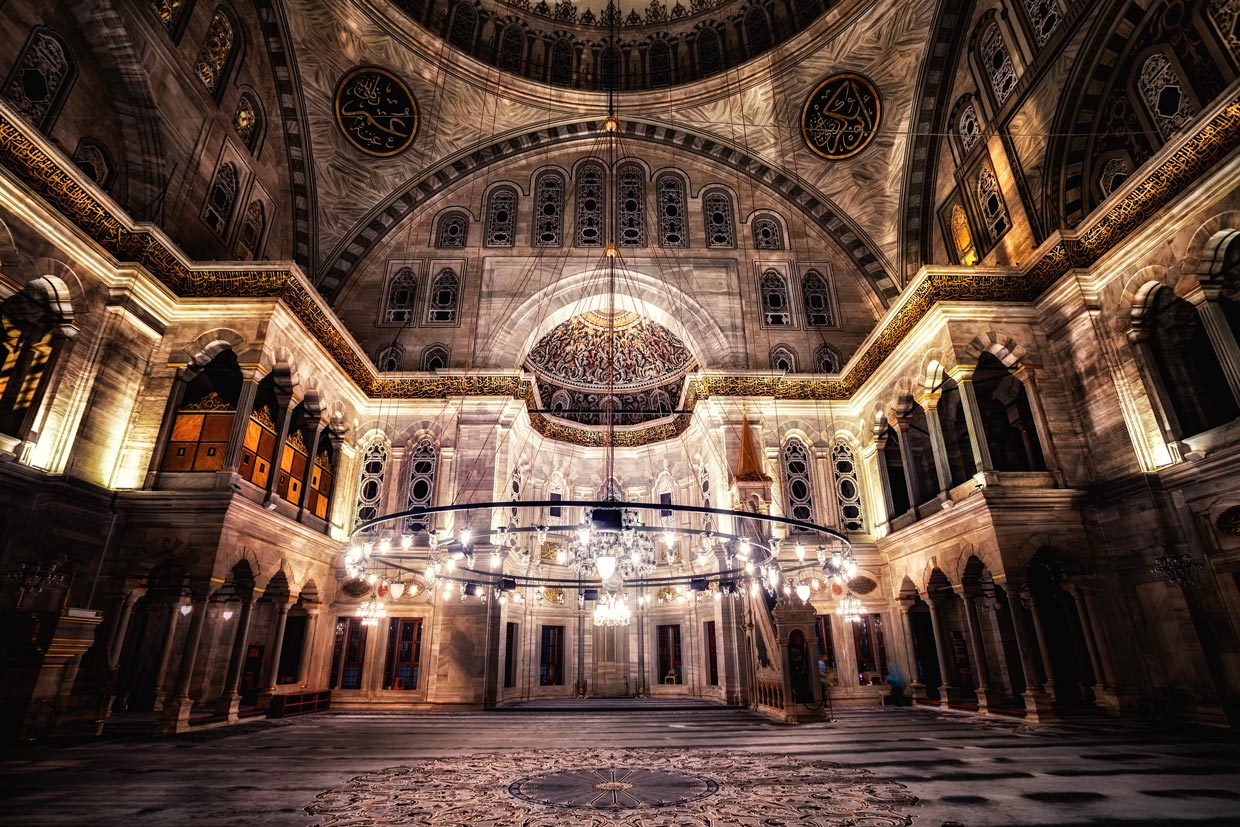 Since the mosque is active, it will be closed for 90 minutes for each period of worship. As a tourist, keep in mind that Friday prayers happening around noon are an important time of worship, so it won’t be appropriate to visit the blue mosque. The best time to visit the mosque will be mid-morning, but if you want to be there at a less crowded time, you should consider that the morning lines are long. 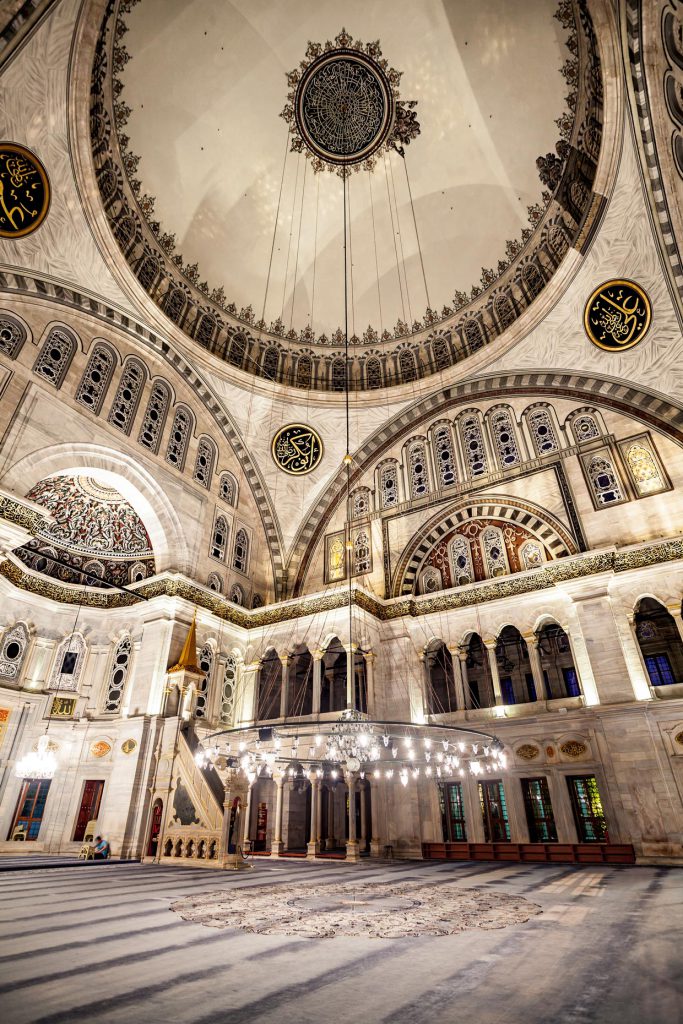 What to do and what to avoid

You don’t need to buy a ticket to enter the mosque. In other words, it’s free, but you can make a donation, which will be used to gain funds for the beauty maintenance of the mosque. When you enter the mosque, try to remain quiet. Since camera flash radiates intense light, which intends to hurt paintings and tile-works, don’t use flash photography. There isn’t any vital action to take while visiting there, but the appropriate and expected behavior is to be normal. Easy as a piece of cake! 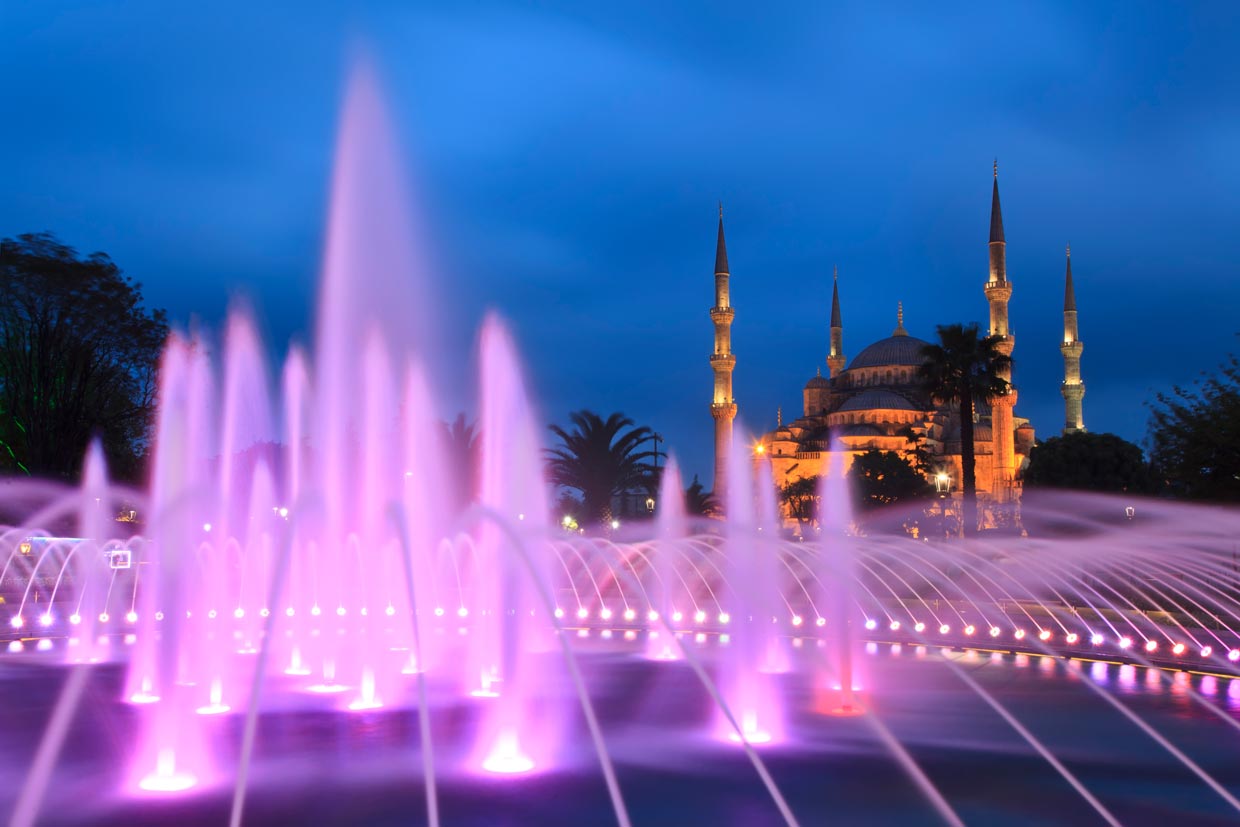 Women have to cover their hair, so it’s necessary to have a scarf, shawl, or pashmina to cover their hair and shoulders.  Women also have to cover their legs, so wearing a long dress or pants will be considered. Also, it’s mandatory to remove your shoes when you enter the mosque. These roles are about women, but men are also supposed to appear normal, not to be offensive in this worship place. A mosque is a place of worship so avoid taking photos of the praying people. Don’t make it a big deal; just be respectful, and that’s all. 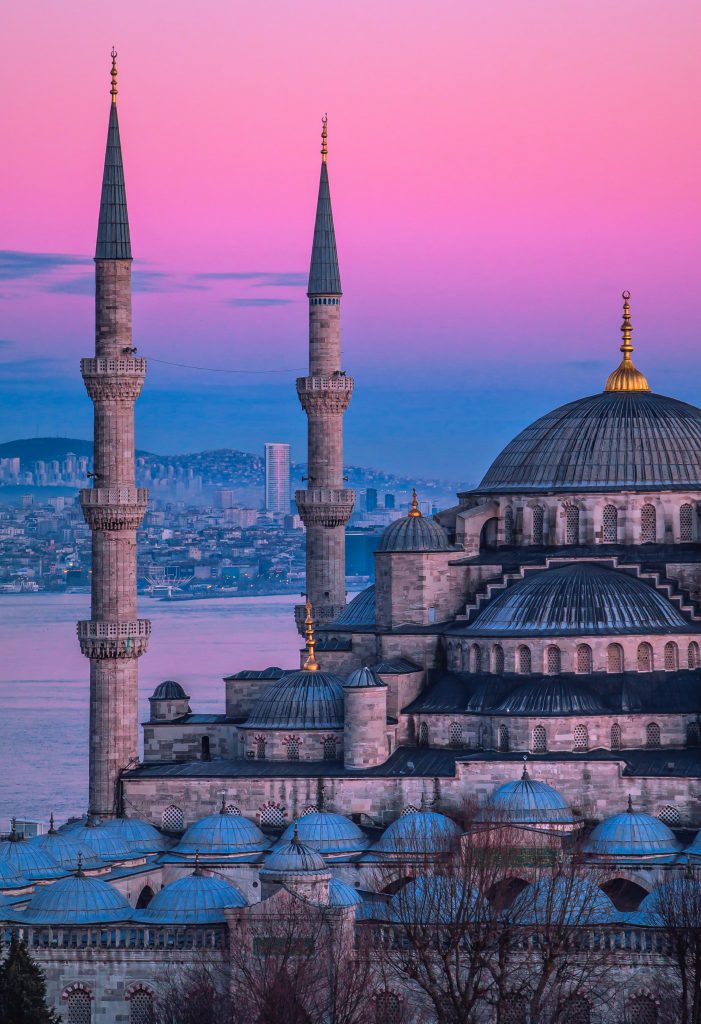 How to get to the Blue Mosque?

If you want to visit the blue mosque as soon as you land, you may need to know that there is no direct way to “The Sultan Ahmet district,” but you have some options. The metro runs to “Aksaray,” and then there will be trams that take you directly to “Sultanahmet.” Public transit for each person costs ₺5 (0.65 $), but taxis will cost about ₺60-70 (7.8-9.1 $), which is considered a quite expensive transportation method while it takes almost 35-75 minutes. So the metro is a more efficient way since it’s faster and a lot cheaper. 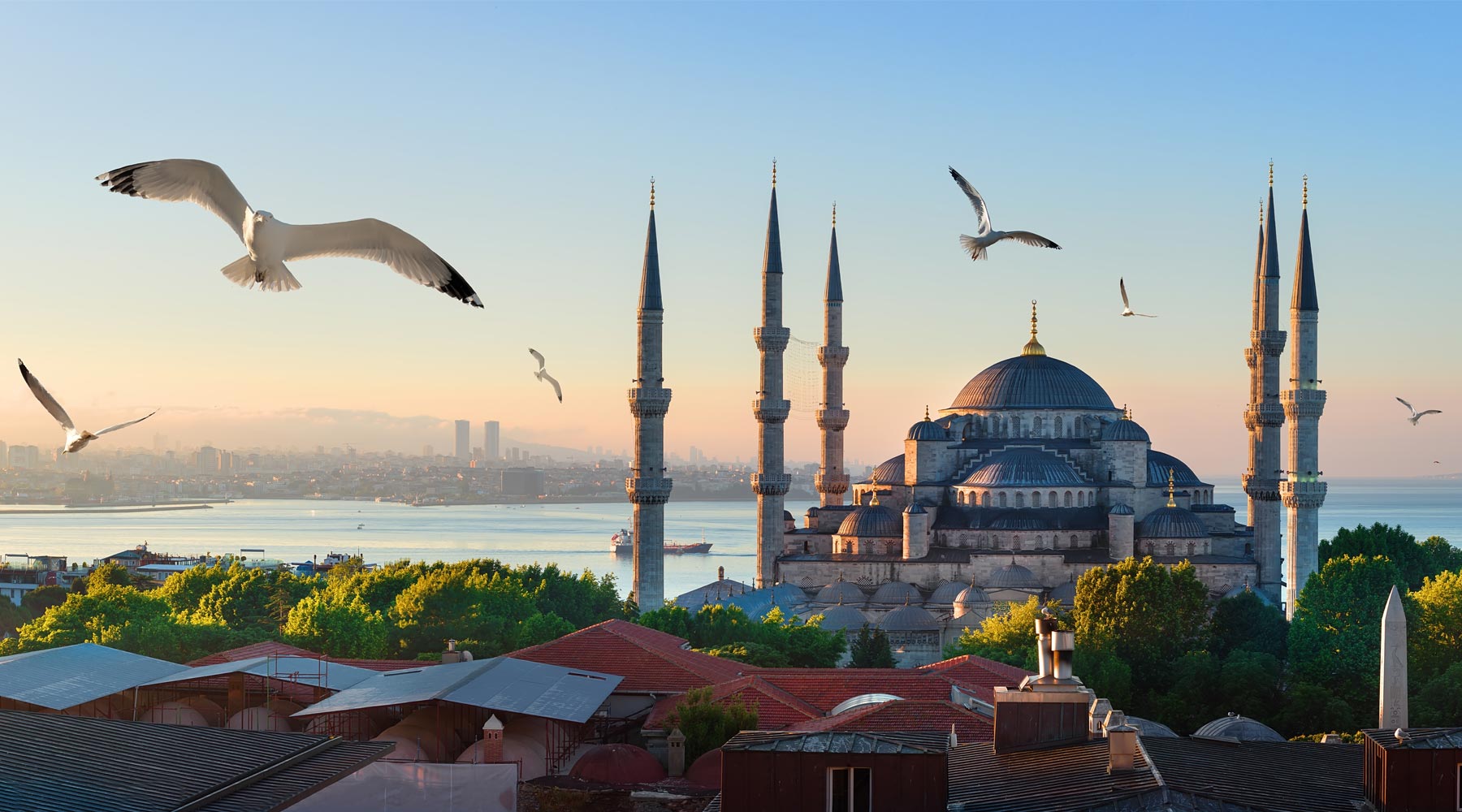 The beauty of this mosque and the feeling you get when you are there cannot be explained by words. As everyone has a special experience with this excellent example of Islamic architecture, we would love to hear about your time there. Let us know how you found the Blue Mosque, in Istanbul.

Into The Amazon Rainforest Tour 5Days/4Nigths

The Best of Morocco