The city of Troy, lying on the commerce route between Europe and Anatolia, has resisted many natural and man-made disasters throughout history. The city, which was destroyed to ashes and rebuilt nine times on the remains, holds the traces of the various structures. If you visit the priceless remains of this city, we recommend you not to miss other precious attractions around. We will discuss them later in this text.
In This Article
Where is Troy?
Visiting the Archeological Site
Cimenlik Castle
Kilitbahir Fortress
Gallipoli Battlefield
Canakkale Dardanelles
When to Visit
Did you know?

Troy may not be Turkey’s most picturesque archeological site. But by virtue of Homer, a famous Greek poet, is among the most admired, as Homer wrote an epic tragedy which has happened here.  If you are interested in visiting this well-known site, you should look for a place called Truva or Troia by locals. The relics of this bygone city are to be found 30 km south of Çanakkale, continuing to a 5 km side road to the west.

If you turn up without assumptions and use your inspiration, you may well be astonished. If you cannot speak Turkish, you can get help from an English-speaking guide to bring the ruins back to life. However, the modern unearthing has greatly illuminated the site, facilitating non-experts to comprehend the basic layout and various settlement periods.

The city of Troy (Troia), with thousands of years of history, is the location where it is said that the legend of the Trojan Horse took place. Many literary works and cinema films adapted this legend. The most important literary artwork about this happening is the famous tragedy of Homer named Iliad. 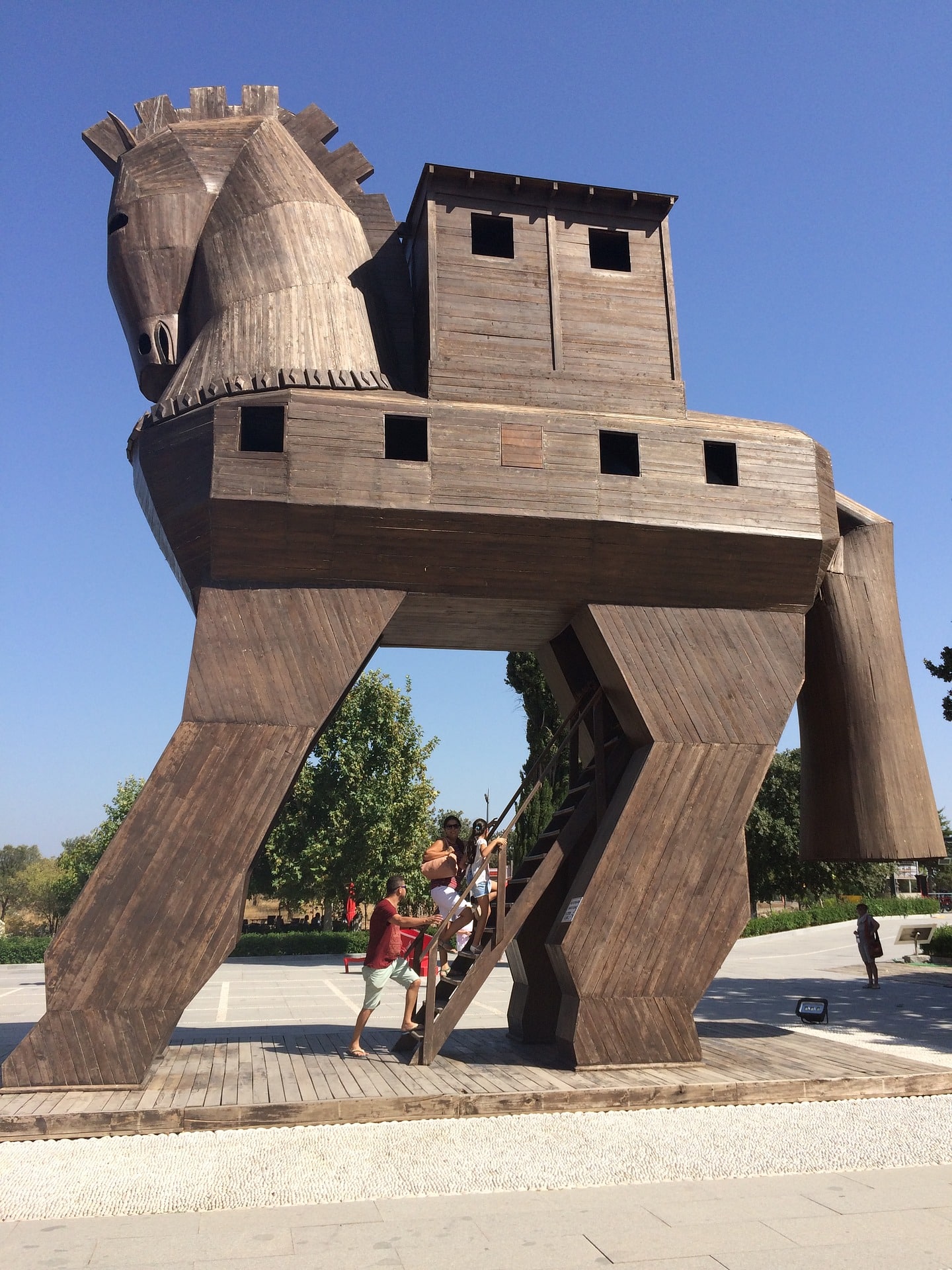 The Origin of the City and the Legends

The site of Hisarlik is the place known to be Troy since prehistoric times. Archaeological groundworks show that it was first settled back then for almost 4,000 years, starting around 3000 B.C. Like a phoenix rising from its ashes, every time that city got destroyed, survivors built a new city on top of it and continued living there.

This ancient city holds an old soul with mysteries and tragedies. In legends, it is told that Troy was laid siege for ten years, in the end being conquered by King Agamemnon and his army during the Trojan War. The earliest account of this war is told by Homer in his well-known epic tragedy, Iliad. According to the researches, it is estimated that Trojan War occurred around the end of the Bronze Age is around 1200 B.C, when a civilization, later called Mycenaean, was beginning to flourish in Greece.

The Mycenaean civilization had a developed architecture and originated its own system of writing. According to Homer’s Iliad, the reason behind this war was the abduction of Helen, the glamorous queen from Sparta. Paris, the son of Troy’s King Priam, seduced and abducted the beautiful Helen.  You find a rebuilt Trojan horse at the entrance of the site. Belonging to the 1970s and getting historical itself, it is an inevitable part of visiting Troy city. This wooden horse is built in memory of the Trojan Horse that the Greeks used to enter the independent city of Troy and win the Trojan war.

A futile 10-year siege ended by the Greeks building a huge wooden horse to secretly hold a select force of men. The Greeks pretended to sail away and surrender. They presented the horse at the gate of the city as a gift. The Trojans pulled the wooden horse inside as a victory trophy and celebrated their victory.  At night, when the ceremony ended, and everyone fell into a deep sleep, those inside the horse came out and opened the city gates for the rest of the Greek forces.

Things to Do in Your visit to Troy

Immediately beyond the entrance to the site of Troy, you can see the reconstructed Homeric wooden horse. It may interest you to climb the ladder up into the horse’s belly to take a look out of windows cut into its sides (which probably didn’t feature in the original one).

A few steps west, the city ruins veil an outcrop neglecting the Troad meadowland, which expands about 8km to the sea. A circular path takes you around the site, with twelve descriptive boards telling tales about the ruins of the site. Standing on what’s left of the battlements and glimpsing the plain, it’s not too difficult to visualize a beleaguering army bivouacked below.

The most spectacular remains are the east wall and gate from Troy VI, curving around the eastern and southern flanks of the city. Angled towards the inside, the walls would have been crowned by a supplemental brick section.

A ramp paved with flat stones leads to the citadel entry, also stands out, as does the adjacent partially reconstructed Megaron Building (shielded beneath a huge canvas roof) from the same age, the bricks of which changed their color to a bright red as Troy II was burning in flames.

Schliemann incorrectly used the trace of this fire to judge that this had been Homer’s Troy and that the coins he found here made up “Priam’s treasure.”

The most important memorial of Greco-Roman Troy is the Doric temple of Athena. Alexander the Great’s general, Lysimakhos, rebuilt this temple after Alexander visited this place and left his shield as a gift. Troy was a main religious center during the Greek and Roman eras.

Cimenlik Castle, called Kale-i Sultaniye before, today serves as a military museum. Fatih Sultan Mehmet in 1462 built this structure, and later in 1927, it was converted to be a museum.

Besides the existent hoard of artillery in Çimenlik Fortress, materials donated by people and private foundations were brought together and used to enhance this collection. During this deed, a team of volunteer archaeologists also explored the battleground. Furthermore, records and stock lists were rigorously researched.

Straight across the Narrows of the Dardanelles settles the magnificent fortress of Kilitbahir, meaning the Lock of the Sea. Like Çimenlik Castle at Çanakkale, Fatih Sultan Mehmet built this structure. The two fortresses kept an eye on the Narrows from any navy coming from Europe to assist Constantinople, which was under siege by Sultan Mehmet at the time.

If you head on to the southern road out of Kilitbahir, you come across a number of historic earthen gun battlements and concrete bullet bunkers. They were constructed in the 1890s and 1915, took part in the defense system of forts, battlements, and mines set up to avert foreign naval movement through the straits. 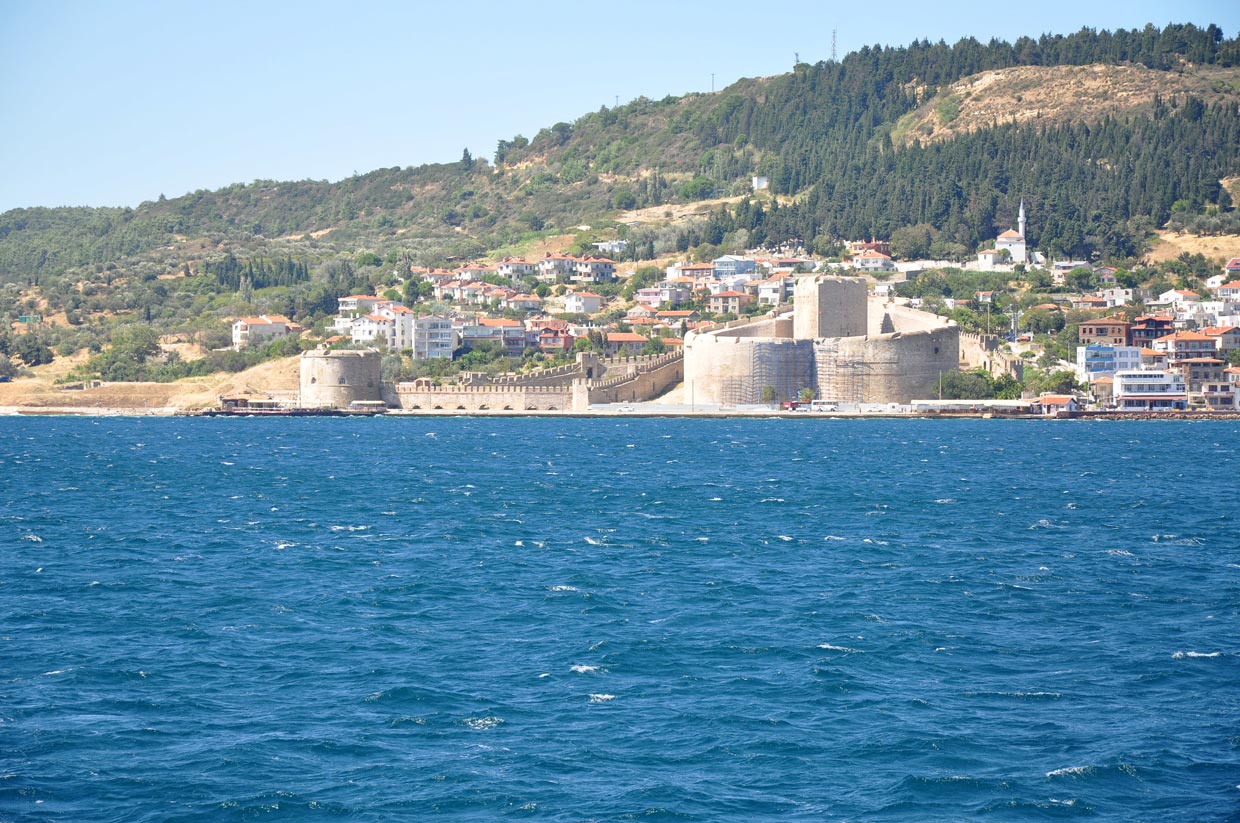 This battlefield is not so vast in comparison with those in Europe. You can observe most of the sights in less than a day as the whole region is a National Park, so the remains are very well-preserved. You can find prehistoric walking traces all along the area. Once one departs the area next to the tarred pavement, the area hasn’t changed much since the Anzacs left it.

You may see the abraded ruins of the old trench lines, filled with scrubby blooming. As you walk around, you can see shrapnel balls everywhere. Remember to be careful about the snake when wandering in the scrub. Some of them are evidently quite violent. 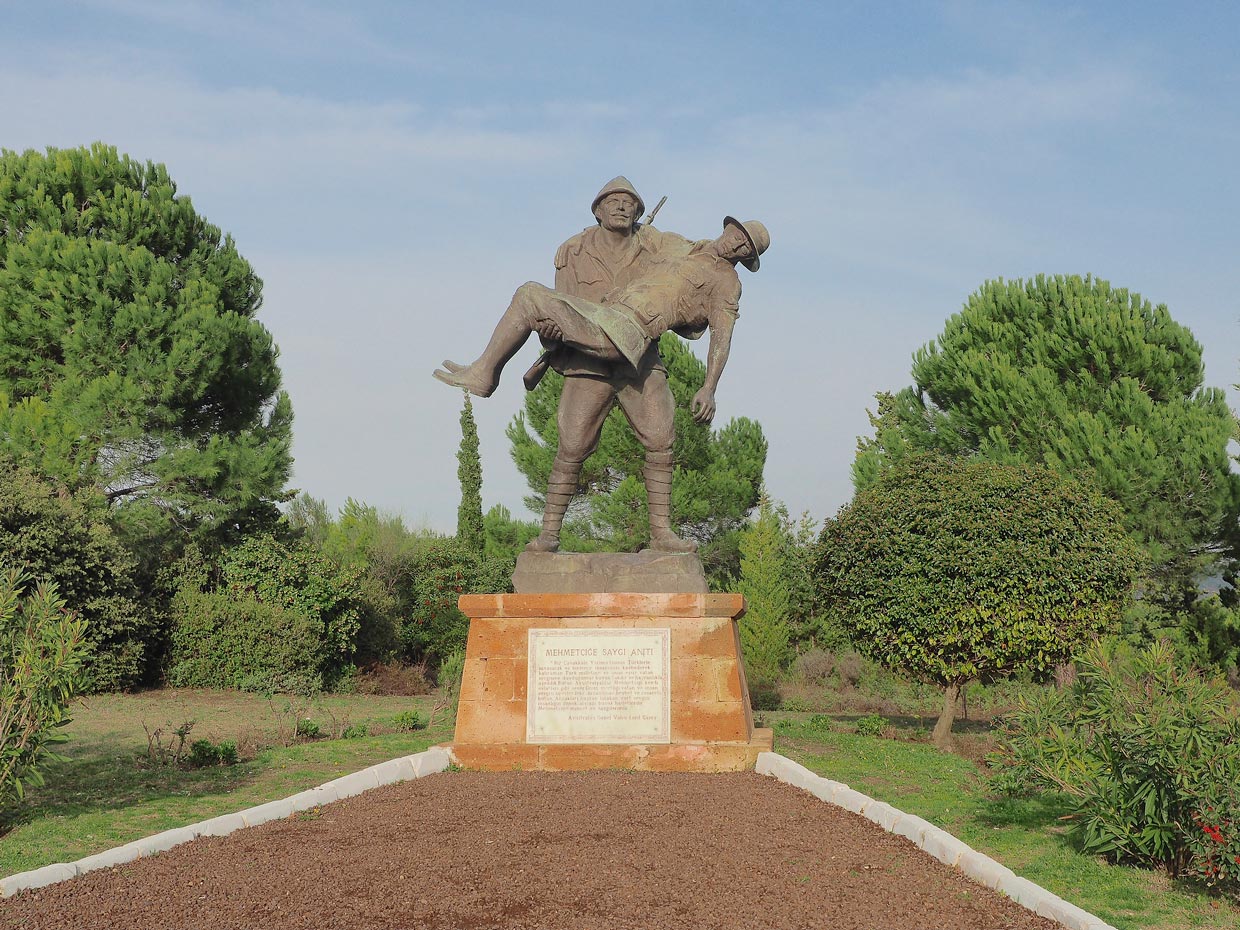 The Gallipoli or the Dardanelles Campaign was a First World War campaign that was constructed on the Gallipoli Peninsula in the Ottoman Empire. The Peninsula shapes the Dardanelles’ northern bank, strait providing a sea path to the Russian Empire, one of the Allies during the world war.

Aiming to protect it, Britain and France started a naval attack followed by an amphibious arriving on the Peninsula with the ultimate goal of conquering the Ottoman capital of İstanbul.

The naval attack was repulsed after eight months of fighting, causing many victims on both sides. The land campaign failed on its purpose, and the occupation force was withdrawn to Egypt.

Getting in and Getting Around

Çanakkale is about 35 km to the north of Troy and is considered the nearest main center. You can travel to Troy by mini buses or cars. It takes about 45 minutes to arrive there.

If you are driving to Troy, keep in mind that there are no signs when you approach the crossroad where the road to Troy crosses the main highway, but a brown one right inside the junction, so lower your speed when you are 30 km out of Çanakkale and expect the junction anytime.

The route through the remains is well marked, but it gets quite rocky and slippery in some places. Make sure to wear suitable hiking shoes.

Where to Go Next

The remains of Alexandria Troas, an ancient city established by Alexander the Great’s general Antigonos I, is located 30 km south of Troy and 2km south of Dalyan village. This archeological site includes mostly Roman ruins like an agora, some baths, and a strange structure with unknown function encircled by 8 km of the city wall. 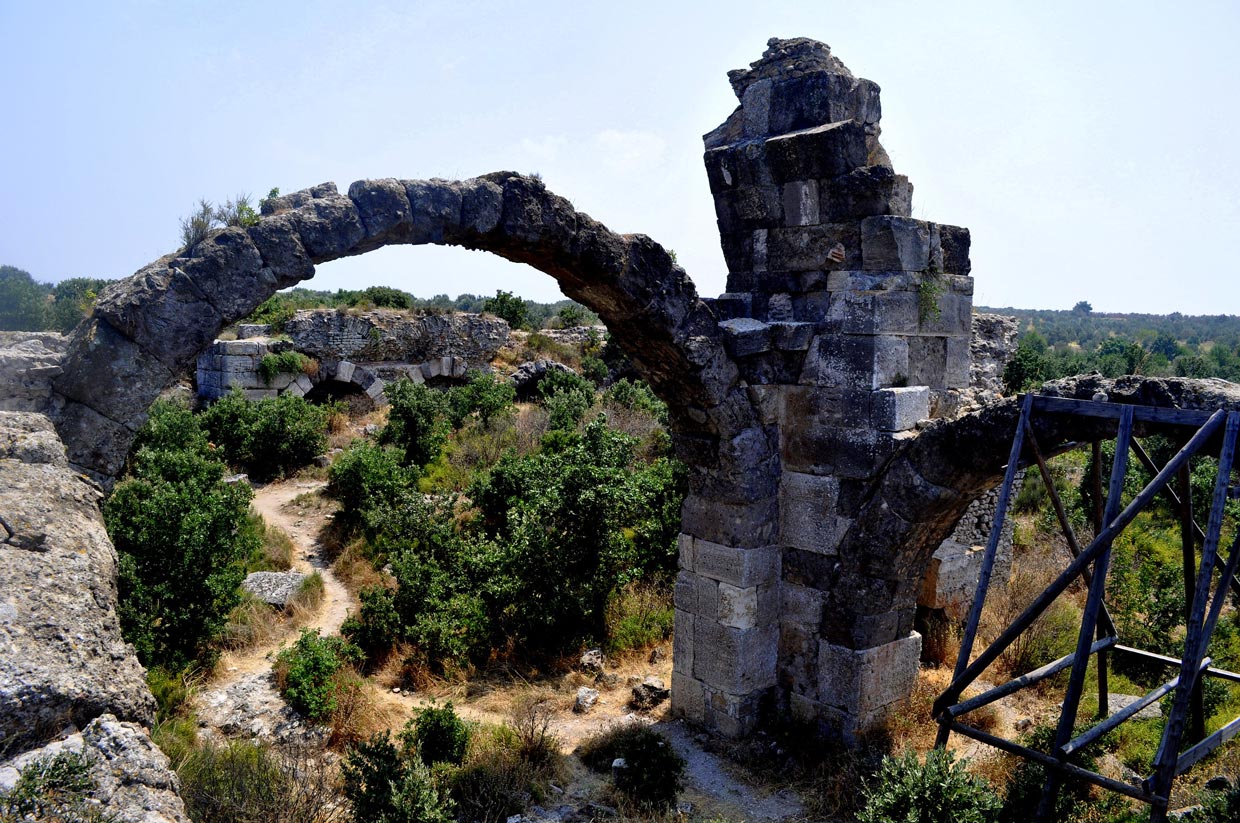 Fans of Homer and literature, as well as nature lovers, will probably find visiting Mount Ida fascinating. According to the Homer poems, this mountain is the place where gods caught the sight of the epic battle below on the grounds of Troad. You can take both the northern and southern exciting routes to the mountain.

Bozcaada, or ancient Tenedos, an isle in the Aegean Sea with a well-preserved old town and a Venetian citadel, is so close that it can be seen with bare eyes from Troy. Geyikli port, where you can take a sea route to Bozcaada, is less than 10 km away from Troy.

You can also keep going southwards via rural paths along the coast. On your way, you pass unique villages, and some other ancient Greek remains grounded in the astonishing Mediterranean landscapes. 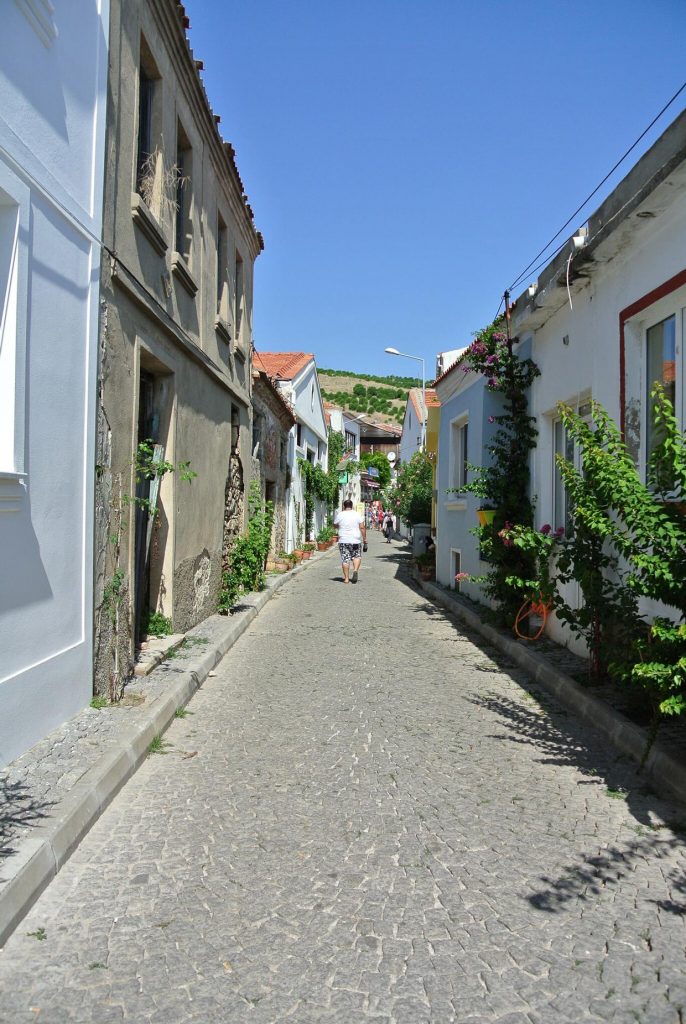 Hopefully, the weather condition in Turkey is not a very special one and it’s easy to get around in every season. Of course, the best time to visit this country and particularly Troy varies for each person. To make it easier to decide, here you can see the average temperature of Troy, Turkey.

Did you know that the word trojan in computer sciences referring to any malware misleading users of its true intent comes from the legend about this city?