Suppose you’re interested in Hindu and the cultural background of Hindu. In that case, you’re most likely familiar with the beautiful and majestic Pashupatinath Temple, the oldest Hindu temple, which is located near the Bagmati River in Kathmandu. It is one of the most important and popular pilgrimage destinations in the world. Even if you’re not religious, Pashupatinath is still a must-see and a great way to meet and interact with the authentic local culture of Nepal.

Suppose you’re interested in Hindu and the cultural background of Hindu. In that case, you’re most likely familiar with the beautiful and majestic Pashupatinath Temple, the oldest Hindu temple, which is located near the Bagmati River in Kathmandu. It is one of the most important and popular pilgrimage destinations in the world. Even if you’re not religious, Pashupatinath is still a must-see and a great way to meet and interact with the authentic local culture of Nepal.

Where is the Pashupatinath Temple

Pashupatinath (Pasupatinath पशुपतिनाथ मन्दिर) is on the eastern side of Kathmandu, Nepal’s capital city. This UNESCO world heritage site comprises 492 temples, ghats, and shrines dedicated to Lord Shiva. Interestingly, shiva, alongside Brahma and Vishnu, are the three most important Gods of the Hindu religion.

Shiva is, in fact, the Lord of destruction and re-creation. Although entering the main temple is not possible for non-Hindus (tourists and foreigners), there are still so many things to see and enjoy. You can get to the temples by Taxi, a Bus (you must tell the driver to stop at the Gaushala or Mitra Park), or by using special Nepali apps that work with bikes (Tootle) and cars (Pathao).

How to Travel to The Pashupatinath Temple

Since the best times to visit Pashupatinath are early mornings or during evening prayers, you must find a place to stay for the night. It is also advised to eat before you get to the temples since there are no ‘real’ restaurants in the area except for a few (overpriced) snack bars.

Where to stay in Kathmandu

Aside from the temples, Kathmandu has a lot to offer, so it would be best if you stayed for at least a week in the city. Kathmandu is heaven for travelers since you can find a place to stay accommodated to any budget, luxurious hotels, and guesthouses!

The prices in Kathmandu are standard; the cheaper things are, the poorer is the situation, so if you’re not backpacking, you should really spend a few more dollars for something more comfortable.

The cheaper places to stay (guesthouses and single beds in hostel dorms) are around 400 to 2,500 NPR depending on the location and the facilities. The more expensive options like large hotel rooms can go up to 25,000 NPR. These are a few places you should check out while in Kathmandu :

Located at the town center, Thamel is a great place to meet and hang out with other tourists. It’s pretty close to most of the tourist sights in Nepal, and the local culture is lovely to witness.

If you’re looking for more authentic and luxurious accommodation, Patan and its beautiful traditional Newari-design hotels are a great choice.

If you have a bigger budget and can’t stand the noise in Thamel, you can still stay near the town center in Lazimpat, which is near the most popular attractions and restaurants in the town! 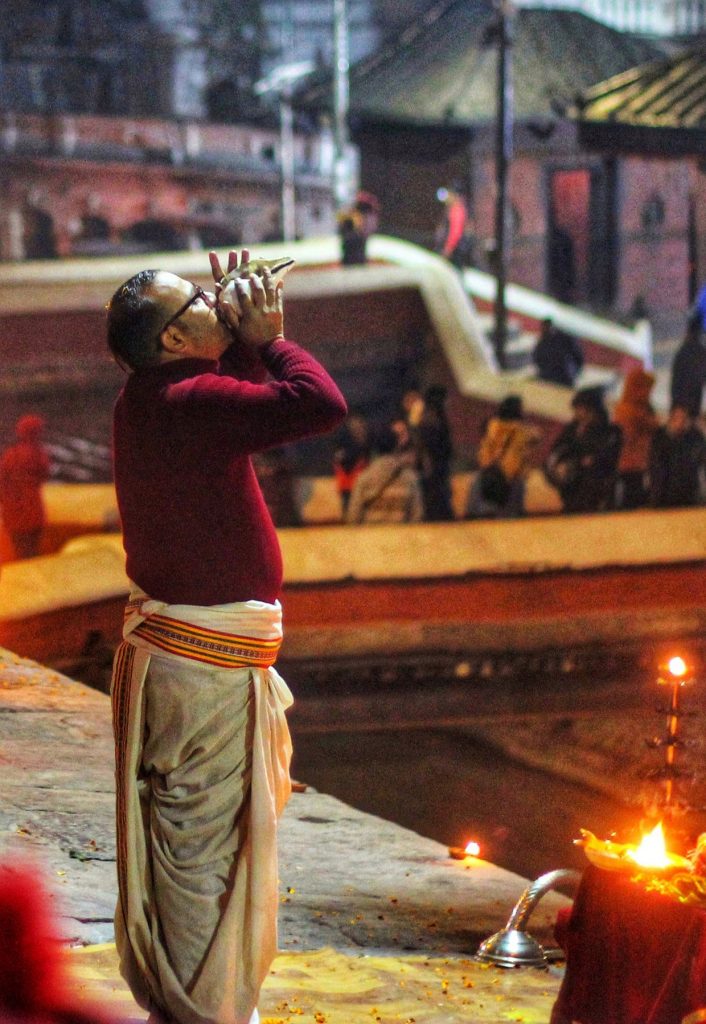 Since it is an important religious place of worship, you should try and dress modestly to be respectful; covering your legs and shoulders is enough. The locals expect you to be respectful of their holy places and customs.

A Short History of Pashupatinath Temple and The Pilgrimage

The construction of the first temples has a lot of legends around them; one of them explains that during a fight with the other Gods, Shiva lost one of his horns. The horn was buried under in the place that now stands the main temple of Pashupatinath, and a cow irrigated it daily with her milk until the herdsmen dug the earth and uncovered the lost horn.

That horn, which is now inside the temple, is the first Shiva Lingam that the Hindus worshipped. Another story states that the wooden temple, which was the foundation of this temple, was made by a Lichhavi King known as Supuspa Deva, but a legend denies this statement by narrating that a lingam already existed in this place and the king only built a five-story temple over the lingam.

Dating back to the 5th century (most likely 400BCE) but sadly, the main temples of Pashupatinath were destroyed by termites but got rebuilt in the 17th century. Unfortunately, that kind of destruction has happened to many of these temples and caused them to be gone these days.

This UNESCO-protected site welcomes nearly one million devotees from all around the world every year during the festival known as Maha Shivaratri (meaning ‘The Night of Lord Shiva’), so it might be interesting to coordinate your visit with it.

Another popular festival that happens in Pashupatinath is Teej. It is a three-day-long Hindu festival dedicated to Lord Shiva and his wife, Parvati. During this program, you will see thousands of Hindu women in red sarees gathering at the temple. 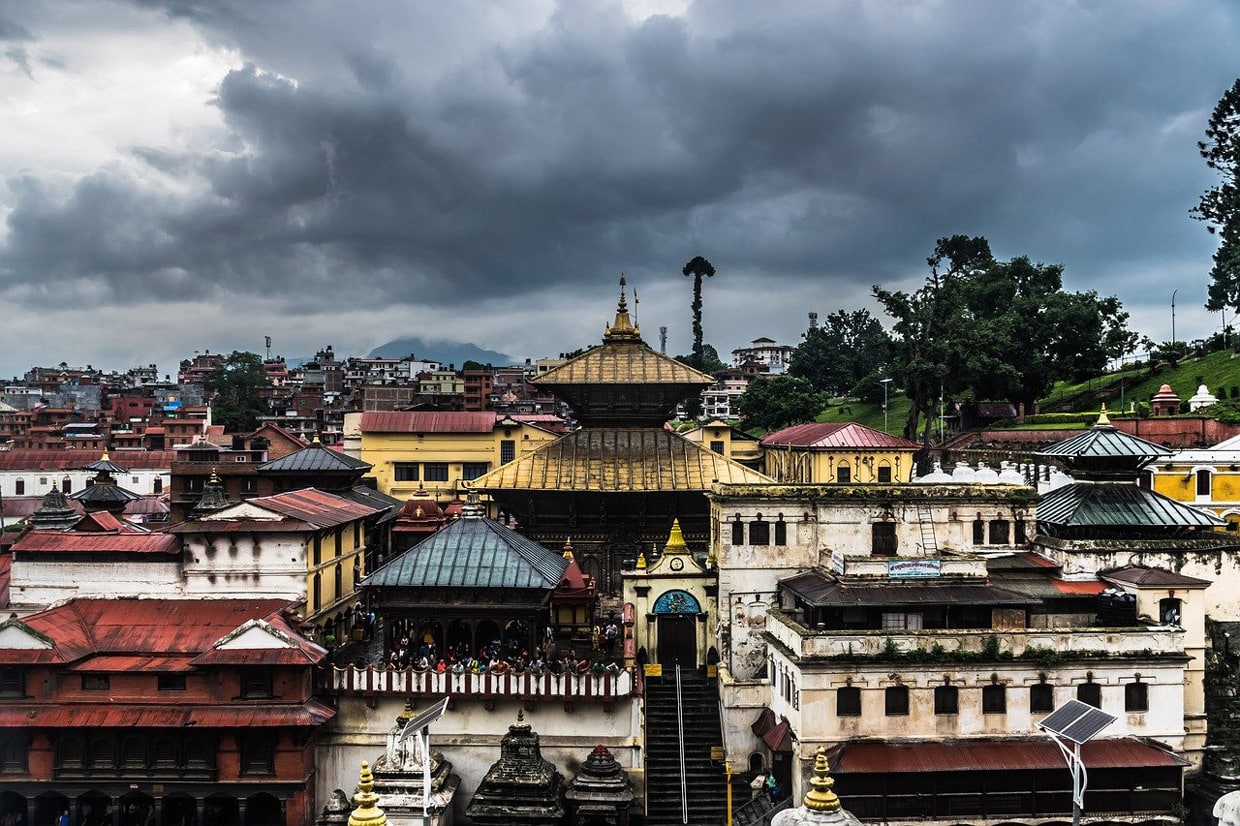 What to do in Pashupatinath Temple

Since the area of Pashupatinath Temple is so big and detailed, most tour guides don’t know how to articulate it fully. So they fall short and decide not to show anything more than necessary altogether. So we advise you to remember these notes while you visit the temples! Please note that you do need to pay a rather pricey fee before entering the area.

The area is not just lovely during the festivals; it is also home to 492 temples designed in different eras with different styles so that the lovers of architecture would enjoy them. There are temples in the style of Pagoda (Malla architecture), a dome style (Mughal architecture), and shikhara style.

Lingam, or notably known as Shiva Lingams, is an abstract representation of Lord Shiva. They are most likely shrines made with stones; you can find most of them on the eastern side of the river.

The Eastern Ghats are where they perform specific rituals and baths. Each Ghat has a special meaning that you can research on.

Take Pictures from the Viewpoint

If you don’t want to be near the Ghats during the programs, you can just cross the river and go up the hills. There you can enjoy a panoramic view of the entire temple area.

Converse with The Sadhus

Sadhus are Hindu Holy Men; they are religious yogis who have renounced their worldly life and try to escape the cycle of life and death via meditation. You can spot them by the red color on their face and body, do not be afraid of interacting with them because they enjoy talking to tourists and have a lot of wisdom to give!

There is a rather large market in the area, and they sell all sorts of goods and religious souvenirs. There are also fruits, flowers, and tika powder for anyone who wishes to make offerings to Lord Shiva.

The Bagmati River is considered sacred and holy in Hindu culture. Many from all around Nepal come to live their final days at the temple and pass away there, near the holy river. Many also bring the ashes of their loved ones to scatter in the river. It is also where the ritual baths take place. Unfortunately, even though the river is considered very sacred, it is quite polluted. Fortunately, many cleaning companies are now working to make it better.

Votive shrines are shrines dedicated to different Gods of Hindus. They are quiet and lovely places to meditate and pray just across the Bagmati river.

When you go past one of the shrines, you see a beautiful forested area perfect for a nice walk to clear your head!

Check Out the Statues

The area is filled with many magnificent statues of Hindu Gods and Deities. However, the one that gets the most attention is Kalki, the human form of Lord Shiva. It is half-buried in the earth, and the legends say that it is growing over time to finally leave the ground on the final day of the universe to begin a new world.

Overall, no matter if you’re Hindu or not, you will enjoy this lovely place. You should also combine your visit with another UNESCO world heritage site near Pashupatinath, called “Boudhanath stupa.” They are minutes away from each other.

Be careful of the roaming monkeys and cows; the monkeys are known for their great pickpocketing skills and will take any shiny thing they see! You can also get fruits and feed the monkeys while you watch the cremations and other rituals.