Boudhanath Stupa, Nepal – One of The World’s Greatest Stupas

Boudhanath stupa in Nepal is one of the most well-known stupas globally, located in a city called Kathmandu, 6.8 miles away from the eastern center of the city. It's a huge opportunity for travelers who are interested in Buddhism culture to visit this magnificent site.

The stupa is originally a Sanskrit word for a religious building that holds different relics like pearls called śarīra, and they are mostly made for Buddhists. Around most of the Stupas, there are paths for a religious practice called “pradakshina” which is also practiced by Jainists and Sikhists.

One of the most famous and greatest stupas around the globe is the Boudhanath stupa in Nepal located in a city called Kathmandu, 6.8 miles away from the eastern center of the city. This stupa is situated on the historic trade road from Tibet that will enter the Kathmandu Valley.

It is mentioned in Tibetan manuscripts that emperor Trisong Detsen built the stupa, while Nepali literature claims it was constructed further back during the reign of King Manadeva and further again to 400 CE during Licchavi King Vikramjit’s reign when it records refer to a Kasti stupa.

The tale of King Vikramjit relates the Narayanhiti palace in Kathmandu to the formation of the stupa. It’s alleged that there was a horrible drought in the Kathmandu Valley, so the King sought advice from astrologers. They said that the drought would cease if a man with thirty-two virtues was presented as a sacrifice. The King ordered one of his sons to go to Narayanhiti at night, where he will meet the man of virtues.

The King’s son had to close his eyes before sacrificing this man to put an end to the drought. Devotedly the King’s son accomplished the demand only to cower in dread after the act to find out he had killed his own father. The drought finished, and the King’s son consulted the priests to compensate for his act. They said he should set a flying hen free, and wherever it would perch, he should construct a stupa.

The hen perched where the stupa is positioned today near the Ajima shrine that was under construction at the moment. The region had been extremely affected by the drought, and so natives had been gathering Dew in the morning. Recently the word “Khasu” (खसु) is used to refer to Dew, while the name “Ti” (ति) means droplets. A merger of the words makes the word Khāsti which means Dewdrop Stupa. So the first investigated title for Boudhanath is Khasti or Khasa Chaitya.

There may be a connection between Boudhanath and Swayambhunath, which includes Natha, one of the Hindu cults which believed in Buddhism as well as Macchindranāth. But Boudhanath doesn’t have any documented history involving Natha. However, the existence of the Ajima shrine may be another evidence that the Goddess is appreciated by Buddhists and Hindus alike. 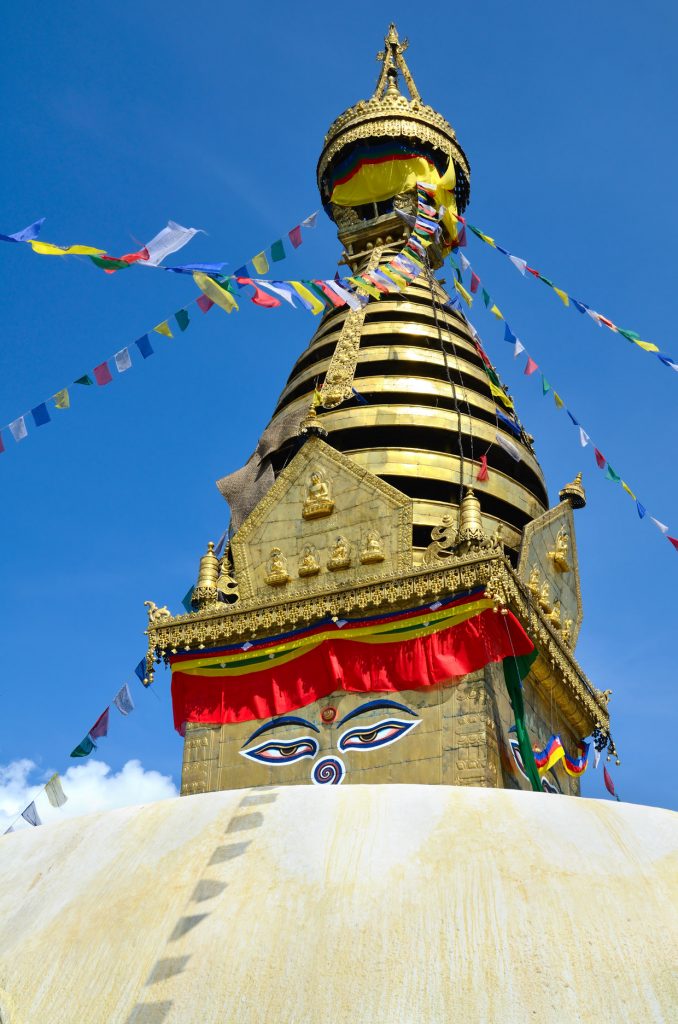 The construction being highly symbolic, presents in essence as a concrete nudge of the Buddha’s pathway towards enlightenment. The plinth symbolizes the earth, while the Kumbha (dome) represents water, the Harmika (square tower) is a symbol of fire, and the spire shows air. There is an umbrella at the top which means the abyss or ether beyond space. The 13 stages of the spire embody the 13 levels that human beings must pass through if they want to attain nirvana.

In the first place, stupas were constructed to hold holy relics, and some declare that Boudhanath accommodates the relics of the past Buddha, Kashyapa, while others claim it houses a piece of bone from the skeleton of Siddhartha Gautama, the historical Buddha. There are 108 tiny images of the Dhyani Buddha Amitabha (108 is known to be a lucky number in Tibetan culture) and a ring of prayer wheels, set in groups of four or five, around the settlement of the stupa.

To arrive at the higher level of the plinth, one should seek the northern gateway of the stupa, close to the small shrine devoted to Hariti (Ajima), the Goddess of variola. The plinth offers a raised perspective over the tide of worshippers rushing around the stupa. Note the committed pilgrims are lying down on the ground of the courtyard on the east side of the stupa. 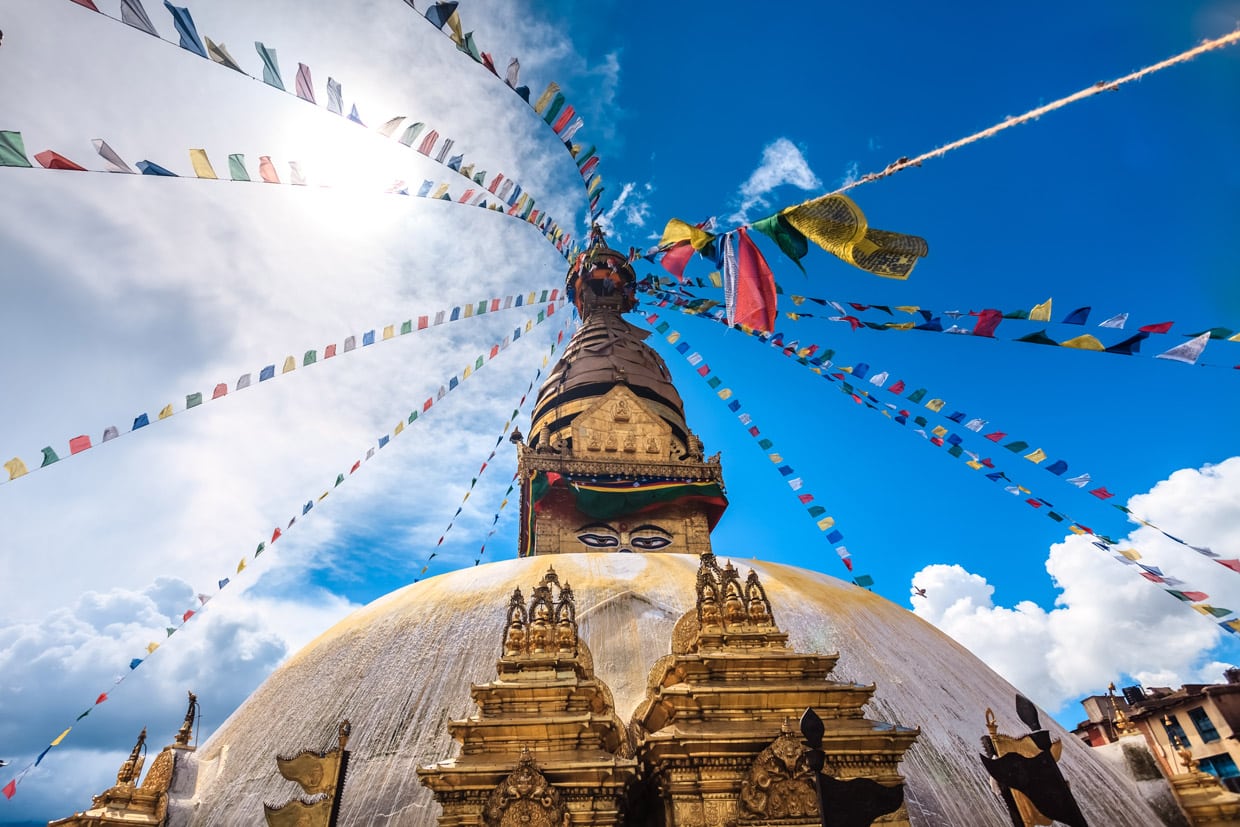 Things to Do and Places to Visit Nearby

There are more than twenty monasteries (Gompas) around Boudhanath that we recommend you to visit. Although they look close on the map, and some of them are actually close, you can find some of them open on the small side lanes. Tamang Gompa is one of the most famous and popular among them. However, you can have a more solitary experience by visiting less known monasteries like the old and new Dazang monasteries.

Tourists also rarely visit the north Shechen Gompa, and there are several monks in residence there. Please remember that the monasteries are not tourist attractions meaning that you can visit with your cameras blazing. Doing so probably will cause a monk or caretaker to drive you out. If you know a little bit of Nepali or Tibetan, it can open doors for some understanding of Buddhism.

There is a historical walkway just on the northeast side of the stupa. However, it can be considered more as a “peaceful short walk away from the everyday busy life” rather than a collection of historical objects. At the end of the walk, where you reach near the Hyatt hotel, you will be close to the notable and privately owned Taragaon museum. Inside are exhibits from a variety of painters, photographers, and artists showing both local and international viewpoints on Nepal, from historical traditions to contemporary modern lifestyles. It is a museum you better not miss the opportunity to visit.

There’s no scarcity of souvenirs in kiosks and shops around Boudhanath stupa. Adjacent to the stupa, you shall find shops selling Himalayan bowls, jewelry brass work, and aromatic incense. Devotion flags are found all over the place, along with Thangka portraits. Prices in Boudhanath differ from those in Kathmandu. It may help to know average prices. It is common here to bargain about the prices during the buying process. 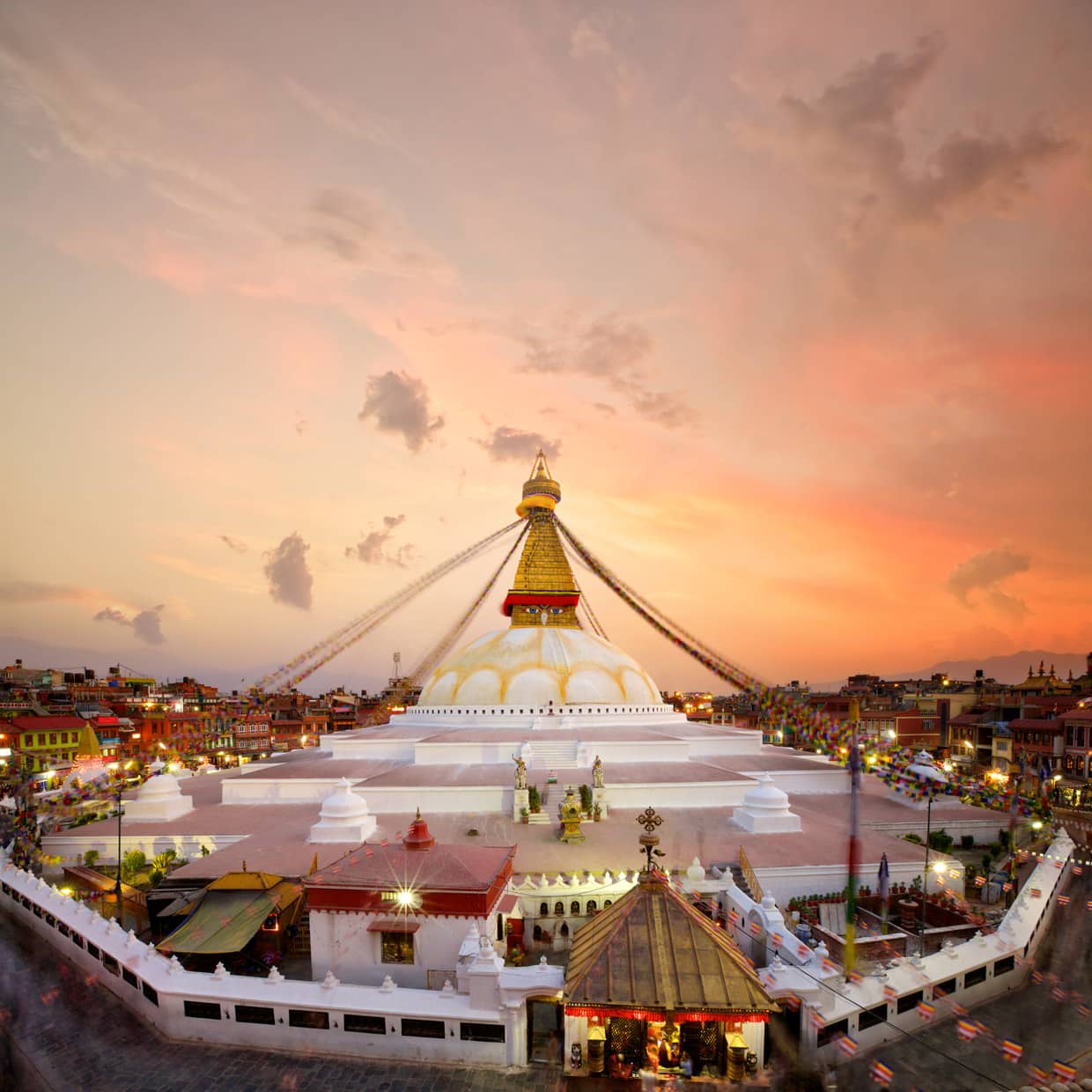 You can take a taxi to take you to Boudhanath. This is the most common way among tourists for transportation. Compromise on a price for your transport before you get in the cab. You should leave the taxi at the Boudhanath main gates.

If you seek an adventurous experience, you can try getting to Boudhanath from Kathmandu city by minivan bus. The minivans drive directly to Boudhanath, leaving the city from around Ring road. 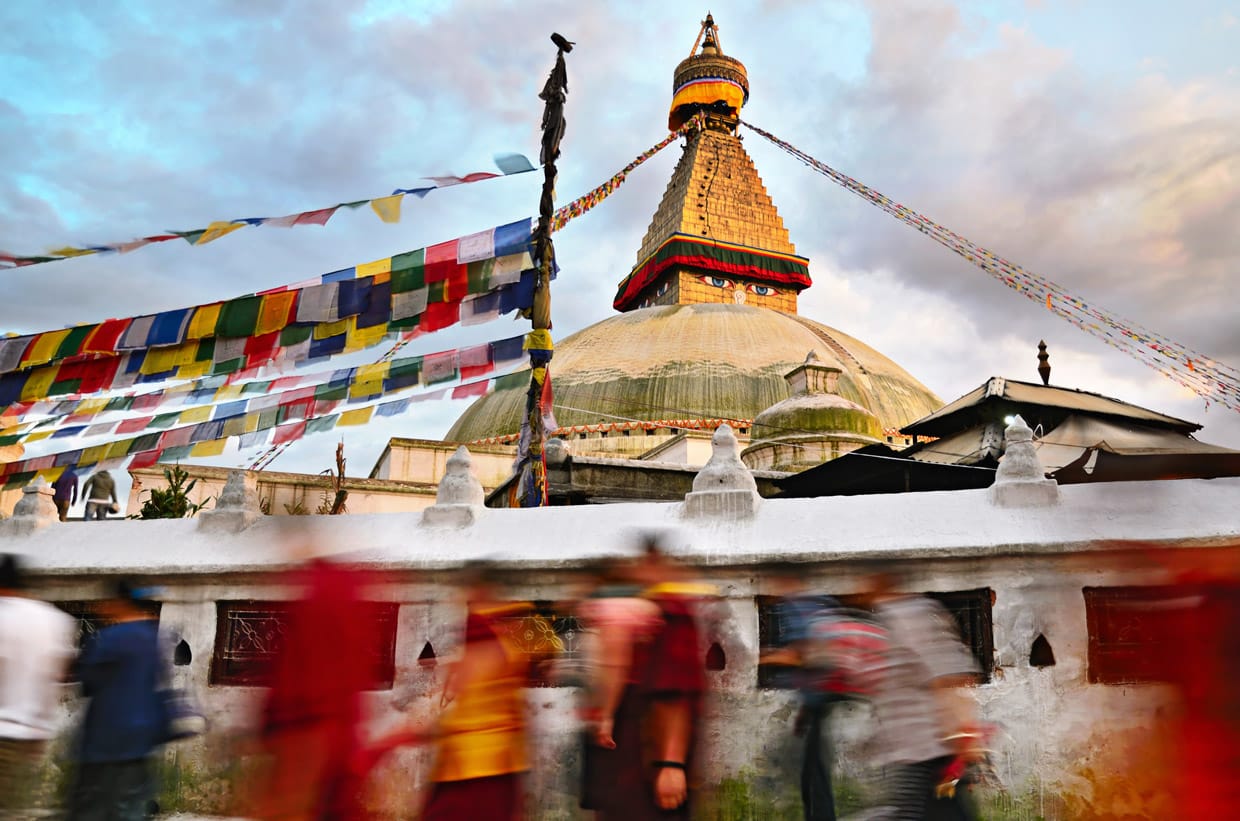 Places Nearby for Resting and Having Food

There are different hotels in the neighborhood of Boudhanath Stupa with variant price ranges. While Hyatt Regency Kathmandu is considered to be a luxury hotel to reserve, Green Hotel Kathmandu and Khumbu Hotel are known to be mid-rage. There are also warm guest houses like Boudha Stupa, Pema Guest House, and Samdrup Guest House that can house you.

There’s no lack of good restaurants and cafes around the Boudhanath Stupa. Though many people emphasize Tibetan-style food to be considered the local food here, there is an extensive collection of places to serve food akin to restaurants in Kathmandu. Flavors restaurants and stupa view restaurants are good choices for eating food, while people choose cafe du temple and roadhouse cafe for drinking a nice warm cup of tea or coffee.