Tianfu Square is the largest square and the symbol of Chengdu, surrounded by many attractions such as the Chengdu Museum, Sichuan Art Gallery, and Chunxi Road.

Located in the center of the city, Tianfu Square is the largest square in Chengdu and southwestern China. The square has the same status and fame as Tiananmen Square in Beijing. You can find the statue of Mao Zedong, former Chairman of the People’s Republic of China in this location. Also, Tianfu Square is considered the symbol of Chengdu covering an area of 88,368 square meters (105,687 square yards) surrounded by skyscrapers. (Photo by © Jeremy Thompson via Flickr)

Here is the busiest part of Chengdu’s Commercial and Business District. It acts as a popular destination for both locals and tourists alike. Because of its location, many people consider the square as a gathering place. It is covered with light-colored granite and there are many trees and flowers around. Tianfu square is the perfect place to enjoy Chengdu’s modern development.

Tianfu Square is like Taichi Motif (curve of Taijitu) because of the s-shaped line dividing the square into two parts. In the center of the square, you can also see a pattern like the Golden Sun Bird. Golden Sun Bird is a ring-shaped foil and a historical object, which was unearthed from the Jinsha Ruins in Chengdu in 2001.

On the west side of the square, you can find a statue as a fountain. There is also another statue on the east side of the square, which is sunken. These statues are placed symmetrically opposite, and there is a dragon circling the pillar of both figures. These dragons represent the Yangtze and Yellow Rivers’ civilization, as they have been the cradles of Chinese civilization and they are also China’s longest rivers.

Tianfu Square also features musical fountains, which add a little bit of excitement to this place. In the evenings, the music fountain starts its fantastic show with many colorful neon lights, leading to a romantic atmosphere in Tianfu Square. 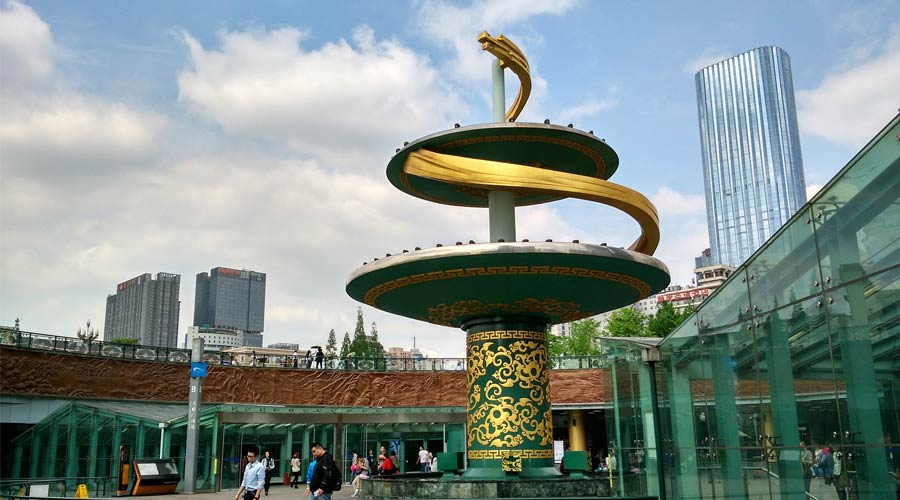 The square has surrounded by many attractions and shopping malls.

On the north side of Tianfu Square and right behind the statue of Chairman Mao, you can find the Sichuan Science and Technology Museum. Here, people can gain a better understanding of the essence of great projects in robotics, aerospace, and virtual reality. The museum is open to visitors at 9:30-16:30 from Tuesday to Sunday. Keep in mind that you cannot enter the museum after 15:30.

If you walk for about three minutes in the direction of the northwestern side of Tianfu Square, you will reach the Sichuan Art Museum. It is a modern building with a height of around 38 meters (98.5 feet). There are many famous paintings collected here in various styles such as the classic works of Xu Beihong, and Zhang Daqian.

Besides the Chinese painters, the Museum regularly holds exhibitions of artworks from different parts of the world. So far, there have been exhibitions by artists from Taiwan, Japan, South Korea, France, Denmark, and many more. This art gallery can be an exciting experience if you are interested in Chinese art and other parts of the world.

Chengdu Museum is located on the western side of Tianfu Square. The museum is one of the largest galleries in this region and features valuable archeological discoveries of Sichuan. Chengdu museum is divided into three sections, which are general history, folk customs, and shadow puppets. The shadow puppet section shows a traditional Chinese folk art form and it’s especially attractive to tourists.

If you go for around 300 meters (328 yards) to the west of Tianfu Square, you can get to the Imperial Mosque. The mosque was built in the 16th century and it is among the most famous ones in southwestern China. The mosque has an ancient character and its arched doors, as well as other architectural features, can be quite surprising.

If you cross the street to the east side of Tianfu Square, you will reach Jincheng Palace of Fine Arts. There is a big billboard outside the palace to inform about upcoming shows. The place has a very majestic vibe with its water pools and different shaped fountains. It is the center of art communication in which, you can find many shows and performances by famous stars, dancers, opera troupes, and orchestras. Jincheng Palace of Fine Arts also hosts worldwide artist performances.

Located one kilometer (0.6 miles) away from the west side of Tianfu Square, People’s Park is a gathering place for locals to spend their leisure time. If you go for a stroll inside the park, you can see a lot of elder people singing happily and dancing in groups. There are also many children here playing in the beautiful gardens alongside others drinking tea and enjoying the game of Mahjong. There is also a lake in the park, where many kinds of fish are swimming. The park is open to visitors from 6:30 to 22:00. 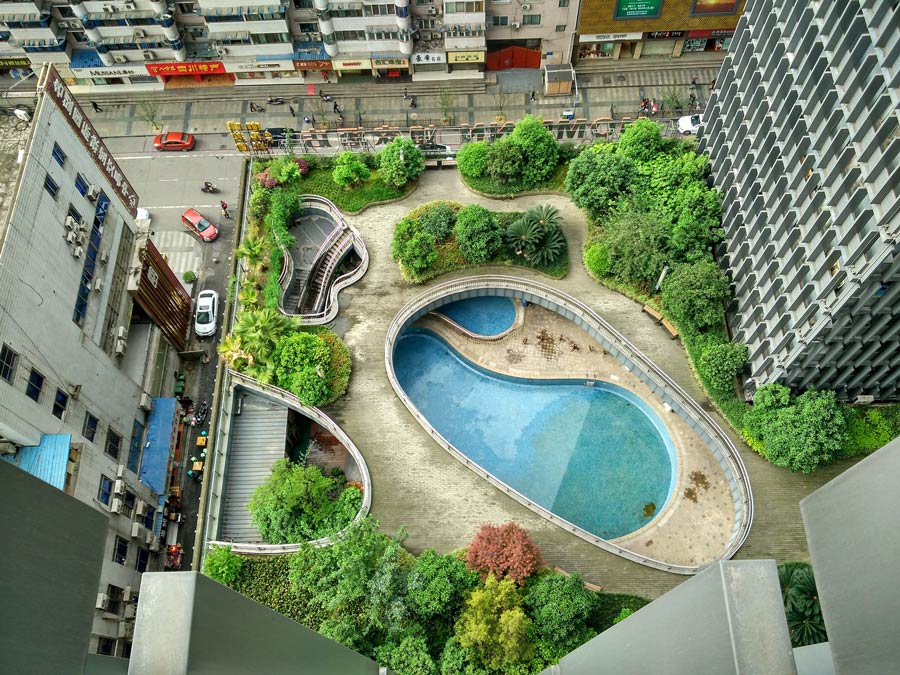 Hotels near the Tianfu Square

Tianfu Square architecture is a mixture of Chinese traditional architecture and western landscape art. The symbols in the square demonstrate many aspects of Chinese culture. For instance, the Curve of Taijitu is the symbol of Chinese Taoism and the Golden Sun Bird symbolizes China’s intangible cultural heritage. Make sure to visit this square with the attractions around it and share your experience with us. Also, our professional guides are prepared to reply to your questions about Tianfu Square as soon as possible.