Tang Paradise, aka Datang Furong Yuan, is a huge and stunning Chinese royal garden dating back to the Tang Dynasty and known as the largest theme park of Xi'an.

Located In the ancient and lovely Xi’an, Tang Paradise is a theme park established in 2004. This park is divided into multiple areas with unique cultural themes. These areas show the food, folk culture, tea culture, singing, dancing, diplomacy, imperial examinations, and many more during the reign of Tang Dynasty emperors.

Inside the Tang Paradise

This park is about the Tang Dynasty and it is filled with symbolic uses of their architecture. Some of the worthy examples of the Tang Dynasty architecture inside the park are Tang Market, Luyu Tea House, Royal Banquet Hall, Fengming Jiutian Theatre, Apricot Garden, Fanglinyaun Hotel, Maid Building, and Purple Cloud Building.

Besides the charming buildings, you have the opportunity to enjoy numerous performances including lion dance, royal dance, drum dance, Shaolin Kung Fu, acrobatics, stilt walkers, and many more. Also, there is a water show in the park that is very large and modern, which creates amazing 3D visual effects.

Added to wishlistRemoved from wishlist 0
Add to compare
From: $675.00

Located inside the Purple Cloud Building, The Emperors Cultural Area is the landmark of the park, which represents the Tang Dynasty’s supreme emperors. Purple Cloud Building was originally built in 726 and it was visited by Emperor Xuanzong (685-762) of the Tang Dynasty during festivals. The building is reconstructed on the ruins of the old building.

The first floor has cultural relics, sculptures, and a large replica of Xi’an (when it was the imperial city of Chang’an). It also focuses on Zhenguan, the era of Emperor Taizong (599-649), which is considered as a prosperous time for China.

The third floor is a performing hall where you can see the Royal Dance show alongside Chinese music.

The fourth floor is meant for entertainment purposes. 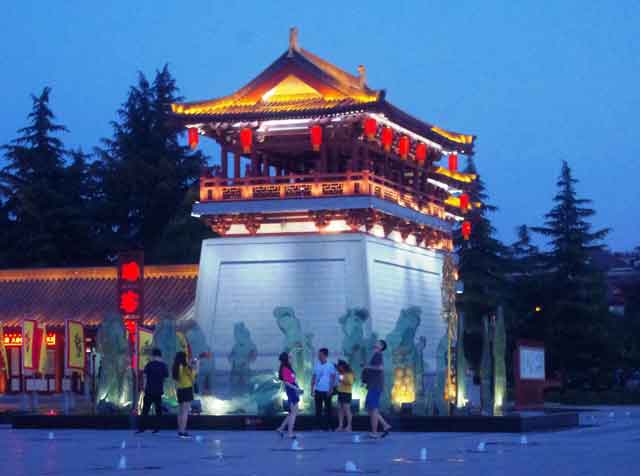 This splendid show is performed on a lake, just across the Purple Cloud Building. This is a truly large-scale show, which features fountains, laser, changing visual effects, and music. There is also a fantastic water curtain movie named Da Tang Zhui Meng. It is about the ancient Tang era of China and ends with a dragon flying with sparkles.

If you go southward from the Purple Cloud Building, you will reach the Fengming Jiutian Theatre, a royal world-class modern theatre. Dream of the Tang Dynasty, which is a dramatic singing and dancing show, is performed here. This show is highly adored by most visitors.

This area is situated in the north of the Tang Paradise West Gate. It is a themed dining area with a buffet and the grand royal banquet halls of Tang style. The buffet can conveniently provide you with different kinds of foods and the banquet halls are great places to cater to different events even weddings.

Folk Culture Area includes the Square of Theatre and the Tang-style market. It is built as a miniature version of the ancient Tang Market. Here in the cultural street, you can see food, wine, tea, acrobatics, handicrafts, calligraphy, painting, lion dances, stilt walkers, and Shaanxi Opera. There is also a five-star hotel here named Fanglingyuan, which has an amazing design.

This area is about the tea culture of the Tang Dynasty. Tea Culture Area contains a top-grade tea house named the Luyu Tea House. This place features folk tea art, tea ceremony, scholars’ tea art, and royal tea art. Here you can enjoy a classic tea art show as well. Also, you have a chance to taste some of the refreshing and rare Chinese teas like the Shuangfei and Dahongpao.

This part is located in the Apricot Garden near the North Gate. The garden can create an amazing scene, especially in early spring when you can see the beautiful apricot blossoms. Here is a place to show the imperial examination system during the Tang Dynasty. Also, you can find the Shaolin Kungfu Show here, which makes it more interesting.

The poetry of the Tang is a treasured form of Chinese poetry. This place demonstrates this Tang poetic culture by classic Chinese garden landscapes, sculptures, lettering, and seals.

The section is great for your leisure time as water surrounds it from three sides. Here, you can learn about communications between ancient China with the rest of the world.

The park has two gates in the west and south. The West Gate is the main one in the park. Tang Paradise is located in Jiangxin District of Xi’an.

There is another amazing section in this area called children area dating back to the Tang Dynasty. Here, children can hear about their stories and have an enjoyable time. Do you have any more information to add? Feel free to leave your comments and thoughts. Also, if you have any questions about Tang Paradise, send it to us and our professional guides will reply as soon as possible.

3 Day from Marrakech to Marrakech Tour via Sahara