The second longest river in Europe exists in the Rhine George, and it has more water in comparison to any other river in the world. Therefore, many people worldwide spend many dollars to come and see this valley for its castles, rivers, cities, and nature.

The Rhine George is a strategic line for Europe as it has been part of it for thousands of years in which an essential part of Europe lies. This valley has been a path for connecting The North and the South of Europe, and it was later used as one of the excellent trading paths. In the tribute of this Rhine, it might be enough to say that the Rhine has been an inspiration for many writers and artists. This Rhine has been mentioned in many operas, poems, and songs.

The Rhine has been important for hundreds of years as it connects the North and South of Europe by passing through multiple countries. It helped people find their way, and it was also a path for traders. In this condition, small villages and cities came into existence so that there was a place where travelers could rest and use the facilities.

Eventually, the Rhine George became a path where one could find anything they needed as several castles were created and became a cultural exchange line. This importance made one part of the Rhine Valley, known as the Romantic Rhine Valley or Rhine George, claimed as a World Heritage Site in 2002.

The Rhine River in the middle of the Rhine George starts from the Alps in Swiss and is the border of Swiss with Liechtenstein, Austria, and Germany. The Rhine then passes Germany, and somewhere, it becomes the border of France and Germany. Eventually, it passes the Netherlands and then pours into the North sea.

Depending on the country it is passing from, it is called differently, including Rhein (in German), Rhin (in French), Rijn (in Dutch), and Rhenus (in Latin). The Rhine River in Germany is about 1230 Km, has a depth of 20-25 meters, and its width is about 150 meters.

Today we will talk about the part of the Rhine George located in Germany called the Middle Rhine Valley. It is between Bonn and Bingen and is near Mainz. It is one of the most visited places in Germany and attracts thousands of people around the world. Its castles, ruins, cruise tours, and dreamy scenes are enough reasons to come to this place.

The Middle Rhine is perhaps the most beautiful part of this fantastic valley. It is referred to as Rhine George, is about 65 Km from Koblenz to the Bingen am Rhein, and contains many beautiful castles and ruins. It is also filled with unique species of both animals and plants. There are few cities along the middle Rhine, and they are worth a visit, including Boppard, Lahnstein, Braubach, and Bacharach.

When you come to this romantic place, you cannot deny being impressed by the scenes. So many romantic scenes with a natural background are waiting for you, and you cannot miss them. These scenes can be found almost everywhere in the middle Rhine, from castles to cliffs.

One of the amazing and interesting things you can do while you are in the Rhine George is that you can spend some days on cruises to both enjoy the length of the river and the scenes. There are perfect scenes and opportunities for photography, and you can have parties on the cruise which mostly starts in March and continues to December. However, this season is not a good option since it is so crowded. 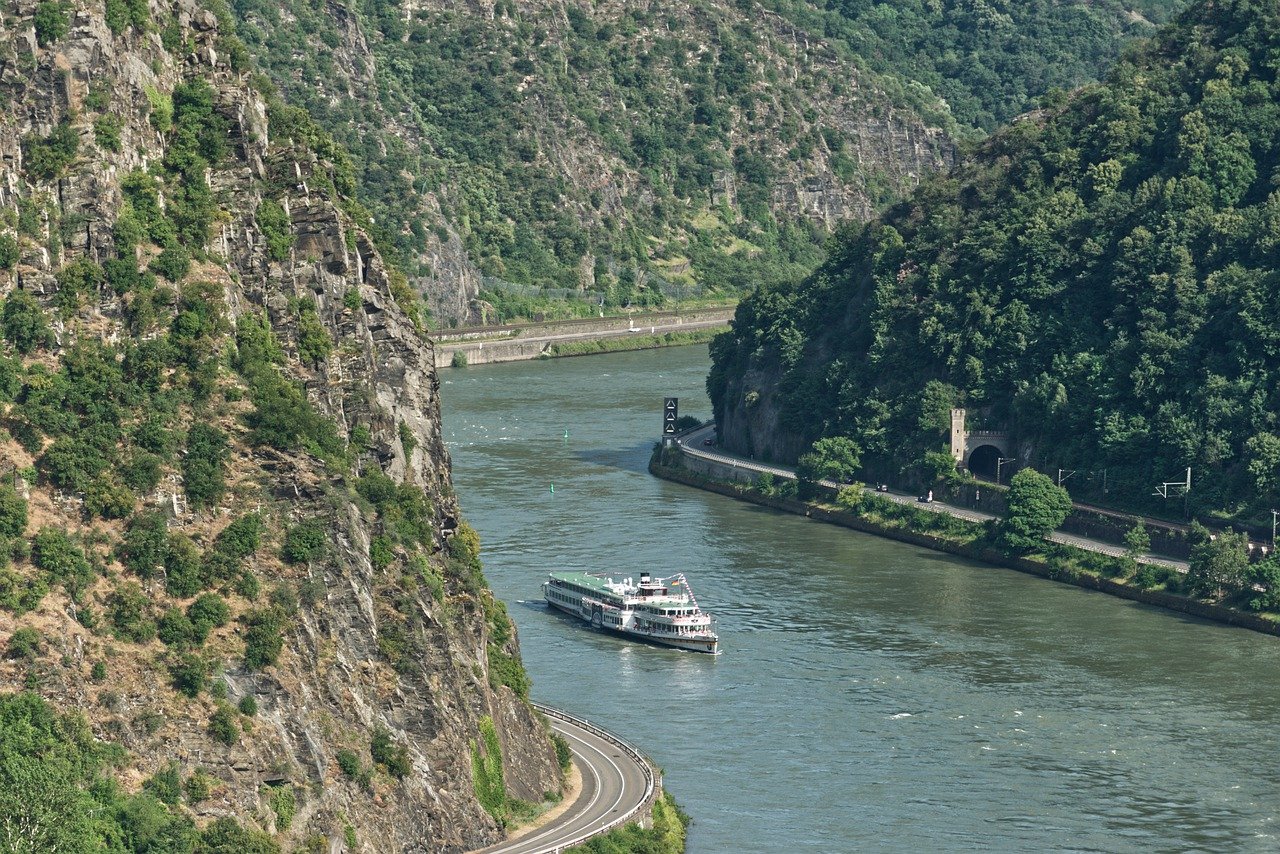 Trains Along the River

One of the great and amazing things that you can do in the middle Rhine George is having a general look at the Rhine by moving along it. There are two ways to do that, which are by train or by boat. Two trains go all over the middle Rhine and have multiple stations along the way. One of the Train rails is on the left side (Linke Rheinstrecke), and the other train is on the right side (Rechte Rheinstrecke). The left train goes from Cologne to Mainz, while the Right train Goes from Cologne to Wiesbaden. The left one is mainly considered as the train for watching nature. 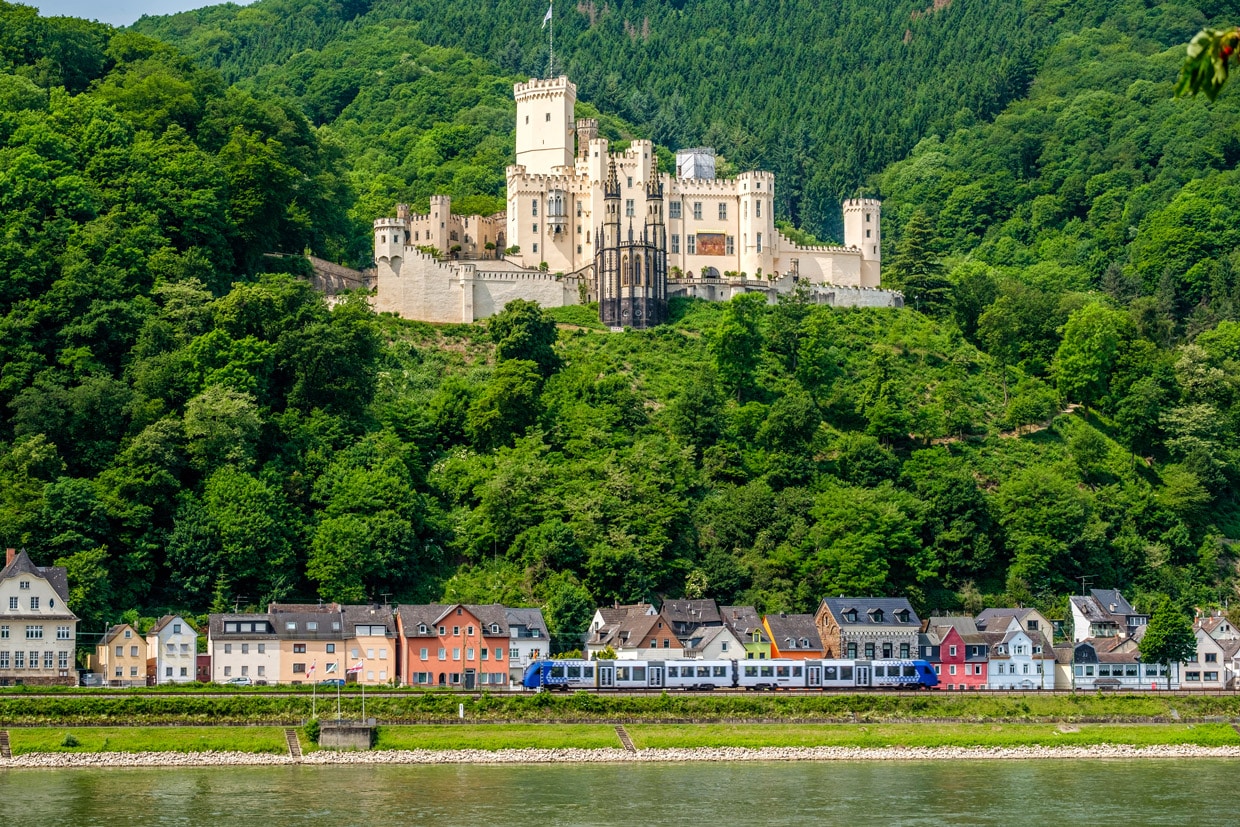 There are about 40 Castles in the Rhine, and some have been restored and turned into hotels, bars, or restaurants. Please give them a visit and enjoy the art and architecture of the castle building. You can rest in the night after spending a long day having fun in the Rhine and enjoy the beautiful scenes while relaxing.

Some Hotel Castles are:

Ignoring some of the oldest castles in Europe might not be an excellent idea. However, many of them might be just ruins, but they are still very attractive for archaeology lovers. Some of the most stunning castles in the Rhine include: 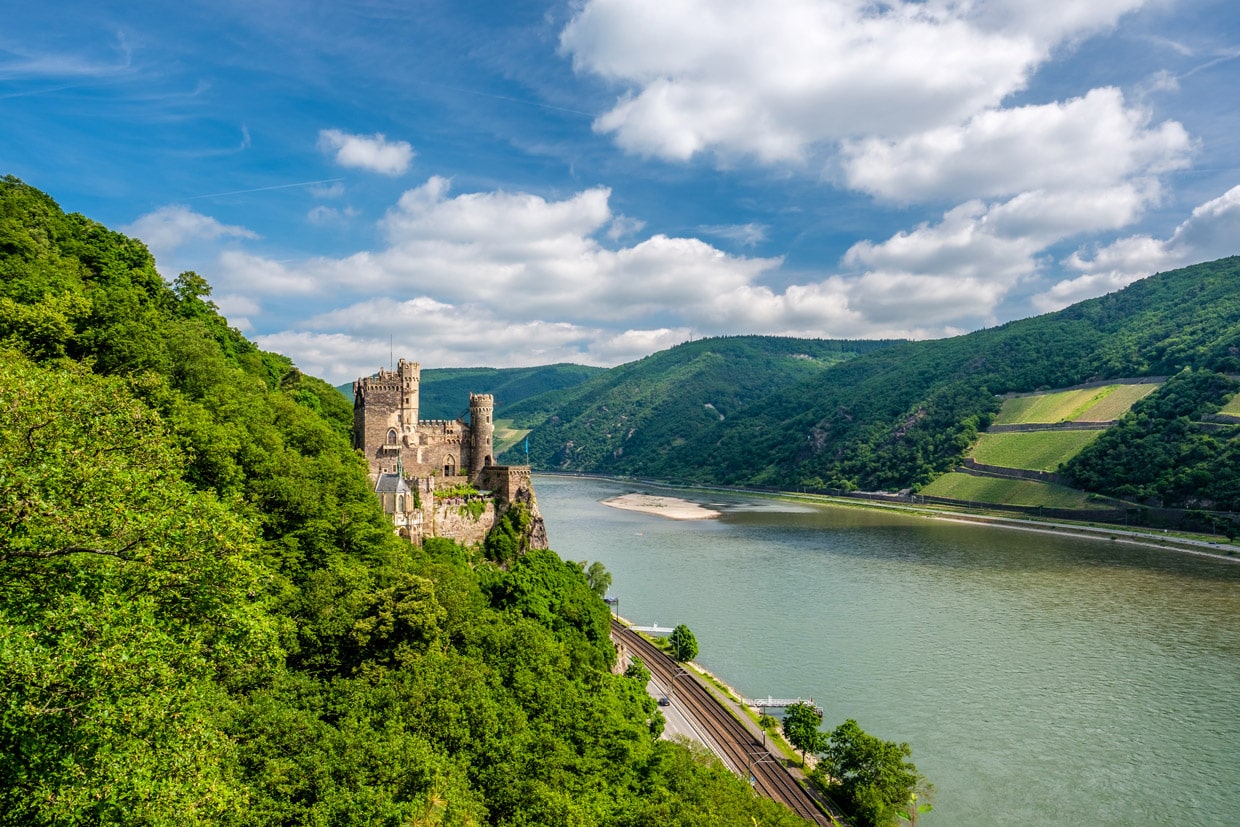 It is a good idea to stop on the way to the Rhine and enjoy the beautiful city. Mainz offers many ancient and modern places for every type of person. Also, do not forget to visit numerous museums in the city and learn a little about German history. 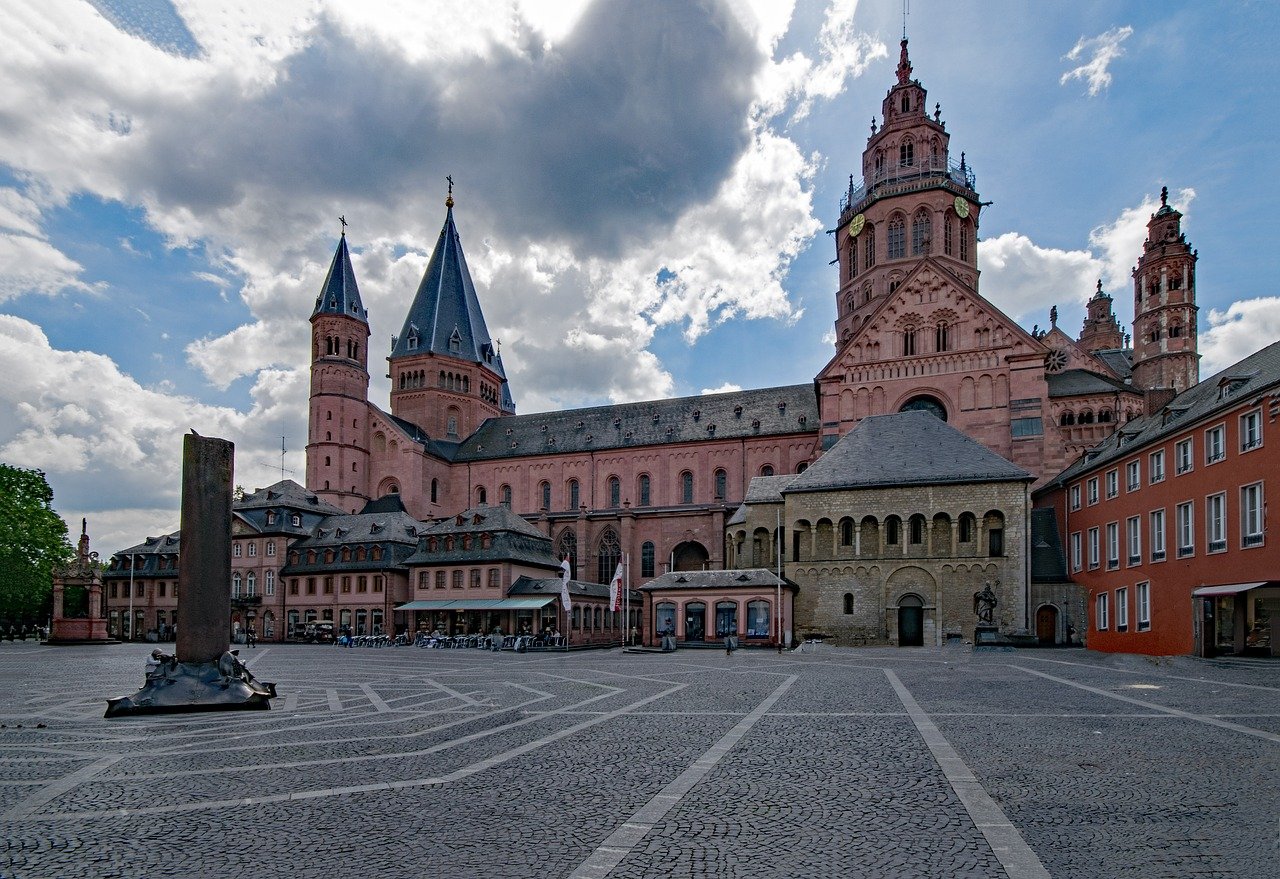 This cathedral city on the west side of the Rhine is one of the oldest towns in Germany. You should not miss Don St. Peter if you are in the town as its Romanesque style is unique. There are other places to visit in town as well. 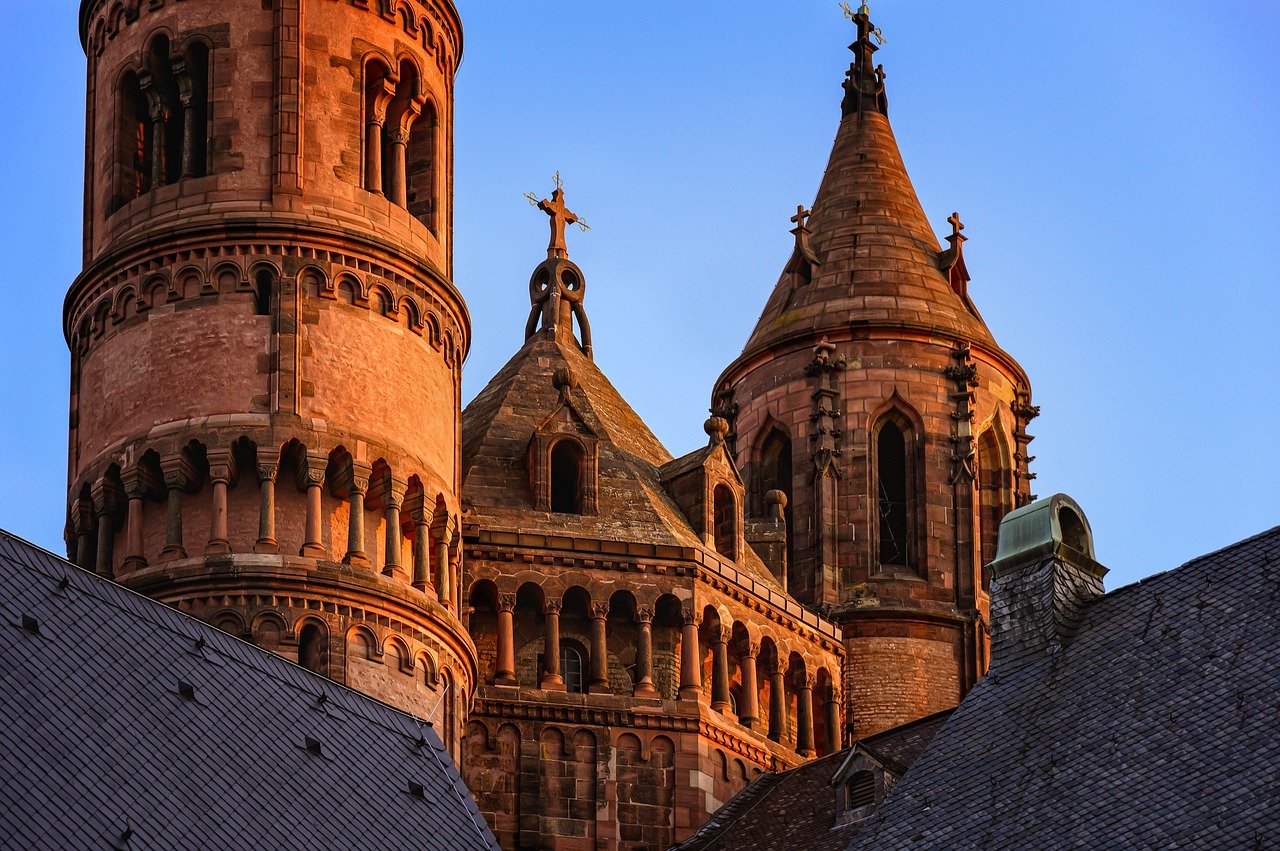 One of the old cities that was used for the protection of the Rhine. Due to this reason many old gates and towers can be found in the city. Burg Lahneck castle is one of the good places we encourage you to visit. However, it might be a little challenging due to the walk. 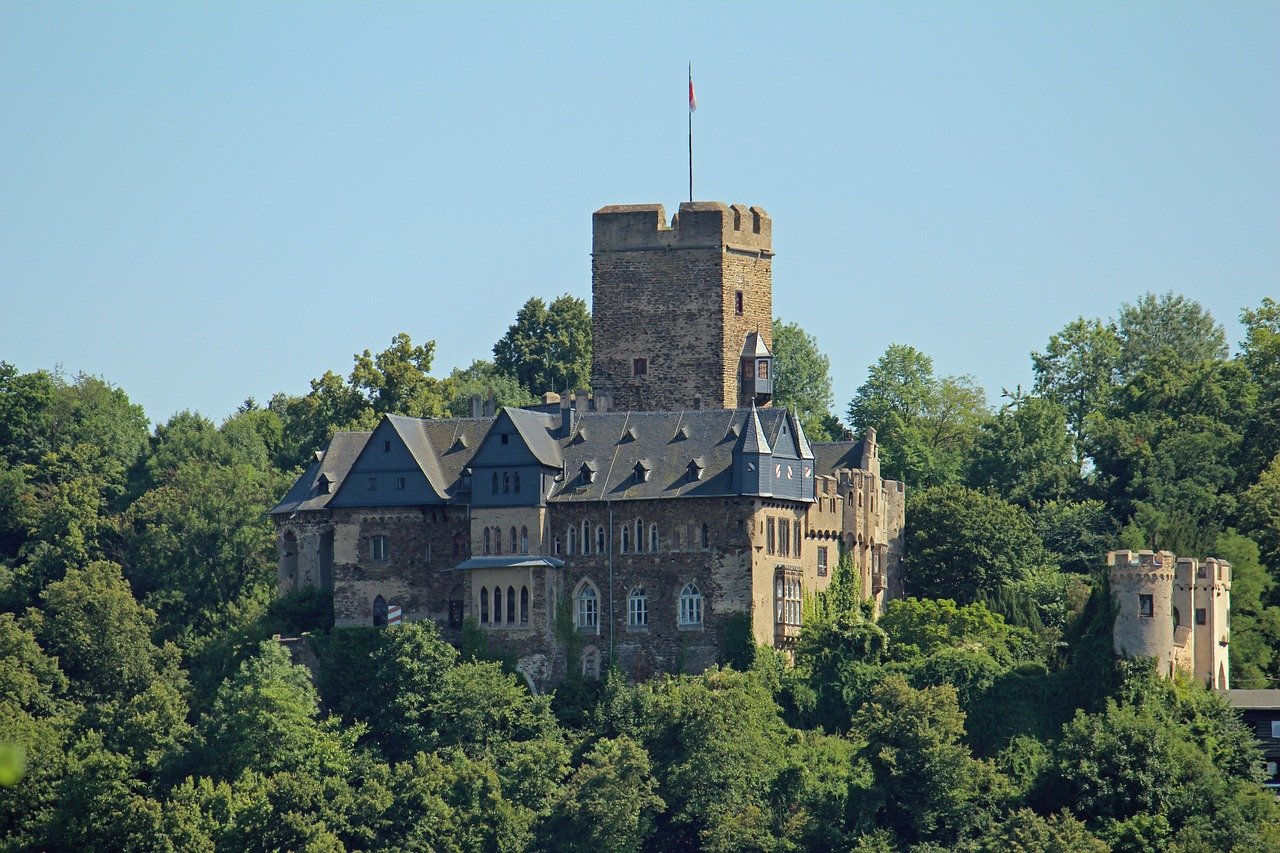 It is located at the heart of the Palatinate forest and has been part of the Rhine for hundreds of years. Many things can be done in the Boppard, including looking at Roman buildings, castles, walking on beautiful farms, etc. however, you should not miss St. Severus Church.

You can also visit many other cities and enjoy spending time in them, including Braubach, Bacharach, and Wiesbaden. 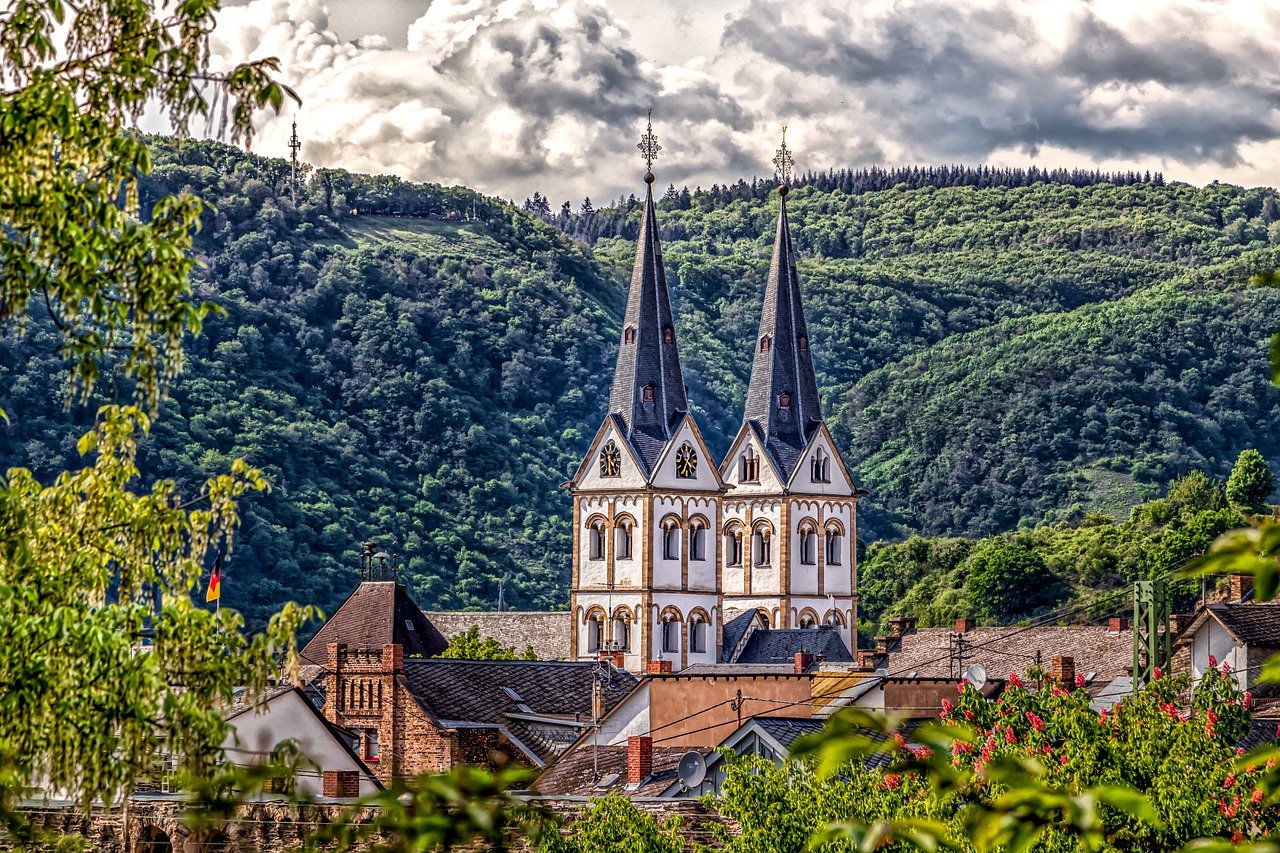 The reason for coming to this place must be nature. Anything else in this place that might feel good is because of this nature. The nature of the Rhine George has affected almost everything, and this nature can be seen in everything, including Cruise tours, Forests, and castles. Loreley Rock is a place you can enjoy a lot. It’s A cliff located at the edge of the Rhine river and is part of the UNESCO World Heritage Site.

Located on the left edge of the Rhine, the Palatinate forest covers about 1700 km of the area, and it is one of the biggest forests in Germany. Some castles and some cities such as Kaiserslautern are in this forest, and it is part of a nature park. Biking, hiking, and zip lining in this forest is a very good idea and can be very entertaining. On your way in the woods, you may face the ruins of Waschtenburg and Schloss Wachenheim castles. 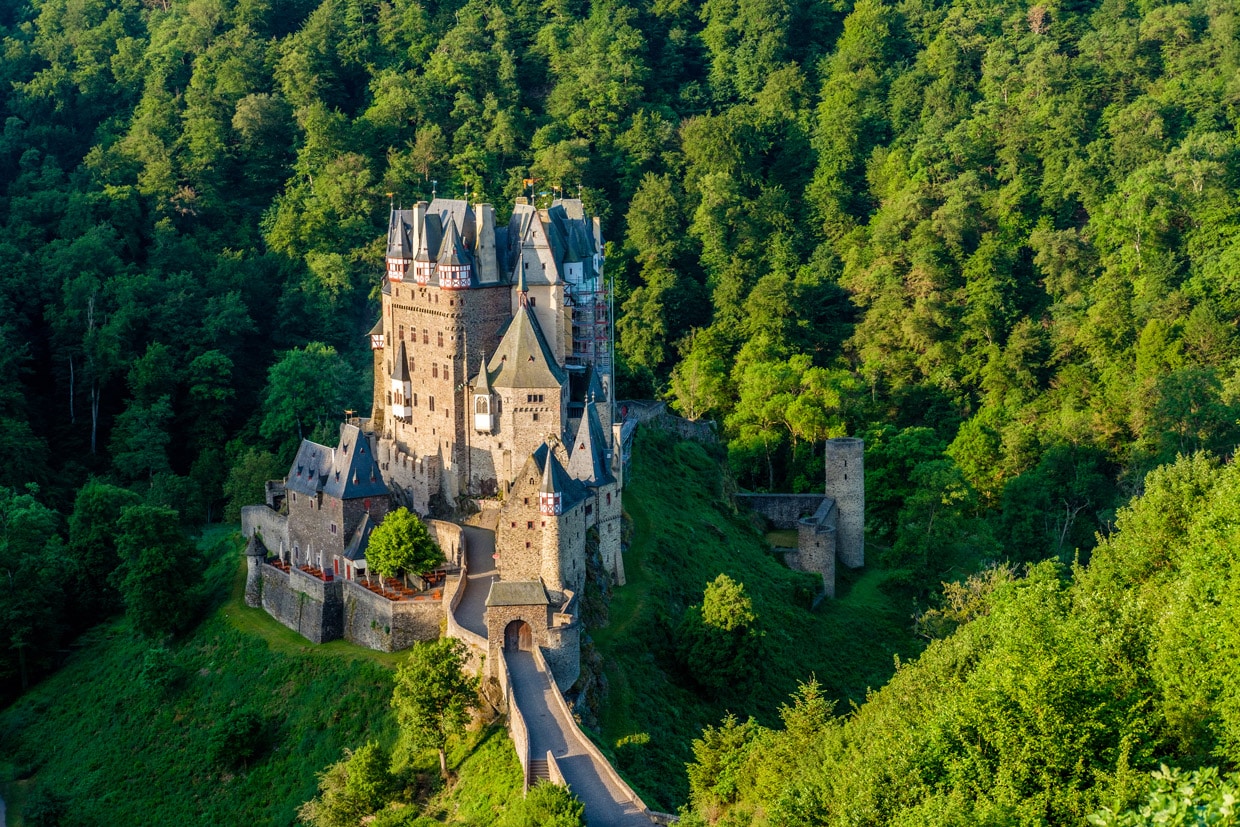 The middle Rhine can be accessed by almost anything. Whether you walk (not recommended due to the length), use a bicycle, car, train, or boat, you can enjoy all the way to the destination. We truly recommend that you enjoy the way rather than waiting for the destination. However, some services are not available all year, including the cruises that do not enter the Rhine in Winter.

The best season for going to the middle of the Rhine would be in the summer. At this time of year, everything is green, and cruises are busy. In September, many businesses start closing for winter, and cruises finish their sail in November. Everything starts again in April. 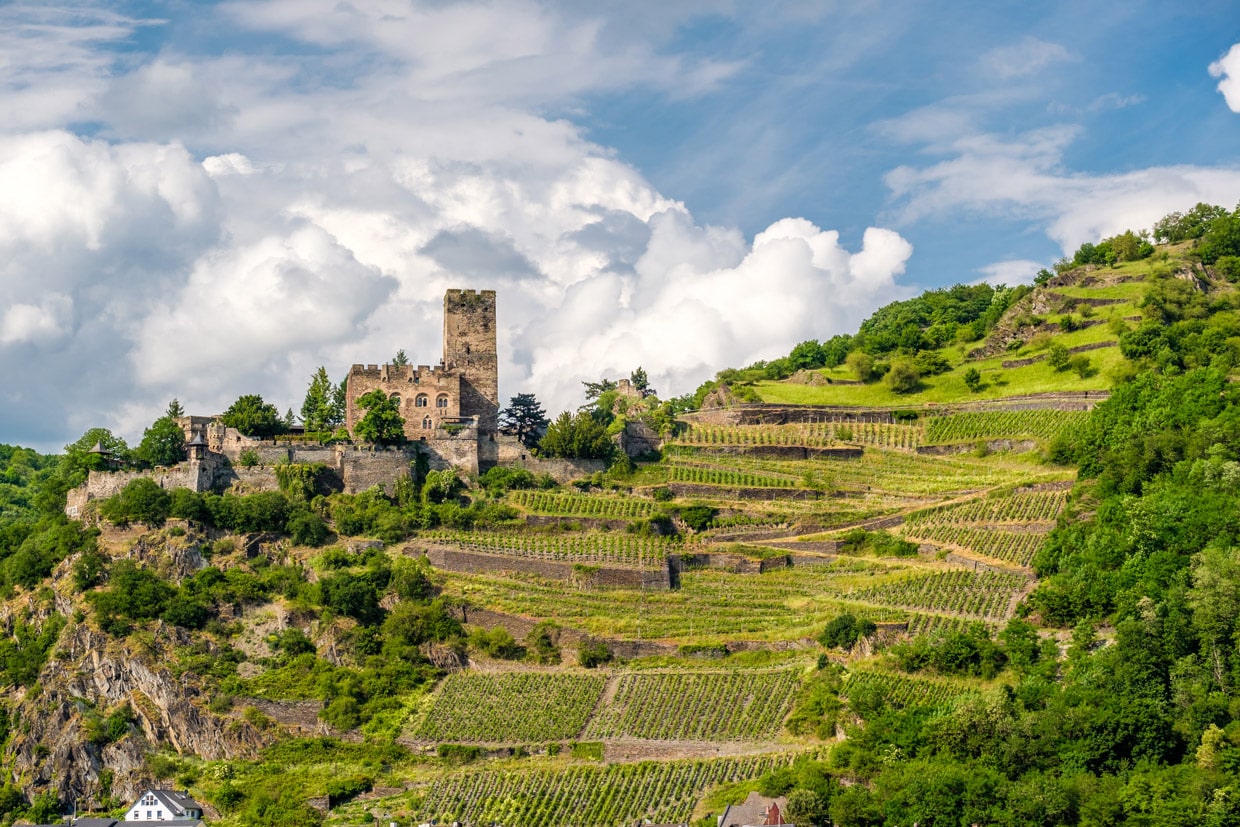 Multiple animals are swimming in the river, and also many others can be found above the surface, which is the amazing part of this nature and its beauty. Having these animals in this nature and seeing them and sometimes maybe interacting with them is a fantastic thing in our world. Especially nowadays that not many animals are included in our lives, and most of them are dying and extinct because of our progression, especially technology progression. So, I truly encourage you when you go to this place to be careful and pay attention to nature’s life and the lives of the animals. It is not easy for the mother of nature to create these great and wonderful scenes every day and give life to her creatures.

Cruise in the Heart of the Amazon Rainforest