Quedlinburg is one of the most wonderful cities in Germany, located in the northern Harz Mountains in northern Germany and a famous destination for those who want to find the pure spirit of Germany in its cities. A big part of the importance of Quedlinburg Old Town is because it has been a UNESCO World Heritage Site since 1994. The people of this city speak German, and its population is about 25,000.

Quedlinburg is one of the most wonderful cities in Germany, located in the northern Harz Mountains in northern Germany and a famous destination for those who want to find the pure spirit of Germany in its cities. A big part of the importance of Quedlinburg Old Town is because it has been a UNESCO World Heritage Site since 1994. The people of this city speak German, and its population is about 25,000.

To the east of the city is the Bode River. The crossing of this river near the city has affected the city’s environment and made it green and fresh. Quedlinburg covers an area of ​​approximately 120 square kilometers. Travelers who have been to Quedlinburg reviewed their journey as an unforgettable stay in an old town with everlasting memories of warmhearted people.

Historians ascribe the founding of Quedlinburg to the ninth century. During this time, Heinrich der Vogler came to power, and in this city, in 919, the crown of Germany was bestowed upon him.

Among its most popular attractions, you can see the Quedlinburg castle complex founded by King Henry I.

Quedlinburg was one of the few cities not destroyed in World War II and was not particularly damaged. Because of the fact that the city was not touched by the war, we can see a lot of historical remains in it today. Unfortunately, a huge part of German history is gone due to wars and sad events like that.

There is a lot of historical significance in knowing that this was one of the first cities in the world to pursue women’s rights seriously, and it was ruled by women for about a century. Such an environment should not be too far from being supportive of women growing and reaching high degrees of scientific and political power. Quedlinburg accounted for the birth of Germany’s first female physician. In 1754, Dorothy Erxleben obtained a medical degree from a German university. 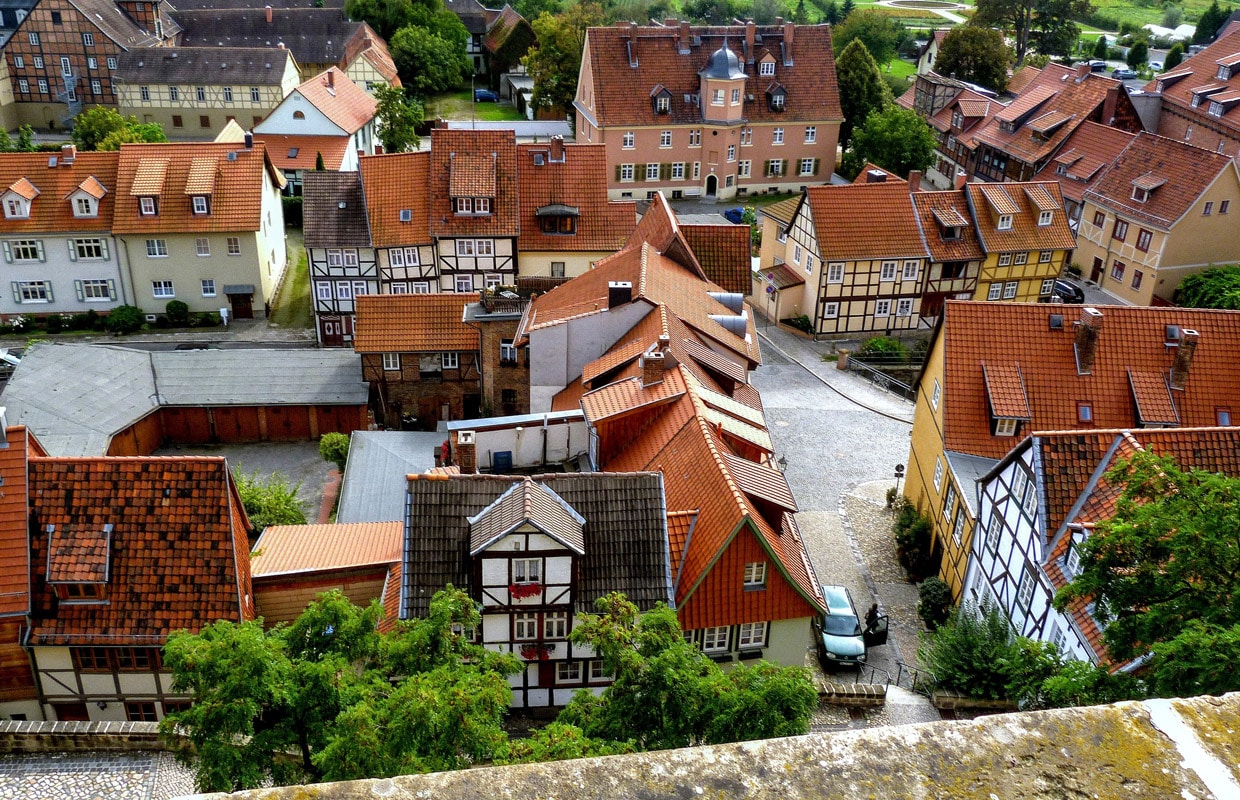 The very interesting architecture of old townhouses is certainly the first thing you’ll notice when you visit it. According to UNESCO, the Old Town of Quedlinburg “is a wonderful example of a medieval city in Europe,” making it one of the reasons UNESCO selected Quedlinburg as a World Heritage Site.

It feels like you are hundreds of years back in time when you walk in this city because some of the houses here date back more than 800 years. History buffs should visit this place to learn more about history. The old town is just like the old medieval town movie scene. From every angle, the routes and structures of this city are a sight to behold since they were founded in 1330, and the style of urban design differs a lot.

Schloss Quedlinburg is the strongest structure and symbol of the city, built on the rocky cliffs of the city. From inside this castle, almost the whole city is visible. In the past, this castle was used for military and defense purposes.

Several interesting collections are on display in the palace. For example, the most famous collections of this palace are the Ice Age fossils and the collection of torture tools that were used in the Middle Ages. Also, we should not forget the collection of Bronze Age works, which are very appealing.

Church of St. Servatius is the most beautiful church in the city, built with beautiful Gothic and Baroque architecture. This church is one of the most prominent Roman buildings in Germany. The inside of the church is decorated with stained glass and exquisite sculptures, which has made it a very good place to keep the church treasures of the country.

The church treasure, also known as the Quedlinburg Treasure, is a stunning collection of decorative combs adorned with ivory and expensive jewelry, gold boxes, etc. These jewels belong to different historical periods and are estimated to be more than ten centuries old.

If you are planning to visit Schloss Quedlinburg and the Church of St. Servatius, you should go to Schloßberg 1, 06484 Quedlinburg, Germany.

Fachwerkmuseum im Ständerbau is one of the old wooden houses in the city, which was built in 1310. Today, the house is known as a museum and depicts the developments of the city. Also, by visiting this museum, you can get good information about how the buildings in this city were built.

The Markt is the most well-known square in the city, which is surrounded by old buildings from different historical periods, especially the Renaissance. If you start walking in this square and then go to the north, you can see beautiful wooden houses that are located next to each other on Breite Strasse.

Around The Markt are the city’s oldest and largest hotels, which once housed the wealthy and business people who came to the city.

It is interesting to know that the oldest German house is located in the city of Quedlinburg, and it is more than 1000 years old. Today, the house is a museum with a history of its construction and other related information. If you are curious to see this house, you can go to Wordgasse 3 every day except Mondays and Tuesdays.

The Schlossmuseum is the most famous and largest museum in the city, which shows the history of Quedlinburg in different historical periods such as ancient Rome, the Middle Ages, etc. Also, the art gallery in this museum is very interesting for fans of German art.

After visiting the museum’s historical monuments, you can walk in the surrounding area and enjoy its beauty or even take photos; this place is one of the most popular places to take artistic and interesting photos.

Rathaus is the old town hall, built in the Gothic style in the 13th and 14th centuries. The combination of the old architecture of this building and the ivy wrapped around it has made it very beautiful and majestic. Another part of the building that adds to its beauty is the Roland statue of a knight, which refers to the fortifications and power of the city.

To see the works of this artist, you can visit Schloßberg 11, 06484 Quedlinburg, Germany.

Other Attractions in Quedlinburg Include: 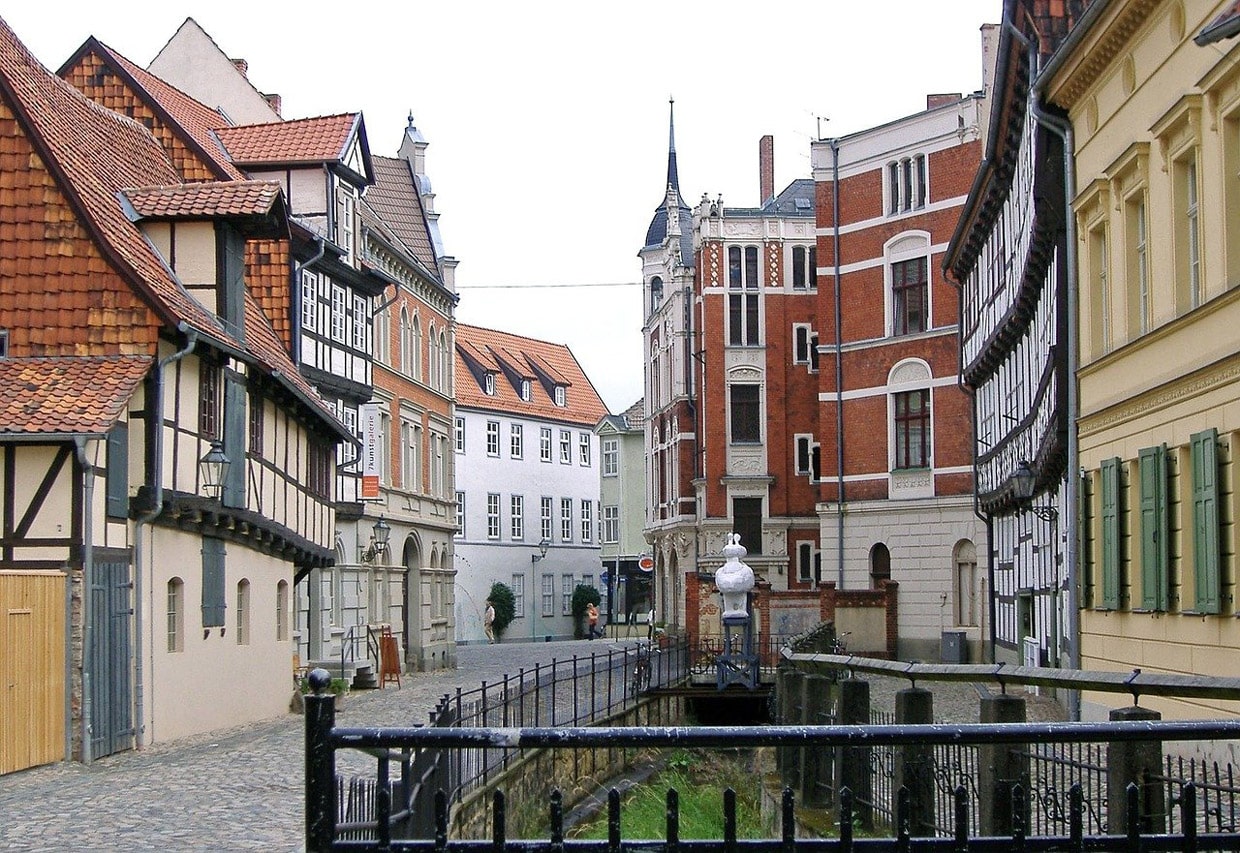 There are good restaurants in Quedlinburg that offer local German cuisine with the highest quality. But in addition to the restaurants, we will mention below. You can also eat in the hotels in the next part.

The local and home-cooked food served at these restaurants in Blasiistrasse 14 will fascinate you with its unique taste.

If you want to enjoy a cup of coffee after sightseeing, Boulevard Cafe is definitely the place to be. You can find this cafe in Old Town Square, the Markt.

Transportation in the City of Quedlinburg

City buses are often connected to the surrounding towns and villages, which makes them very efficient and useful. Some city buses even go to Berlin.

Harzer Schmalspurbahnen is the city’s famous railway station that connects the various cities around Quedlinburg. Another reason for the station’s popularity is that it can take passengers by steam train to the heights of Mount Harz. The view that awaits you at the top of the mountain is very spectacular and attractive and will certainly be the turning point of your trip.

The nearest airport is Leipzig / Halle Airport, approximately 90 km southeast of Quedlinburg. The airport covers only a few airlines. Another airport that is further away from the city but is larger and more advanced is Hannover Airport, located 120 km northwest of the city.

How to Get to Quedlinburg?

As you read, Quedlinburg is located in the north of Germany. To get to this city, you can use different land and air routes. As usual, the easiest and fastest way to get to this city is by plane. However, if you are in Berlin or Hanover, you can easily reach Quedlinburg by train in a 3 to 4-hour journey. 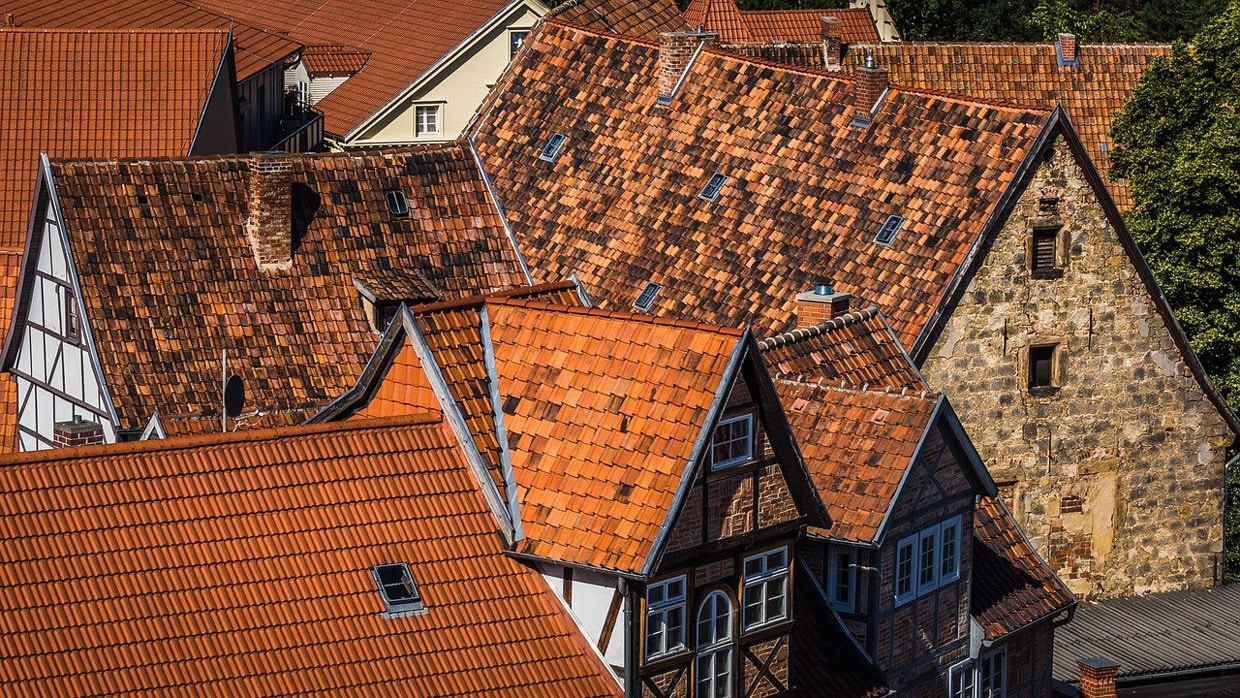 Accommodation is one of the most important things for you if you intend to visit the city of Quedlinburg. Here are some of the famous hotels in the city that offer better services and their cost is a bit high:

The following hotels are less expensive and more economical:

Every year on Easter, the city of Quedlinburg becomes a truly historic city. In this festival, people all wear medieval clothes and parade to celebrate Easter.

The city music festival, which is held every year from June to September, is one of the best celebrations for music fans, in which different genres of music such as rock, classical, etc., are performed. 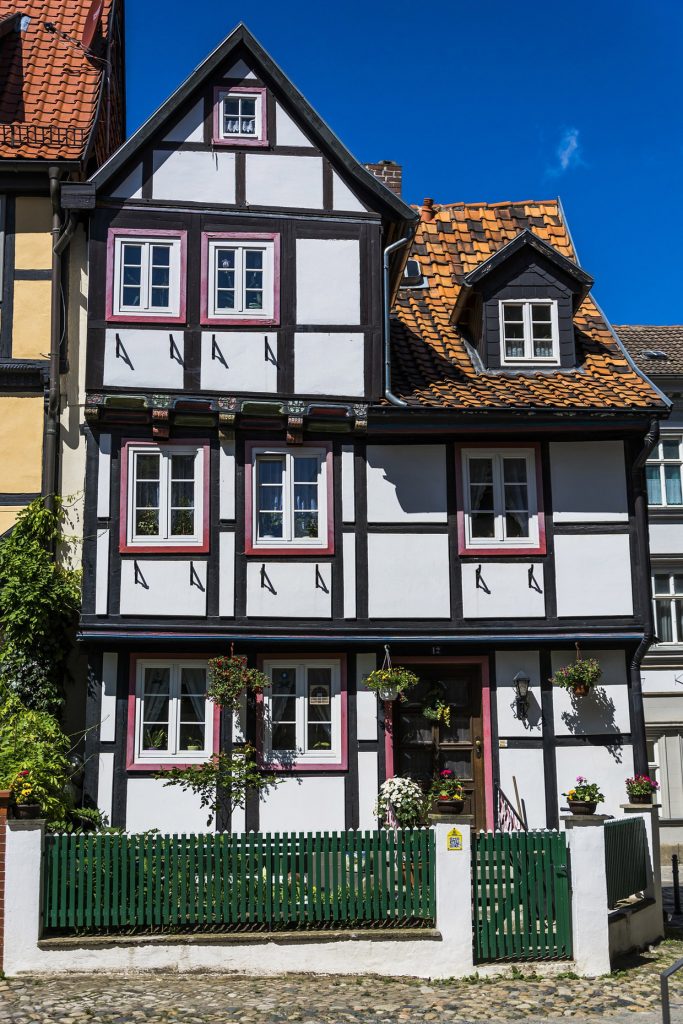 Quedlinburg has a temperate and oceanic climate, making it accessible in most seasons. However, the best time to visit Quedlinburg is in the summer, when the temperature is at its best. The average temperature in summer is about 21 ° C.

The warmest month of the year in this city is August, with an average temperature of 23 ° C or 73 ° F.

It can be said that Quedlinburg has relatively good rainfall. On average, rain can be expected in all months of the year, but the rainiest month of the year is July, and the opposite is March, which is the driest month of the year. If you are not a fan of rain, you should be careful not to schedule your trip in July. For people who love the sun and walking under the blue sky in the open air, it is better to choose the month of June for their trip. Because most days of this month the weather is sunny.

Usually, in the winters of this city, the probability of snowfall is high. The reason is the cold air currents that blow from the Scandinavian side of the city. These cold air currents lower the air temperature to 0.5 ° C in January.

Tangier to Marrakech via Atlas Mountains