Phewa Lake is the largest lake in Nepal after the Rara lake compared to Nepal’s water bodies. This lake is top-rated among locals and tourists. The city is economically dependent on the lake, as it is used for fishing, generating electricity, and tourism. Phewa lake covers an area of about 4 km2 and has an average depth of about 8 m.

Phewa Lake, also called Phewa Tal (in the Nepali language it is written in this way: फेवा ताल), is a freshwater lake in Nepal situated in the southern side of the Pokhara Valley, including Pokhara city, as well as some parts of Sarangkot and Kaskikot. The lake is river-fed, but a barrier balances the water flow; therefore, the lake is categorized as a semi-natural one.

The astonishing Himalayas is about 28 km far from the lake. The lake is also admired for the reflection of these epic mountains and peaks of the Annapurna and Dhaulagiri on its mirroring surface. At the heart of the lake lies a small island that The Tal Barahi Temple is built on.

Legends say that a goddess dressed herself up as a beggar and started wandering around the Himalayan Valley, but the people of the valley derided her. This point resulted in the flood that happened as revenge. The flood destroyed valleys and villages and drowned those who misbehaved her. This divine punishment formed Lake Phewa, one of Nepal’s largest lakes.

An examination of lake dregs declares its formation date to be during circa 13000 BC, while the nearby Pokhara city was formed later in the medieval era. As the region was on the old trading route between China and India, locals used to see foreigners wandering around since early times. But with the growth of tourism, modern amenities increased in the area, causing Pokhara to lose its small-town allure.

You can enjoy activities like paragliding, water sports, and usual yoga, Reiki, and massages on the lakeside road, but it is not the genuine aspect of the region. If you attempt to think out of the box of tourist areas, you will discover mind-blowing scenery and welcoming people to have memorable experiences. Remember to be respectful toward viewpoints and lifestyles different from yours and try embracing them.

The region has a subtropical and sultry climate; however, the snowy heights of the Himalayas also affect the weather. Although summers are not too hot and winters too cold, it is mostly recommended to schedule your trip for spring or fall, especially October, for enjoying mild weather. Anyway, you might like taking your personal preferences and avoiding tourist peaks into consideration.

While you can get to Pokhara by bus both from Kathmandu, the border town of Sunauli, and Butwal, you can only take a flight there from Kathmandu. The road offers amusing views of peaks and rural Nepalese lifestyle worth overcoming a few difficulties in the ride. But it is safer to travel by plane during the rainy season due to slippery roads. Getting to the region by plane offers the advantage of a bird’s eye view of the whole area, especially the panoramic mountains of Himalaya.

Getting to the Phewa Lake

There are various ways to get to Phewa Lake from Pokhara. If you want to refresh your lungs with fresh air, you might like the idea of walking there or riding a rental bicycle, motorcycle, or scooter. You can also utilize buses and taxis to get to the lake. Buses are economical and therefore usually crowded, while taxis offer more private and comfortable space. 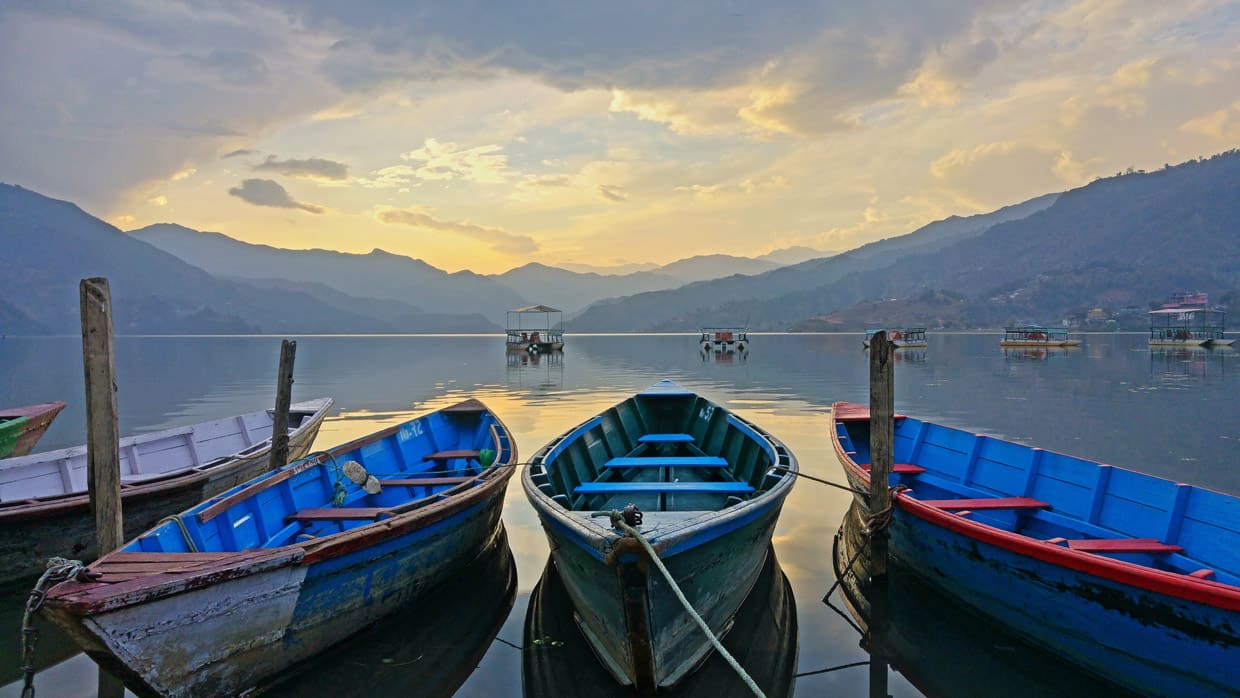 You might start your exploration in Baidam, located on the eastern banks of Phewa lake, mostly known as lakeside. There are apparently numerous strips of hotels, guesthouses, restaurants, and souvenir shops on this road.

You can wander around this road visiting restaurants, cafes, and bars or taking a rest booking a room in a hotel or a hostel if you are not planning to camp. Live music and music festivals are popular around. Merchants offer handmade items like Jewels and trinkets as souvenirs of the area.

You can also find centers around providing paraglides and boats. There are also some modern spas for yoga, massage, meditation, and Reiki, providing over a dozen various retreats. Some also arrange 1-20 day treks, including hiking as well as courses in yoga and meditation.

Lakeside can lead you to start exploring the shores of Phewa lake on foot or by riding a bicycle. In contrast to the garish tourism growth of lakeside, the precipitous southwestern lakeside is covered with a velvety forest and alive with the birds singing.

The vigorous Rani Ban, or Queen’s Forest, puts an emerald shade on the lake combined with the reflection of snow-white peaks of Annapurna mountains on its mirror surface on clear days.

You can boat on the lake with one of the Doongas (boats) painted in vivid colors that are available for rent at the lakeside. The lake seems enchanting in the sunrises and sunsets when you are swinging in the boat. The glassy water of the lake makes it possible to observe the life of fabulous fish. You can boat toward the southeast side of the lake, where Tal Barahi Temple is located on a small island.

Tal Barahi Temple, also known as the Lake Temple, is located at the center of Phewa Lake. This temple is one of the most important religious monuments of Nepal for Hindus. This two-storied pagoda was dedicated to Vishnu, a Hindu god.

As a devotee of Goddess Durga and the first Shah king of Kaski, King Kulmandhan Shah built the temple on the island at the heart of Lake Phewa. Prayers usually visit this temple on Saturdays. 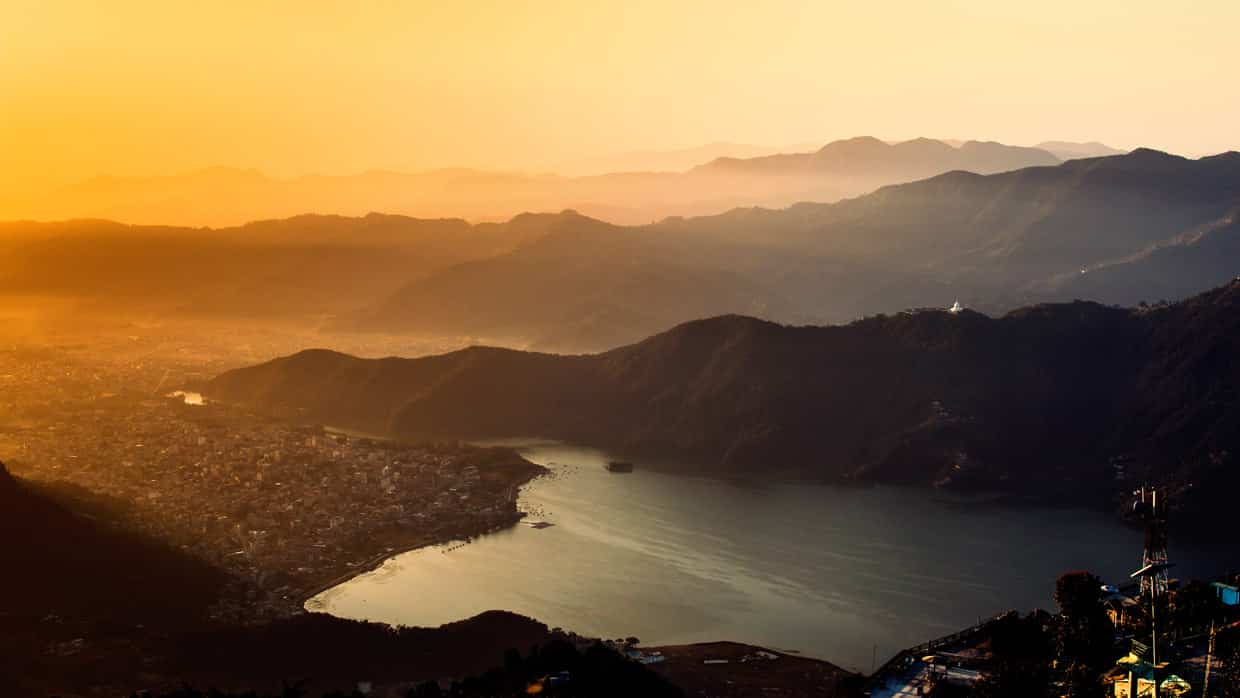 The glory of this astonishing area is more perceptible in the heights. There are some viewpoints from which you can find pleasure in its sublime perspectives. You can access these viewpoints by hiking, cycling, or driving there. World Peace Pagoda (Shanti Stupa) and Sarangkot are popular viewpoints to look at the scenery above.

These attractions include restaurants, hotels, and cafes. Nearby hills also represent breathtaking perspectives. Kahun Dharahara and Dhiki Danda are among these kinds of hills in the area. While you can also access Kahun Dharahara by bus, car, and motorbike, Dhiki Danda is only accessible via hiking.

Begnas Lake (Begnas Tal) is tranquil, refreshing, and peaceful. There are hostels nearby, and a very nice Vipassana Meditation Retreat provides some services for your relaxation. The road leading to Begnas Tal is a fascinating road to walk along and regard the country’s seasonal rhythms of life routine.

Rupa Lake (Rupa Tal), being more remote to Pokhara, has limited ease of access; it is more calm and untouched in comparison to the other lakes around. A must-visit if you are enthusiastic about wilderness. Dipang Lake (Dipang Tal) is also an eye-catching lake where wild lotuses and wild swans lie on the water surface. Devi’s Falls (Patale Chhango) is striking, mainly after heavy rains. Devi’s Falls dive into a cave disappearing into the earth.

There are some explorable caves around the area where you can schedule to visit. Mahendra Cave (Mahendra Gufa) and Chamare Cave (Chamare Gufa) which are near each other, are well known among people, as the first one is made of unique limestone and the second one is a special opportunity to observe cave bats. There is a statue of the goddess Shiva in Mahendra Cave, while a large stalagmite in the Gupteshwor Mahadev Cave is worshiped as a Shiva representation. This cave is close to Devi’s fall we talked about earlier. You can plan to visit them both in a day.