In the southwestern of Turkey, in Denizli province, and the valley of Menderes river, you can visit one of the world's most attractive natural sites, Pamukkale. It is located in the Aegean region of Turkey, and during the year, it has a moderate Mediterranean climate.
In This Article
How It Is Created?
What to See in Pamukkale?
How to Get Pamukkale?

Pamukkale, translated as the cotton castle, is a lovely natural site in Turkey. If you take a look at its pictures or from the distance, you will think that these cliffs are made of cotton, or you may say that the snow covers them. The white, shiny travertine stones have made this awesome scenery. Each year lots of tourists from all over the world come to turkey to visit Pamukkale.

How It Is Created?

Pamukkale’s hot springs are famous and used from the 2nd century BC. After that, mineral water starts its path from natural hot springs of the region; during its slow flow, the Carbonate Calcium in the water deposits as a soft gel and then becomes the hard porous travertine sedimentary rocks that formed terraces and pools of warm to hot water. 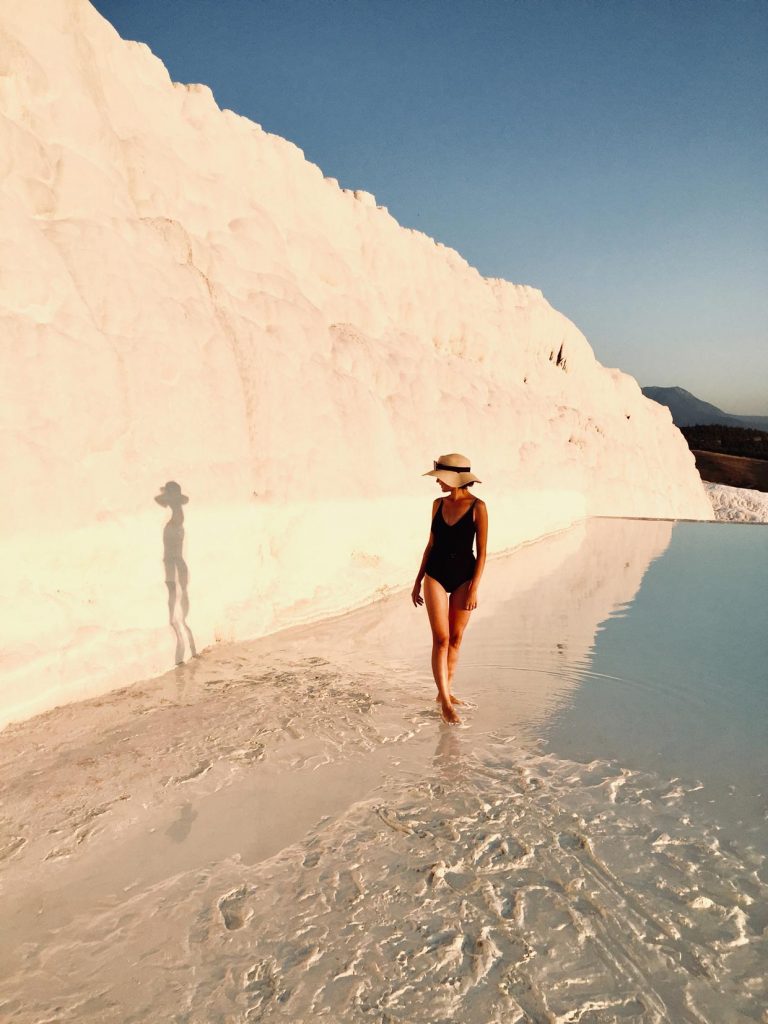 What to See in Pamukkale?

Being in Pamukkale would be an unforgettable experience for those who love to interact with nature. If you love staring at the glory and beauty of natural places, Pammukale is your favorite destination. However, that’s not all! Take your time seeing every part of Pamukkale to enjoy this part of the land entirely. Here we will name some of the places to visit in Pamukkale.

There are 17 hot springs on this site. The temperature of the water differs from 35 to 100 °C. The water flow shapes the cliffs and the natural pools, which are suitable for watering and swimming. After visiting the terraces, you can go to Cleopatra’s Ancient Pool and enjoy the pool with the ancient ruins and columns as well as restaurants, cafes, and other facilities around it.

On the top of these cliffs, you can visit the Ruins of famous ancient Hierapolis. Hierapolis means the holy city. It is said that in the 7th century BC, the Phrygians built a temple that then became the center of Hierapolis. In the 2nd century BC, Hierapolis was founded and used as a thermal spa. About 2000 Jewish families were sent by Antiochus the Great to the region, and Hierapolis became a city for a great number of Jewish.

From that time, doctors were sending patients to the thermal spa of Pamukkale for treatment. In 133 BC, Hierapolis became part of the Asian province of Rome. During the kingdom of emperor Tiberius, a big earthquake destroyed the city, and unfortunately, the baths of Romans were destroyed.

In the middle of the 20th century, several hotels were built on the ruins of Hierapolis and a bridge on the cliffs of Pamukkale, causing many damages. But when Hierapolis and Pamukkale were called a world heritage site by UNESCO, the hotels were eradicated, and the bridge was ruined. Now you should take off your shoes to walk on the terraces of Pamukkale to avoid damaging the travertine cliffs. Some parts of the terraces are hot, and some are cold. The entrance fee for Pamukkale is 80 TL. Also, the working hours are from 6:30 to 23 in the summer and 10 to 16 in the winter.

This small and fantastic museum is located in one of the ancient Roman houses of Hierapolis. There are some old stone sculptures and artifacts from the ancient Hierapolis, Laodicea, Coleus, Tripoli, Attuda, and other cities in the Lycus Valley in this museum. From 1984, the structure became the museum. The pool is open just in the summer, and the entrance fee is 50 TL. The time to swim is 8 to 21 per day.

You can have a balloon and fly on the top of Pamukkale and Hierapolis and take amazing photos. The best time to have balloons is the time of sunset, the most beautiful time of Pamukkale. The fee is 80 TL. 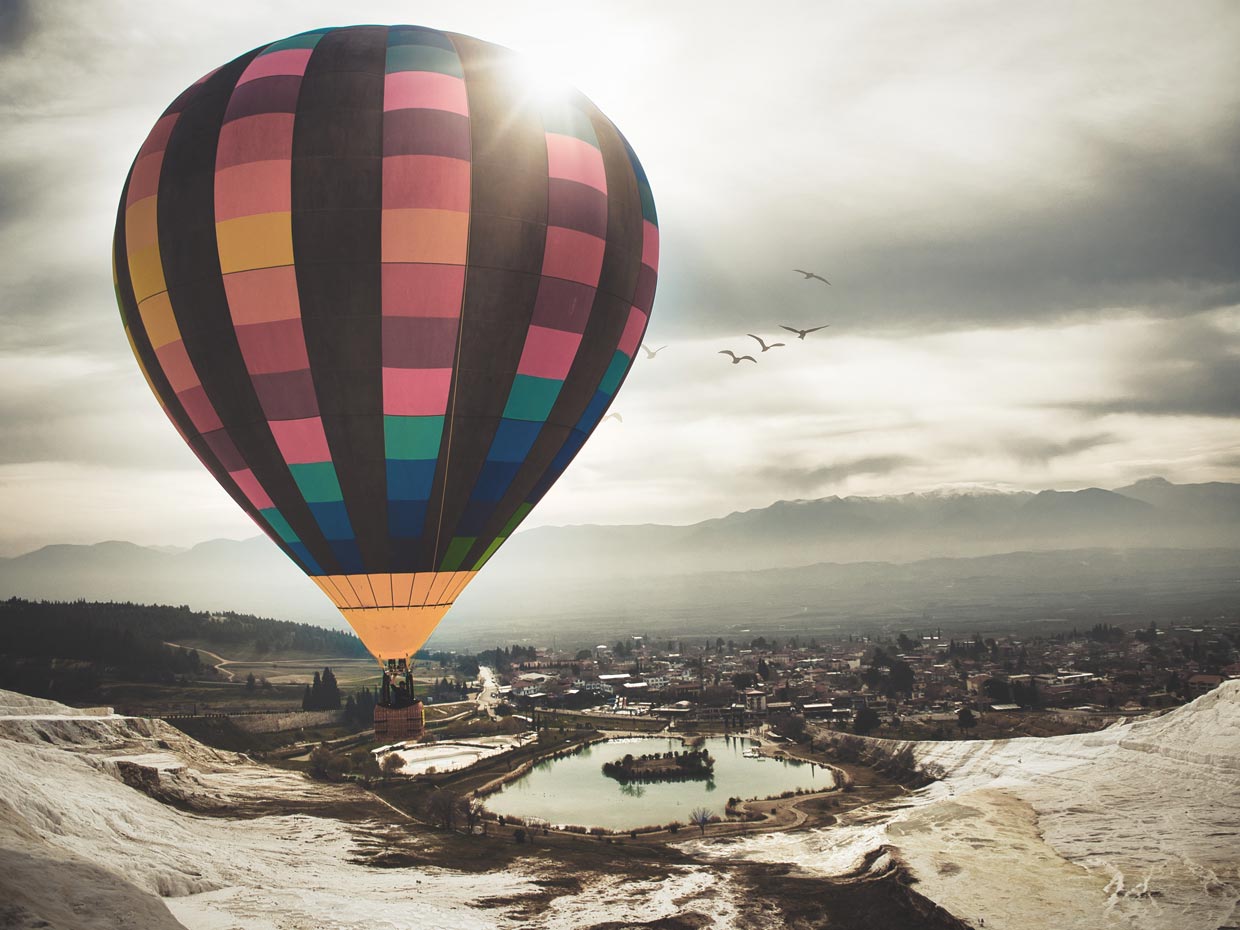 How to Get Pamukkale?

You can go to Pamukkale from many places and all the major cities of Turkey. The nearest city is Denizli. You can take a bus at different times of the day or go in your car. There are buses from most of the towns to Pamukkale. Travelers can also go to Denizli by airplane. The airport of Denizli is 252 km far from Pamukkale, and you can go from the airport directly to Pamukkale; it takes about 4-5 hours by car or bus and 6-7 hours by train. There are several flights from Istanbul to Denizli per day. Also, you can go to Pamukkale by train, and the nearest station is located in Denizli. Also, the other way is to get in a dolmuş, a shared taxi for traveling between cities. 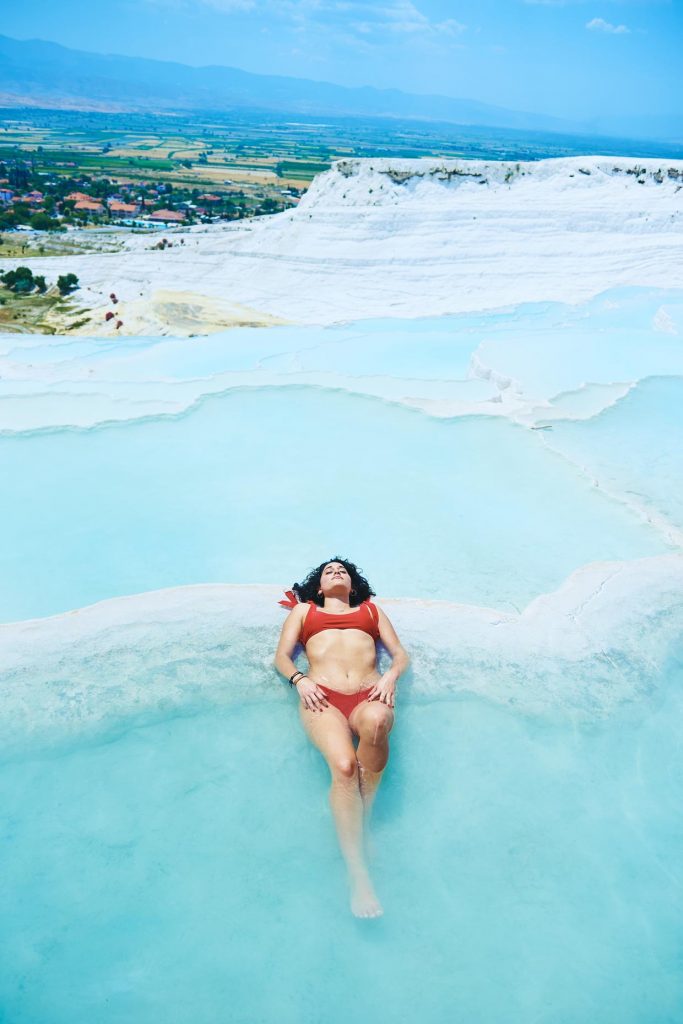