Luxor Temple is a strikingly graceful monument in the heart of a modern town, Luxor on the east bank of the Nile River, Egypt. This magnificent temple complex is constructed by the New Kingdom pharaohs Amenhotep III (1390–1352 BC) and Ramses II (1279–1213 BC). The main function of this complex was during the annual Opet festivals, when the statues of Khonsu, Mut, and Amun, were moved from Karnak and Avenue of Sphinxes, then reunited here during the inundation.

When you plan to travel, the most critical question is always where to, because the world has many wonders that one would want to see and explore at least once, which is why here we’re going to tell you why the Luxor temple in Egypt should be on top of your list. That being said, traveling to a place you have never been before can bring forth several questions that their answer could be detrimental between enjoying the most out of your trip or regretting ever setting foot out of your home. In this article, we have provided a list that will help you be prepared to enjoy the most out of your trip and make spectacular memories.

The History of the Luxor

Although the mud-brick houses and palaces of Thebes have disappeared, its stone temples have survived, and the most beautiful of these is the temple of Luxor. Luxor Temple is a large Ancient Egyptian temple complex located on the east bank of the Nile River in the city today known as Luxor, ancient Thebes, and was constructed approximately 1400 BCE. The temple was built by Amenhotep III but completed by Tutankhamun and Horemheb and then added to by Rameses II. To the rear of the temple are chapels built by Amenhotep III of the 18th Dynasty and Alexander. Tutankhamun and Ramesses II made other parts of the temple. During the Roman era, the temple and its surroundings were a legionary fortress and the Roman government’s home in the area.

For thousands of years, the temple was buried beneath Luxor’s streets and houses, and Eventually, they built the mosque of Sufi Shaykh Yusuf Abu al-Hajjaj over it. This mosque was carefully preserved when the temple was uncovered and, these days, it forms an integral part of the site today. In Luxor, there are several great temples on the east and west banks. Four of the significant mortuary temples include the Temple of Seti I at Gurnah, the Temple of Hatshepsut at Deir el Bahri, the Temple of Ramesses II, and the Temple of Ramesses III at Medinet Habu. The two primary cults’ temples on the east bank are known as the Karnak and Luxor.

The Valley of the Kings in Luxor, Egypt, is a site with over 60 tombs built for the pharaohs and powerful nobles of ancient Egypt. First, you should buy a general admission ticket at the gate, which will give you entrance to any 3 of the tombs. There are also a few notable tombs that you might want to buy a separate ticket for them. If you’re going to take pictures inside the tombs, you will need to buy a photography ticket, and as with most of the sites in Luxor, Egypt, the tickets are cash only, make sure to have cash with you. As we mentioned, There are over 60 tombs, but usually, only 6-10 are open to the public, and since with your ticket you can visit 3 of these tombs, here are some of the most interesting graves you can choose from.

In what was then Thebes, Luxor Temple was “the place of the First Occasion,” where the God Amon experienced a rebirth during the pharaoh’s annually reenacted coronation ceremony. Today remains of this vast complex include the colossal Great Colonnade Hall, almost 61 meters long, with 28 twenty-one-foot-high columns, its decoration largely undertaken by Tutankhamun around 1330 B.C. the thousands of sandstone fragments retrieved from the vicinity of Luxor temple contain carved and painted details of hieroglyphic texts and temple ritual scenes. Luxor Temple is also beautifully lit up at night, and you can walk around and see it from the outside.

Karnak Temple is a massive temple complex in Luxor, Egypt, and is considered one of Egypt’s most sacred sites. The temple is over 4,000 years old and is the second-largest religious complex in the world (after Angor Wat in Cambodia) in Karnak. You can touch the walls and columns and feel the groves of the hieroglyphic carvings with your hands. The Sound and Light Show at Karnak Temple is also extraordinary. After sunset, the temple is illuminated with an audio-visual show that explains how the temple was built and what life was like in ancient Egypt. Queen Hatshepsut’s Temple is one of the most impressive examples of ancient Egyptian architecture. The interior provides you with the most wonderful ancient art, and It’s also located on the west side of the Nile River, so it’s easy to visit after the Valley of the Kings. 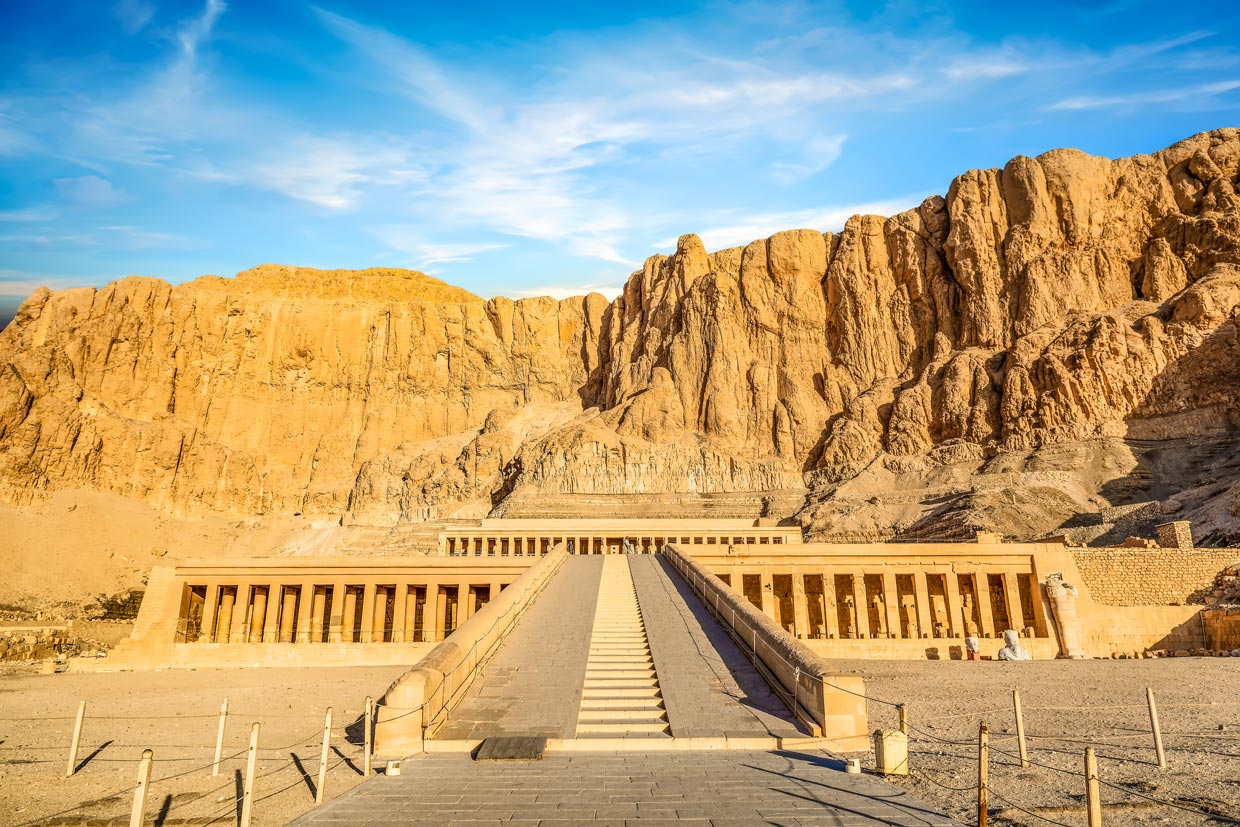 What kind of weather will you face in Luxor, Egypt?

Egypt is a wonderful country, but the hot climate poses the question of what is the best to wear while there. Egypt is hot throughout the year and is one big desert, it rarely rains, maybe only two days during the year, and the only thing you possibly have to worry about is a sandstorm. The sun will be too intense no matter the season you travel, but it’s a dry heat with extremely low humidity, so it won’t feel as hot as it is. Still, places like Cairo, Luxor, or the famous Valley of the Kings will be an actual furnace in summer, especially June to August, and usually, it doesn’t cool off all that much during the night. If you are visiting Egypt in winter, November, especially December & January, until March, you will be able to enjoy cooler temperatures around. The sky can be a bit overcast during that time of the year. But for visiting temples like Karnak, Luxor or the Giza pyramids it might be the more enjoyable time of the year to travel. 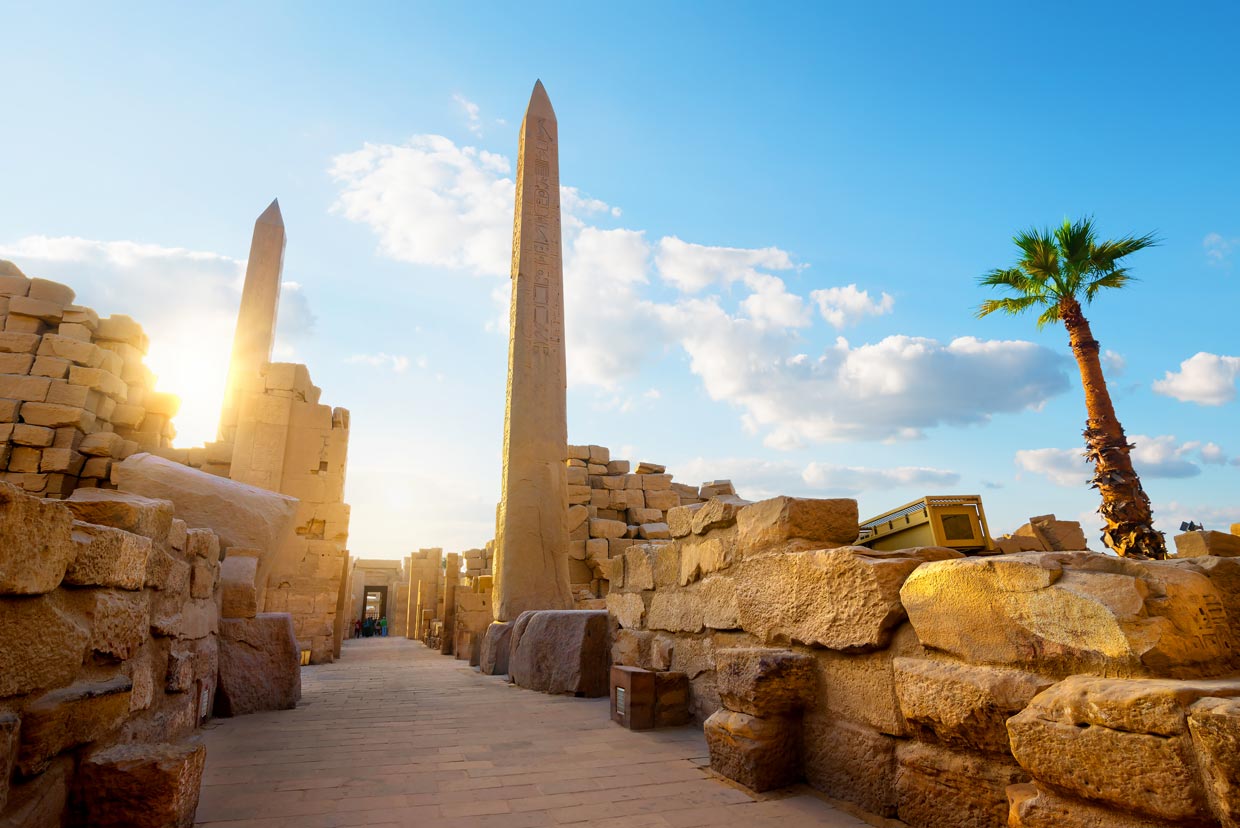 What clothes to wear while in Egypt?

Wear loose & long clothes and make sure always to stay protected from the sun. Since Egypt is a hot country and the laundry service is too cheap, we recommend staying away from overpacking and just picking a small suitcase. Remember that you will sweat quite a lot, there’s a lot of sand/dirt in the temple ruins, and also remember that sunscreen mixed with sand can leave stains on your clothes, not easy to be removed. So, for visiting Luxor, pack a spare or two and remember to bring at least one smart casual outfit for visiting mosques and good restaurants. When visiting Luxor, Egypt in winter, pack a light jacket since you will need it in the evening and because some places will have a massive air conditioner active. Consider bringing a small umbrella and a hat since the extra shade they offer could be quite helpful.

What shoes to wear in the Egyptian heat?

Picking the right kind of shoes for Egypt is difficult. The climate is hot, and the ground in most temples and around the pyramids is not even, usually quite sandy with rocks in between, so High heels and heavy boots won’t be the right choice. Instead, bring comfortable light walking shoes, and trekking sandals can be an excellent option for exploring the temples in Luxor, Egypt, and also a pair of closed shoes or leather shoes for less sandy places. Note that it is not uncommon for your shoes’ glue to melt due to the scorching ground, so It might be a smart idea to bring spares along.

An essential tip for visiting the Luxor temple in Egypt

It is quite vital to stay hydrated throughout the day while visiting various temples and tombs in Luxor’s heat. Be careful! Egyptian tap water is not edible. We don’t recommend using sterilizing agents either, as they mostly don’t kill tapeworm eggs. You won’t need to bring a canteen, but a shoulder strap to carry your water bottle will be quite a smart idea. In theory, you could also get a small daypack, but it usually means you’ll sweat a lot on your back. 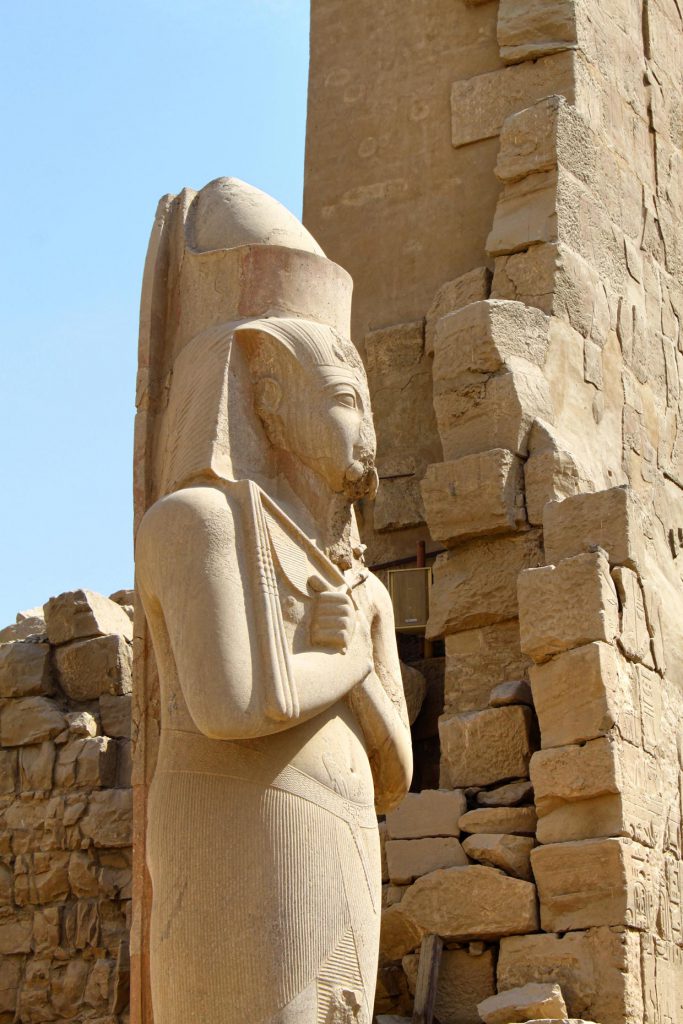 The best places to stay and rest in Luxor, Egypt

Bob Marley Peace Luxor Hostel, this is, definitely, the most famous hostel in town. With plenty of backpackers, it offers two and 4-bed dorms and private rooms: excellent location, great breakfast, good Wi-Fi, and friendly staff.

Luxor Guest House, located on the shore of the Nile River, on the West Bank side, but right next to the ferry station, this guest house is one of the best-rated places in town, and it’s easy to understand why. Excellent service, breakfast, super clean rooms, and everything at a very affordable price. This place is perfect for both couples and independent travelers.

Amon Hotel, with a stunning and lovely garden, Amon Hotel is another excellent choice in town for mid-range travelers. A hotel with a real character! The staff is some of the friendliest ever, very kind, and informative. The food is also great, and the location is better than ever—an excellent choice for families and couples visiting Luxor.

Hilton Resort and Spa, the Hilton is the top-rated top-end hotel in Luxor. Located on the Nile’s shore with excellent sailing boats’ views, this luxury hotel is everything you can expect from the world-wide famous Middle Eastern service.

The Colossi of Memnon in Egypt

How to get to the Luxor?

There are several ways to get from place to place in Luxor.  Firstly, as most of the incoming flights to Egypt arrive at Cairo International Airport, reaching from the capital to Luxor can be done by plane, taxi, rental car, train, or bus. The best method of getting around this ancient city would be by private limousine service operated by the driver. They can be accessed by most of the tour companies in Luxor and can also be booked by hotels that you are staying in. As buses are everywhere and cheap, going by bus from place to place is the most local way to travel and a terrific experience for those wanting to get a unique insight into the Egyptian way of life.  Your local hotel can obtain bus schedules and fares.

The Luxor Temple is only one of the magical places in Egypt, and surprisingly, whenever you visit this part of the land, the experience would be different. As we provide you with useful information and guides about places worldwide, we would love to hear about your stay in Egypt and the time you spend in The Luxor Temple. Let us know about your journey,