Kaymakli Underground City is an attractive destination for tourists from all over the world located in Cappadocia province. If you want to travel to Turkey and are interested in historic and strange places, don’t miss this underground city.    History  The exact time of building this city has not been determined yet; there are different […]

In This Article
History
Structure and the Location of Kaymakli
How to Get There
Entrance Fees
Is It Worth it?
Around Kaymakli Underground City
Where to Stay

Kaymakli Underground City is an attractive destination for tourists from all over the world located in Cappadocia province. If you want to travel to Turkey and are interested in historic and strange places, don’t miss this underground city.

The exact time of building this city has not been determined yet; there are different ideas, though. As the Turkish Department of Culture says, the history of this underground city goes back to the 7-8 century BC, and at first, it was built by the Phrygians in soft volcanic rocks. Then in Roman times, it was used by Greek.

So the next inhabitants were the Christians to be protected from other people’s attacks, as the Arab Muslims’ attacks in four centuries from 8th to 12th century and then attack of the Mongolians in the 14th century. Also, in the Seljuk era and Ottomans, it was a refuge for people from the rulers. Many civilizations have used the city to protect themselves. Many days of fighting and killing were happening then, and a shelter to survive those battles is still there.

Structure and the Location of Kaymakli

The main characteristic of Kaymakli city is that it only has one entrance. This element made it safer for its inhabitants while they were endangered. The door was opened just from inside the city so that the enemies couldn’t enter. After the gate, we find a 2.5 km2 city with many different places. It contains food storage, reservoirs, cellars, stables, kitchens, the church, and tombs in the tunnels and stairs.

Like any other underground city, there are several shafts for ventilation. Ventilation shafts can be seen from the fourth floor. It goes from the top to the downer floor like a lift in an apartment. The height of the shaft is about 80 meters. The underground city consists of 8 floors below ground, but four floors are open to the public nowadays.

On the first floor, you can see the small stable. It seems that there are other stables on the floors that have not yet been opened to the public. The passage at the left side of the stable has a door and goes to the church with two floors. On the right side, you see the spaces which seem they were living rooms.

The 3rd floor contains the main parts of the city. Multiple storage places, wineries, kitchens, and an interesting pot that recent research has proved that this place was used to melt copper. Also, the relief texture found on the third floor is very interesting. It is said that a large number of people were living in the city, and it can be proven by the numerous storage rooms in Kaymakli. Archaeologists say that about 3500 people were living there. The city is the UNESCO world heritage site and became open to the public in 1964. 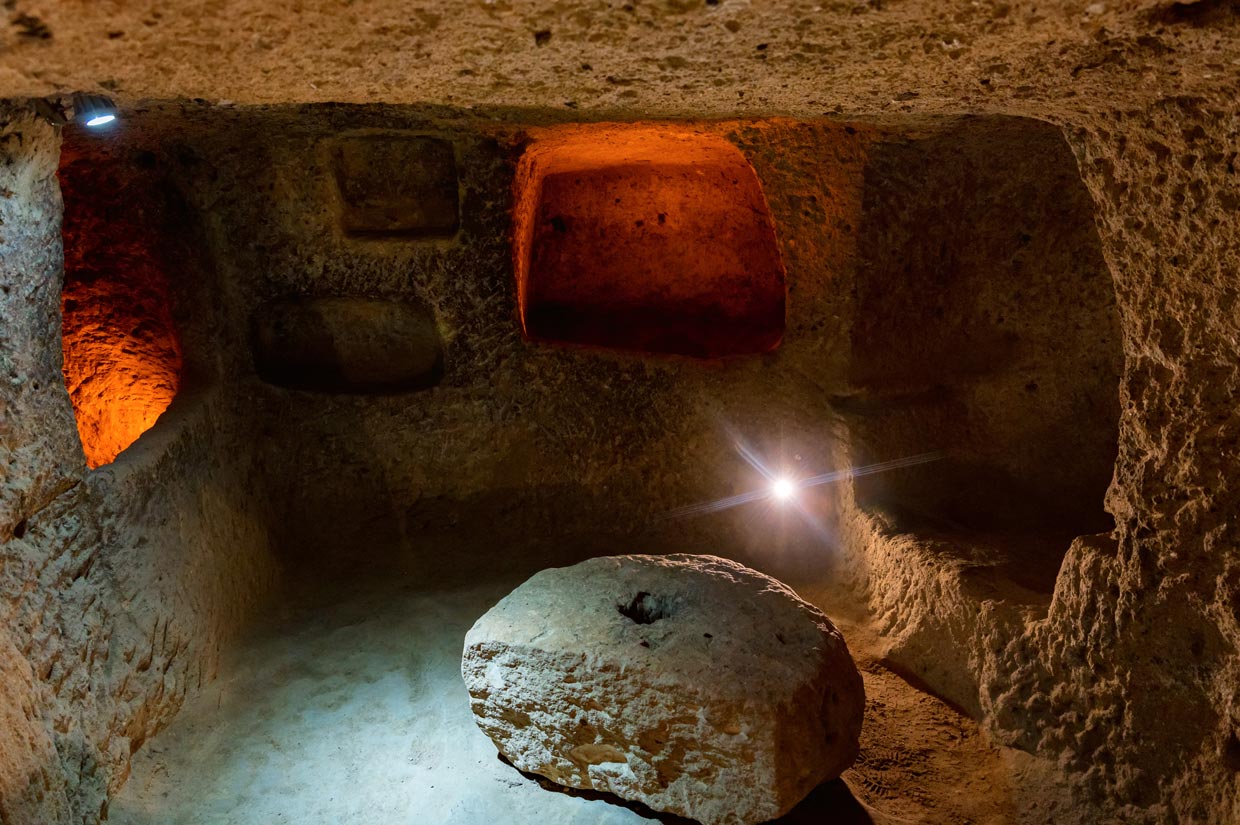 Although there are tours and special buses for the people who want to visit Kaymakli, you can go by yourself without fearing being lost. Most people stay in Goreme; there, you get into a minibus and go to Nevsehir, the nearest city to the Kaymakli village. Pay 2.5 TL, and you’ll be in the way for about 15 minutes. Ask drivers where you should go to continue your way from Nevsehir to Kaymakli. Get on another bus in Nevsehir, you’ll be in the way for about 20-25 minutes, and you have to pay 3 TL. When you get Kaymakli, you will enter a small market, pass the market, and you’ll get the entrance of Kaymakli underground city.

You have to pay 15 TL to enter the underground city. Spend at least 45 minutes visiting all the city. Pay attention to the signs and arrows.

Is It Worth it?

Although there are multiple underground cities in Turkey, Kaymakli has some advantages to be your choice. First, it is said that Kaymakli is the biggest underground city in Cappadocia, then it is a UNESCO world heritage site, and you don’t have to pay a lot to visit the Kaymakli, and also you can get there simply. Easy to access, cheap to enter; these are the reasons for you to decide.

There are one-day tours to visit tourist attractions around Kaymakli. Attractive places like Red valley and its 5-kilometer hiking nice path with beautiful sceneries, the Saint John church, a church built in the 5th century that is the biggest cave church in Cappadocia, the Fortress of Ortahisar with its amazing view, and the Pigeon valley. 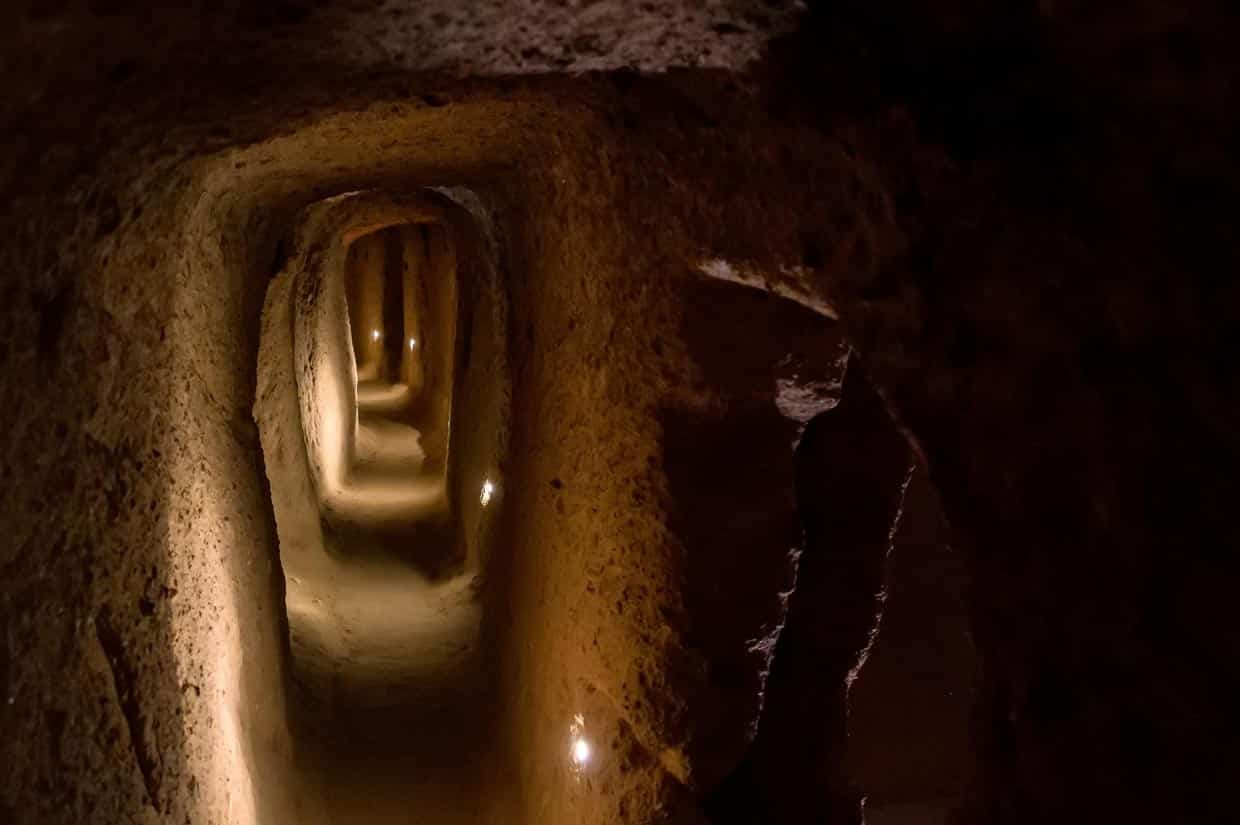 There are over 15 hotels near Kaymakli. The nearest one to the Kaymakli is Dilek Tepesi Cave Hotel and Aika cave Suits with an interesting structure. The hotels are different in prices and facilities. You won’t have any problem finding a place to stay.

In This Article
History
Structure and the Location of Kaymakli
How to Get There
Entrance Fees
Is It Worth it?
Around Kaymakli Underground City
Where to Stay