Hadrian’s Gate – The Most Famous Historical Site in Antalya

Hadrian gate in Antalya, Turkey is one of the most important historical sites in Antalya built in the name of the Roman emperor Hadrian, who visited the city in 130, rediscovered by Francis Beaufort in 1817.

It’s almost impossible to go to the city and miss Hadrian gate because of its location. If you’ve ever been to Antalya, you might have taken a picture at this gate too. That’s what most tourists do when they first see Hadrian gate; take lots of pictures of it to remember this special visit.

Back in the Roman era, Antalya in Turkey (then known as Attaleia) was a growing city. There were walls surrounding it for protection against attacks, and it was considered a major port.

Hadrian’s gate was one of the several gateways to the city but the only one remaining to this day. This Roman structure was built in 130 AD to commemorate Emperor Hadrian’s visit to Attaleia and was therefore named after him.

Hadrian gate is classed as a Triumphal Arch, a Roman monumental construction built in honor of a significant individual. So not only was this gate constructed for functioning purposes, but it was also an architectural masterpiece built to show off the empire’s glory.

According to some old-world travelers and a few letters found during the renovation of the gate, there used to be a second story to the structure, but it was apparently destroyed as time went by.

For some time, Hadrian’s gate wasn’t used as a gate. This is thought to be the reason that caused this historic structure to be so well preserved and in such good condition. It might be interesting to know that this gate was only renovated and restored in the late 1900s!

Like most Roman buildings, the Hadrian gate has legends told about it. The most famous one is the legend of the Queen of Sheba, who passed through this gate when she was on the way to Aspendos to visit King Solomon.

Of course, this legend isn’t based on truth since the construction of this gate was dedicated to Hadrian, who was born about 1000 years after Queen of Sheba and King Solomon.

Hadrian gate has ancient Roman architecture, with three archways all the same size, around 4m wide. That’s probably why it gets its other name, “Üçkapılar,” meaning “The Three Gates” in Turkish.

Out of the three entrances, the two on the sides are blocked, so you can only go through the gate from the main ( the middle) arch. This was done for preservation purposes. The ancient pavement is also now covered with a see-through material, so you can walk over it without it getting more crumbled.

The current structure of the gate is 8m high, although as we mentioned before, it is believed that there was another level to it, possibly a statue of Emperor Hadrian and maybe his family on top of it.

Except for the column shafts (which are made of granite), the gate was made entirely of white marble. The ceiling of each archway is decorated with astonishing floral rosettes and motifs. The beautifully decorated cornice and the lion heads are also a few of the mesmerizing details about Hadrian’s gate that you should look for during your visit.

The Buildings on the Sides

There are two towers on the sides of the gate. They were each built in a different era. According to the details of stones in the northern building, also known as the Tower of Julia Sancta, the construction of this building dates back to the Roman era, just like the gate itself. But it wasn’t built at the same time as the gate.

The other tower on the south of the gate was rebuilt during Seljuk sultan Alaeddin Keykubat’s reign. The lowest part of this tower is also from the Roman period. 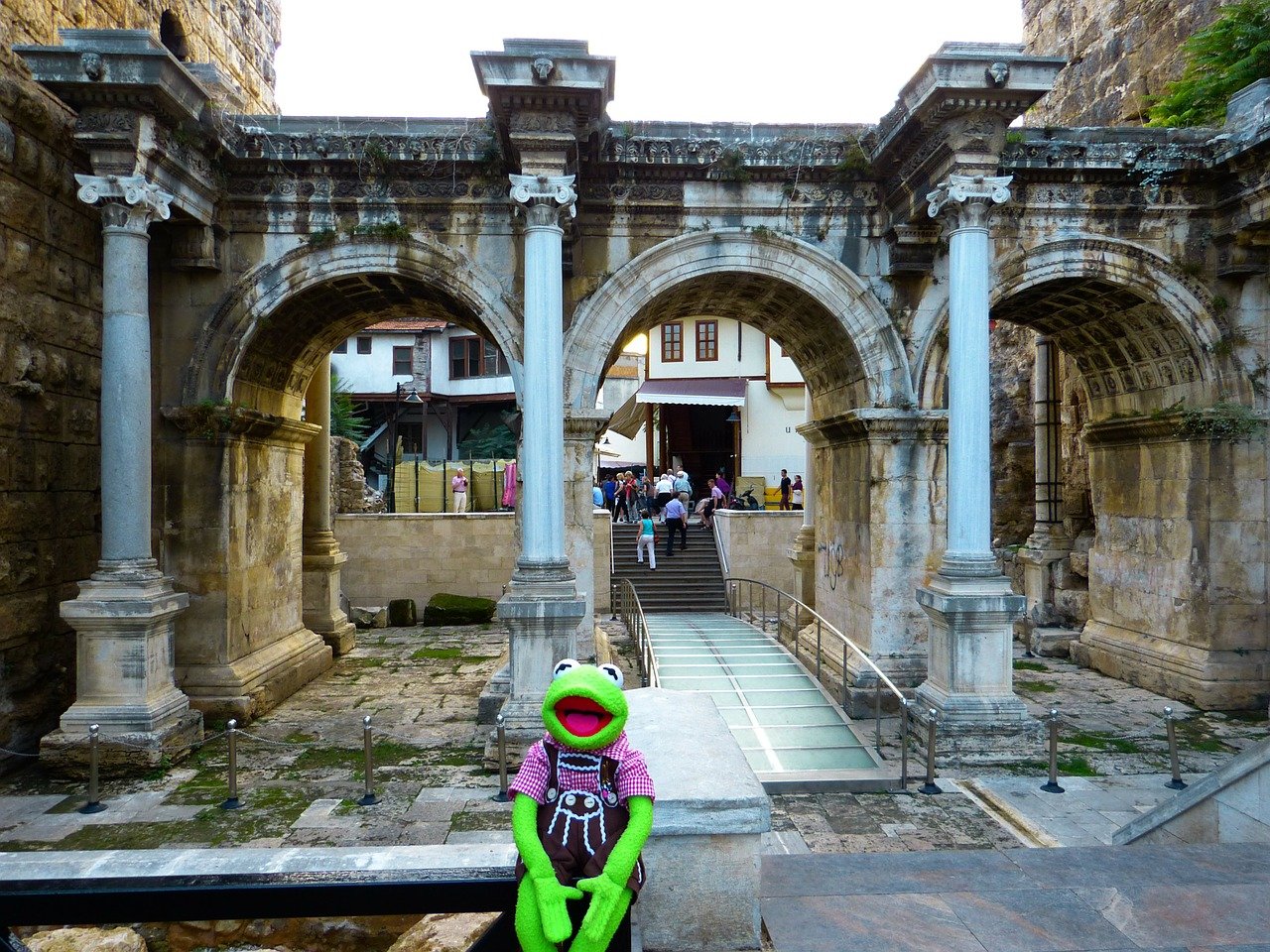 The castle gate is located in the center of Antalya on Atatürk Boulevard. It leads to Kaleiçi (the old town of Antalya), which you shouldn’t miss!

As it’s in the center of the city, you have many options to get there, but one of the best and cheapest ways is to take the tramway also known as the “Nostalji tramway”. You can get off at the Üçkapılar ( or Hadrian) station to visit the gate.

Over the gate, towards the old town (or as the locals call it, Kaleici), there are several cozy bars, cafes, and restaurants. You will also see a few souvenir shops there.

You should definitely enjoy a drink or a bite at one of the restaurants or cafes there while visiting Hadrian’s gate. You can also check out the park to the east of the site, where a lot of people choose to sit and enjoy the view.

Here are a few of the food places around the corner from Hadrian’s gate that is very popular with most tourists:

Located in the center of the city, this pizza place is the most popular one in Antalya. The pizzas are said to be the best in the city, and all the reviews are extremely positive.

The menu is vegetarian-friendly, and there are gluten-free options too. So if you crave pizza while in the location, just go straight to this place and thank us later!

Possibly the most recommended bar in the old town, X pub should be on top of the list of bars in Antalya. The music and the interior design of the place have created such a calm and chill atmosphere that you won’t be able to resist it. Don’t miss out on the superb cocktails and drinks!

Just opposite Hadrian’s gate, there’s a small ice cream place that has gotten a lot of attention for its high-quality gelatos and other types of ice cream. You should check it out if you visit the site on a sunny day! It’ll be a great mood booster for sure.

Although the gate itself is better to visit in the daylight, the surroundings might be giving off a more charming vibe at night. As it gets darker, the bars and restaurants make the site look ten times more delightful with their low lights and candles on the outside tables.

This doesn’t mean you shouldn’t check out this gate in the daylight. After all, you can’t see the details of this remarkable structure in the dark. And let’s not forget about pictures! You’d definitely want photos of Hadrian’s Gate in the daytime with the gardens around it as your background.

If you have all week to visit the site, we recommend weekdays since it usually gets crowded during weekends there.

It’s not every day that you get to enjoy a drink at a bar or relax in a park with the view of a 2000-year-old monument. We recommend you take advantage of this golden opportunity and admire this Roman masterpiece in the center of the vibrant and modern city of Antalya.