Ephesus is the most important city of ancient Greek in Ionian Asia Minor and its ruins are still located in Selƈuk, a village in İzmir province, western Turkey.
In This Article
History
Architecture
The Old Ephesus
Where to go in Ephesus
Best time to visit Ephesus
Getting around in Ephesus
Costs in Ephesus
Accommodation
What to pack for Ephesus

Ephesus needs a full day trip to be discovered. Of course, just a day is not enough for an ancient city with thousands of years of history but imagine a day out with an early flight to Ephesus, the ancient city with many places to see and a great opportunity to dive into the history and old ages. Who doesn’t like drinking a cup of tea in Turkey and one of its famous cities? What about the world’s greatest outdoor museums?

And yes! Ephesus is worth visiting. I don’t say that! Check out the reviews and read more about its features.

Ancient cities have strong backgrounds, and only a good approach to them can reveal those old places’ true identity. Ephesus is one of those many ancient cities which goes back to the tenth century BC. According to the Book of Revelation, one of the Seven Churches of Asia was Ephesus, and it carries a lot of religious stories about this place.

“The Golden Centuries” for Ephesus refers to when the capital city of Roman Provincial Administrations and the permanent headquarters was Ephesus. It is said that easy access to the sea has played a significant role during this period of time. Many determining things have happened there, and many rulers have sat on the throne in Ephesus. The result is a city full of archeological places and ruins that date back to the first civilizations.

The style of monumental buildings in Ephesus seems like another world you can’t remember having seen before. The famous buildings belong to many eras, and in each building, signs refer to a specific period of time in History. The Library of Celsus is one of the many architectural wonders of the Ephesus. It is just like a two-storeyed building when you look at it from the outside and was once known as the third biggest library of the ancient world. This type of architecture can’t be found everywhere in the world.

Another excellent example of this ancient type of architecture is Ephesus’ Grand Theatre. what do you think about 25000 spectators all in an ancient place shouting, singing, or applauding all together? This moment you are imagining has happened in the Ephesus’ Grand Theatre thousands of times. Of course, describing Ephesus’ architecture can not clarify everything about it, but as you look at the big buildings in Ephesus, you will understand that the description can’t give you the feeling of being in front of an ancient, Greek-style building. Shh! Listen carefully, dive into history; a man is yelling in a fight with an animal. Where? There in the Grand Theatre.

The old Ephesus is all about this city’s old character when the Romans and Greeks had many things to do. Considering the importance of religion and supernatural beliefs in those ages, many superstitions and stories have been said in this land. These stories can show us a bit of the old Ephesus and the most important issues of that period of time.

It is said that the house of the Virgin Mary and Basilica of Saint John are in Ephesus. These highlighted parts of the city show that the old Ephesus was a city of religions in the past. The ruins and the monuments tell us about the old Ephesus’ political identity and its clear role in the country. Now the New Ephesus attracts those who are still looking for the Old Ephesus. Visitors have said they have found it, the Old Ephesus in the New Ephesus! 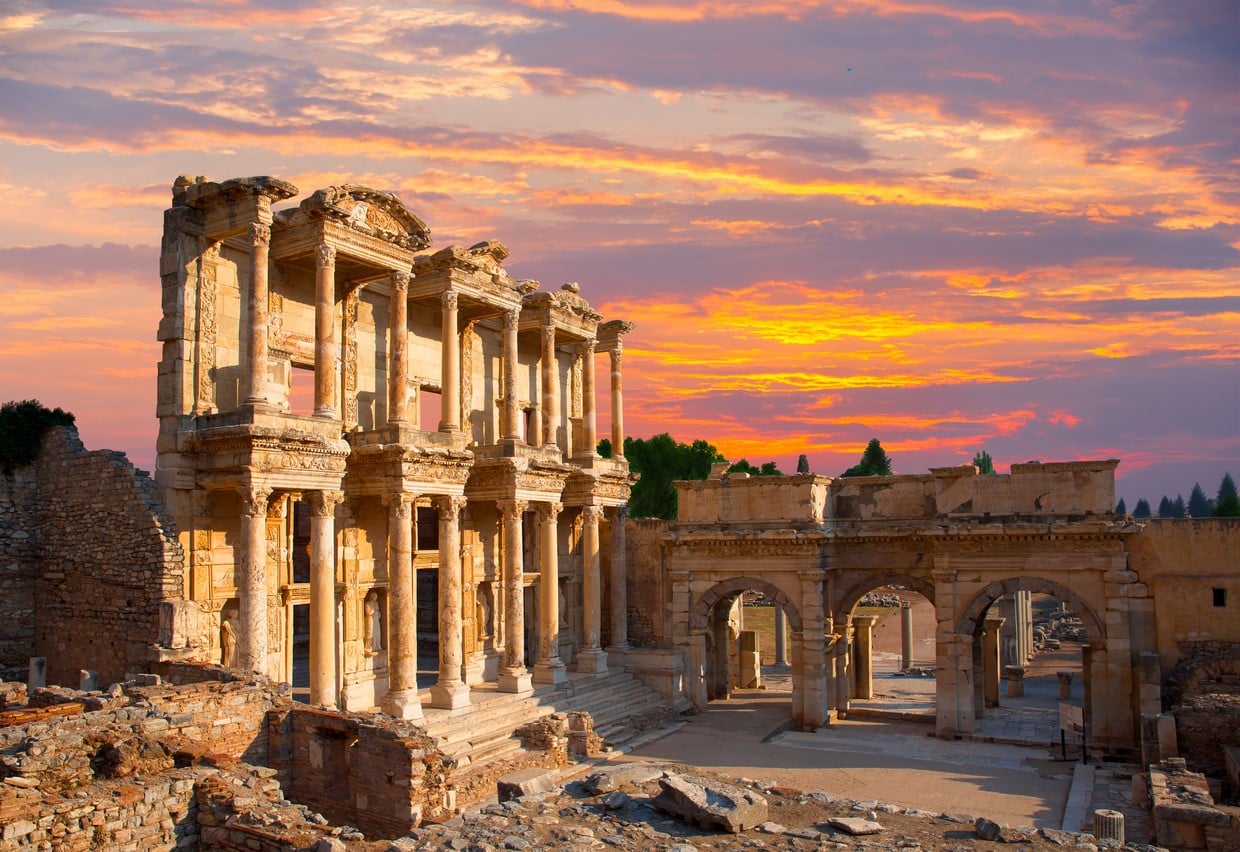 Where to go in Ephesus

The most popular things to do in Ephesus are visiting sights and enjoying a calm stay in the city. So your To-Do list in Ephesus is mostly about visiting places. Here we made a list of the places to visit in Ephesus:

1.A house with a religious history

The House of Virgin Mary is a religious site near Ephesus’s ancient ruins and is known as a pilgrimage destination for many people. It is believed that The House of Virgin Mary was the place where the Mother of Jesus lived, and according to the story, she passed away in that house after Saint John took her there. Apart from the building and the site, locals’ religious stories can be another cool part of Ephesus. Asking believers about their feeling at the moment of the first impression would be a good idea. Thirty minutes can be enough for visiting the house of the Virgin Mary.

2. They used to read

Vitruoya was a Roman architect who designed the Library of Celsus in memory of Celsis Polemeanus, a Roman senator and Governor in the old ages. This library, which housed between 12,000 to 15,000 manuscripts, scrolls, and books, used to be super famous in the world. The Library of Celsus is big and remarkable when it comes to design. Building and well-designing a great building as a library in that age is a surprising fact that shows the importance of science and knowledge among the rulers and the people of ancient ages. They used to read! And that’s why after hundreds of years, many people tend to visit the ruins of their civilizations.

The Greek style of adventure is a little bit different. We are talking about the time people gathered in the Grand Theater to watch a performance by an artist or the fight of men and animals over almost nothing! The most important place to meet others and participate in ancient times’ social life is now the biggest and the most wonderful structure in Ephesus. The audience was on the seats facing the fight place or perform place. The seats are shaped in a semi-circular way, and around 24,000 people can be there simultaneously. This fact is that every day of old Ephesus’ day to day life could be a good day with daylong orchestras. Get there and try to picture yourself as a real audience, think of the performance and the atmosphere. That’s the souvenir of Ephesus: an everlasting memory of ancient people!

4. Signs of being in Turkey

Turkey is a leading country in the world for shopping, and as there are many products available there, you may miss the best things to buy in Turkey. Fortunately, Ephesus is a good place to find special things and materials. Leather, carpet, jewelry, and ceramics are the best things you find there. The quality is beyond the standards, and the bazaar’s atmosphere is a reward for the visitors. The carpets’ pattern, the smell of leather, shining pieces of jewelry, and colorful ceramics are all Ephesus’ golden parts. Make sure you will have a piece of these experiences.

5. Not a completed house but a perfect one

Archeologists have found a place in turkey, which was a great archeological step forward for the country. Terrace Houses of Ephesus are some ancient houses with damaged constructions. They discovered this site on a hill over the famous library of Ephesus. Those newfound houses used to be usable from one century BC to 7 centuries AD. Terrace Houses include a majestic piece of art that is the main reason for its fame and popularity. Beautiful mosaics and frescos in the decoration of those houses are the first things you can find interesting and artistic. The name of Terrace houses comes from the fact that most houses are built upon each other.

6. The destination is history!

Deep inside the city Ephesus, there is an attraction in which discovery is possible. That is the famous Marble Street in Ephesus. The most favorite part of the city on this street is the many ruins and structures around it.

This area used to be a residential area, and there was some basic role not allowing all to come over. Chariots didn’t have permission to get in. Fortunately, these days visiting this brilliant attraction is easily possible.

The best time to visit Ephesus is NOW! Why should you postpone a tremendous visit to another time? But if you care about the best time other tourists tend to go there, you must know that the summertime is the best time. This is because getting around is very easy during the summer and we can call it “festival time.” The average temperature is about 10C/40F. Heavy rain and freezing weather can’t be found there, but the rainy days are October and April. If you want to pack your stuff in January and February, consider your warm clothes not to get cold in the coldest time of Ephesus. April, May, October, and November are the best time for traveling to Ephesus concerning weather and climate.

Getting around in Ephesus

As long as you are traveling in Turkey, there isn’t any reason to be worried about getting around in the city. Ephesus is not an exception, and a variety of public services offer you the best options. Generally speaking, traveling to, from, and around all the sites, including beaches, Archeological sites, or towns, is super easy with minibusses and trains. Taxi services are very convenient, and the city has made a good transportation system for the residents and tourists. 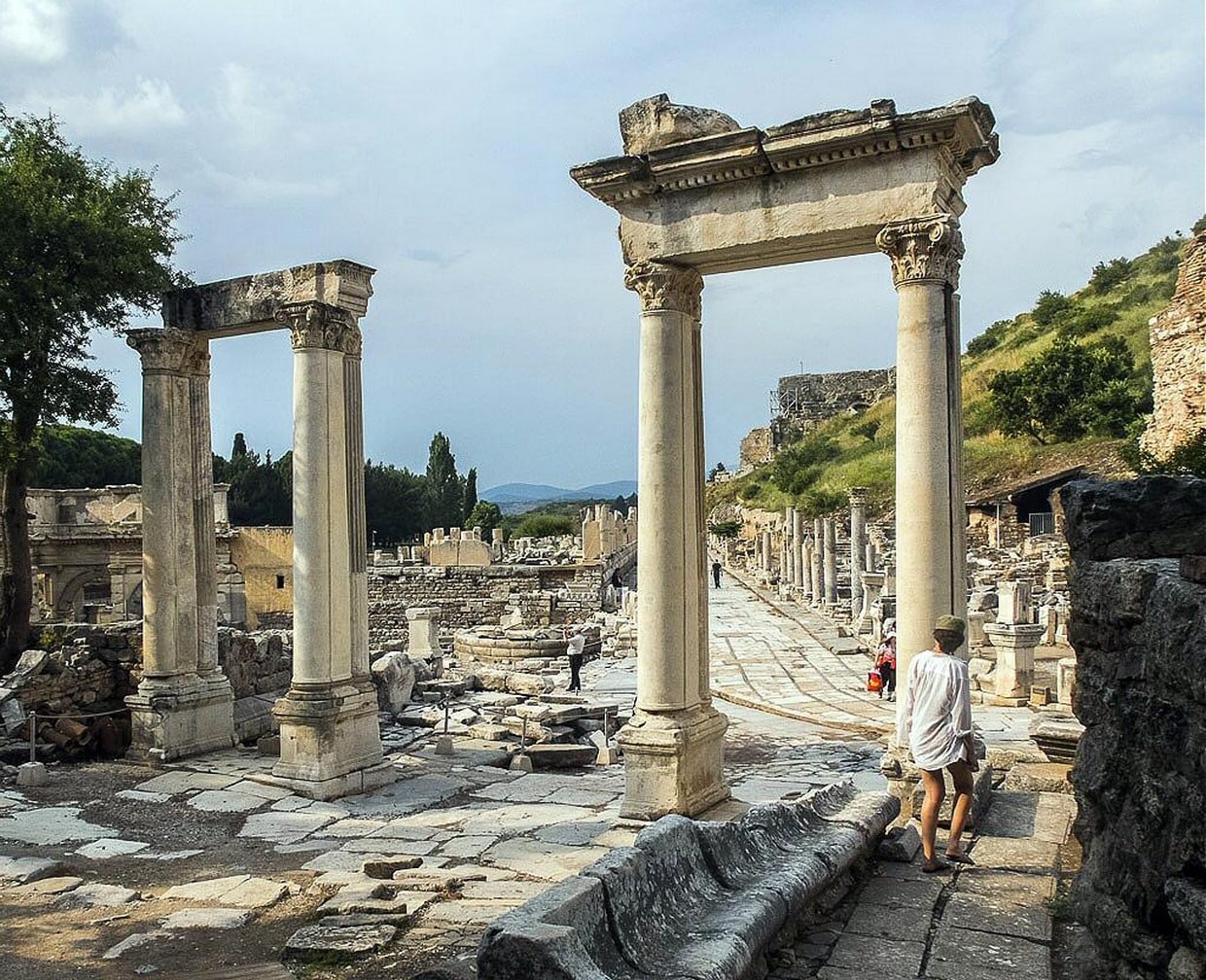 Costs in Ephesus are almost the same as the costs in other cities in Turkey. Previous travelers reported an average amount of money you may need during your stay in Ephesus, and that is about 10 Dollars a day, but obviously, many factors can change this number. Don’t count on the numbers; you’d better plan for yourself; however, just to have an idea, a one-week stay in Ephesus would cost about TRY550 and more. Check the price of the hotel you are going to stay in before you go there. By the way, the currency is Lira. Use your calculator not to get confused. 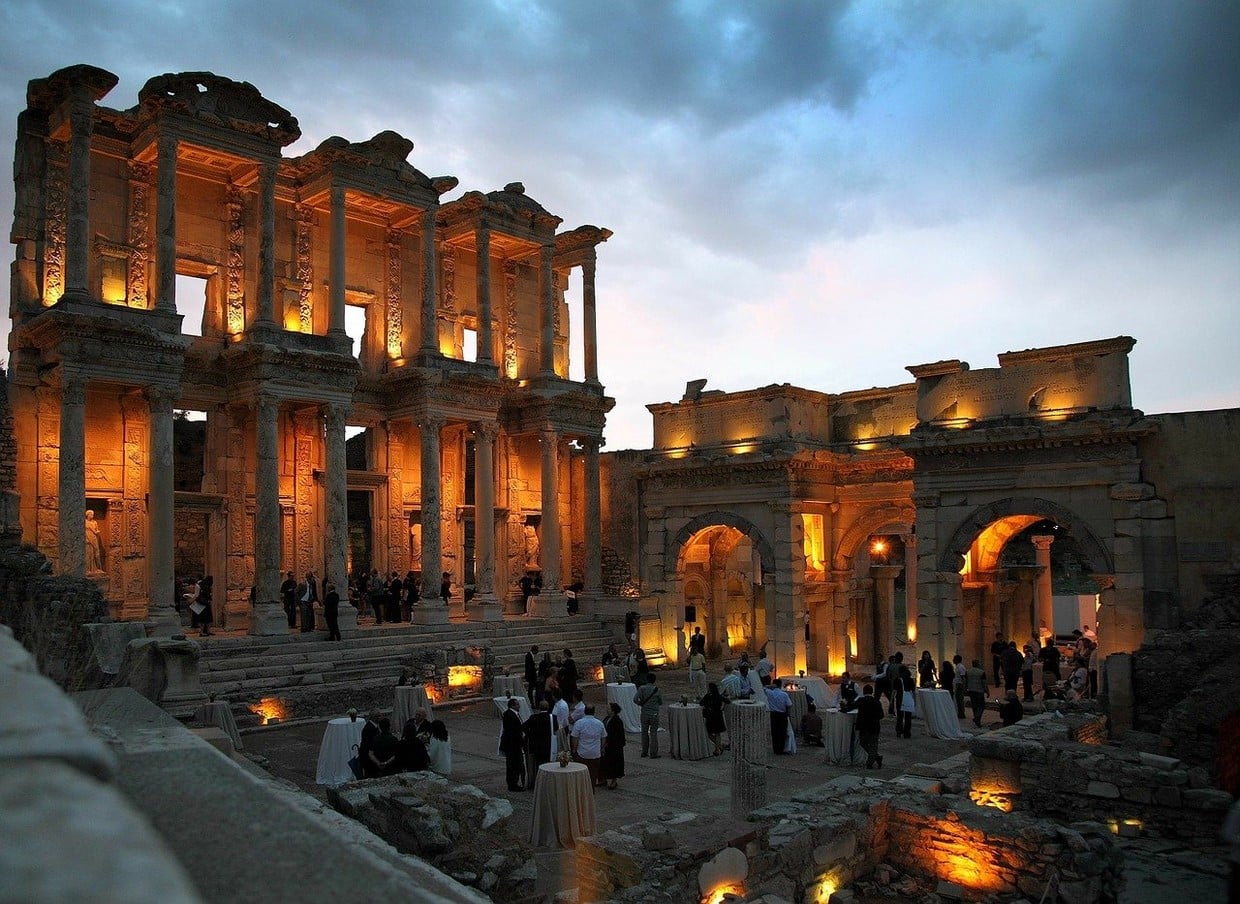 Turkey has tried to prove itself with its rich culture and facilities. Tourism and hosting are not inconsiderable for Turkey’s people, and due to that background, accommodation is at a good level compared to other countries. Ephesus is also like other parts of Turkey, and a visitor won’t face any problem with accommodation. The reported average price for one person to stay in a hotel in Ephesus is about TRY35 to TRY 80. Hotels are varied, and you can find a good one based on your budget.

What to pack for Ephesus

Nothing special would be on the list, but there are some tricky things you might know about clothes and wearing style. For men, a simple style would be appropriate and not a big deal, but for women, there are some places where the wearing style is a bit of an issue. These places are sensitive, and the locals expect you to cover your body and appear there properly. Wearing normal trousers and carrying a scarf would be a good idea when the sun is doing its job, and you want to protect yourself and your skin.