Chora Church is one of the most distinguished historic sites in Istanbul, Turkey. The Church of Chora is very old, and it has experienced many incidents and has been rebuilt several times. One of the most costly renovations to the church took place in the 12th century after an earthquake almost completely destroyed it. The last renovations of this church have been done to turn it into a mosque for Muslims. In Byzantine times, this church was one of the most important churches, and people came from different places to watch and worship in it.

Chora Church is one of the magnificent historical structures in Istanbul, Turkey. This church was built in the 4th century AD. It was originally known as the Church of the Holy Savior of Chora. During the Ottoman Empire, in 1511, this church became a mosque. With the coming to power of the Turkish government, the Chora Church became a museum in 1945. (Photo by fusion-of-horizons via Flickr)

The paintings and tiles that were in different places of this church were very eye-catching and unique. Unfortunately, during the Ottoman Empire, many of these paintings were covered for religious reasons, and over time, destructive effects were left on these beautiful masterpieces. The reason was that the paintings were mostly telling Bible stories.

During the 4th century

The Chora Church was built as part of a complex outside Constantinople’s city walls, to the south of the Golden Horn, erected by Constantine the Great in the early fourth century. The church was incorporated into the city’s defenses when Theodosius II built his strong land walls in 413–414, but the name Chora persisted.

During the 11th century

The fabric of the current building dates from 1077–1081, when Maria Dukaina, Alexius I Comnenus’ adoptive mother, rebuilt the Chora Church as an inscribed cross or quincunx, a common architectural style at the time. Unfortunately, early in the 12th century, the church partly collapsed, most likely due to earthquakes.

During the 14th century

Isaac Comnenus, Alexius’ third son, reconstructed the church. The church as it stands today, though, was not finished until the third phase of construction, two hundred years later. Many of the church’s fine mosaics and frescoes were donated by influential Byzantine statesman Theodore Metochites. Between 1315 and 1321, Theodore completed the impressive interior decoration. The mosaic work is the most beautiful example of the Palaeologian Renaissance. Unfortunately, the musicians have yet to be identified. The usurper Andronicus III Palaeologus forced Theodore into exile in 1328. 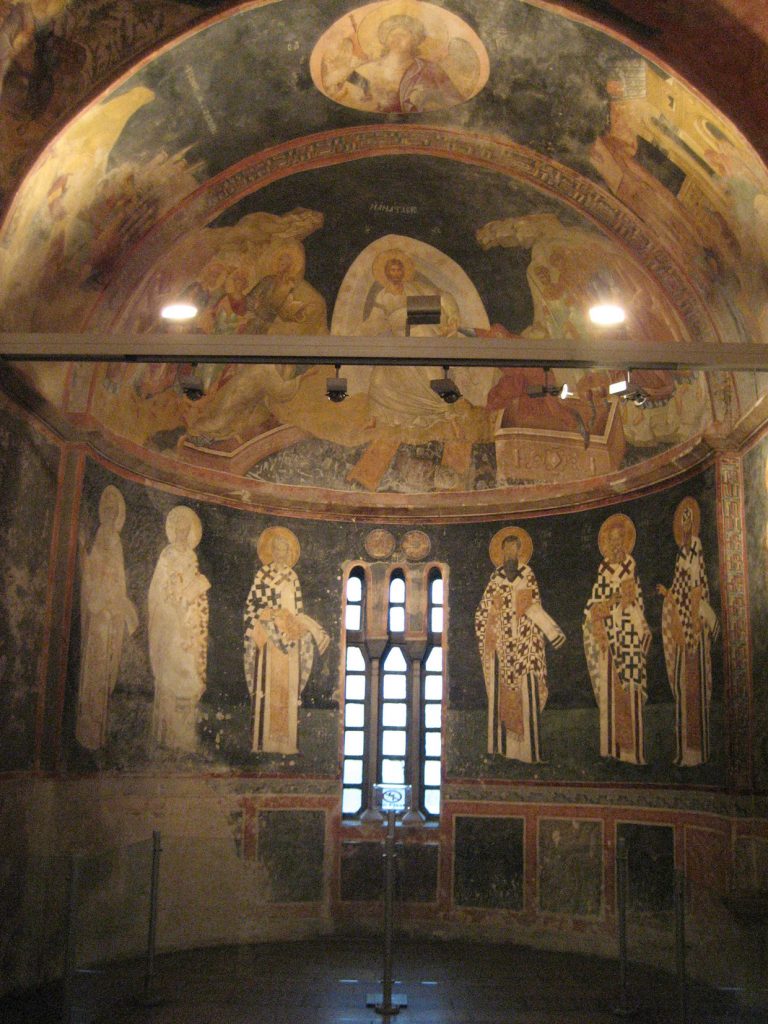 The Architecture of Chora Church

The church building can be divided into three parts, and it has six domes. Chora’s architecture is very astonishing and impressive compared to its historical antiquity.

The Chora Church is smaller than any of Istanbul’s other remaining Byzantine churches (it spans 742.5 m2), but it stands out because of its almost entirely intact interior decoration. The narthex (entrance hall), naos (outer body of the church), and “parecclesion” (side chapel) are the three main areas of the structure. Two above the “esonarthex”, one above the “parecclesion,” and three above the naos, the structure has six domes.

The Chora Church’s primary west door leads into the narthex. It is divided into two parts: the outer, or exonarthex, and the inner, or Esonarthex, which runs north-south.

The first portion of the church that one joins is the exonarthex (or outer narthex). It is a 4 m wide by 23 m long lateral corridor that is partly open on its eastern length into the parallel Esonarthex. The Esonarthex opens out from the southern end of the exonarthex, creating a western ante-chamber to the “Parecclesion.”

The Esonarthex (or inner narthex) is a dual extension of the exonarthex. The esonarthex is 4 meters deep but just 18 meters tall, like the exonarthex. Its middle, eastern door leads to the naos, while another door at the esonarthex’s southern end leads to the parecclesion’s rectangular ante-chamber. A door from the esonarthex opens into a wide west-east corridor that passes along the northern side of the naos and into the prosthesis at its northern end. Thus, there are two domes in the Esonarthex. The smaller is above the northern hallway entry, while the larger is halfway between the naos and pareclession exits.

The esonarthex’s central doors lead into the naos, the church’s main body. The church’s highest dome (7.7 m in diameter) is located above the naos. The modest apse is flanked by two smaller domes: the northern dome is over the prothesis, which is connected to the bema by a short passage, and the southern dome is over the Diaconicon, which is accessed via the parecclesion.

14-Day Trip – Exploring and Experiencing the Pearl of Africa Uganda