Carlsbad Caverns is one of the most famous national parks in the United States. There are more than 20 rooms in the Carlsbad Cavern. However, not all of them are available for public visits. The reason is that not all of them are safe and are not easily accessible. Overall, there are two ways for the self-guiding tour. Each of them leads to different rooms and shows various aspects of the beauty inside. One of them is the Big Room, and the other is the Natural Entrance.

Most of its fame goes to the USA’s most giant chamber, the gorgeous Big Room. There are other fantastic caverns with magnificent geologic formations. Carlsbad Caverns is a place for everyone; you can hike 225 meters down through the Natural Entrance or simply use the Visitor Center elevators. Don’t fret; professional guides will help you through the trails, and if you want, you can do it by yourself. The list goes on! Join the Bat Flight Program and see more than 400.000 bats getting out of the caverns.

It is said that many were aware of the existence of the caves. However; It was 16-year-old Jim White who came to the cave for the first time. This coming happened in 1898, but there is much uncertainty regarding the first person to discover the entrance.

Before 1932, visitors had to walk about 250 meters down a steep ramp to reach the Cavern’s entrance, which wasn’t easy for everyone. In 1932, entering got more manageable when they installed two big elevators to take visitors in and outside of the caverns and structured a modern Visitor Center with a cafe, waiting room, a museum, and a first aid area.

The Center continued progressing, and in 1959, a brand new center was ready for operation. Tour operation was shifted to a better building, and the old buildings near the cave were removed afterward.

In 1967 self-guided tours through the Big Room started. There were guides at particular locations to help the passing visitors. Finally, at the beginning of 1972, people were allowed to visit the Caverns, entirely and through self-guided tours.

Inside the Carlsbad Caverns National Park

The Big Room, also referred to as “the hall of giants,” is a massive limestone chamber in Carlsbad Caverns. The Cavern was once described by the American actor Will Rogers as “Having the appearance of the Grand Canyon, but with a roof over it.” with almost 1.5 km long, 190 meters wide, and more than 75 meters tall at its highest tip, the floor of the Big Room is nearly 3.3 hectares.

The big Room is considered the fifth-biggest chamber in North America and the 28th largest on the earth. There is no cave chamber more extensive than the Big Room in North America. Six football grounds can easily fit there.

The path through the Big Room is moderately smooth. As it is a self-guide, you decide how fast to do it. However, it is estimated to take about one hour and a half to reach it. If you’re not in the mood to complete the whole path to the Big Room, you can shorten your walk by choosing the 1-km path. It will take about 45 minutes.

The Big Room is reachable from both Natural Entrance and the elevator. One can complete the Natural Entrance trail or use the elevator that is located in the Visitor Center. You can enjoy this trail with a pretty easy ascent and descent regardless of how much time you have to spend.

Several restrooms and a snack bar are placed underground next to the Big Room Trail and above ground at the Visitor Center for more convenience.

This indirect path reaches many prominent and popular rooms, such as Bottomless Pit, Giant Dome, Rock of Ages, and Painted Grotto. As a visitor, you should miss none of them.

Hiking through the Natural Entrance Trail is something that you can’t miss. This 2-kilometer way is highly precipitous and has many switchbacks. On average, you’ll need about an hour to complete this trail and go more than 225 meters down into the Cavern—no need to worry if you’re not physically ready for hiking. Use the elevations in the Visitor Center for going down into the Cavern and returning from them.

The Natural Entrance Trail lets you step in the path of pioneer explorers while seeing impressive rock formations. Not all of the rock formations in this trail are named; still, the Whale’s Mouth, Iceberg Rock, and Devil’s Spring are among the gorgeous formations of the Caverns.

The Big Room is the most significant draw of the Carlsbad Cavern; however, more things expect you there. You can pay for a walk or do it by yourself. “You should definitely see all of the caverns,” many visitors say. The other highlights of the Carlsbad Caverns are King’s Palace, Bottomless Pit, Giant Dome, Lion’s Tail, Slaughter Canyon Cave, Green Lake, and Spider Cave. 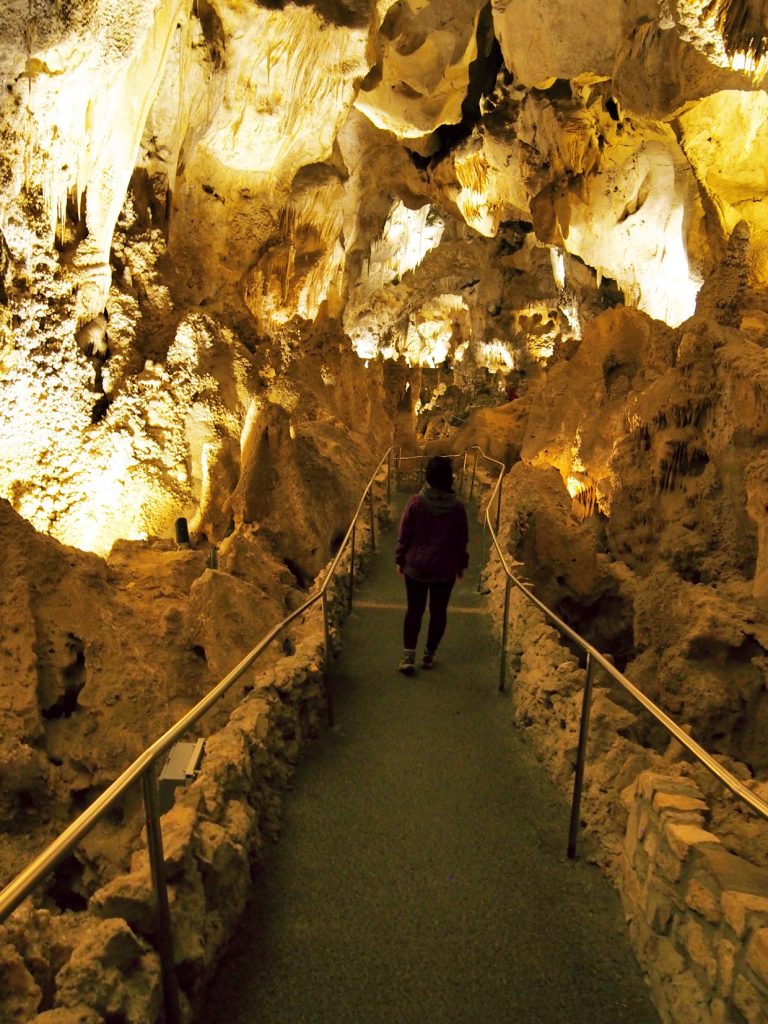 Bats are one of the main interests of visitors who attend Carlsbad Caverns. If you are visiting from May through October, you get the chance to participate in the Bat Flight Program, and that’s totally free! Also, no reservation is needed. A short five-minute trek from the Visitor Center will take you to the Bat Flight Amphitheater, located in the Natural Entrance, where the magic happens! There will be rangers who talk about bat species too.

From Memorial Day to October, you can join this program daily and in the evening. If your visit is scheduled before late May, you’re blessed to watch the bats leaving the caverns at night. This is the time when they just got back from their migration. Keep in mind that with more summer days and shorter days, the program’s starting time changes. Another thing is that the bats aren’t always on time, and a lightning strike may cancel programs.

To protect the bats, The Bat Flight Program and surrounding area are off-limits to electronic devices. Researches show that flashlights and sounds cause changes in bats’ behavior since they are used to darkness and silence. Also, because they move fast, filming and photographing them is difficult.

The park’s diverse ecosystems accommodate a diverse range of wildlife. This area is placed in the crossings of a desert, mountains, and southwestern Great Plains. This conjunction enhances diversity.

Many species can be found here, at the territorial limits of their habitats. Overall, there are more than 65 species of mammals, about 360 bird species, 55 different reptiles and amphibians, and five fish species. Southwest Deserts holds a considerable diversity of mammals, birds, reptiles, and insects.

The deserts of the Southwest have some of the highest diversities of mammals, birds, reptiles, and insects in the USA. There are cougars and a variety of birds and mammals nesting there. The mammals build nests in the caves to raise their young, and migrant species raise their young.

Among the mammals of the Carlsbad Cavern area, bats are undoubtedly the most prominent species, especially the colony of Brazilian free-tailed, cave myotis, and fringed myotis bats. These bats are one of the main reasons that the Carlsbad Caverns are so special. Besides them, there are 14 other species of bats. Fun fact: they don’t all prefer to roost in caves!

Other species of Carlsbad Cavern park are listed below. These species include inhabitants of the area, migrants, and restored species. Among the mammals, there are Mule deers, cougars, ringtails, javelina, and Elks. The Ladder-backed Woodpecker, black-throated sparrows, and Northern mockingbirds are observable and considered common birds.

There are other common species in the area, such as the mint family, ferns, the milkweed family, and mustard families. 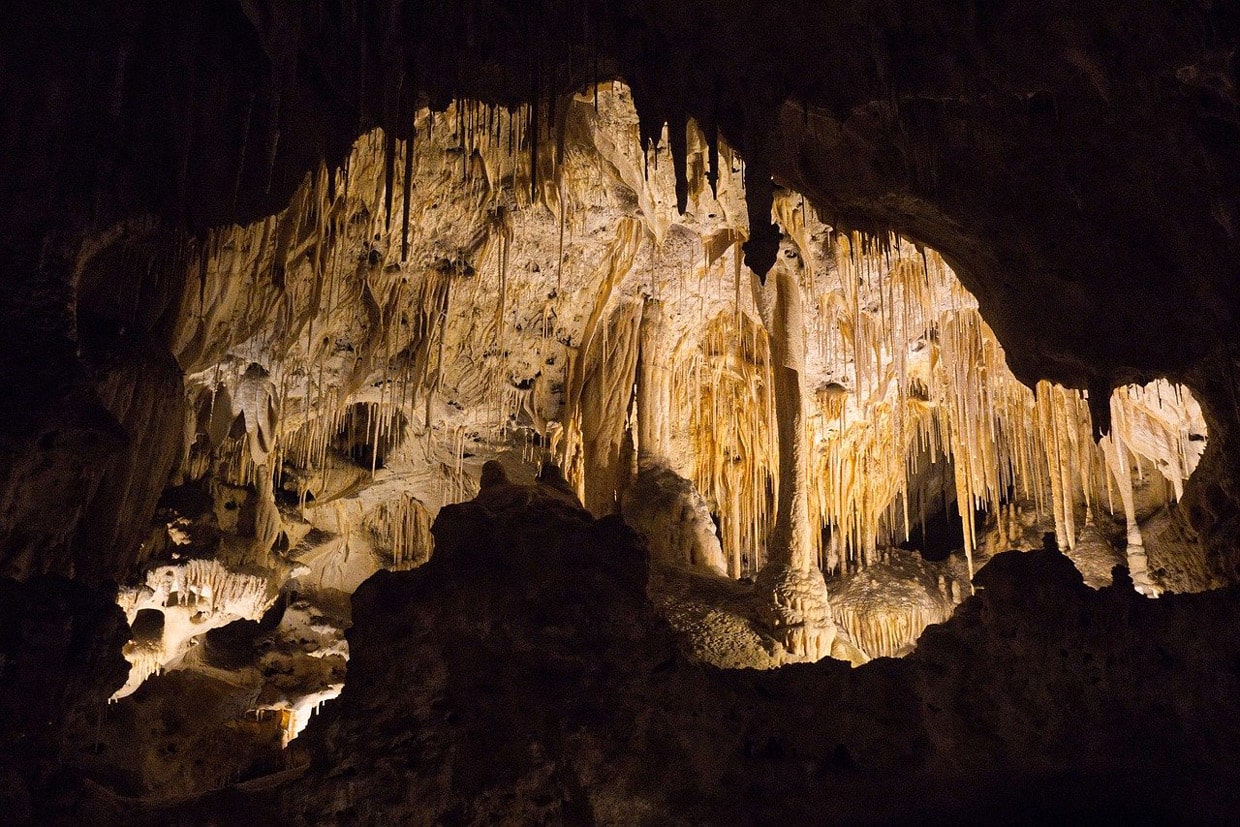 Heading to the Carlsbad Caverns, you may want to spend the night somewhere. There are no hotels inside the Center, but you can go to the nearby town, the Whites City. The closest inn is about 20 km away from the Caverns. If you want to stay in Carlsbad, you can choose from many hotels, motels, and inns. They all offer excellent facilities at fair prices. They mostly have free parking, free Wi-Fi, and excellent air conditioning.

Note that there is no campsite inside the Carlsbad Caverns area. Also, no overnight RV parking is allowed in there. Still, no worry for fans of camping; there are some public and private campgrounds in two nearby cities, Whites City (about 11 km away) and Carlsbad(about 32 km away).

Eating something good after an enjoyable day of exploration is the best! Luckily there is a restaurant and cafeteria at the Carlsbad Caverns, offering American meals for lunch, bottled, fountain, and hot drinks. More restaurants are available in two nearby cities, Whites City (about 11 km away) and Carlsbad(about 32 km away). Also, if you want Mexican food, you can find it in Whites City.

Summertime in NewMexico can be pretty boiling, and in late summer, there might be rains in the desert; therefore, many recommend traveling during spring, fall, and winter. However, the climate inside the caves does not change that much, and it is always cooler than outside (about 13°C). Conclusion: Don’t put off your summer visit if you are planning to attend one!

Traveling during the park’s off-season is not a bad idea, but there might be fewer guided tours, and you might miss the bat flights. If you want to see the bat flights, August to early October is the time for you. These bats head to Mexico when the weather starts to get a bit chilly and don’t return until May.

On the whole, September stands out as the best time to visit the Carlsbad Caverns. Not only is the area less crowded than summer, but you can still observe the bat flights. 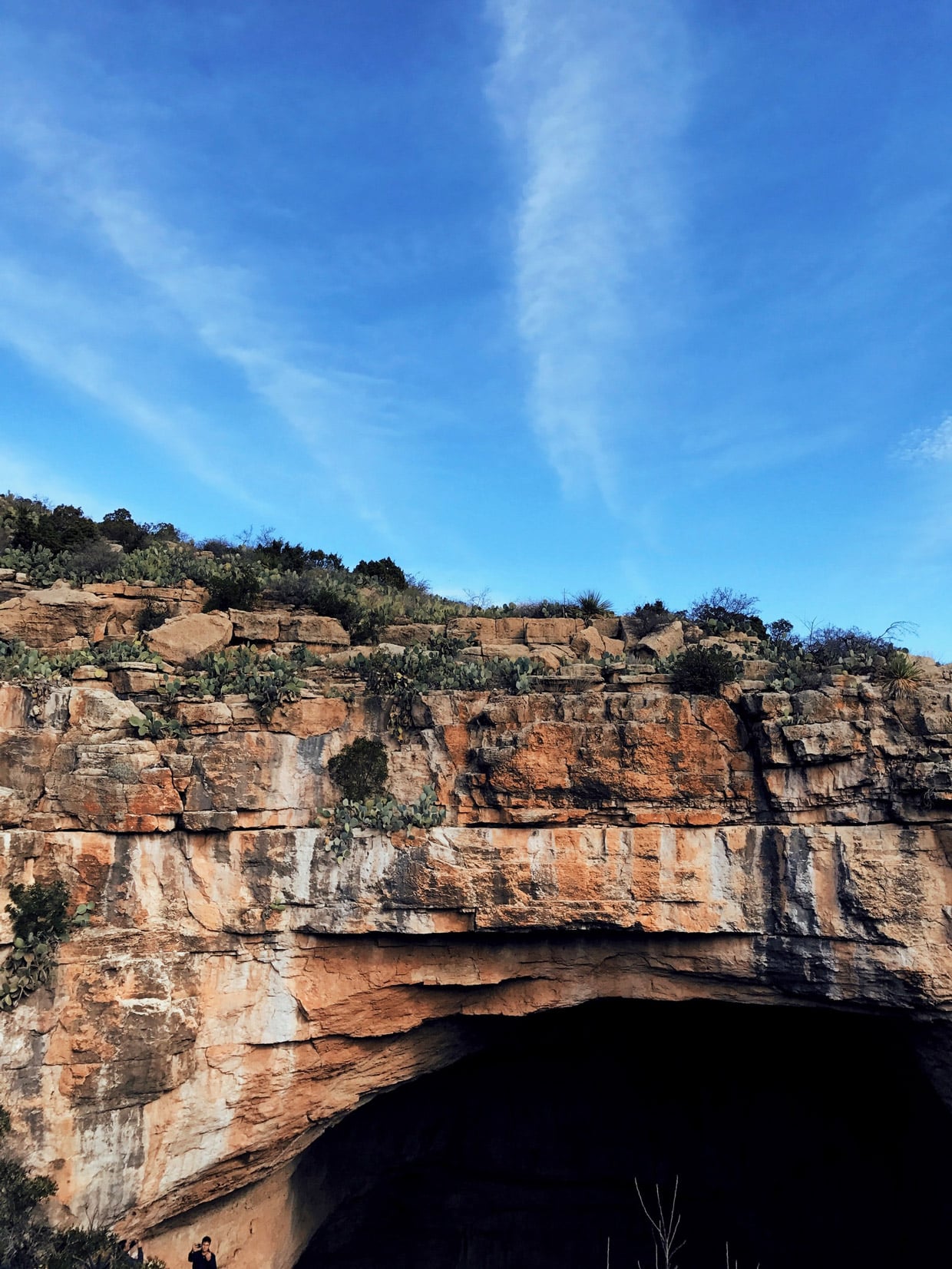 Older than 16 years old, you have to pay for an entrance ticket which is $15 for each person. Younger attendees who are younger than 15 are welcome to attend for free. Plus, If you have National Parks and Federal Recreational Lands Pass, you don’t need to pay for the tickets.

Note that you have to pay an extra fee if you want to join the ranger-led activities.

As a support for the educational program, there is also a shop available at the Visitor Center of Carlsbad Caverns. You can buy a variety of educational materials both in-person and online from the national park store. You can purchase trinkets, books, T-shirts, puzzles, mugs, toys, patches and pins, magnets, etc. Please do not buy any parts of cave formations from random sellers, even if they just collected them from private areas.