Cappadocia is a historical region in Central Anatolia, a province in Turkey. Since the late 300s BCE, the name Cappadocia came to be restricted to the inland province. The name, traditionally used in history, is used as an international tourism concept to define a region of exceptional natural wonders, particularly characterized by fairy chimneys and a unique historical and cultural heritage that is most prominent in Cappadocia, turkey.

Sedimentary rocks formed in lakes and streams and ignimbrite deposits that erupted from ancient volcanoes and Cappadocia’s rocks near Göreme eroded into hundreds of spectacular pillars and minaret-like forms. People of the villages at the heart of the Cappadocia Region carved out houses, churches, and monasteries from volcanic deposits’ soft rocks. Göreme became a monastic center in 300–1200 AD, and its open Air Museum complex in Cappadocia contains more than 30 carved-from-rock churches and chapels.

Due to its inland location and high altitude, Cappadocia has a continental climate, with hot dry summers and cold snowy winters. Rainfall is sparse, and the region is largely semi-arid. Cappadocia’s beauty is that while it is like a fairytale location in summer, it is even more beautiful in the winter. When it snows in Cappadocia, Snowcaps cover rock formations and paint the valleys white, which is truly a mesmerizing sight.

The best times to visit Cappadocia would be April to October, which is the most favorable time for the hot air balloons, with warm nights, clear skies, and cool air. If you visit from November to February, the weather is slightly more turbulent, but you have the chance to fly over snow, which would be a spectacular experience. 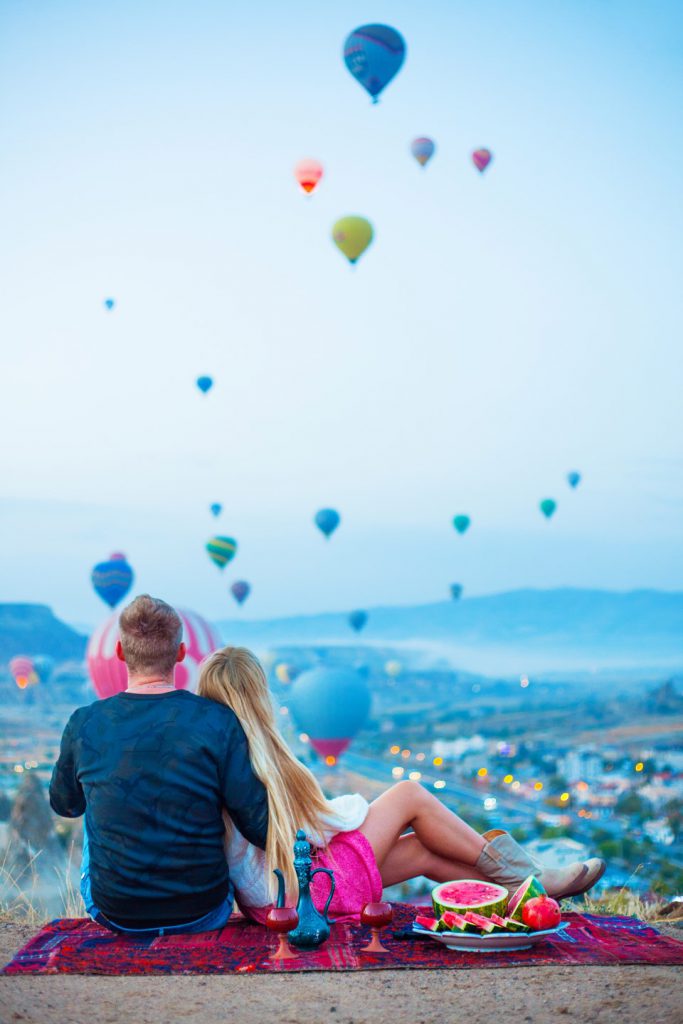 How To Get To Cappadocia

Cappadocia isn’t a town as many people think, but it is an entire region. Within this region are towns such as Goreme (the most popular tourist spot), Uchisar, Urgup, and Ortahisar. Two airports serve Cappadocia; Kayseri Airport is the main airport and takes just over an hour to reach Goreme Town and Nevsehir Kapadokya Airport, closer to Goreme, about 20-minutes. The big difference here is that Kayseri is a bigger airport, with more flight options and often has cheaper flights. From Kayseri or Nevsehir, you need to pre-book your shuttle, they will pick you up from your hotel, or they will be waiting with a sign with your name on it at the airport, and you can have a private car transfer you from the airport to your hotel.

One of the best ways to get around Cappadocia while in turkey is to hire a driver that will allow you to create a customized itinerary. That way you can visit all the spots you are interested in. To hire a private car with a driver/guide, you can book online, or if you are a bigger group, it can be cheaper to hire a van in Cappadocia, which also comes with a driver.

You can rent a mountain bike or a scooter/moped if you want to explore some attractions a bit further away or venture over to Uchisar. Renting an ATV is also a good option given the rough terrain in Cappadocia to help you explore the region’s natural wonders and rock formations. There is also a Quad-Bike Safari Tour that takes you through Sword, Love, and Rose Valley during the golden hour. 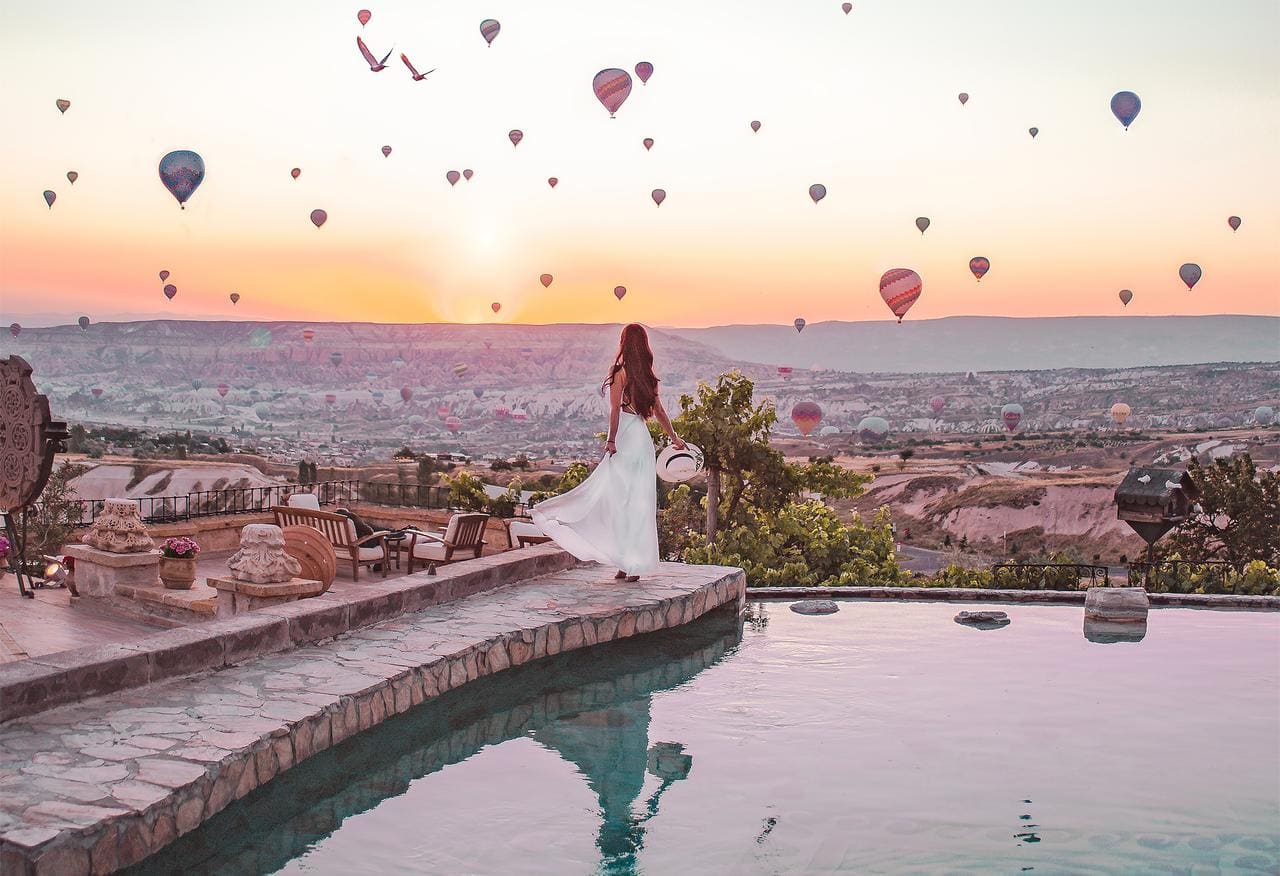 Where To Stay In Goreme, Cappadocia 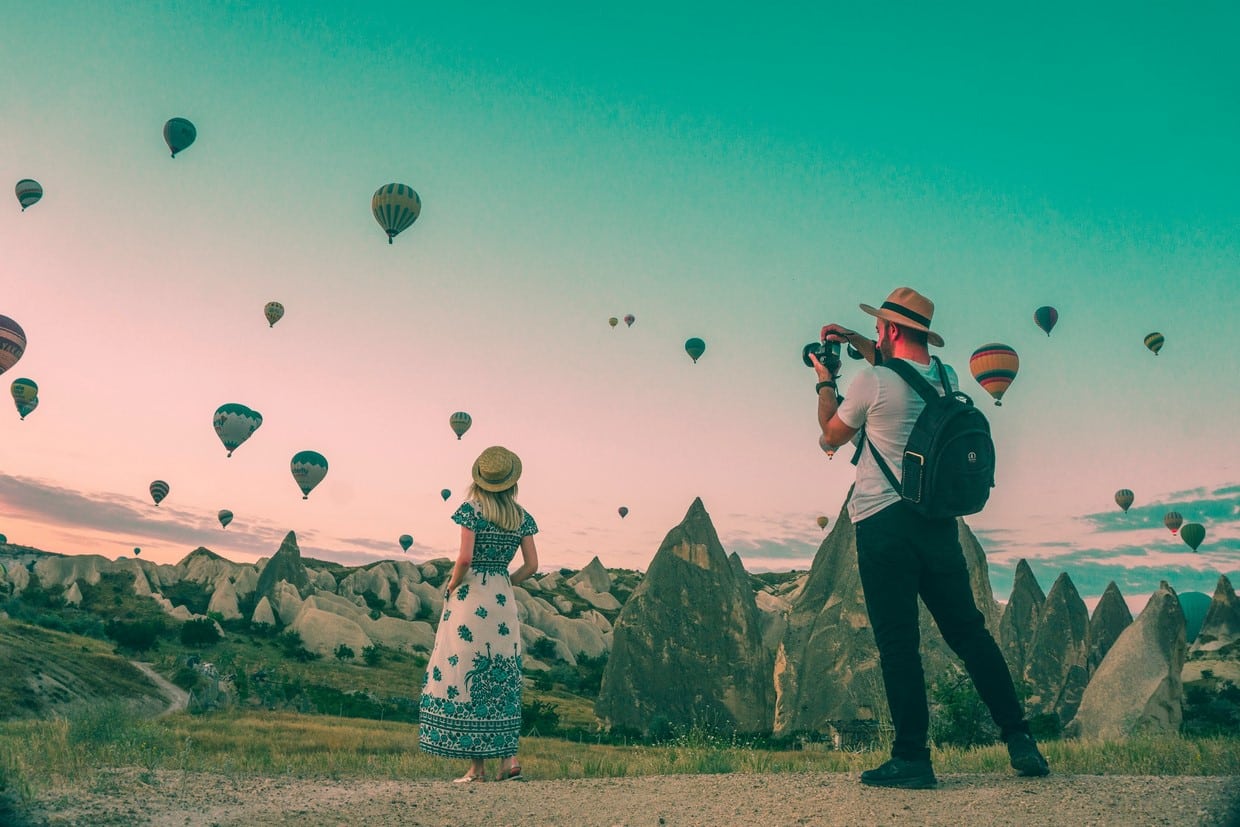 Where and what to eat

Food has always been a gateway to the heart and soul of a nation; a great way to become familiar with a city or a country’s culture. It has also been a big concern when visiting a new place because often finding places that will serve you a portion of good food. You can also have a good time being there is a trial and error process, here we have the list of top three restaurants in turkey in locations close to Cappadocia to save you from trouble.

Sakli Konak Restaurant in Uchisar is well known in Cappadocia for its amazing food and Service. While there, we would recommend you try their apricot and green salad, Manti, Sorma, and Souffleit. Take note that it is best to reserve a table in advance since the restaurant is quite small.

Kebap Yerim in Avanos is one you could enjoy while in turkey and visiting Cappadocia. Aside from the good food and a satisfying service this restaurant is close to the seaside where you can take a stroll after a good meal and make sure you try their Ali Nazik, Chicken Guvec, mixed grill kebab and last but not least, their Testi Kebap

Cappadocian Cuisine Restaurant in Goreme is a Vegetarian Friendly, with Vegan and Gluten-Free Options. This restaurant is a family-run spot where you will get a friendly service alongside a great home-cooked meal. As a traditional restaurant in Cappadocia, it is recommended to taste their traditional Cappadocian foods and especially the Lentil soup, meatballs, Turkish ravioli, and the lamb kabab pot. 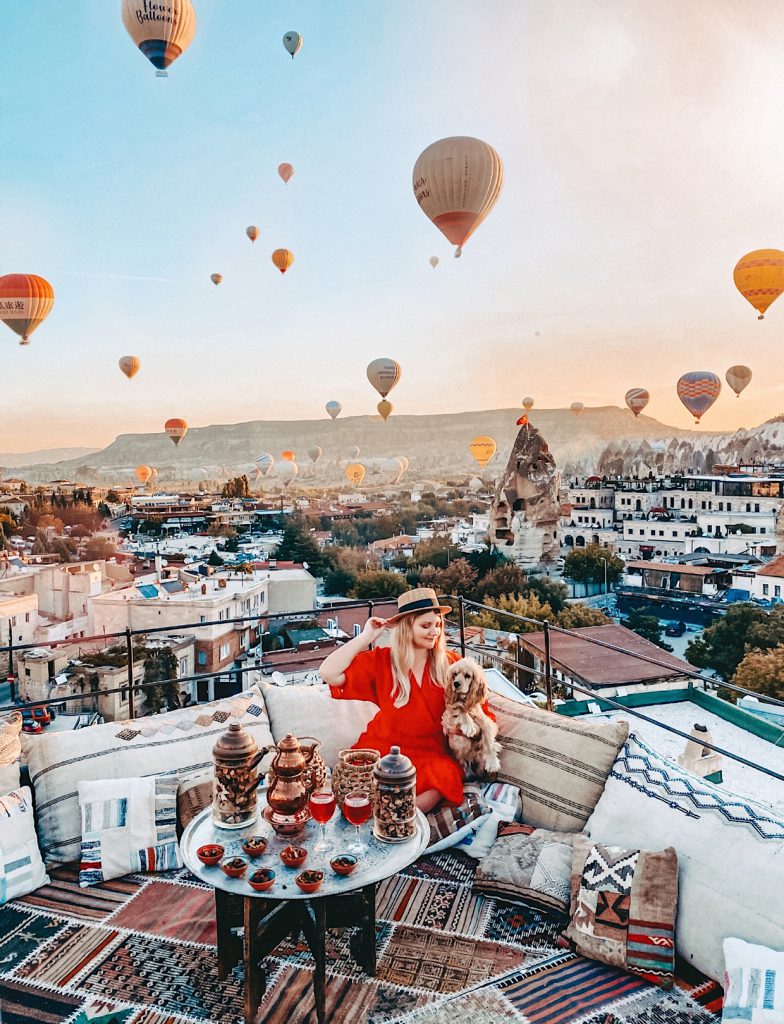 Cappadocia is a popular tourist destination, as it has many areas with unique geological, historical, and cultural features. Touristic Cappadocia includes 4 cities: Nevsehir, Kayseri, Aksaray, and Nigde. Therefore, it is important to know which locations are best to visit and what activities to partake in so that you could have the best time while in Cappadocia, turkey. Here we present you with a shortlist of these locations and activities available to you so that you can use your time wisely and get the best of what Turkey has to offer in Cappadocia. 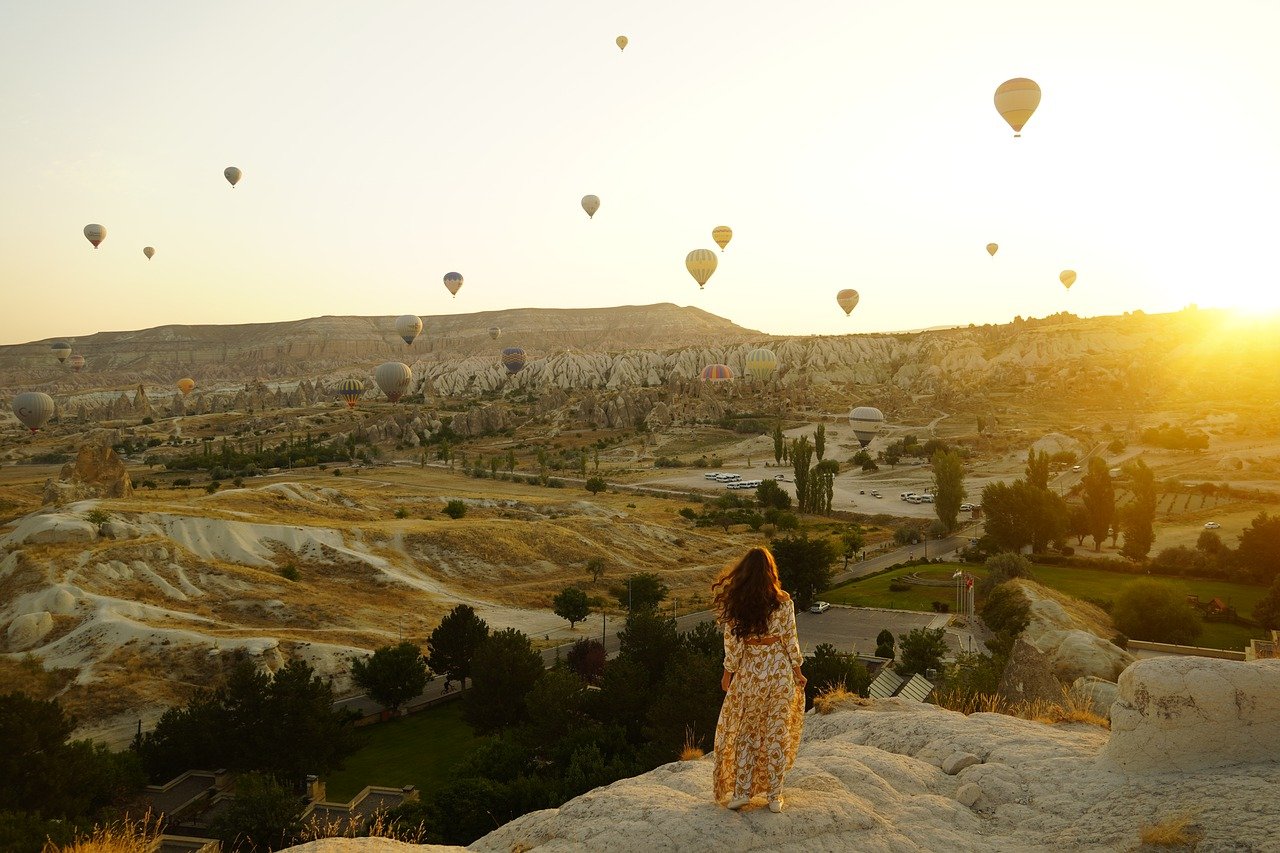 Flying In A Hot Air Balloon At Sunrise, Multi-Day Track

The Cappadocia hot air balloons are one of the most common travel bucket list items in the world. As you seamlessly float above the historic cave dwellings of Goreme Town with over 100 other balloons at sunrise, it creates a scene right out of a fairytale. Every year nearly half a million tourists enjoy hot air ballooning in Cappadocia, making this region the number one hot air balloon destination globally.

Another activity you might like in Cappadocia, If you enjoy participating in a marathon or even watching one, is a multiday track running ultramarathon of desert concept, called Runfire Cappadocia Ultramarathon, which is held annually in July since 2012. The race tours 244 km (152 miles) in six days through several places across Cappadocia, reaching out to Lake Tuz. and as well as a rewarding exercise is also a great way to see the natural beauties that make Cappadocia one of the top tourist locations in turkey. 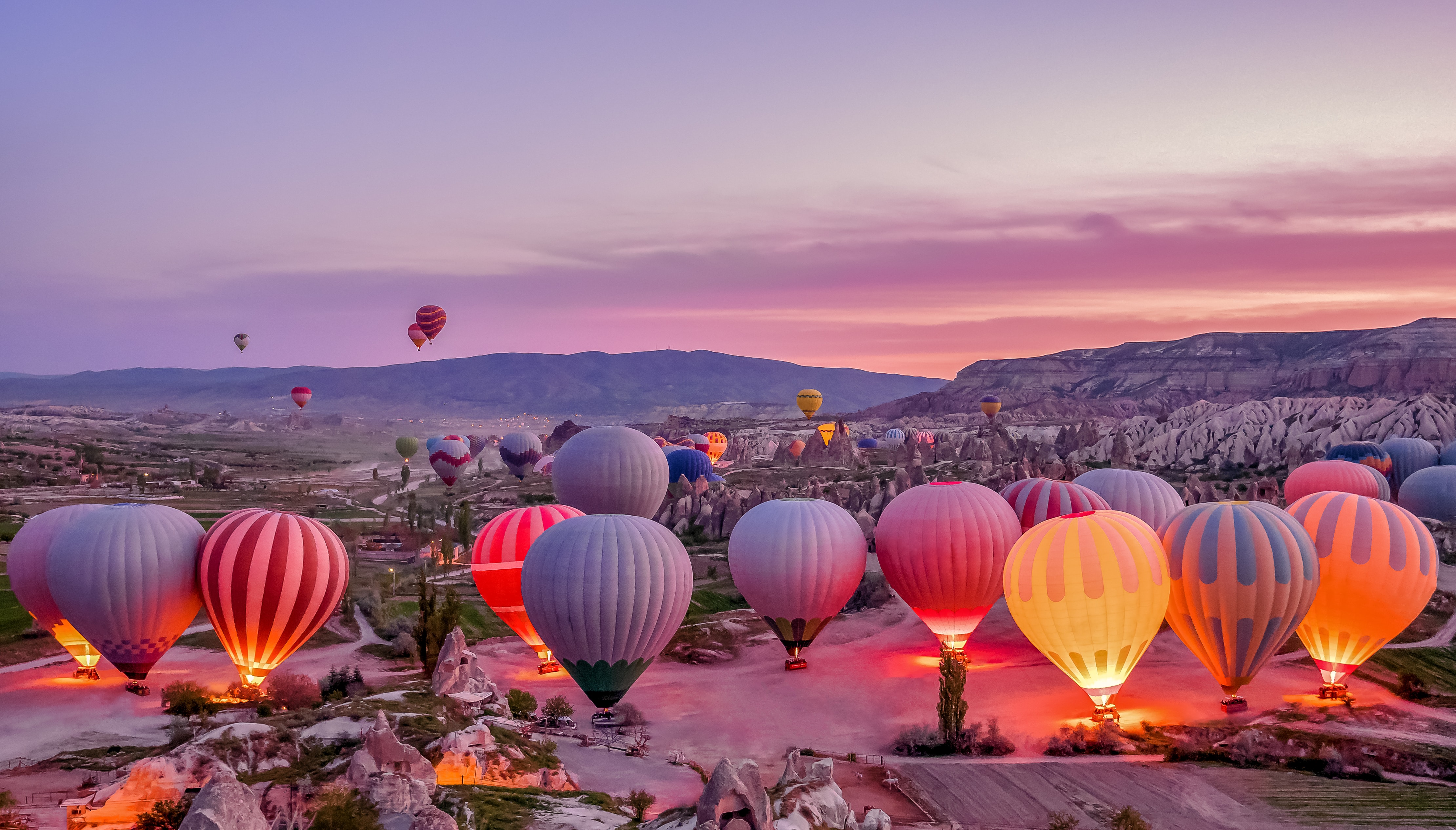 Love Valley is set just outside of Goreme, and you can hike all the way through to Uchisar Castle; it is a relatively flat, peaceful walk. It’s truly one of the unique places to visit in Cappadocia, turkey. The final section of the valley is marvelous, with waving sandstones in beautiful, stark white surroundings. You can continue walking up to Uchisar Castle at the end of the valley, as it is one of Cappadocia’s best viewpoints.

Pasabag Valley is one of Goreme’s most popular spots, Cappadocia, with its magnificent fairy chimneys and cave dwellings. The fairy chimneys truly are quite amazing. Often a rock, sits atop of the chimney, balancing its way through storms and heavy winds. You’ll find many cave dwellings among the valley, which are often double and triple stories, and you can explore each story if you wish to. 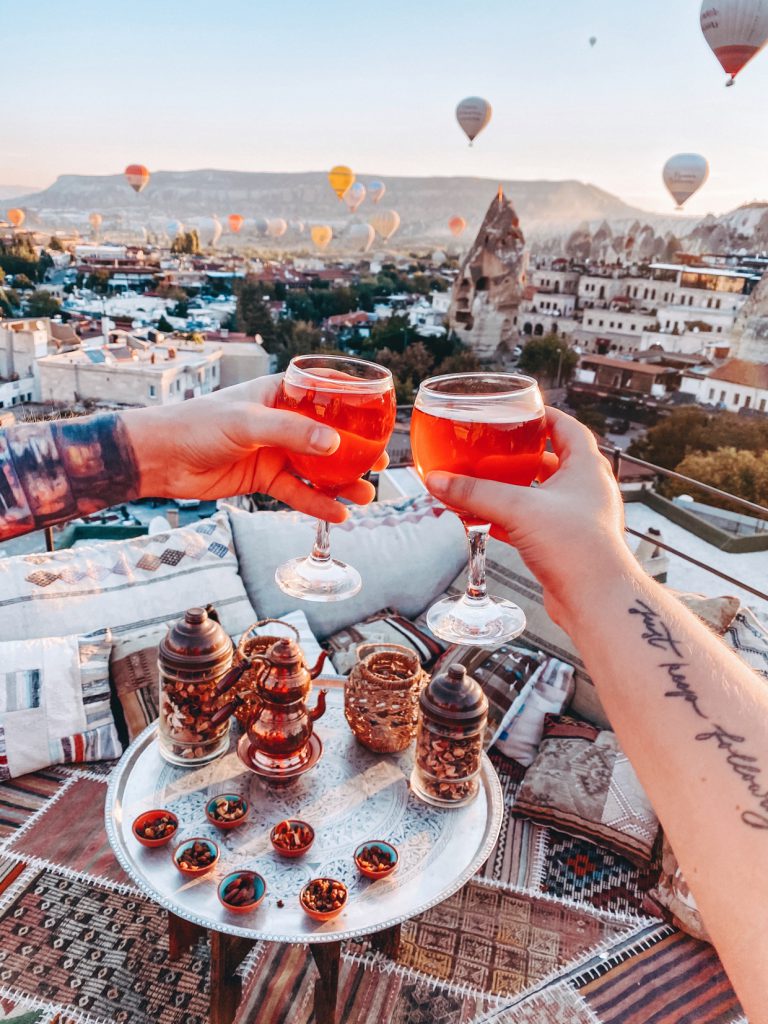 The Goreme Open-Air Museum is one of the most popular attractions and historic sites in Cappadocia with an audio-tour, guiding you through the ancient paintings, churches, and cave houses from centuries ago. The Goreme Open-Air Museum is very close to Goreme’s city center, the most popular town in Cappadocia. With more than 30 stops along the tour, the audio guide explains many of the region’s history and facts and the people who lived in Cappadocia in the cave houses.

The Zelve Open-Air Museum is an incredible site that once housed one of the largest communities in Cappadocia. In this incredible cave town, you can walk amongst historic dwellings, churches, and religious chambers, as well as the town square. There’s so much more to see in this place you can immerse yourself in the scenery and spend hours, fascinated by the history and architecture. 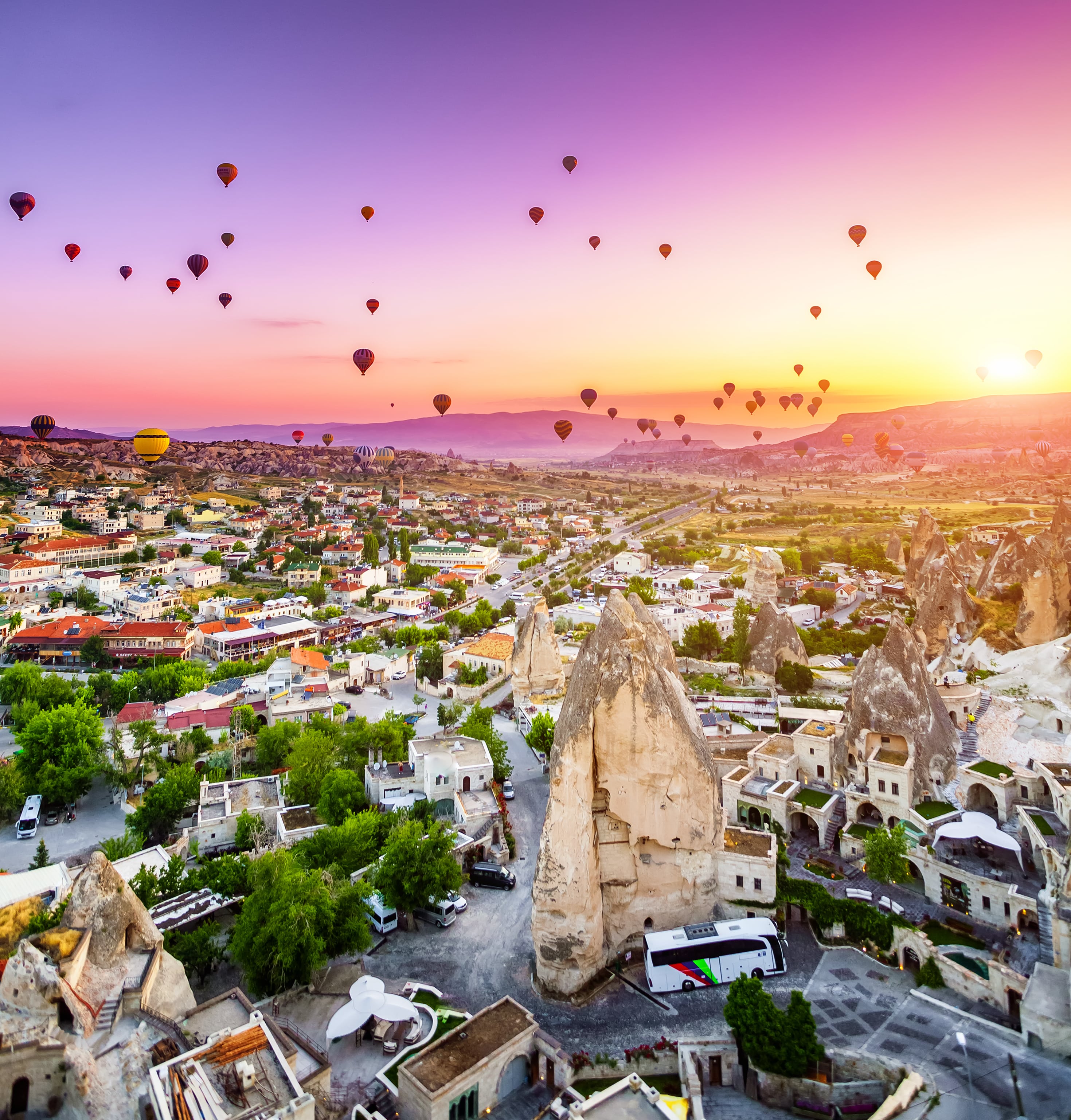 The Ihlara Valley is an incredible site with a river running down the valley for 16km within the volcanic rock. It is near the province of Aksaray, and it is considered part of the southern Cappadocia region. It’s a great spot for a relaxing hike midst beautiful and enticing greenery as well as being a hub for cave churches, of which you will find many along the trail.

Along the route, you will come across 16 churches of the 105 in the area that is open to visitors with paintings and carvings inside. Once there, the sounds of the forest as you walk beneath tree branches, climb over rocks, and stroll through the grass field openings, adorned with colorful wildflowers, is quite an enchanting experience. There’s also a waterfall you can swim in, which qualifies this valley as one of the top ten places to visit in Cappadocia. 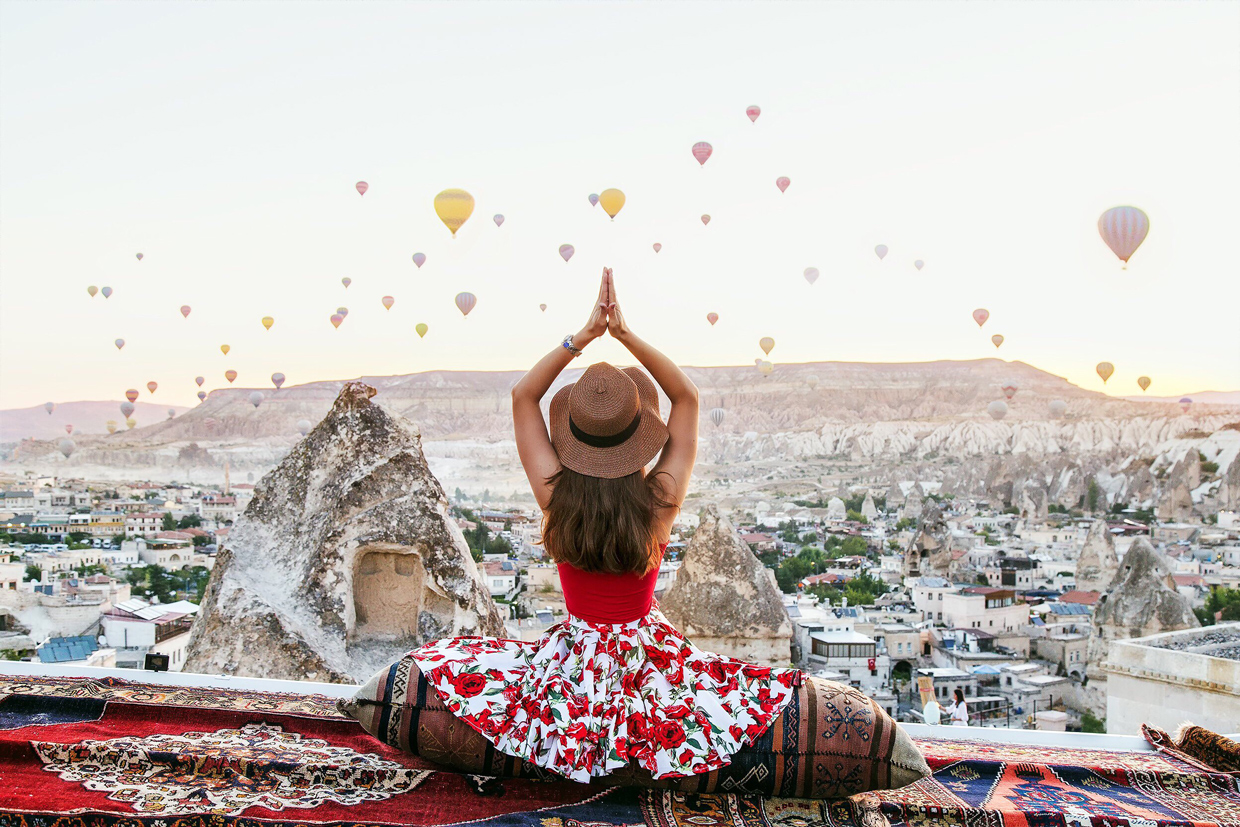 Lake Tuz is an incredible Salt Lake near Aksaray, just over an hour’s drive away from Cappadocia. The lake is most beautiful because of its vibrant pink color, and since it is not a crowded tourist spot, you can enjoy its beauty and even have a peaceful meditation by the lakeside. This spot isn’t specifically in Cappadocia but only a short drive away and well worth it.

Cavusin Castle has been built into the cliff’s side, and because of this, it’s just like an extension of the mountain, and only as you walk further towards the edge does it become more a building and less of a cliff. There are hundreds of rooms to explore, and from the top of the castle, you will have a view over Cavusin Village, Cavusin Valley, and all the way back to Cavusin Church and even Goreme.