Budva, Montenegro – All You Need To Know About

The city of Budva lies at the center of the Montenegrin coast, called Budvanska Rivijera. As one of Montenegro's most popular destinations, with an old town, bars and nightclubs, and beaches consisting of mostly small rocks, this city attracts domestic, Russian, Serbian, and other European tourists. Besides being a destination for mass tourism, it is also the hub of luxury resorts like Sveti Stefan and Miločer. Over 35 beaches are found in the area around Budva city, most consisting of rock and a little sand, eight of which are marked with blue flags.

Located on the coast of Montenegro, Budva is a well-known tourist destination. The destination is often referred to as the “Montenegrin Miami” because it is among the country’s busiest and most popular tourist areas, with beautiful beaches and vibrant nightlife.

During the summer months, there are many opportunities to enjoy the day and nightlife, including theatre, performances, concerts, and other entertainment programs.

Stari Grad (Old Town of Budva) sits on a bit of island connected to the land by a sandbar, which developed into a peninsula over time. It is surrounded by ramparts that go back to the 15th century and fortified with medieval defensive features, including city gates, gateways, defense walls, and towers.

There are narrow streets and alleys, as well as squares and temples that represent important monuments of a variety of Mediterranean cultures that shaped the development of this town. You can enter Old Town through one of five entrance doors. It is highly recommended to visit Budva Citadel in the southern part of Old Town. A reconstruction project was undertaken after the earthquake. 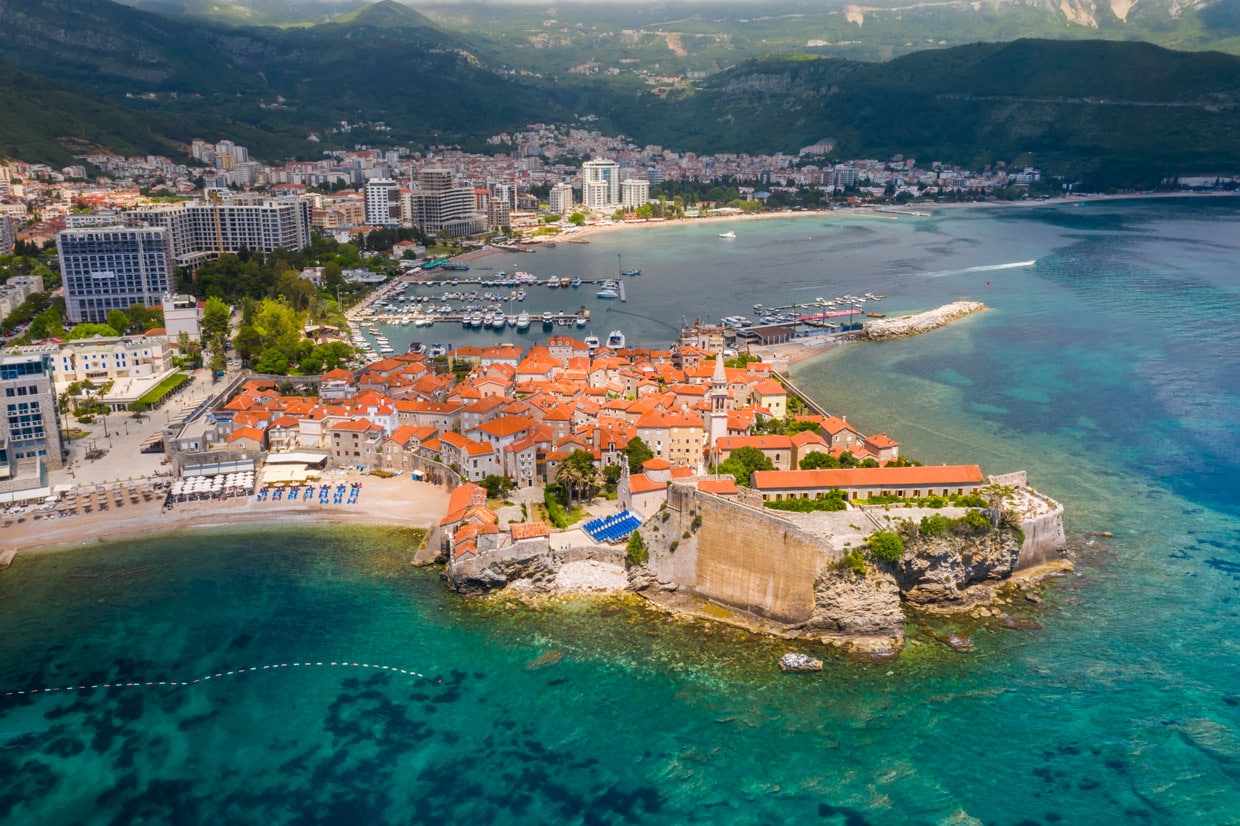 A short distance outside the old town, on your way to Mogren beach, you can view a statue of a dancing girl. The figure depicts a topless girl in a dancer’s pose (yoga). Many believe that the statue represents a young girl who drowned here, while others think that it is just an ordinary statue. Regardless, this is a good place for taking pictures with a panorama of Old Town to the back.

Near the old town citadel lies the well-known Mogren Beach. Although crowded, the water is pleasant. You don’t have to stop at the first beach stretch, now named Mogren 1, necessarily. Follow the sunbathers up the beach to the far end and then forward through the coves to Mogren 2.

The music from Mogren 1 plays so softly in the background here. If you feel particularly adventurous, proceed around the bay’s perimeter until you reach what people refer to as shark’s rock, where daredevils jump off. It is important to note that the two sides of Mogren 2 receive the afternoon shade earlier than the rest because of trees and the nearby cliff. 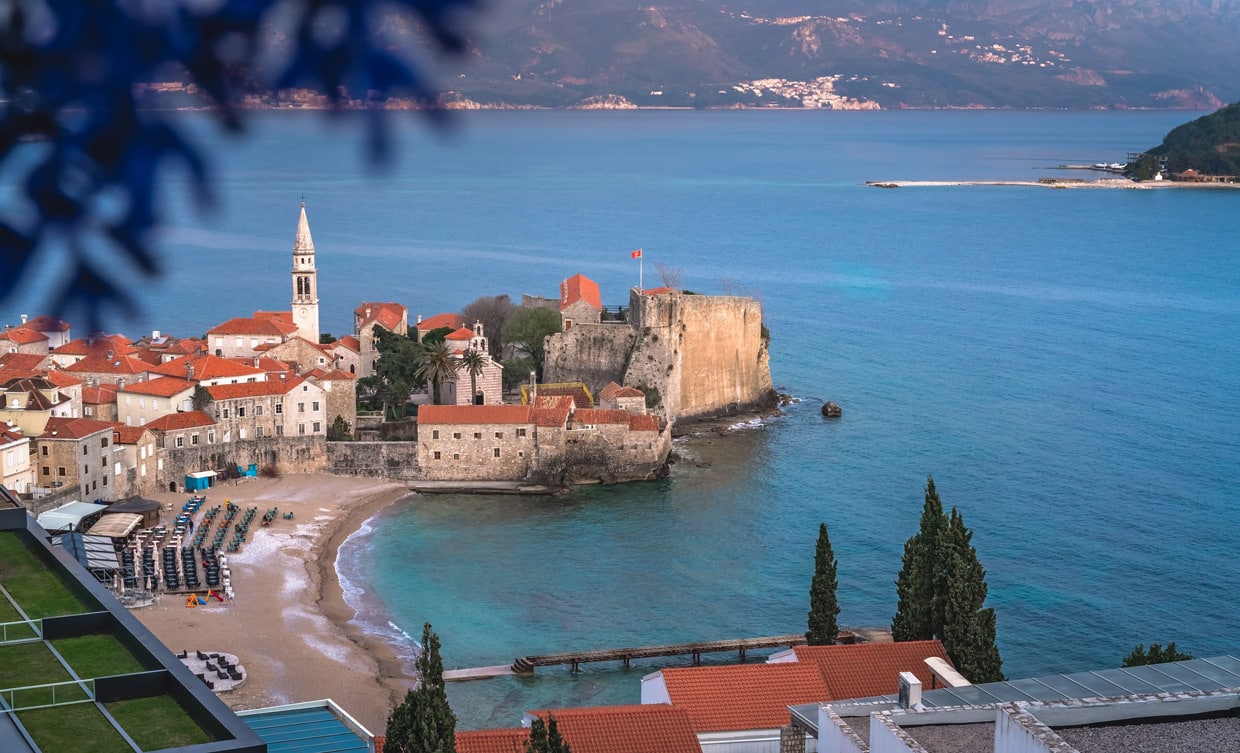 In recent years, the Island of Sveti Stefan has become known as one of the most fashionable summer resorts. The island has a sandy surface covering and is connected to the land. Such islands, which today are quite scarce, are called “tombolos”. This place was once used by a famous tribe known as the Pastrovici as a defense against enemies during the 16th century.

We can still see relics of those times in the cannon openings and the cannons present there. There are curving, narrow streets lining the interior of the town. Also located here are fascinating squares, churches, and hotels that are magnificently made in the Mediterranean style. 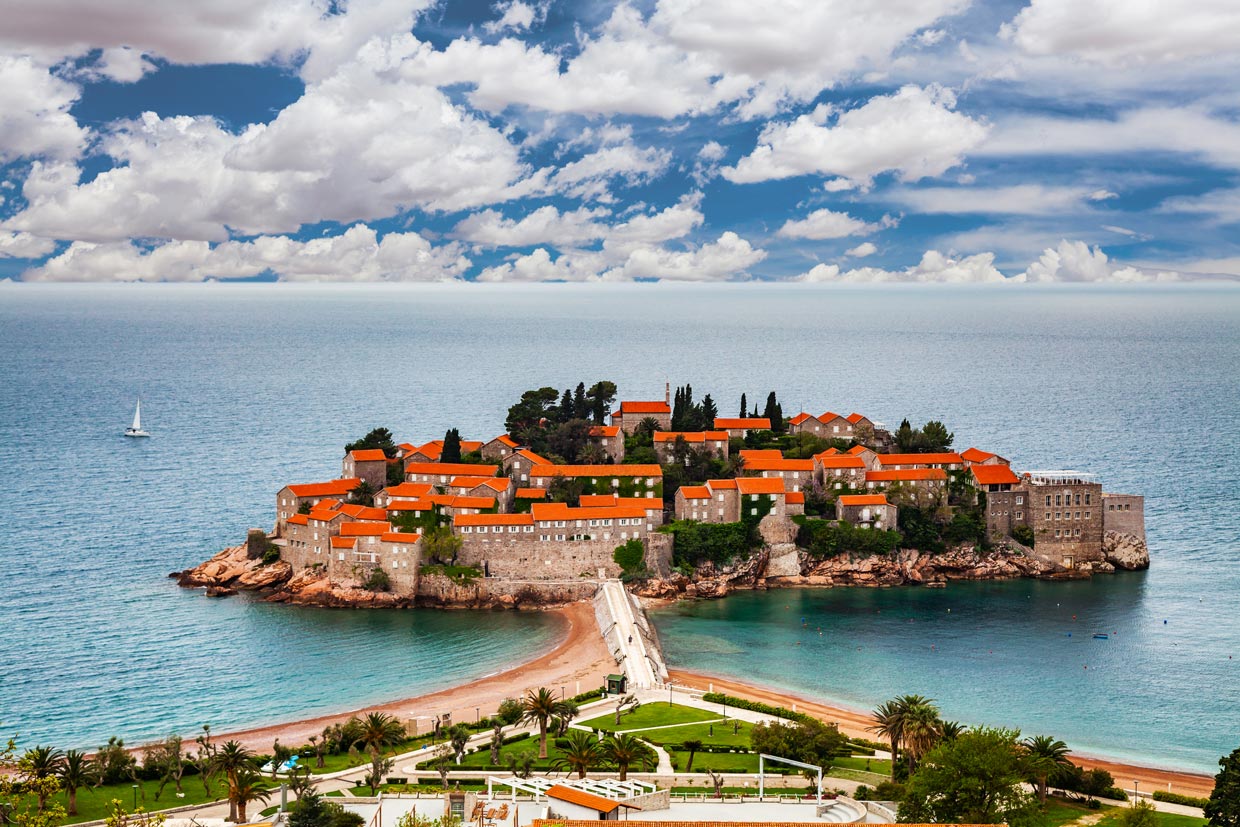 Budva has some historical churches worth visiting. The Church of Saint John was the seat of the Budva diocese until 1828. The church’s north side was enhanced with a bell tower in 1867, and it still stands. There are several monuments preserved in this area, the most important of which are the icon called “Madonna in Punta” and the extensive archives and library.

The Church of the Holy Trinity is a simple, single-nave structure capped by a dome. In 1804, the church was built to resemble one of the two churches of the Pod Ostrog monastery. The famous writer and politician Stjepan Mitrov Ljubisa is buried right in front of the church.

Church of Saint Sava is a small single-nave church. The building is said to have been constructed during the 14th century. A number of this church’s most valuable possessions disappeared during the Venetian and Austrian occupation. Almost no echoes of its old mythical imagery, frescoes, and sculptures can be found today. In contrast with the churches mentioned before, this church is not operating.

Budva is bursting with cafes, bars, and nightclubs of all kinds. On weekends and during the high season, you’ll have difficulty getting a seat. Cafes serve espresso and other coffee-based drinks, coke, juices, and other soft drinks, while bars serve alcoholic drinks like local beers and mixed drinks.

Some of the crowds move to nightclubs after 1 AM, so bars can keep playing music until 1 AM. Don’t forget to have them provide a receipt, as the law requires that they do so. Families may be offended by the open displays of almost naked girls in the streets at nightclubs, where some go-go dancers perform in order to attract customers. The action mostly takes place in the main promenade, the main street of the city. 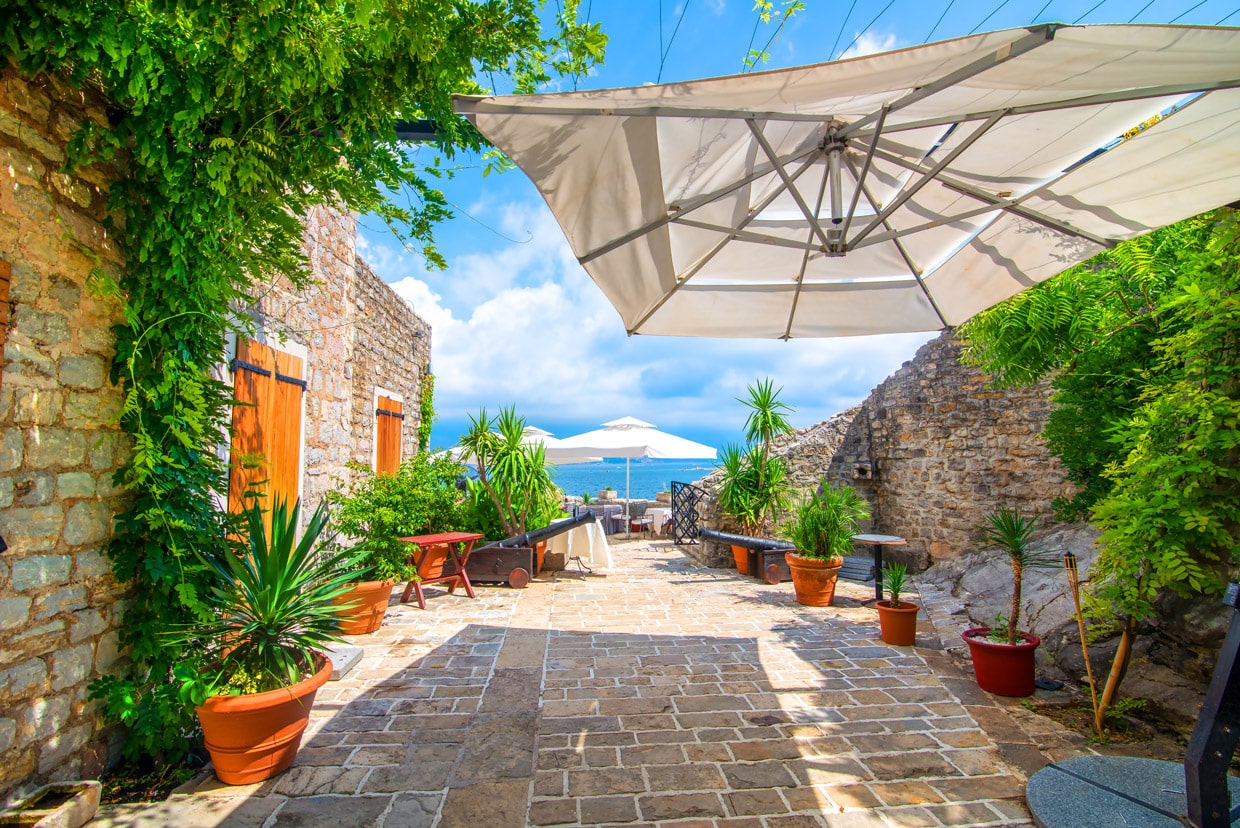 It is possible to fly to Budva city by plane. In the vicinity of this city, there are three airports. While the nearest one is Tivat Airport, being 20 kilometers away, Podgorica Airport is more distant, being 65 kilometers away. Dubrovnik Airport (DBV) is your ultimate option. Although being 80km away from Budva makes it the furthest one, it maintains regular flights to many European destinations. You can get to Budva from these airports by taxi.

A lot of cities within Montenegro and neighboring countries are well connected by bus to Budva. Buses are usually on schedule, knowing that the schedules differ from season to season and that there are more buses available in the summer. Walking to the old town from the bus station takes about 20 minutes.

Budva is also easily accessible by car since the coast road is in excellent condition and has beautiful viewpoints. Traveling from Dubrovnik to this destination can take less than two hours, depending on traffic conditions. It’s much easier and cheaper to take the ferry instead of driving around the Bay of Kotor.

Whether your car is your own or one you rented, only use it if you absolutely need to within the city. During the summer, traffic is exceptionally congested, and parking spaces are hard to find around the old town and are very expensive if you can find them at all.

Despite the abundant availability of taxis, they are not cheap in Budva. Based on the taxi company you happen to be assigned, prices may vary. Make sure you choose a cab with a rate card and a meter displayed on the dashboard. If you seek an economical way to get around the town, you might like the idea of using urban buses.

A lot of tourist boats dock in the harbor of Budva that offer trips to nearby beaches, Sv. Nikola island, or one-day trips to various places on the Montenegrin coast, although they are pretty expensive. 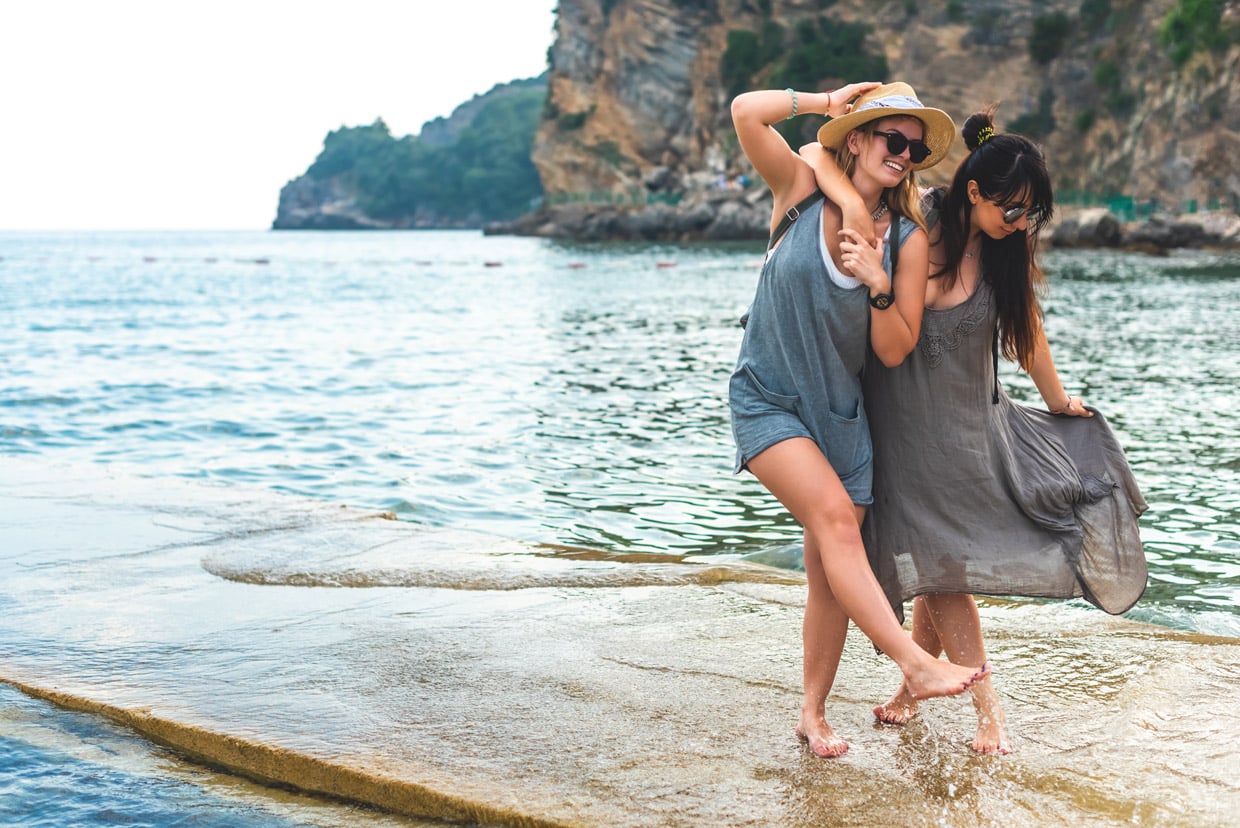 It is essential to know everything about your destination. If you are going to head to Budva in Montenegro, it would be helpful to have a look at the climate condition in this city. Here you can see the average temperature in Budva.