Bich Dong Pagoda is a three-tiered beautiful and ancient pagoda originally constructed in 1428 on the Ngu Nhac mountain in Ninh Binh, Vietnam.

Bich Dong Pagoda is part of a larger area inside the Trang An Scenic Landscape Complex in Ninh Binh listed as a UNESCO World Heritage site because of the natural elements and the rich history of the temples. What makes Bich Dong Pagoda very special is that it is one of the many mountain pagodas built inside caves. If you are in Ninh Binh, you should set aside enough time to visit these temples to enjoy both the green forests around the temple and the architecture and history of the land. (Photo by © Jean-Paul Navarro via Flickr)

The three-tier Bich Dong Pagoda in the northern region of Ninh Binh was originally built in 1428 as one Pagod in the mountains of Ngu Nhac Mountain. Years later during the 18th century, two monks by the names of Tri Kien and Tri The, decided to repair and expand the original building in order to spread the word of Buddha.

To this end, they asked for donations from other devoted followers of the Buddhist religion and began their work to build three temples in the area of the mountain known as Bich Dong. The three pagodas are called Ha (Lower), Trung (Middle), and Thuong (Upper), which are connected by stone steps from the bottom to the top.

Over the coming years of the same century, several prominent characters such as Trinh Sam came to the temples and decided to call it “Bach Ngoc Thanh Son Dong” because of the beautiful scenery before his eyes. This new name translates to “Temple made of bluestone that has the beauty of white pearl”.

The entrance is surrounded by calm waters and trees. In order to enter, first, you have to cross a bridge and walk past a gate to reach the temples. As soon as you reach the base, you feel the calm and spiritual sensation of this magical place of worship. 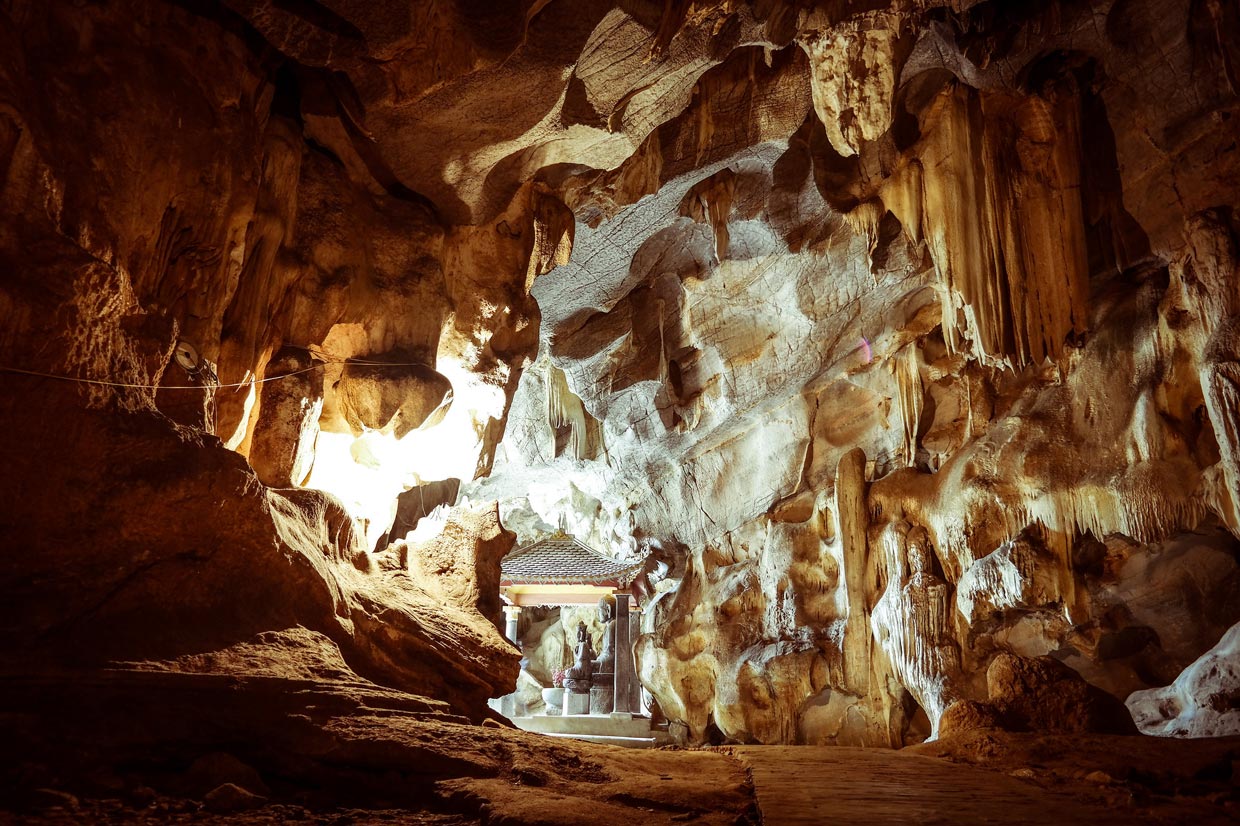 The dominant material of early 18th century Vietnam was primarily wood and stone, which can be seen in all three parts of the Bich Dong Pagoda. The pagodas are shaped like the Chinese word “Dinh” (工), having a two-story roof as well as eight other smaller roofs.

The general view of the three temples resembles “Tam” (三), another Chinese word. On the top and inside Thuong Pagoda which has two rooms, there sits a Bodhisattva. This statue looks as if it is overlooking the people and preaching to them as they live in the valley below.

Ha Pagoda is located at the foot of the mountain and behind the entrance. To enter, you should climb six steps and enter the temple building, which has five rooms and several statues in hierarchal order. The first row of these statues is the Tam The statues, resembling past, present, and future sitting on top. Below them on the second row, the Di Da Tam Ton statues are situated; and on the third row, the Avalokiteśvara Bodhisattva exists. Finally, on the fourth row, the Thich Ca So Sinh statue is located.

Apart from these statues, there are candles and incense burners, adding to the spiritual sense of Ha Pagoda. Once you exit the building, you must climb 120 stone steps to reach the middle temple of Bich Dong Pagoda.

Above the stone steps, you will see the beautiful exterior of the Trung Pagoda. Unlike the lower temple, this Pagoda is half on the front of the cave and half inside the cave. The second section of the temple holds preserved artifacts such as the remains of a bronze bell along with three statues of Amitabha Buddha, Van Thu Bodhisattva, and Thi Kinh Bodhisattva carved out of stone. Also, there are several artworks inside the two areas of Trung Pagoda, as well as calligraphy in Chines. As soon as you decide to go to the upper temple, you need to enter the Dark Cave and climb 40 stone steps to reach the Thuong Pagoda.

In Thuong Pagoda, there are two primary shrines dedicated to the Earth God and the Mountain God. There is also a very beautiful pond in this section, which is very sacred according to legends and can cure the ill.

After enjoying the magnificent architecture and catching the calm sensation of this holy place, you must also try the view. One of the most important aspects of the Bich Dong is the stunning view of Ninh Binh and the Ngu Mon fields. This spiritual journey will end with one of the most spectacular views over the amazing forests and rich environment of Vietnam. 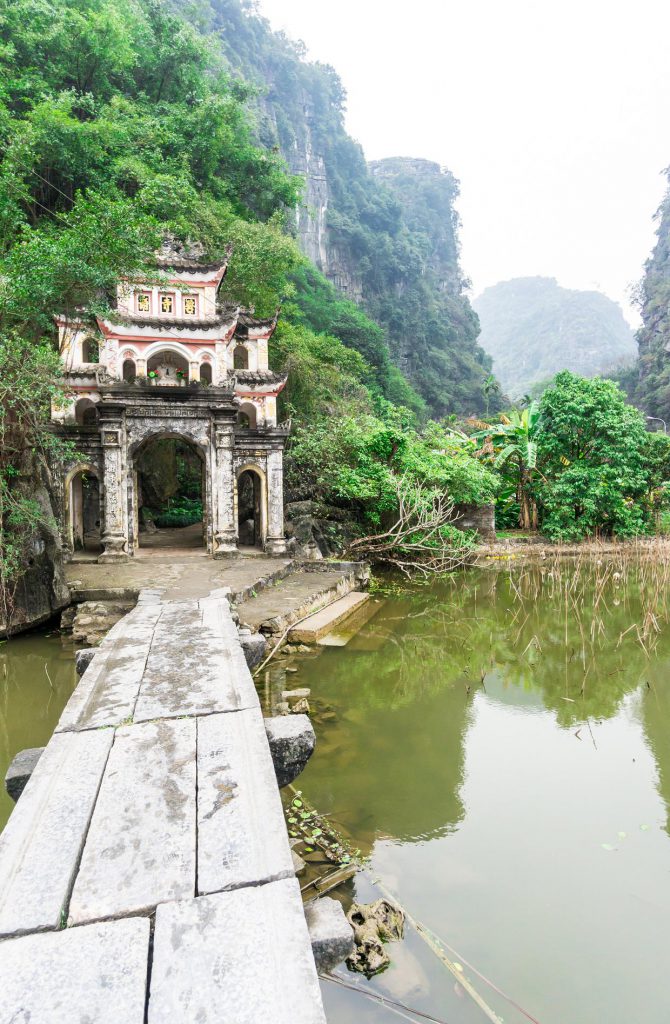 How To Get To Bich Dong Pagoda

The Tam Coc area and the Bich Dong Pagoda are accessible from both Hanoi and Ninh Binh. But the best way is to go to Ninh Binh and head to either destination from there. There are trains, buses, and motorbikes that can take you from Hanoi to Ninh Binh.

From the city, you can use public buses or hire taxies to take you to Tam Coc. After that, you can again take a cab or a motorbike ride to the Pagoda. The price for these taxies depends entirely on the starting point of the journey.

Ever since the Trang An Scenic Landscape Complex was listed as a UNESCO World Heritage site, the number of hotels and homestays began to increase. You have several options in all the nearby villages, such as Tam Coc or if you do not wish to stay in the region, you can head back to Ninh Binh.

Some of your options near the Bich Dong Pagoda and Tam Coc are: