Located in Dali, The Three Pagodas are an ensemble of three cream-colored pagodas made of brick and covered with white mud forming the corners of a triangle.

The Three Pagodas of the Chongsheng Temple are of utmost importance for Dali City. These pagodas are one of the main sites in China where you can still admire the classical Chinese architectural art. Erhai Lake and the Cangshan Mountains make a fantastic landscape over the Three Pagodas.

Dali is the ancient capital of the Kingdom of Nanzhao (8th and 9th centuries) and the Kingdom of Dali (937-1253). In the 13th century, the whole province fell under the control of the Mongols of the Yuan Dynasty. Later, Dali was also the center of the revolt of the Sultan Du Wenxiu against the Qing Dynasty. This revolt, known as Du Wenxiu Qiyi in Chinese, lasted from 1856 to 1873. Dali City is also famous for the many marbles it produces, which are used for building material or making artistic objects.

The city is today one of the main tourist areas of Yunnan, located between Kunming and Lijiang. Ramparts and four monumental gates coinciding with the four cardinal points surround the old town of Dali. Pedestrian streets lined with many jewelry, fabrics, marble, and tea stores among others crisscross the city. This old city has one of the most touristic sites in China: The Three Pagodas. 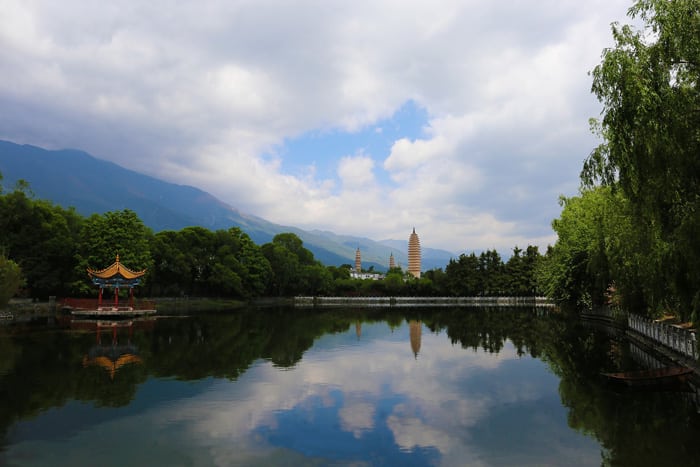 Walking out from Dali’s north gate, you eventually find an ornately painted arch with stone lions out front. This is the entrance to the reflection pool park, which boasts a superb view of the Three Pagodas. You can have an English brochure with your tickets. Tickets allow you to enter both the park and the main Three Pagodas site.

The Pagodas make a triangle with Qianxun Pagoda at a height of 70 meters. This pagoda is a witness of Tang architecture dating back over a millennium. It is extremely well preserved, but unfortunately, it’s no longer possible to climb the inner ladder. Therefore, visitors should be content to admire this magnificent monument of six floors from the outside. Approaching, you can notice the thickness of its walls.

The two other pagodas were built a century later in a style reminiscent of the Song Dynasty contrasting with Qianxun Pagoda. Measuring only 42 meters in height, they are less impressive in the landscape of Dali. Going a little further, you can find a vague resemblance to the Leaning Tower of Pisa. It is up to you to discover one of the Pagodas during your trip.

Behind the Three Pagodas of Dali, the Chongsheng Temple was built in a traditional style of Yunnan Province. It consists of three buildings and you can observe a magnificent bronze bell as well as the statue of the goddess Guanyin in its form of water. A part of the Chongsheng Temple has been transformed into a museum to introduce the history of the Three Pagodas as well as their renovation to visitors. 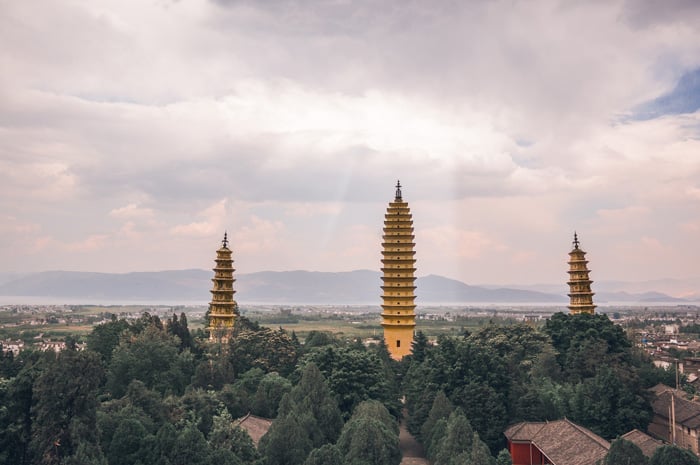 The Three Pagodas in Dali

Dali is an earthquake-prone region. Although the earthquakes have destroyed many buildings, they never destroyed The Three Pagodas but simply damaged them. During renovations in the 1970s, more than 600 remains were discovered! Some of these golden and crystal sumptuous Buddhas as well as sacred texts, etc. are exhibited in the Chongsheng Temple Museum. 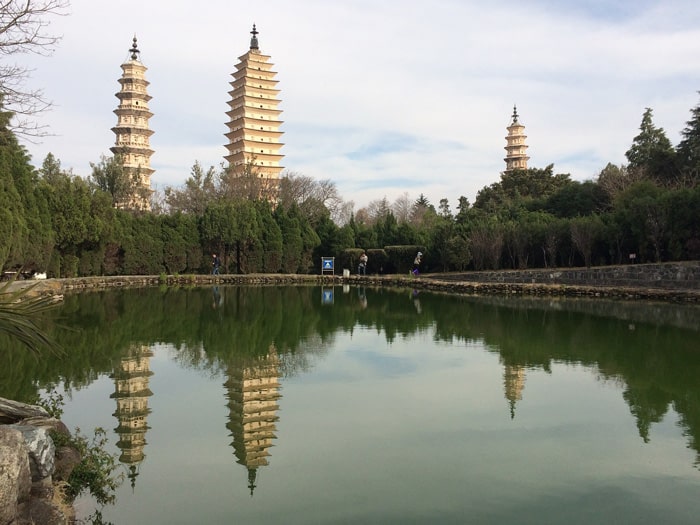 You can visit the region all year round. Despite its altitude of 1900 m, it does not snow in the winter in Dali, and the climate is very mild during the daytime (a little colder at night). Many expatriates living in China appreciate the relative tranquility and the softness of winter to spend holidays.

The rains of summer remain a few compared to other neighboring countries of Asia. If you can, opt to travel for spring and fall, apart from the first week of May and October that is a national holiday. Never miss this must-see attraction and share your experiences with us. Besides, you can leave your questions about this attraction and our professional guides will reply as soon as possible.