Located in Chaoyang District of Beijing, The Beijing Olympic Park (aka Olympic Green) is a complex constructed initially to host the Summer Olympics in 2008

The Olympic Forest Park occupies 1,680 acres in the north, 778 acres in the center, and 405 acres in the southern area with various venues also used for the 1990 Asian Games. The park was constructed to hold 10 venues, the Olympic Village, and other buildings needed for the Olympics operations. To boost Tourism, the sites were transformed into a complete multi-functional activity center for the city’s locals and visitors. (Video Credit: China Travel Guide )

Significant venues and landmarks were built in the Central Section, which is considered as the primary sector of the Olympic Park

In the northwestern corner of the Olympic Park, you can find the Olympic Village. It occupies 660,000 square meters of land, which was able to host over 16,000 athletes and coaches as well as media personnel. 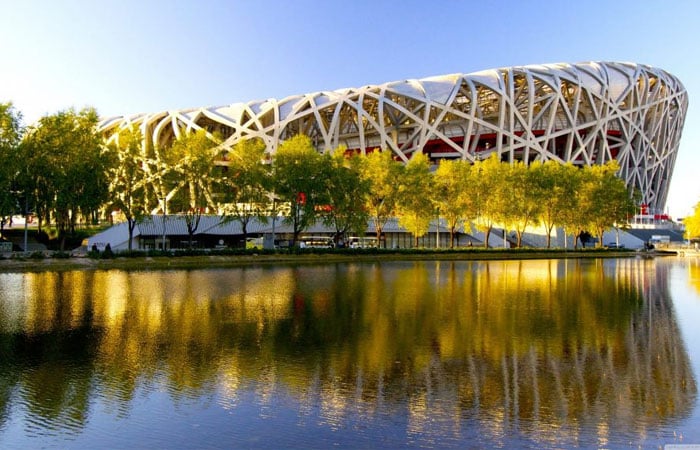 Also known to many as “Bird’s Nest”, the National Stadium was designed to be the main stadium of the 2008 Olympics. It hosted different events such as football, track and field, weight throw, and discus.

Though it became one of the famous tourist attractions in Beijing, many international and domestic sports competition are still being held in the National Stadium.

Among the architects who designed the huge stadium, Jacques Herzog and Pierre de Meuron of Switzerland, as well as Li Xinggang of China, are notable. They did not use redundant materials for the look of the stadium, instead, they exposed the steel structures of the edifice to become the stadium’s unique finish. It looks like a big nest, which houses and takes care of the people inside.

It was built from December 2003 to March 2008. Though there was a temporary suspension of the construction in July 2004 due to the design amendments, construction was resumed on Dec 27, 2004. The whole project has a gross cost of 2,267 million Chinese Yuan or 33 million dollars.

With an area of 63.6 acres, the stadium can accommodate a total of 91,000 seats (80,000 fixed and 11,000 temporaries). Its top portion has a semi-transparent air bubble film cover in which, enough sunshine can pass.

The stadium is built to address the needs of all the spectators. Stands can be adjusted to cater to the audience’s preferences. Besides, seats were distributed evenly and there are no visual obstructions wherever the spectator is seated. Broadcasts can also be heard by everyone clearly since it adopted the electro-acoustic public-address system. It also owns 200 wheelchair seats for the disabled.

A gathering called Happy Snow and Ice Festival is held in the stadium every December to February of the following year. It started after the 2008 Olympics and turned the Bird’ Nest into the biggest ski resort in the city of Beijing.

More than 30 kinds of sports and recreational activities are available to the public including ski jumping, bumper car on ice, ice skating, and even biathlon (cross-country skiing and rifle shooting). There are also indoor activities that the children can enjoy such as fencing, canoeing, and equestrianism. 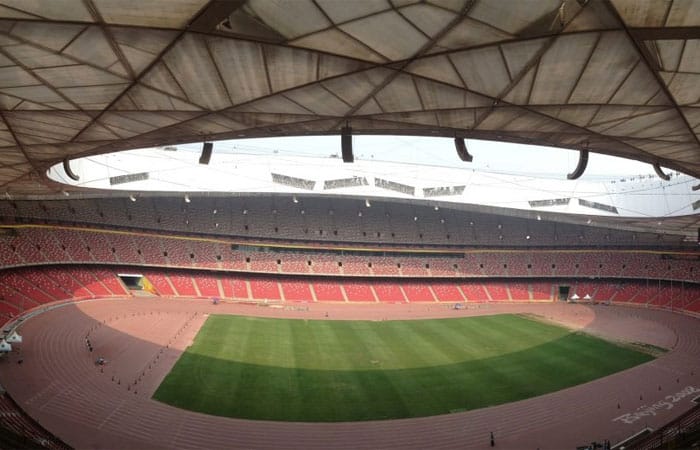 When the Water Cube was designed, the architects tried to combine modern technologies with Chinese traditional values. They used the old Chinese concept of having a square Earth and round heaven incorporating the cube shape of the ancient urban buildings.

It is the first structure in the world that was constructed based on the “soap bubble” theory. It also has a polyhedral steel-framed body.

It got its nickname “Water Cube” since it looks like a big blue box. Designers chose blue as its color for the building to reflect sunlight. During the day, the Water Cube shines like a pearl in water.

Olympic Games That Were Held Here

The Olympic Games, which were held here are swimming, synchronized swimming, and diving competitions. Post-games uses are for leisure activities, health-building services, and the international center for swimming.

Inside The Water Cube Complex

It is a themed indoor water park that was opened to the public on August 8, 2010. It has different water rides that the crowd can try like Wave Pool, Lazy River, Tornado Rides, and Kid’s Pool.

Built on the 4th floor of the Water Cube, the theater can cater to 150 audiences. Tourists can watch 3D as well as HD laser films that are shown here.

A place where you can relax and experience advanced SPA services and facilities.

There are different places where you can eat and dine. There are even water-themed restaurants that offer gourmet meals.

This is where tourists can buy their souvenirs. 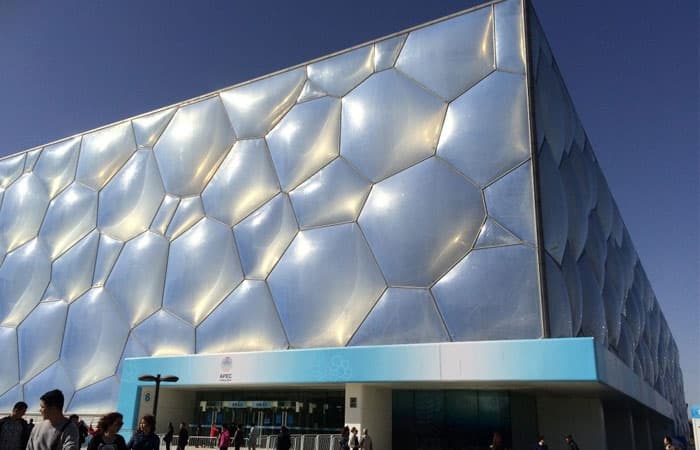 This is where the International Broadcast Center (IBC), Main Press Center (MPC), and Fencing Hall are located. The IBC can cater to 16,000 journalists while the MPC can hold 1,000 reporters and photographers.

Adjacent to the Bird’s Nest and the Water Cube, the indoor stadium has a seating capacity of 20,000. Its roof is designed wavy, which got the idea from a traditional Chinese folding fan.

The Olympic Games that were held here are trampoline, artistic gymnastics and handball finals.

The museum was initially opened in 1988 as the first and only state-level complete science and technology museum in China. An exhibition building was added in 2009 and since then, the museum is consists of four floors. It is located in the central part of the Olympic Park, north of the National Stadium.

It offers different science and technology ideas and concepts that focus on various fields such as aerospace, transport, energy, environment, etc. The activities in the museum are diverse and dynamic, which enables visitors to understand and appreciate the theories and applications of science and technology more.

This portion of the museum is suitable for children since it offers hands-on activities. It is designed for children aged 3 to 8 years old, giving them fun ways to learn Science. It has 7 exhibitions with different themes such as Happy Farm, Science Castle, Exploring Mountains, Cheerful Water Bay, Safety Island, Hands-on Activities, and Performance Scene.

The glory of China Hall

In this hall, important Science and Technology discoveries and findings of ancient China are shown. It has five sections. The first one, Introduction Hall, is where the guests can learn about ancient China. The next two are the main exhibitions in the hall. In Taosi Observatory, bronze embossments are showcased. On the other hand, in the Technological Innovation of Ancient China, you can find significant inventions in architecture, mining, agriculture, and others. Other exhibitions are Scientific Exploration of Ancient China, Exchange between China and the World Civilization, and Hands-On Space.

This portion of the museum is where the history and development of human civilization are exhibited. The scientific exploration in many areas is displayed and explained in this section of the hall too. Some of the exhibition halls are the Miraculous Universe, Mysterious Life, Rhyme of Sound, and Brilliance of Light.

The sci-Tech effects of different fields such as agriculture, housing, health, and transportation are shown here. Its six sections such as Healthy Life, Household, and Source of Daily Life, depict how science and technology make the lives of the people easier and faster.

This section is focused on the critical issues and problems that the human race is facing. It provides insight into the future but also stresses the issues and effects of technological development.

Equipped with 3 groups of movable seats, the Motion Theater can hold 60 visitors. The seats move to be in motion with the film.

Dome Theater has a capacity for 442 visitors with specific seats for the disabled. This is where done planetarium shows are held.

Huge-screen Theater can hold 632 visitors. It is one of the most advanced theaters in the world.

4D Theater is where 4D special-effects are showcased so that the audience can feel how it is to be part of the scene.

The Northern Section of the Beijing Olympic Park

This section is considered the terminal point of the central axis of Beijing. It is composed of two gardens, the Southern Garden and the Northern Garden. The first one has a grand man-made landscape of Aohai Sea and Yangshan Mountain. It was designed using traditional technologies to come up with a classical garden. On the other hand, the Northern Garden has a wide array of vegetation. There is an expressway over the Fifth Ring Road, which serves as an ecological gateway to the two districts.

On the south gate of the park, you can find the Sightseeing Tower, the 6th tallest sightseeing tower in China. It has five towers that are constructed using steel as frameworks and were arranged to depict the pattern of the five Olympic rings. Its tallest tower is 810 feet height. It is also known as Giant Nails because the rings look like nails from afar.

The Southern Section of the Beijing Olympic Park

All the venues in the former National Olympics Sports Center are used for the 1990 Asian Games. It has a stadium, gymnasium, and Yingdong Natatorium.

It is a huge culture base park wherein, introduction to the culture, song and dance performances, old housing, and various artworks are combined and showcased. The Chinese Ethnic Culture Park also offers an opportunity for visitors to taste the flavored cooking of China’s 56 ethnic groups.

The park/museum has already exhibited displays for over 40 ethnic groups. Examples are the cave-house with three courtyards of the Han People and Tibetan-style singing and dancing ceremonies.

In the park, you can find the big banyan tree, which symbolizes the banding of the 56 ethnic groups together. Another scenic spot in the park is the Ethnic Bridge, which is inspired by the architectural styles of Tibetan as well as Bai and Dong people. There is also a fall called the Tenggeli Waterfall, the largest artificial waterfall in China.

The Water-Splashing Festival of the Dai People, the Knife-Pole Festival of the Lisu People, and the Mongolian’s Nadam Fair are some of the ethnic groups’ festivals, which are held in the Chinese Ethnic Culture Park.

An interesting point about the Beijing National Stadium is that in this construction, over 36 km of unwrapped steel with the 49,600 tons weight have been used, which is a shocking fact! Have you ever visited the Olympic parks in the world? Feel free to share your experience and thoughts with us. Besides, if you need more detailed information, make sure to leave your questions and our professional guides will reply as soon as possible.