Aspendos Theatre is the best-preserved theatre of antiquity in Aspendos, a city near Antalya in Turkey dating back to the Roman emperor Marcus Aurelius's reign.
In This Article
History and Myths
Architecture and Structure
Aspendos Theatre Today
How do I get to Aspendos?
What to do in Aspendos theatre?
How much does it cost?
What do I need to visit?
Have you ever been there?

Don’t you get bored hanging all the time in the modern city of Antalya, Turkey? We want to invite you to an adventure just 25 miles (47 km) away into the ancient worlds of mystery. It truly is a Turkish time machine for traveling to the ancient world of performance art. In Southern Turkey lies the ancient region of Pamphylia, holding the old city of Aspendos. Being in the riverside of the Eurymedon and rich with resources, the city of Aspendos always has been a prominent jewel for the kingdom ring of so many Greek, Persian and Roman kings. This city well preserved some ancient structures for us, including Nymphaeum, Basilica, and Agora, but among these, all the Aspendos theatre has a special place of being the best-protected ancient theatre, like a tunnel inviting you for a time travel to ancient times.

Aspendos theatre was designed by Zenon, son of Theodorus, and was built under the command of the Roman emperor Marcus Aurelius in 155 AD. We know these all from the precise inscriptions on the walls. We also apprehend that Zenon was funded by two wealthy brothers, A.Curtius Crispinus Arruntianus and A.Curtius Crispinus, who actually gifted the theatre the Gods of the country and to the Imperial house. It has been said that there was a competition for building this theatre for the reward of getting married to the daughter of the ruler of the city that finally resulted in a marriage held in the theatre, as the ruler was amazed by the sound system bringing Zenon’s voice from far away whispering that “Your daughter must be mine.”

Although this theatre was built under the region of a Roman emperor, it actually has many Greek characteristics. For example, according to the Greek tradition, the spectator tribune is revealed in the eastern lean of the acropolis or the stage, back wall, and flanking towers are erected from a scheme of stone-built arcades and domes. The horseshoe shape of the auditorium is also a Greek idea. Anyway, you can also observe some roman ideas too, like barrel-vaulted substructure.

The diaphanous scale of the Aspendos theatre is imposing. The theatre is 315 feet (96 meters) wide, with other components following generic divisions: the width of the stage is half the width of the theatre’s wholesome and double the diameter of the orchestra. The stage building was adorned from the inside by a two-tiered frontispiece that still sustains its initial height, and from the outside maintains 17 windows divided into two levels.

Meanwhile, a horizontal walkway called Diazoma divided the spectator tribune into two parts. The upper part contains 21 rows of seats, as long as the lower section has 20 rows. It has been estimated that Aspendos theatre could accommodate at least 7300 to 7600 people. But it could contain up to 8500 spectators if the stairs were used as places to sit on.

The theatre is also famous for its exceptional acoustics and exquisite architectural adornment. In particular, the building on the stage with two floors is striking and luckily has been preserved in a superior manner. This is high because of the city’s ceaseless domicile through to the Byzantine and Seljuk periods as each of them used it in a different creative way. For example, the Seljuks had used the theatre as a caravanserai, a summer residence of sultans, and re-established the construction in the 13th century with a buttress and a portal. 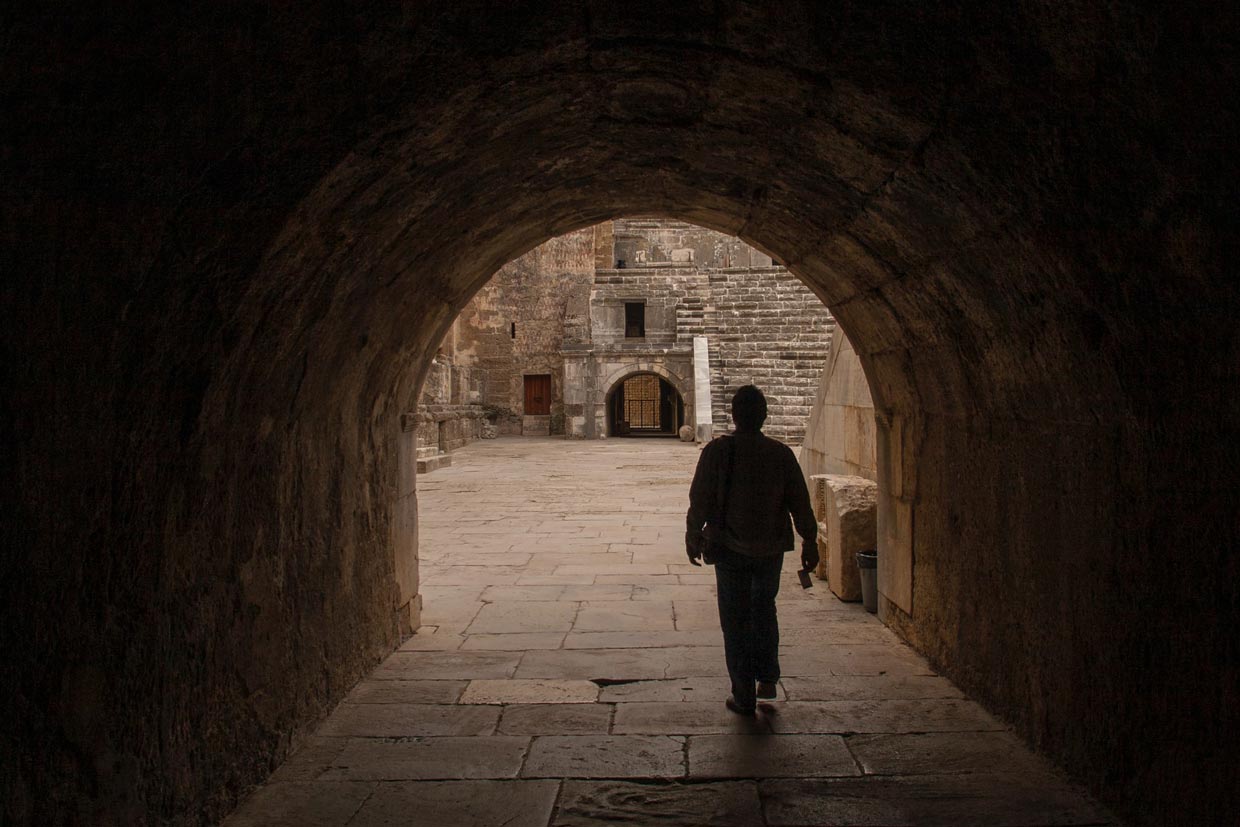 Remember calling Aspendos theatre a time machine in Turkey for wandering through performative arts during ancient times? The theatre is still being used for its original purpose. Since 1994, the Aspendos theatre hosts the Aspendos International Opera and Ballet Festival annually (TR. Aspendos Uluslararası Opera ve Bale Festival). It is a locale for various cultural events, which thousands of people attend to enjoy the performances and events—just like the way people did 2000 years ago. You still have the chance to enjoy the spectacle of it. 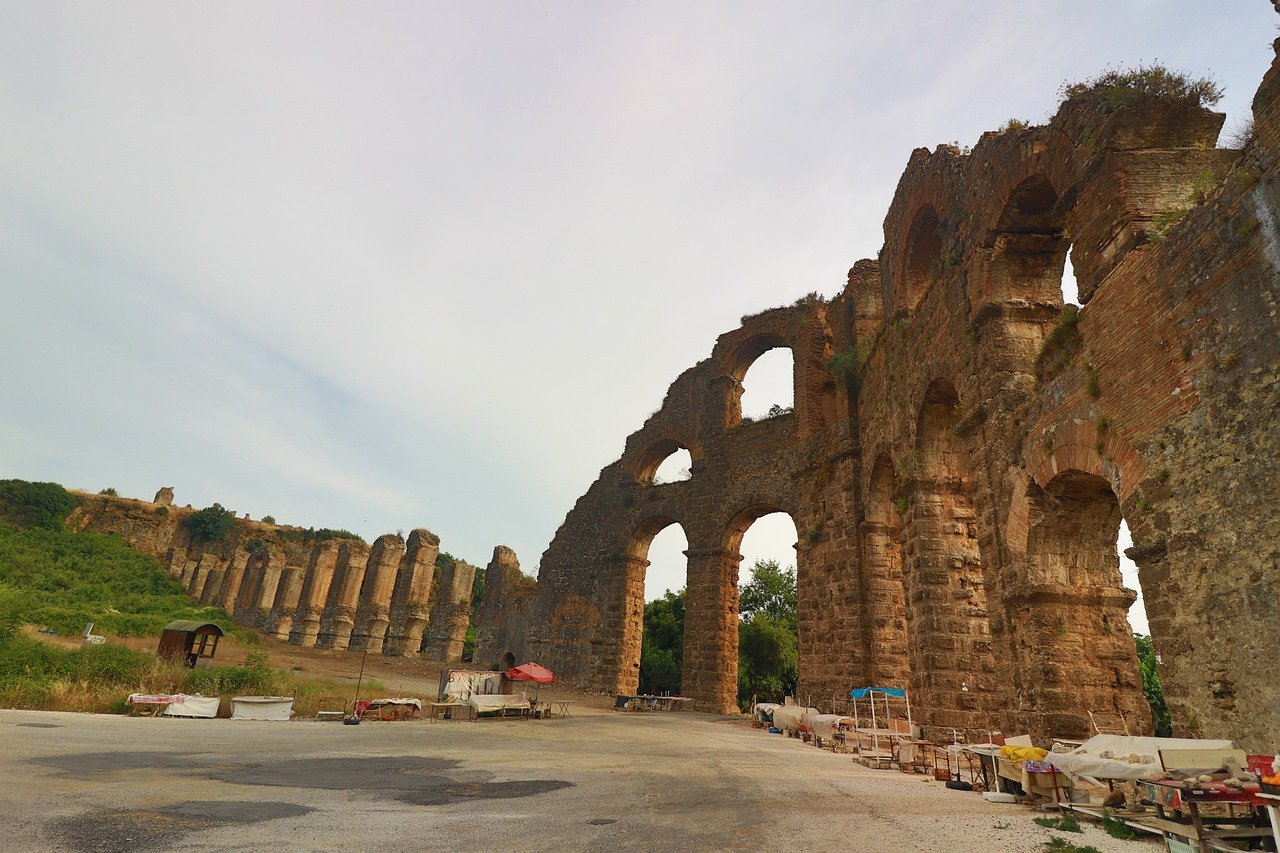 How do I get to Aspendos?

There are many ways to get to the Aspendos, and the most common way is to get there from Antalya. The cheapest way is to catch a bus via Serik, and the cost is about 45 TRK (5.79 USD). be ready for a one-hour bus trip. If you like to get to Aspendos faster, taking a taxi would be the best option with the average cost of 240 TRK to 290 TRK  (30 to 38 USD). You can get there in 35 minutes by taxi. 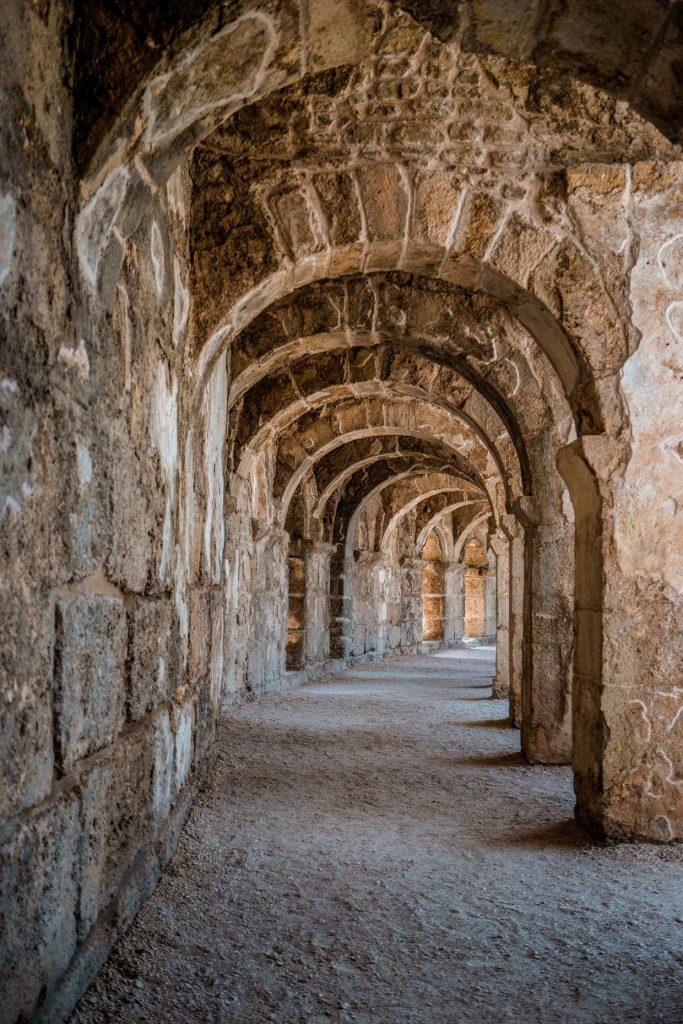 What to do in Aspendos theatre?

Visiting an ancient site is not a complicated thing to do, but everybody wants to have his/her own way of visiting. So don’t make it a big deal and visit in your manner. It is recommended to read about this place’s history to get closer to the building’s background. It can make your experience more joyful and meaningful. Without accurate information about the place, you may find it just a big monument!

Aspendos Theatre and ruins are located near some other tourist attractions, and visitors like to have a glimpse of them. Fishing places, boat tours, off-road tours, and Golf courses are the most popular things near Aspendos Theatre. To fully enjoy your trip, you can pick one of them to spend some hours in Aspendos.

How much does it cost?

The cost of your trip from Antalya or any other place to Aspendos is dependent on the way you want to spend your money, but the Aspendos ruins and theatre also need tickets, and the entrance fee is about 70 Dollars per person. Another option is attending local tours, which are available for tourists and provide you with all information and guides.

E-booking tickets for the theatre is also a good way to avoid trouble when the Aspendos Theatre is crowded. Hopefully, tour providers and the websites in which you reserve let you cancel your reservation 24 hours before the beginning of your tour. 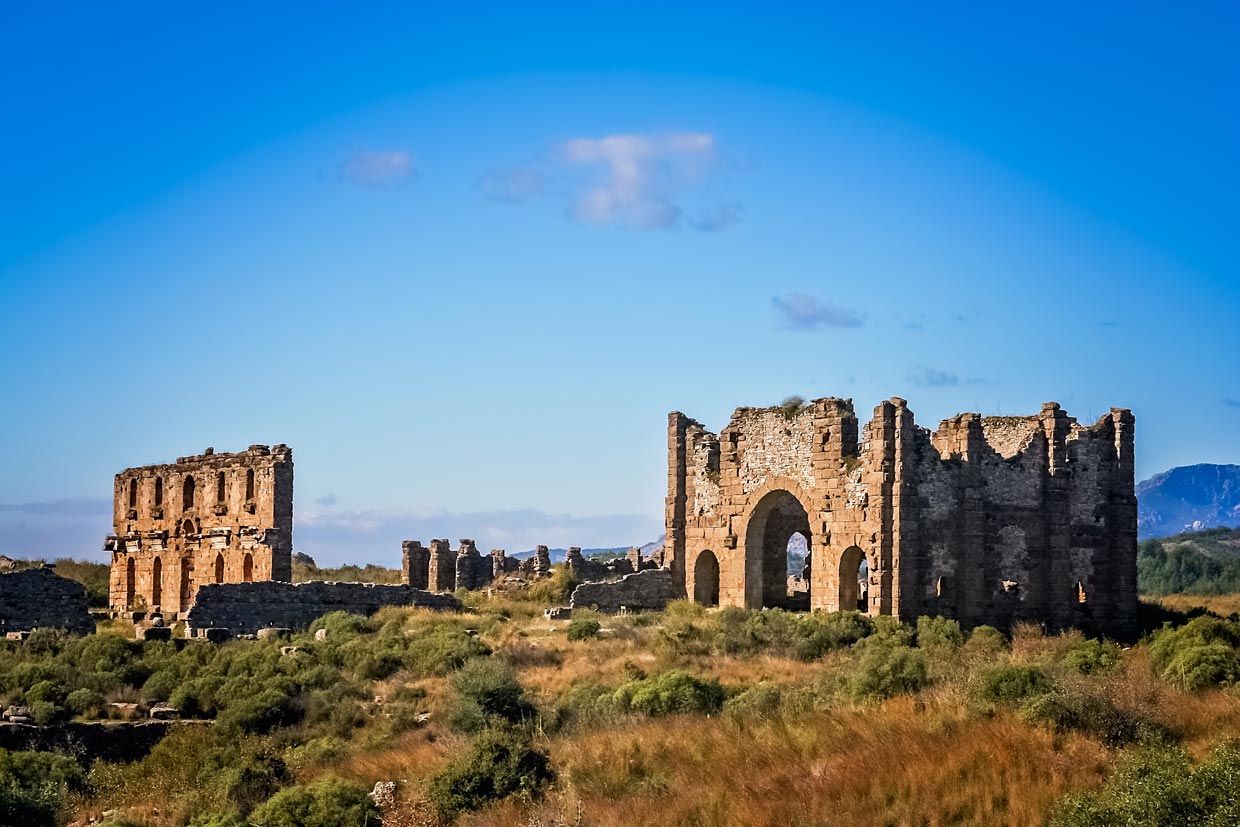 What do I need to visit?

Nothing much! But as the surface is not normal, you’d better find a pair of comfortable shoes for walking a long time on uneven ground. Fortunately, Headscarf and Islamic Hijab are not obligatory for entering the theatre.

Have you ever visited the Aspendos theatre or any other similar ancient theatre? What does their ancient soul whisper in your ears? How did you find this old part of the land? Share your experience with us.