Ancient Theater in Epidaurus, Greece – َAll You Need To Know

Through all playhouses that were established in history, Ancient Theater in Epidaurus always had the highest place among them. Its repute had been traveling through the world since the 4th century B.C. This UNESCO World Heritage Site in Greece hosts thousands of mortal human beings every year.

Saint Paul, one of the Christian’s apostles of the first century, said these words to the locals while he was trespassing a city named Epidaurus “We have been made a spectacle to the whole universe, to angels as well as to human beings “and these weren’t strange words for the greek at that time. The people who believed the world as a playground for their gods for a hundred years and valued theater play the same as life itself. (Photo by Sharon Mollerus via Flickr)

History of Ancient Theater in Epidaurus

There were always all different excuses for the Greeks to perform a show, from celebrations for victories to Adoration of their myths that weren’t a few of them. These worshipping and eulogizes started from temples with little choir groups and limited dancing moves that only had religious meaning.

But later, when playwrights arrived on the scene, it got more artistic and ethical rather than spiritual purposes and exited from temple’s preemption and changed to something that today, we know as drama. This ancient theater is in Epidaurus, the eastern part of the Peloponnese in southern Greece, and constructed by an architect named Polykleitos the Younger, who was also the dome of the Sanctuary Asclepius, on the west side of Cynortion Mountain, near Lygourio.

It was first structured at the end of the 4th century initially with only 34 rows of seats and got fully in use when it enlarged in the middle of the 2nd century A.D., with a maximum capacity of 14’000 audience for hosting the dramatic shows, music, singing, and games. It was mostly dedicated to Asclepius, the ancient Greek god of medicine and health, because locals had faith in receiving positive effects on physical-mental health and chance to have a sweet grace by observing dramatic shows.

This monument experienced its first destruction because of the Visigoth invasion of the Peloponnese in 395 AD. Eventually, it got unusable for a long time when Theodosius, Eastern Roman Emperor, shouted the theater and Sanctuary down because of knowing them as idolatrous and unchristian activities in 426 AD while the monument was suffering from earthquakes.

For almost 1500 years, it remained covered by the incline of trees until 1881, when several excavations started by the Archaeological Society and recovered well-night, except the stage rooms that could not be relieved anymore.

Since the resurrection, original ancient dramas had never been played there anymore, and all the performances that were presented till this day were all reruns of classical plays. The first modern play performed at the theater was Electra, the famous ancient tragedy written by Sophocles in 1838. The performance got halted again due to the German invasion in 1941.

However, it started again in 1954, and a year after that, an annual organization began for presentations of classical dramas, known as the Epidaurus Festival that continues till now in the summer months. 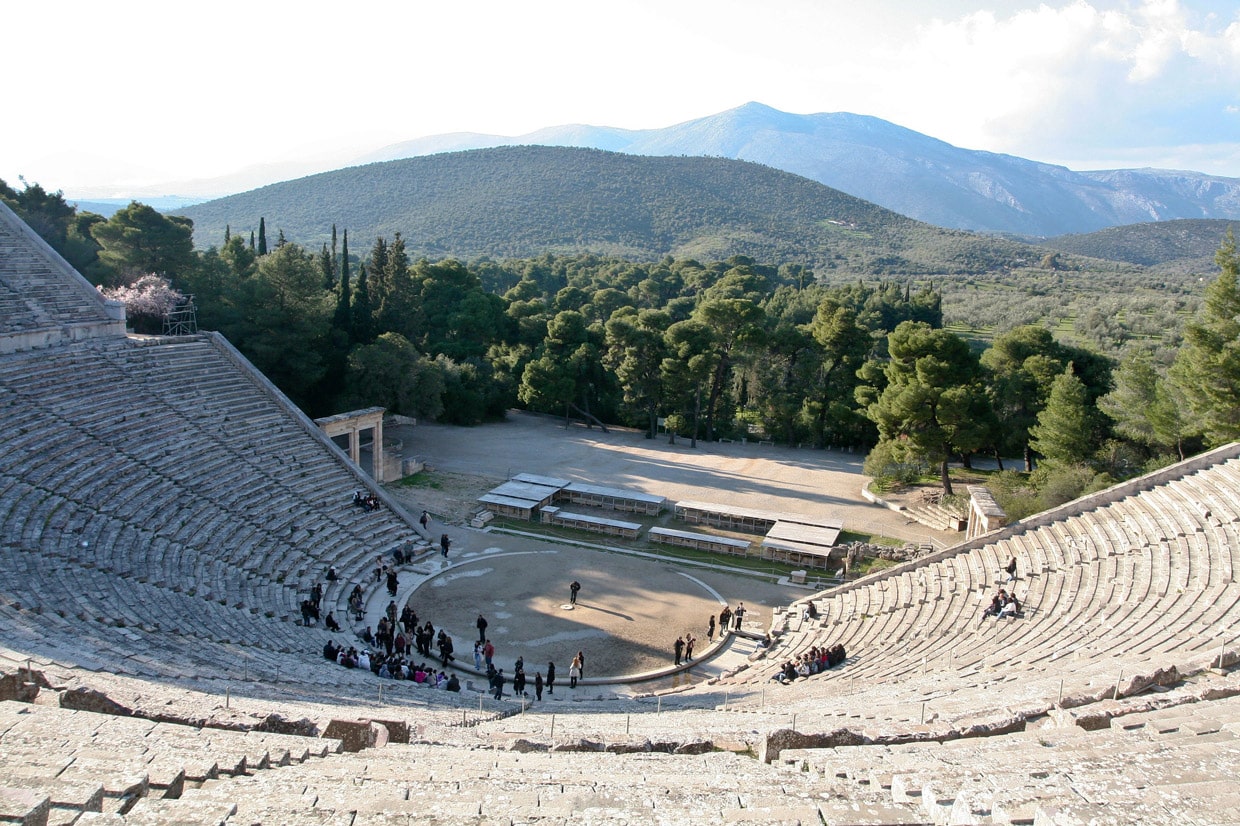 Aesthetics of Ancient Theater in Epidaurus

By its regard to beautiful symmetry and architectural acoustic, it is considered a perfect ancient Greek theater. The marvelous thing that distinguishes this theater from others is its incomparable acoustic. All 15,000 audiences can perfectly hear any sound on the open-air stage, whether a stentorian voice, a deep breath, even the sound of dropping a needle can be heard 58m away in the topmost row of seats.

The circle orchestra is at the heart of the theater. Behind the orchestra in the opposite of the audience seats is the stage of the theater. In the shape of the rectangular, there are two small rooms in the east and the west of the stage. The diameter of the stage is 20 meters, surrounded by 55 rows of seats, while the highest distance of the cavity is 58 meters.

The upper stage of the amphitheater gives you the mystic landscape of Greece that you deserve to have when you are a guest to Hellenes. Therefore, because of its unique architecture and harmony ratio, the theater of Epidaurus stands out as a superb example of artistic achievements throughout history.

Epidaurus theater is within the archaeological site of the Sanctuary of Asklepios in Palea Epidaurus, in the region of Argolis, which is a two-hour drive from the city of Athens. 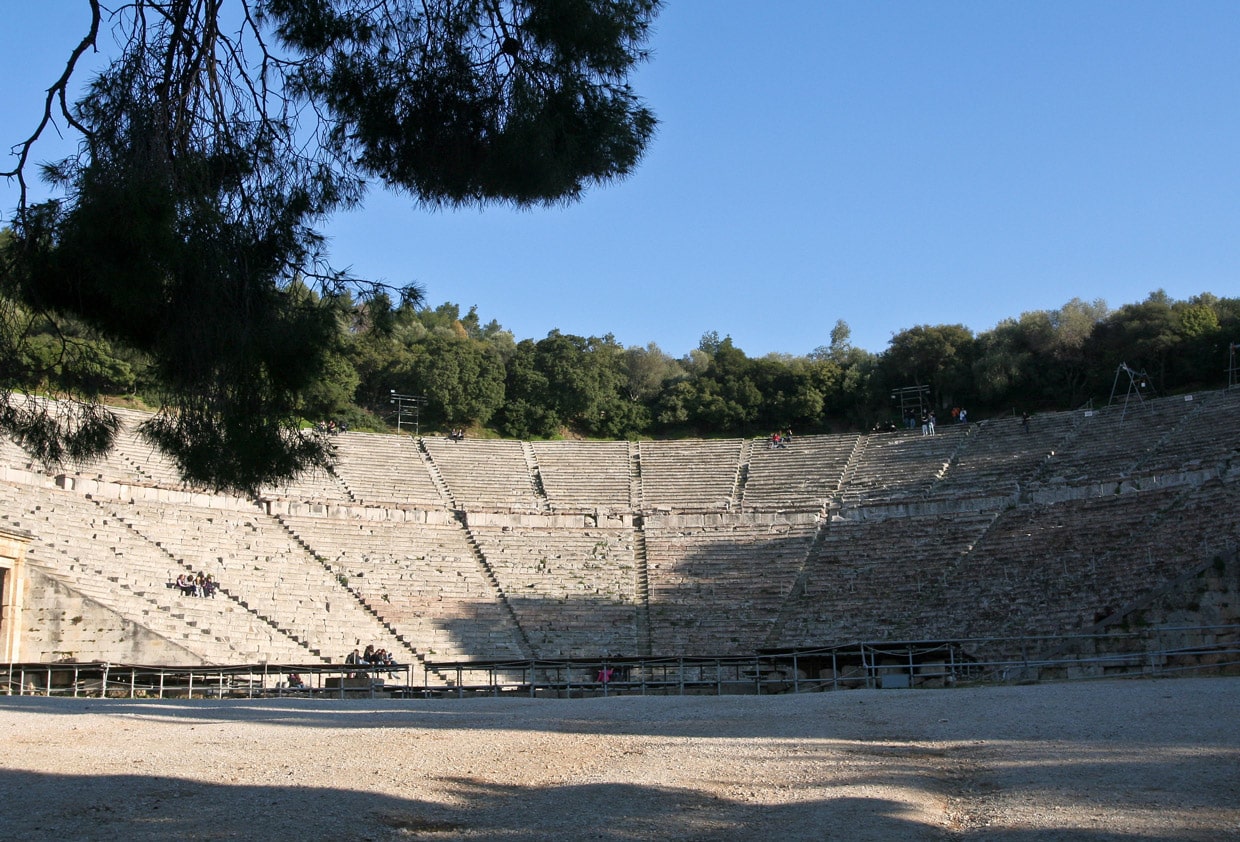 The festival is held annually in June, July, and August of 1954. From the beginning of June, the performance began every Friday and Saturday at 9 PM in the main amphitheater of Epidaurus and 9:30 PM in the Odeon Herodes Theater of Ancient Epidaurus. Despite the early years, the theater’s program is included with a full schedule of music, drama, opera, dance, and visual arts, and the theater provides English subtitles with visual programs for the foreign visitors. The momentum draws thousands of visitors and foreign drama lovers every year. We strongly recommend you at least make sure to book a performance while visiting Athens because it’s truly unforgivable and book it soon! To avoid the sold-out and missing this once-in-a-lifetime experience.

The theater is near the Tomb of Asklepios in palea Epidaurus, which takes two hours from Athens if you are driving by car. After passing the bridge over the Corinth Canal:

If you are staying in Nafplio, directly go to the archaeological site of the Sanctuary by driving through Lygourio town.

Another alternative way is taking public buses from Athens that directly disembarks you beside Epidaurus theater. The bus line starts from Athene’s central bus depot in Kifisos. If you are visiting Athens in the summer months during the festival, there is a special line which is coordinated with the festival that takes you there in a day, and you can return at night with all other ordinary buses. 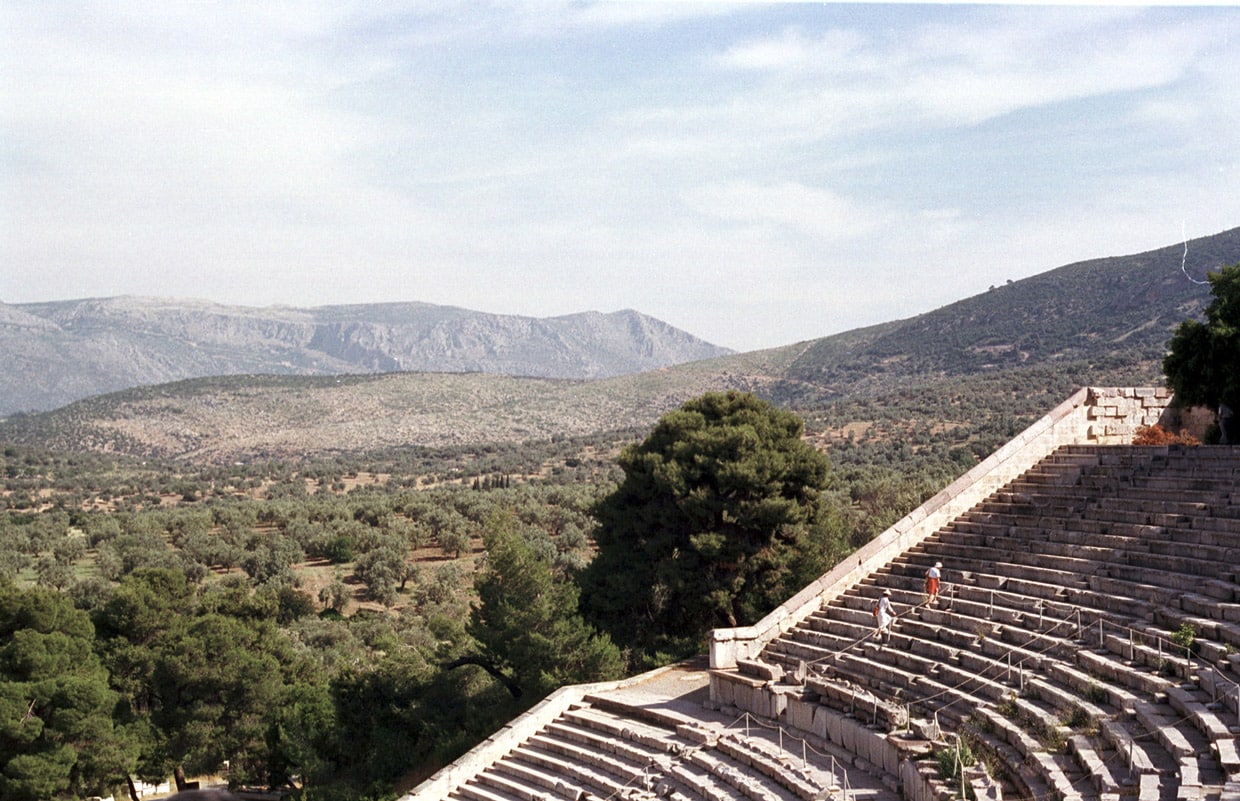 There are also no charge days for entering the theater on 18 May, first November’s Sunday, 28 Oct, 6 March, and last weekend in September.

On two easter occasions, Good Friday & and Holy Saturday, the theater is open from 12 PM -7 PM and 8 AM -3 PM and closed full time on Easter Sunday.

Best Deal
Added to wishlistRemoved from wishlist 0
Add to compare