Added to wishlistRemoved from wishlist 0
Add to compare
From: $540.00

Savor the timeless experience that is a Nile cruise as you sail from Aswan to Luxor on an indulgent ship with an onboard swimming pool. Learn about ancient Egypt from a professional Egyptology guide. Enjoy a full-board feast, a swimming pool, and ample onboard entertainment. train tickets, meals, and all transfers are included. Professional Egyptology is on hand as you visit the temples of Abu Simbel, Philae, high dam, Kom Ombo, Edfu, Valley of the Kings, Hatshepsut, colossi of Memnon, and Karnak.

our expert representative will pick you up from your hotel around 7 pm(depend on your hotel location) where we will drive to Cairo train station.

🚅 Train tickets from Giza to Aswan are included.

The “Philae” temples were originally built to worship the goddess Isis. In all centuries elephants gained a special place in worship so much that a crowd of followers of that worship was gathering to revive the story of the death and resurrection of Osiris. The great temple was built during the third century B.C. and was followed by the temples of Amenhotep and Arsenovis. As for the temple of Hathor, it is considered the last Ptolemaic monument, and its construction was completed before 116 B.C. by Eorgets II. Other Ptolemies added inscriptions to Philae, which are considered masterpieces of the temple. From Egypt, the cult of the god’s Isis extended to Greece, Rome, and throughout the empire, even when Roman rule was applied in Egypt. The rulers tried to beautify the Holy Island. Emperor Augustus Caesar built a temple at the northern end of elephants in the ninth century BC.
The Aswan High Dam, or the High Dam, is a water dam on the Nile in southern Egypt. It was built during the era of Gamal Abdel Nasser and the Soviets helped build it. The dam greatly helped control water flow and mitigate the effects of the Nile flood. Used to generate electricity in Egypt. The length of the dam is 3600 meters, the width of the base is 980 meters, the width of the summit is 40 meters, and the height is 111 meters. The size of the dam is 43 million cubic meters of cement, iron, and other materials. A water flow of 11,000 cubic meters of water per second may pass through the dam. Construction of the dam began in 1960 and the total cost was estimated at one billion dollars, one-third of which was written off by the Soviet Union. The dam worked on 400 Soviet experts and completed its construction in 1968. The last 12 electric generators were installed in 1970 and the dam was officially opened in 1971. 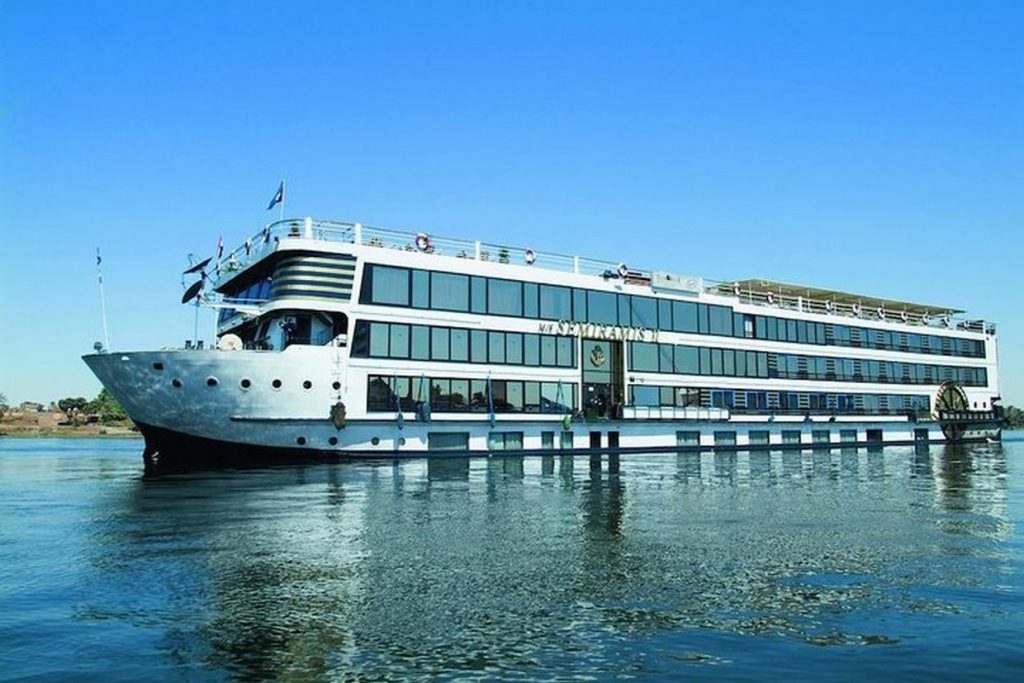 Abu Simbel Temple Complex: Around 5 am it is time to visit one of the most important sites in Egypt Abu Simbel temples. Abu Simbel is an archaeological site located on the west bank of Lake Nasser, about 290 km southwest of Aswan. It is one of the “monuments of Nubia” listed on the UNESCO World Heritage List. And that starts from the direction of the flow of the river from Abu Simbel to Philae (near Aswan). The twin temples were originally carved from the mountains during the reign of King Ramses II in the thirteenth century BC, as a permanent monument to him and Queen Nefertari, to commemorate his victory in the Battle of Kadesh. However, in 1960 the facility complex was completely moved to another location, on an artificial hill made of a dome structure, and over the Aswan High Dam reservoir. It was necessary to relocate the temples to avoid them being submerged during the construction of Lake Nasser.
Temple of Kom Ombo: This temple was established during the reign of Ptolemy VI Philomator, but its decoration did not take place except in the Roman era during the time of Emperor Tiberius and we see in this temple also the same properties that we find in other Egyptian Ptolemaic temples in terms of design, architecture, and decoration, but this temple has a special feature that resulted from Local worship at the place, where people worshiped two local deities, Subic and Horus-headed, Although these two deities differ in their origins and character, they lived side by side for centuries without mixing or pairing with each other, and therefore there are no two holy walls adjacent to the Holies only in this temple, but there are also on the axis of each of these two saints the gates to Side to each other, in the outer wall and in the walls of the two halls of the pillars and beyond.

Temple of Horus: Around 05:00 am be Ready To Visit The ancient Egyptians called it Geb and the Greeks and Romans called it Apollinopolis, Magna, which is the greater city of Apollo. In the days of the Pharaohs, Edfu was the capital of the second region in Upper Egypt. Archaeological excavations since the end of the nineteenth century revealed their importance in the early ages of the history of ancient Egypt, especially the cemetery that dates back to the era of the Old Kingdom in the third millennium BC and found tombs – terraces built with milk. Specialized linguists read the name of one of the first family kings, Oujib, engraved on a rock, near the city. [1] Edfu was placed under the protection of the falcon deity Horus, king of the city
Luxor Temple: A large complex of ancient Egyptian temples located on the eastern bank of the Nile in the city of Luxor today known as the (ancient good). Founded in 1400 BC. The Luxor Temple was built for the worship of Amun Ra, his wife Mut, and their son Khonsu, the deities, also called the Tayyibi Trinity (Theban Triad). The Luxor Temple was built during the reign of the Eighteenth Dynasty and the Nineteenth Dynasty. The most important existing buildings in the temple are those built by the two kingdoms Amenhotep III (1397-1360 BC) and Ramses II (1290-1223 BC) (who added to the temple the open courtyard, the pylon, and the two obelisks). King Tuthmosis the Third also established (1490-1436 BC).

Day 5: Valley Of The Kings, Hatshepsut Temple, Colossi Of Memnon, Temple Of Karnak & Train Back To Cairo (B)

Valley of the Kings, also known as the “Valley of Biban Kings”, is a valley in Egypt that was used over the course of 500 years during the period between the sixteenth and eleventh centuries B.C. The valley is on the west bank of the Nile, facing Thebes (now Luxor) in the heart of the ancient funerary city of Thebes. The Valley of the Kings is divided into two valleys; the Eastern Valley (where most of the royal tombs are located)
Temple of Hatshepsut at Deir el Bahari is a temple from the eighteenth Egyptian family, and the best of the remaining temples were built about 3500 years ago in Deir el-Bahari, Egypt. It was built by Queen Hatshepsut on the west bank of the Nile opposite Taiba (the capital of ancient Egypt and the seat of worship of Amun) (Luxor today). The Hatshepsut Temple is distinguished by its unique architectural design, compared to the Egyptian temples that were built on the east bank of the Nile in Thebes. The temple consists of three successive floors on open terraces. The temple was built of limestone, and in front of the pillars of the second floor, statues of limestone of the god Osiris and Queen Hatshepsut were installed in a beautiful distribution. Originally, these statues were colored.
Colossi of Memnon, a statue of Memnon, or a giant of Memnon, are two huge statues, established around the year 1350 BC, which is all that remains of a temple in memory of the Pharaoh (Amenhotep III), located in Thebes, Western Egypt. They are for King Amenhotep the Third, one of the kings of the Eighteenth Dynasty, and it is the most powerful ruling family in ancient Egyptian history. The statue’s height reaches 19 meters and a third of the meter, and the Greeks called (Memnon) upon them when the eastern statue cracked from them and produced a voice similar to the legendary hero (Memnon) who was killed in the wars of his parcels and was calling his mother (Ayus) the goddess of dawn every morning, and she was crying over him Her tears were dew.
Karnak or Karnak Temple Complex, which is known as the Karnak Temple, is a group of temples, buildings, and columns, as expansion and construction operations continued from the Pharaonic era, specifically the Middle Kingdom kings until the Roman era in Luxor in Egypt on the eastern coast. The temple was built for the divine Trinity Amun (Amun Ra in modern times), his wife is the goddess Mut and their son is god Khonsu, and each of them has a temple belonging to the complex of Karnak temples. Sometimes the tourists and the non-specialized in Karnak temple only mean the temple belonging to Amun I, Amun Ra. The temple was named after the city of Karnak, and it is a modern name that is distorted from the Arabic word Khorang, meaning the fortified village, which had been launched on many of the temples in the region during this period. While the temple was initially known as “Bir Amoun” meaning the Temple of Amun or Beit Amun, and during the era of the Middle Kingdom it was called Abet Sot.

Arrive in Cairo and transfer you to any Hotel in Cairo or Giza Or Cairo Airport.

There are no reviews yet.

There are no inquiries yet.