The Zhangjiajie National Forest Park itself was recognized as an authorized national park in China in 1982, making it the very first national forest park in China. This park covers an area of about 185 square miles (480000 m2), which has stunningly beautiful regions in itself, making it one of the must-see places when you are visiting China.

If you are a nature lover and enjoy spending time around natural rock formations, forests, and calm streams, you need to visit the entire Wuilingyuan Scenic Area, especially the Zhangjiajie National Forest Park. There are all kinds of attractions to visit while in the park including the Huangshizhai (Yellow Stone Village), Golden Whip Stream, Hallelujah Mountain (the entire Yuanjiajie section), and the Bailong Elevator.

There are more places to see to feel the calm and relaxing environment and enjoy the weather, but some of these places are the number one priority, such as the glass bridge on the Zhangjiajie Grand Canyon. You can also enjoy the rich flora and fauna as you make your visit to the park.

Top Places to See in The Zhangjiajie National Forest Park

There is just so much to see inside the park. You can choose from hiking in areas such as near the Golden Whip Stream, which is a natural part of the visit, or you can go and see the tallest glass elevator on the planet. The visit will take a long time due to the large ground the national park covers.

For the same reason, the tickets allow you to visit for three days so you can see more of the park, and enjoy the trip as much as possible. There are several methods of transportation inside the park as well as maps of the landscape on billboards for everyone to see. You can also use the help of local guides near the entrance of the park. 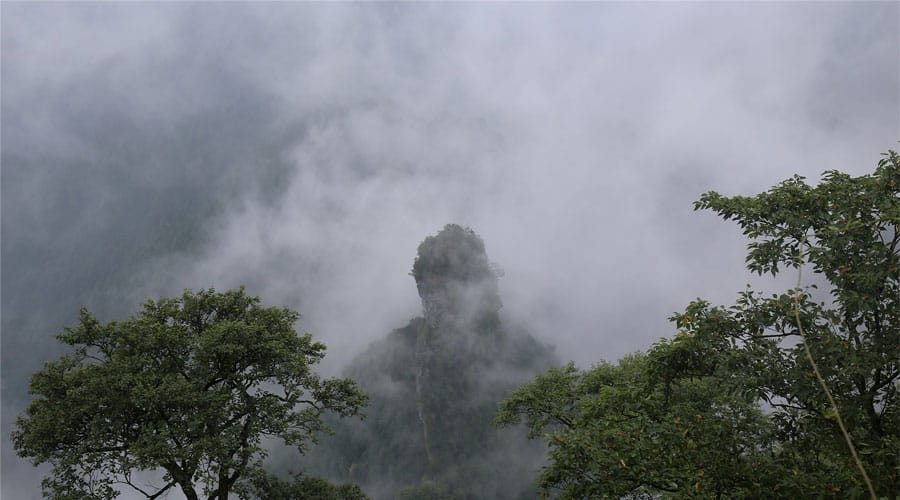 Here are some top places you can visit while considering the large crowds and limitations in time:

The best opportunity to go hiking in the Zhangjiajie National Forest Park is perhaps walking along this 3.5 miles (5.7 kilometers) long stream. The clear water, beautiful scenery, as well as the calm and relaxing environment here, can make it one of the best and most memorable hikes of your life.

As you walk in the Golden Whip Brook, you will also see the wildlife of the park such as the monkeys in the woods as well as the fish in the stream. Just be careful not to have anything shiny with you as the monkeys may take them from you, thinking they are tasty snacks. Also, it is best to keep any snacks, food, and drinks inside a bag and not feed the animals inside the park.

You can also see other streams joining the Golden Whip Stream along its path and some other enchanting elements during your journey. The walk can take several hours; therefore, you need to have appropriate shoes and water bottles.

Yellow Stone Village, also known as the Yellow Stone Stronghold, is actually a 16.5 hectares observation platform, the largest of its kind, located inside the Zhangjiajie National Forest Park. These rocks are more than 1000 meters above sea level and have several amazing spots inside them that you should not miss.

These top spots include The Imperial Edict, Tranquil Trail, Needle Peak, Southern and Western Gate to Heaven, Five Fingers Peak, Echo Hall, Golden Heavenly Bridge, and many other spots. The visitors to this area say that a visit to Zhangjiajie National Forest Park is not complete until you have visited the Yellow Stone Village!

In this part of the park, you can go to the Cable Station and ascend to the top, or go hiking. For both of these options, you need to get to Laomuwang first. The hike can take 2 hours and requires you to be ready while the cable will only take 5 minutes to show you the entire trail and take you to the top, where there is a buffet for weary travelers.

The Hallelujah Mountains from The Avatar movie, previously known as the Southern Sky Column, is part of a larger area in the northern parts of Zhangjiajie National Forest Park. This entire section of the park is also known as the Yuanjiajie, which includes several other unique rock shapes and formations, covered by trees. This area inspired the floating mountains of planet Pandora in the Avatar Movie, making it one of the top places for tourists. The route to Yuanjiajije itself is also very beautiful, making the path and the Hallelujah Mountains themselves, the perfect spot for taking pictures.

The elevator is near to the main entrance near Wulingyuan; therefore, it is easy to find. Other than that, some of the buses inside the complex can take you to this spot. Using the elevator, you can ascend to one of the highest places in the park and see most of it. You can then decide where you want to go and how to get there.

It is suggested to visit this glass elevator in early hours, or times that it is less crowded because there will be many other visitors wanting to see it.

Known also as the Zhangjiajie Glass Bridge, the Zhangjiajie Grand Canyon Skywalk is the longest and highest glass bridge in the world. It is about 430 meters long and 300 meters high, giving a perfect view over everything under your feet.

If you are short in time and are not afraid of heights, it is recommended to visit the bridge where you can see all of the Zhangjiajie Grand Canyon without going down there. It is also worth mentioning that a lot of other people may have the same idea, and therefore the bridge can get crowded.

If you want a more thrilling experience, you can also go bungee jumping near the middle of the bridge! Note that you need an appropriate shoe to walk on the glass bridge. High heels are among the forbidden types of shoes on this bridge. While on the glass bridge, you will not be allowed to run or jump on the glass.

Other than that, you may be required to leave some of your belongings at the luggage office, as well as to wear shoe covers. 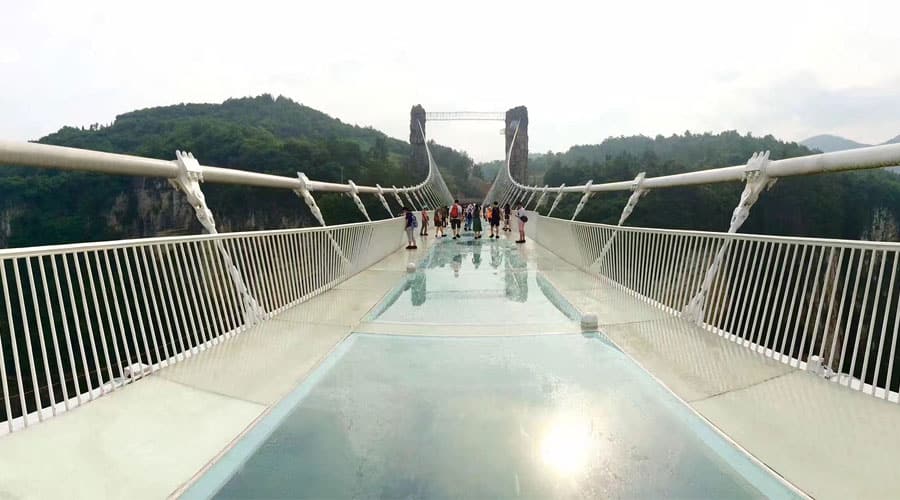 There are also other areas worth visiting inside the park but due to limitations of time, you may only get a chance to visit some of the top spots. If you want to get the best experience of this visit, it is better to plan a trip that lasts for several days. You can always get tours for the entire Zhangjiajie National Forest Park to get the best experience and with a guide, but even if you do not do that, there are maps of the area as well as means of public transportation inside and outside the park.

The recommended time for visiting Zhangjiajie National Forest Park is during winter and summer. This is because of the sub-tropical climate of this part of China, which makes it more pleasant for traveling. If you are planning to visit for several days, check the forecast and temperature before anything else.

If you are inside the city of Wulingyuan, you can get to the main entrance of the park via public buses, departing from Zhangjiajie Central Bus Station. From the entrance, you can get inside another bus to the main sections of the park. Near the main entrance of the park, there are also several places to stay for tourists. It is better to book everything, including the tickets for the park, to avoid the large crowds of tourists. 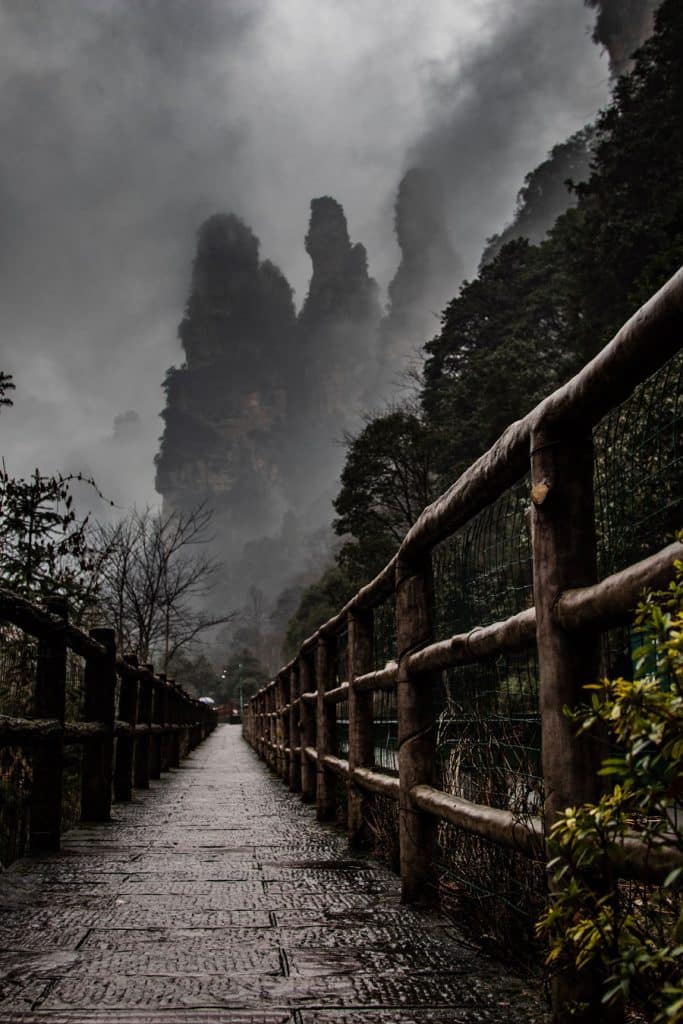 Interestingly, over 149 species of chordate animals live in the Zhangjiajie National Park and among them, 2 species are under national protection. Some of these animals are Golden Pheasant, Rhesus Monkey, Giant Salamander, and Musk Deer. As a final word, Zhangjiajie National Park is a must-see for China’s tourists; therefore, don’t miss this fantastic opportunity and share your experience and thoughts with us. Besides, if you need any more information, feel free

The Sustainable Berlin of the Future Private Bike Tour