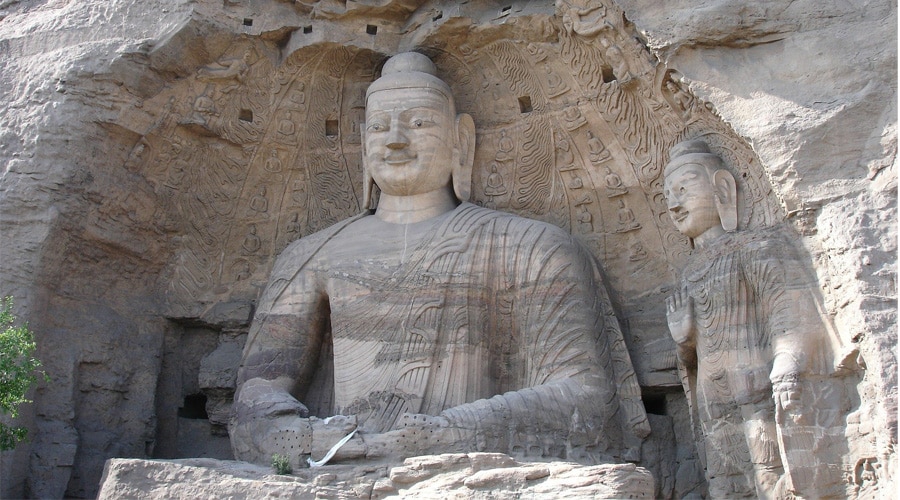 The Yungang Grottoes Site is one of the three top cave clusters in China constructed in the Wei Kingdom era and inscribed on the UNESCO World Heritage List.
December 19, 2022

The Yungang Grottoes Site, formerly called Wuzhoushan Grottoes, is built at the foot of Wuzhou Mountain on the western side of Datong City. The number of Yungang Grottoes is 252 and there are 51,000 statues here. The origin of these cavities, which are directly carved in the hollow of the mountain, dates back more than 1500 years.

History of Yungang Grottoes in Datong

The city of Datong, formerly called Pingcheng, was the capital of the Wei Kingdom between 398 and 494. Datong is located in the northern part of China. In the Wei Kingdom era, the city became the center of politics, economics, and culture. For almost thirty years, until 523, the city of Datong retained its major role in the kingdom. A revolt led it to decline and abandonment.

It took about 65 years to make the sculptures adorning the Yungang Grottoes. The work began in 460 and ended in 525. This was a period of prosperity for the evolution of Buddhist rock art in the kingdom of the Wei dynasty. The flourishing of Buddhism developed when the first emperor ascended the throne. Since then, the monk Tan Yao began to work on the Five Caves. These cavities are the main point of reference for the development of Buddhist art in North China. The imperial court supported the Yungang Cave Project.

By the year 525, the work almost ended up, but monks and lower-ranking officers persisted in digging cavities to carve statues. In order to protect the Yungang Grottoes, buildings made of wooden huts were built in front of the cavities. These wooden monuments rested on octagonal pillars and each one was decorated with dozens of drawings representing Buddha. The caves were thus assimilated into the temples. A war that occurred in 1122 contributed to the destruction of the temples.

The Size of Buddhist Sculptures

The size of the Buddhist sculptures that adorn these cavities is very different. Some sculptures are between 10 and 30 meters high and some of them are a few cm.

Originally, most of the sculptures were painted but only a few statues currently have traces of paint. The weather and light deteriorate the paint layers.

The Forms of The Caves

The forms of the caves are a mixture of traditional Chinese art with styles derived from other countries. Indeed, there are influences of the Hellenistic style that traveled all over Persia and arrived in the region of Gandhara located in the northern part of India via the famous Silk Road. 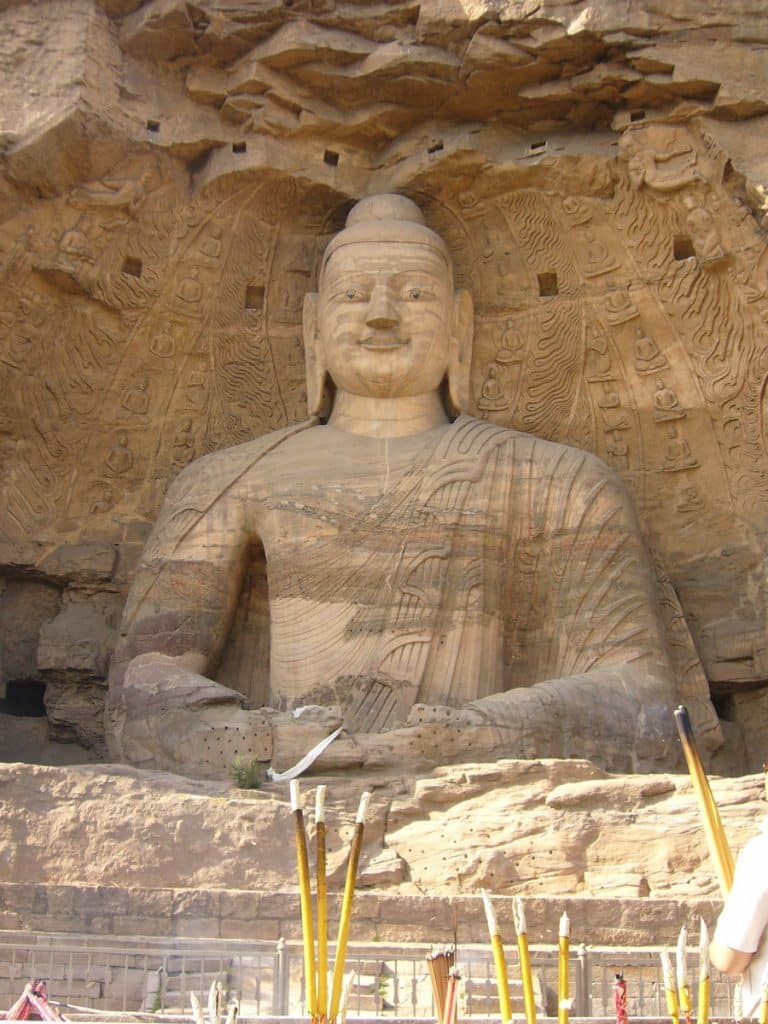 Cavities built during the ancient period, which are composed of five main rooms, are so simple. This feature makes them sublime. The monk Tan Yao led the works during the elaboration. Statues ranging in height from 13 to 15 meters were placed in spectacularly sized caves, dug to contain them. The ensemble is in the shape of a U and the vaulted ceiling is reminiscent of the thatched roofs of buildings dating back to ancient India. A door and a window complete the structure of each of the caves.

The central part of the caves is decorated with the most imposing figures, while the exterior facades have cavities adorned with thousands of Buddhist statues. This is the largest set of caves among those found on the Yungang site. There are also four groups of twin cavities and another set of triple caves at the Yungang site. A rapid evolution of the Han style occurred during this time; the themes are different from those used frequently before.

The caves of the recent period are located in the valley of the Dragon King Temple. The period from 494 to 525 saw the construction of over 200 caves and niches that are less imposing than the caves mentioned above. In fact, the cavities of the recent period are between the average and the small size, with non-regular or complex shapes. The doors of the cavities have carved decorations and they are on the cliff.

You should set aside half a day for visiting the Yungang Grottoes. It would be better to start your visit early in the morning and you can even plan for a picnic, as the park is ideal for that. Make sure to visit this attraction at the time of your trip to China and leave your comments and experiences for us.