Yuexiu Park is the largest park in downtown Guangzhou covering an area of 920,000 square meters comprising of three artificial lakes and seven hills.

Located in Yuexiu District, Yuexiu Park is the largest park in Guangzhou, which covers 920,000 square meters (9,300,000 square ft). In spring, the park is amazing, the weather is pleasant, and you have the chance to visit the Guangzhou Garden Fair. In summer, the temperature may go a bit higher, but the park is still a beautiful place to enjoy your time. (Photo by © Hauke Musicaloris via Flickr)

Yuexiu Park is a mountainous park known by some other names as Mount Yuexiu, Yuexiu Mountain, and Yuexiu Shan, which are taken from its Mandarin name. Formerly, it was known as Mount Yut-Sau or Yut-Sau-Shan from Cantonese pronunciation.

In this park, you can find different kinds of Chinese architecture such as towers, pavilions, water pavilions, and statutes. The park’s main visiting attractions are the stone sculpture of the Five Rams, the site of the Ming Dynasty City Wall, Cannon Site, and Zhenhai Tower.

The area of Yuexiu Park once formed the northern side of the old walled city, dating back to the Qin Dynasty. Today, most of these walls have been ruined and the city has expanded far beyond it. After Guangzhou’s liberation, the new government turned the area into a large and modern park that is listed among the Eight Scenic Spot of Guangzhou.

Yuexiu Park is a vast and beautiful area where you cannot visit each section in a short time, so if you had the chance to visit this Cantonese beauty, be sure to check out the highlights.

Constructed in 1960, Guangzhou’s Five Rams Sculpture is located at the top of Yuexiu Mountain. This statute is one of the emblems of Guangzhou, which is made up of over 130 granite pieces. Rams are considered as a good luck symbol in Guangzhou. The city is also nicknamed as the City of Rams and this sculpture is an excellent representative of this name.

There is a legend about Guangzhou and these rams. The legend says that around 2,000 years ago, Guangzhou had infertile lands and people were cursed with famine, no matter how much they worked hard. The situation was the same until one day when five immortals wearing garments in different colors entered the city riding on five rams. The rams were carrying sheaves of rice in their mouths and the celestial beings bestowed blessings and the rice to the people and land.

As the divine began leaving the city, the rams they rode turned into stone, and it was when the city got rid of the famine and became a prospering and vibrant place. These immortals are also celebrated in the Temple of the Five Immortals. 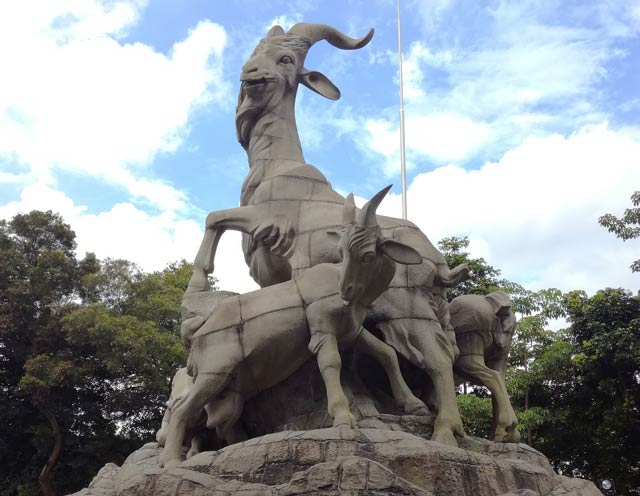 This attraction is located on top of Yuexiu Mountain. This tower is a Pagoda with five stories, and local people refer to it as the Five-Story Tower. It is one of Guangzhou’s landmarks, which has a height of 28 meters (92 feet) and a width of 16 meters (52 feet).

The Zhenhai Tower has an interesting story. In 1380, a guard tower was built here as the first one in Lingnan. According to legends, Zhu Liangzu, Marquis of Yongjia, and a member of the Ming Dynasty (1368-1644) noticed purple and yellow air rising over Yuexiu. A sorcerer claimed that it was the sign of a new emperor coming to obtain the throne.

To stop this omen, he built the tower in 1380 to disrupt the feng shui of the mountains. The Zhenhai Tower has been destroyed and rebuilt five times since its erection, over 600 years ago. The Zhenhai Tower is now the host of Guangzhou Museum since its opening in 1928. This museum is house to documents and relics, which shows the history of Guangzhou over 2,000 years. Guangzhou Museum of Art is one of the earliest museums in China. This museum is a non-profit one and is freely open to the public.

Yuexiu Park is a place where you can enjoy a serene environment with the historical attractions, but on the other hand, the three lakes, their exuberant plants, and singing birds make it a natural beauty attraction too. These three artificial lakes are called Nanxiu, Dongxiu, and Beixiu, which cover an area over 50,000 square meters (538,213 square feet).

These three lakes are linked with arch bridges. They are also decorated with Lingnan Style corridors and pavilions. Beixiu Lake is where you can go fishing and boating. The other two, Nanxiu Lake and Dongxiu Lake, are elegant and tranquil places suitable for those who like to paint with a gorgeous background.

This is the area for those nature lovers who do not want to get far from the city to enjoy something with that nature spirit. Also, flower exhibitions will be held from time to time.

The park is large; therefore, there are some facilities here. You can find an amusement park, restaurants, swimming pool, and gymnasium in Yuexiu Park as well. So, you can set aside a full day to enjoy the park and make the most of it. Do you have any more information to add? Feel free to leave your comments and thoughts for us. Besides, if you need more information, let us know in the comment section and our professional guide will reply as soon as possible.