Yonghe Temple in Beijing, known as the Palace of Peace and Harmony, is Tibetan largest and the best-preserved lamasery in China constructed in 1694.

Situated in the northeast area of Beijing City, the Yonghe Temple (also known as the Yonghe Lamasery and The Yonghe Lama Temple) is the biggest and most well-preserved lamasery in modern China. It is also called Harmony and Peace Lamasery. (Photo by © Jorge Láscar via Flickr)

Constructed initially in 1694 during the Qing Dynasty’s reign, this structure used to be the residence of Emperor Yongzheng when he was serving the country just as a prince. Its function was then changed formally from a dwelling to a lamasery in 1744. From then on, it became the Lama administration’s national center.

Main Buildings of The Yonghe Temple

When you arrive at the south end of the temple, you will enter through a yard that has a screen wall and 3 Paifangs or gateways. You will also notice the red walls and stone lions, which symbolize its origin as the residence of a Royal Family member.

If you, on the other hand, enter the Gateways in the north, you will see a wide straight road, which functioned as the road for the carriages of the Qing Dynasty’s emperors and wives. At the far north end of this road, the Gate of Peace Declaration or Zhaotaimen exists, which is composed of 3 large archways. The central archway was only for the exclusive use of the emperors. 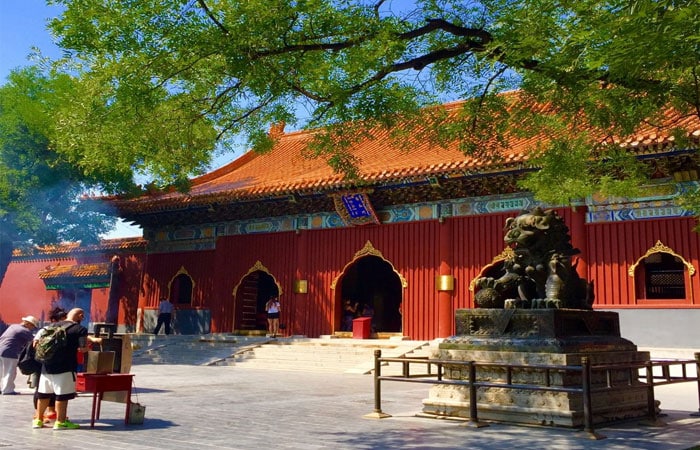 When you pass through the Zhaotai Gate, you will find the second yard which houses a Bell Tower on the eastern side and a Drum Tower on the western side. There are also two octagonal Stele Pavilions located in front of the mentioned towers. Emperor Qianlong’s own words were engraved in the stele to explain the traditional and the historical reasons why the dwellings should transform into temples.

As you try to leave the Devaraja Hall, you will instantly see an ancient copper cooking vessel that was made in 1747 during the Qing Dynasty’s reign. This vessel is included in ‘the three rarest things in Beijing’ because of its high artistic value. There are six doors placed in the upper part of the vessel. Each door has two dragons playing with a ball cast while three lions that are playing with a ball are carved on the seat.

On the northern side of the vessel, you can find the Great Stele Pavilion where Emperor Qianlong’s words about the origin and meaning of Lamaism are engraved. If you go to the north of the pavilion, you will find an odd-shaped hill that is known as Xuyu Hill. It is a divine place of rich religious concepts constructed in the center of a pool. It represents a place that each Buddhist would want to go eagerly.

The Hall of Harmony and Peace

The main palace of the Yonghe Temple is the magnificent Hall of Harmony and Peace. It has three bronze Buddhas namely Kasyapa-matanga on the right, Sakyamuni in the middle, and Maitreya on the left. There are also 18 Arhats or Buddha disciples’ statues on each side of the Hall. Lastly, there is a picture of Avalokitesvara with numerous hands and eyes that is hanging on the west wall.

Yongyoudian or Hall of Everlasting Protection is located at the north of the Hall of Harmony and Peace. This is where Emperor Yongzheng’s living room is situated when he was still living here. Today, there is a statue of Bhaisajya-guru where sacrificial offerings can be made.

The Hall of the Wheel of the Law of Falundian

Far north, The Hall of the Wheel of the Law of Falundian exists. It is the location for Lamas reading scriptures and conducting Buddhist ceremonies. This structure has a unique architecture featuring Tibetan and Han Nationalities. It was used before as the residence of the Emperor’s wives.

At the center of the hall, there is a large statue of Tsong Kha-pa who was an ancestor of Lamaism. At the back of the statue, you can see an Arhat Hill, which contains 500 Arhats made of gold, silver, copper, iron, and tin. There is also a wooden basin located in front of the Hill, which was used for washing and cleaning the body of Emperor Qianlong 3 days after he was born.

The last formal palace here is the Wanfuge or Pavilion of Ten Thousand Happiness. It is the highest structure in the Yonghe Temple with 3 stories. Inside of it, there is an exhibition of more than ten thousand Buddha and in its center, there is a gigantic statue of Maitreya placed on a white marble base.

You can also buy souvenirs in the Yonghe Temple and among them, incenses are highly recommended. As a tip, set aside at least 1.5 hours to visit this fantastic temple. Don’t forget to add the Yonghe Temple to your Beijing itinerary and share your experience and thoughts with us. Besides, feel free to leave your questions and our professional guides will reply as soon as possible.

Classical Tour of Greece from Athens