Yellowstone National Park is not only the first national park in the U.S., but it is also best-known as the first national park in the world, established on March 1, 1872. This area is known as the heart of the Greater Yellowstone Ecosystem, abounding nature and culture. The appearance of spring, rain, and snowmelt rejuvenate underground systems, which cause swell Yellowstone’s rivers and lakes to provide essential moisture for plants, animals, and people downstream. The National Park Service attempts to preserve Yellowstone for the enjoyment, education, and inspiration of all people. Yellowstone truly makes you sock up the spectacular hiking trails, beautiful sceneries, Old Faithful, and geysers shooting water 100 feet into the air.

Where is Yellowstone National Park?

As the oldest and probably the most famous national park in the United States, Yellowstone covers 3,472 square miles of northwestern Wyoming. It extends into the southern parts of Montana and eastern Idaho. It takes many hours to drive between these entrances, so visitors need to check the roads’ status at the entrance they aim to use while planning their trip. It is also well noted that the wildland fire danger is low, and there are no fire restrictions.

What to See in Yellowstone National Park?

Yellowstone houses hot springs and geysers on top of a dormant volcano than any other place worldwide. You will find many wonders around at this stunning national park, from the Yellowstone Grand Canyon to wildlife like the grizzly bear, America’s largest buffalo herd, and wolves. In addition to its various geological features, Yellowstone National Park also has plentiful wildlife. It houses the oldest and largest bison herd in the United States, along with wolves, elk, and grizzly bears. Nature is a massive attraction for photographers to capture Yellowstone animals in their natural habitat. It also offers memorable experiences to Fishermen who travel to Yellowstone for the opportunity to catch the highly sought-after native cutthroat trout, as well as other non-native trout species.

Located 1.8 miles southeast of Canyon Junction in the Canyon Village complex, it is one of the absolute best places to visit. The Grand Canyon of the Yellowstone River represents its complex geologic history in dramatic colors and shapes. It is 20 miles long, and its highest walls reach 1200 feet. The colorful walls and thundering waterfalls soothe visitors’ eyes, offering fantastic photo opportunities. You will also find stunning puffs of steam that mark hydrothermal features in the Canyon’s walls. The Upper and Lower Falls of the Canyon add to the magnificence of this unique natural treasure. 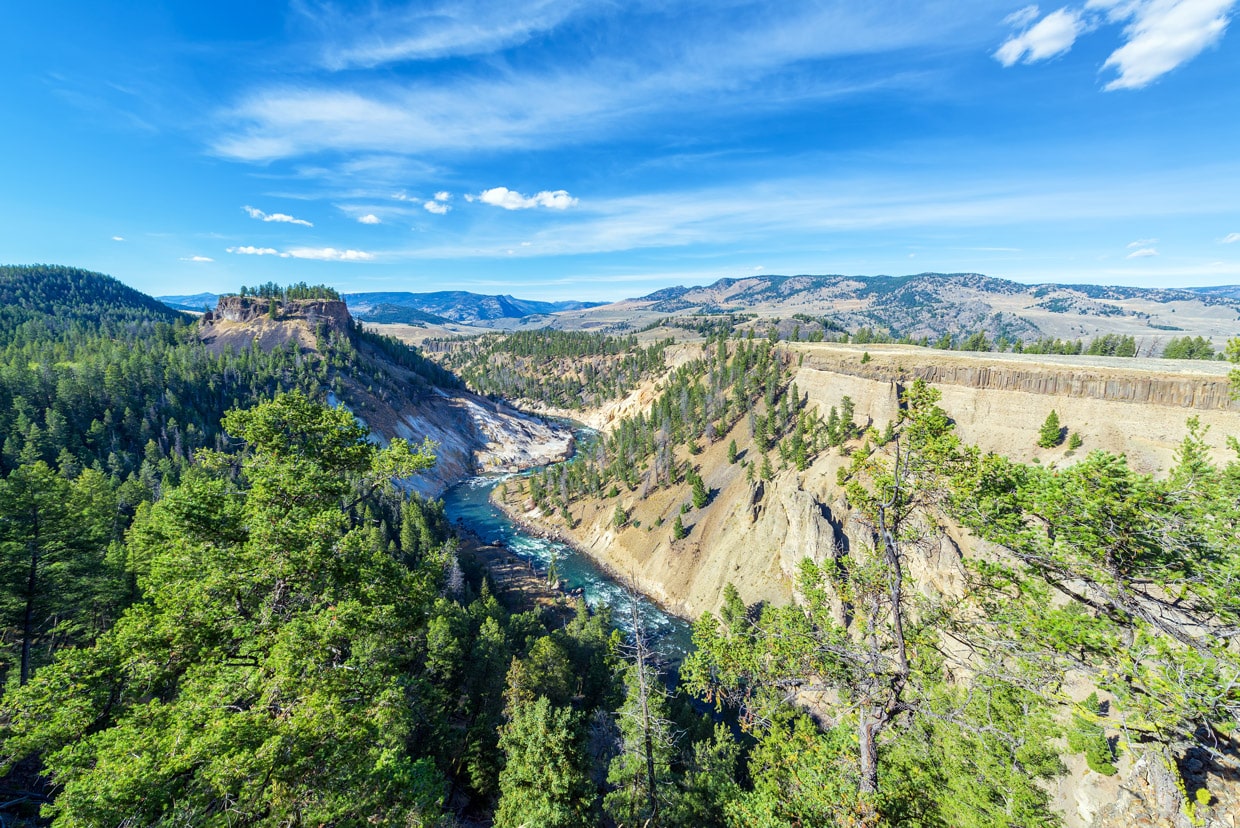 Situated in Yellowstone’s Upper Geyser Basin in the southwest part of the park, it was found in 1870 by the Washburn Expedition. The name derives from its frequent and somewhat predictable eruptions, which number more than a million since Yellowstone became the world’s first national park in 1872. Visitors worldwide journey to the area to watch its stunning eruptions generally lasted around 1.5 to 5 minutes. Currently, it emits around twenty times a day, varying in height from 100-180 feet. Stay a safe distance as it is scalding. The water temperature at the vent reaches 204°F (95.6°C) during an eruption, while the steam temperature has been measured above 350°F. 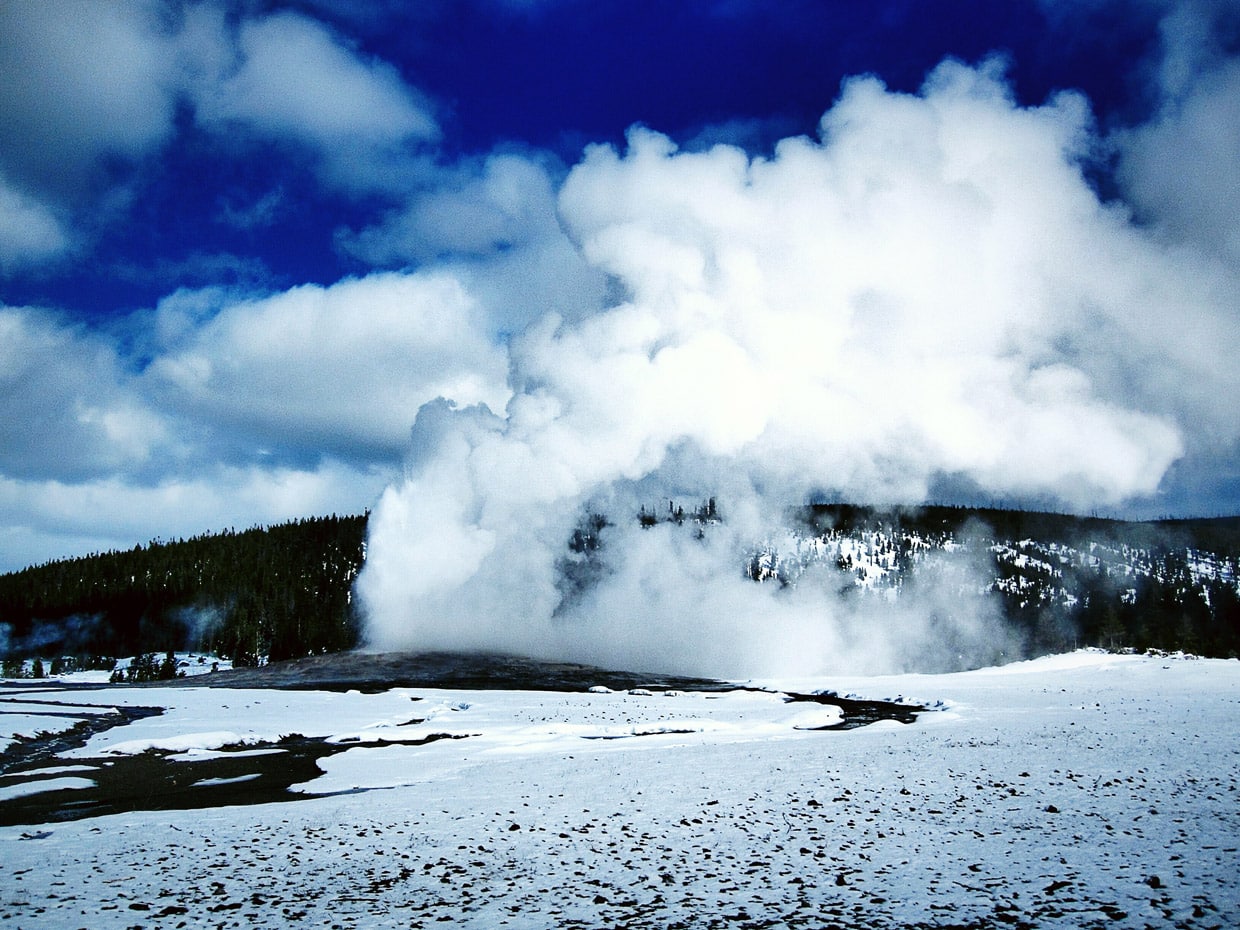 It is one of the most famous hot springs in Yellowstone, located about a mile away from Old Faithful. Just walk along the paved trail, and at the end of the boardwalk, you will find this historical pool. The spring is named for its similar shape to the trumpet of the Morning Glory flower. Morning Glory Pool used to have clear blue water, but throwing much garbage, like coins and rocks, into the spring by visitors in the past has caused the water to lose its clear blue color. 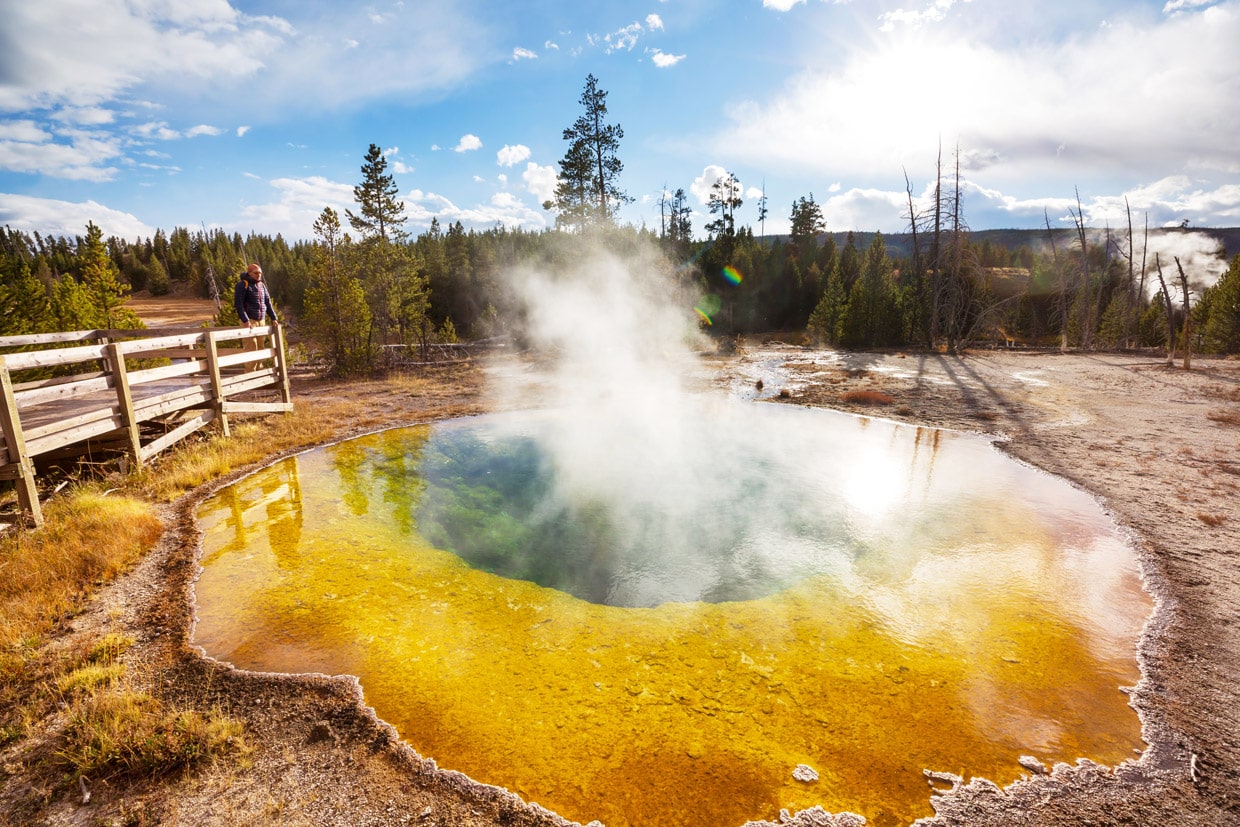 More than four million people visit Yellowstone National Park on tour buses, in family vans, on bicycles every year. But the automobile is the most common method of travel in and around the park. The lack of trains makes it hard for visitors to even get near the park without a vehicle, and you won’t find trains or buses with regular schedules.

Take a bike ride and soak up jaw-dropping sceneries, but you should exercise extreme caution since roads are twisty and rife with wildlife. Just 1-mile north of West Yellowstone, Montana, you will find the nearest airport to the park, the Yellowstone Airport, which has commercial flights seasonally. 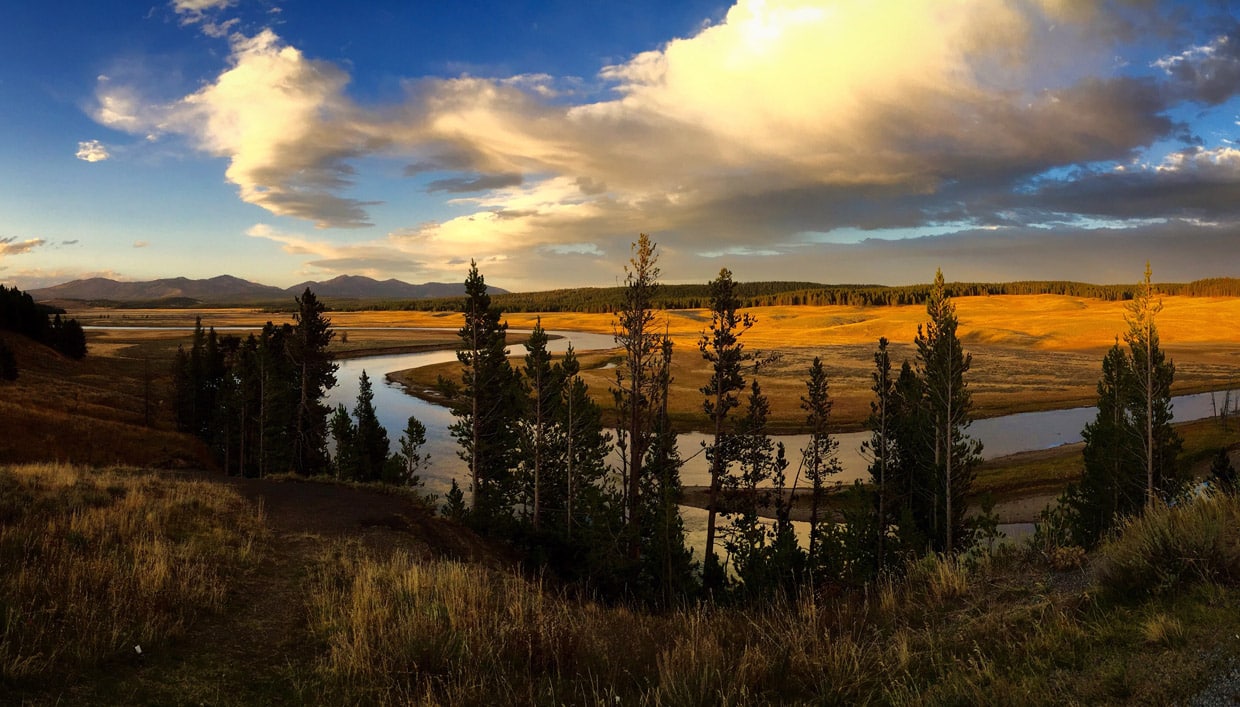 When to Visit Yellowstone National Park?

You can visit the park from April to May and between September and October when you’ll find mild temperatures and less population. The most popular months to visit are July and August as the weather is warm enough to sleep outside and children are out of school. The region is characterized by long, cold winters and short, relatively mild summers. There is not much moisture, winter or summer, and the air is dry, except for the brief wet season in March and April. 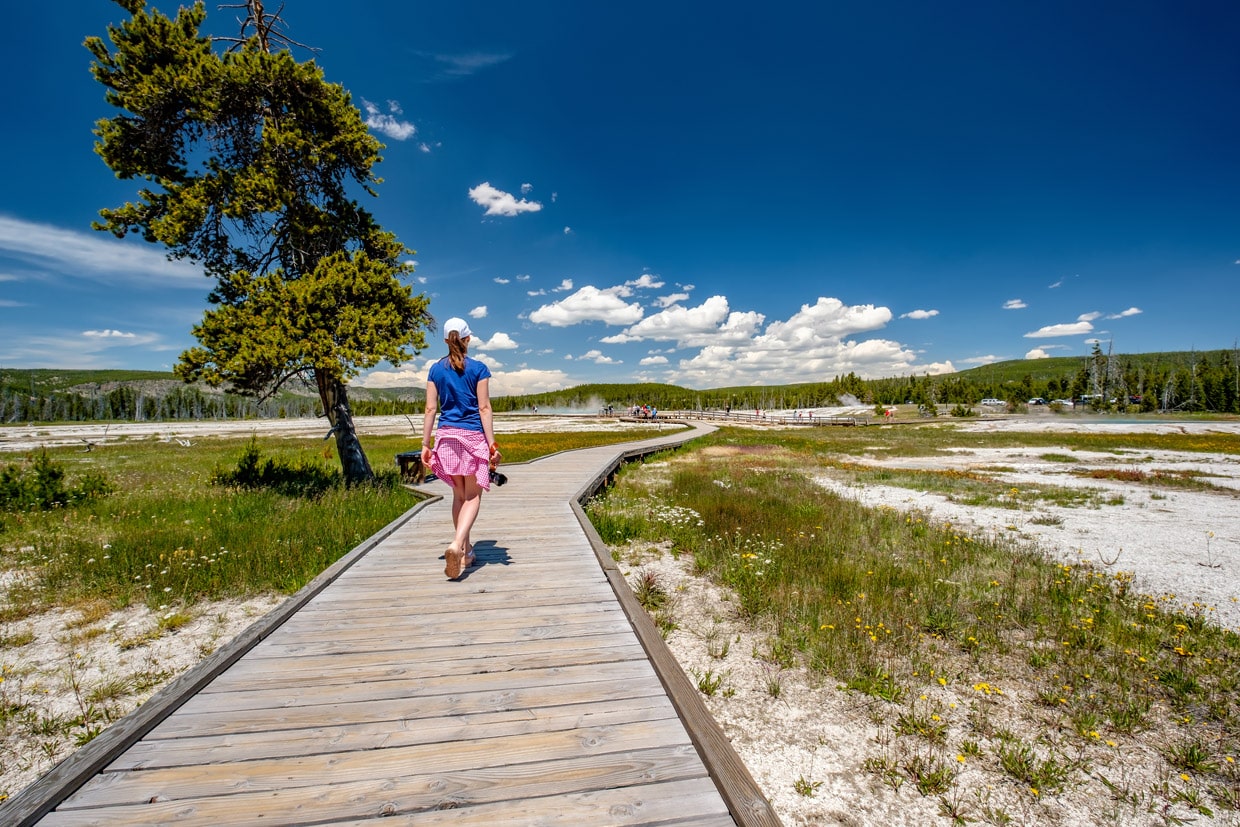