Yangshuo West Street, also known as Xi Jie in Chinese,  is 1400 years old street in Yangshuo county of China. Over 100,000 tourists visit this street every year; therefore, West Street is called “Foreigners’ Street”. This part of town has dramatically changed from a small place to a 517 meters long street filled with different shops and restaurants. (Photo by © David Boté Estrada via Flickr)

Yangshuo West Street, A Mixture of East and West

Today, the street is the most prosperous area in Yangshuo in which, you can find many stores and restaurants. Yangshuo West Street has the style of southern China; however, it also demonstrates an international vibe for visitors. The shops on this street are usually decorated with colorful light, palm leaves, etc.

Yangshuo West Street is, by definition, a nice mixture of Western and Chinese elements. The buildings in this street resemble the architecture of north Guangxi with a focus on the Ming Dynasty and Qing Dynasty styles. Slope roofs, Chinese tiles, white walls, and balconies are all Chinese parts of this mixture. On the other hand, most of the cafes and bars on the street have benefited from the European architectural style.

As a large number of tourists visit this area annually and a great deal of the establishments in the area have English texts on their signs and boards. Additionally, many of the waiters, storekeepers, ordinary citizens, and even some older people can communicate in English.

The eastern end of Yangshuo West Street reaches the famous Li River. When the sun goes down, the restaurants and cafes there would get crowded with people. 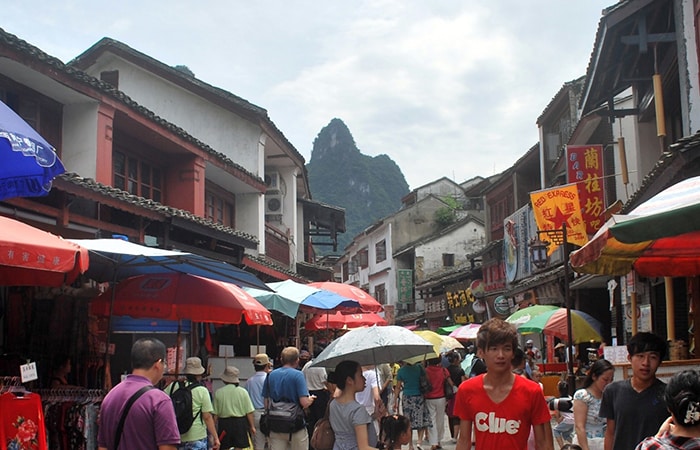 There is an old Chinese poem about the scenery of Yangshuo. The poem describes the area as some scattered houses located at the Bilian (Green Lotus) Peak foot, but that is long gone. Yangshuo West Street has a history of over 1,400 years, which makes it the oldest street of the town.

It was not much populated by tourists until in the early 1970s; however, it became a kind of tourist attraction in China over time. It also gradually became the place to have a rest when you need to get away from the noises of the city.

In fact, in the early 1980s, there were a lot of foreign backpackers who visited Yangshuo in the form of self-help tourists. Most of these travelers stayed for three to four days, but some remained there for up to a year. Some of the low budget travelers still can get a job in the area so that they can extend their stay and enjoy the scenic area of Yangshuo more.

What to buy in the street?

You can find anything you want on West Street! Painting and calligraphy stores, craftworks shops, cafes, backpack shops, and many others are available here. Many clothing products such as silk cloth and tiny shoes from ancient China is sold here.

In the restaurants and cafes of the street, you can find special foods from all over the world. Ciba (Chinese rice cake), rice noodles, authentic Italian coffee, Western-style food, and many other kinds of coffees, cakes, foods, etc. are presented in the street. Trying Beer Fish is highly recommended here because of its special taste and delicate sauce.

Also, MeiYou Cafe, Anne’s Art Cafe, and Paris Cafe are the most popular cafes in the street.

Interestingly, over 20 shops in this street have been opened by foreigners. That is one of the reasons behind the famous name “Foreigners’ Street”! At the time of your accommodation in Yangshuo, never forget to enjoy shopping in this street and share your experience with us. Also, make sure to send us your questions about the street so that our professional guides reply as soon as possible.