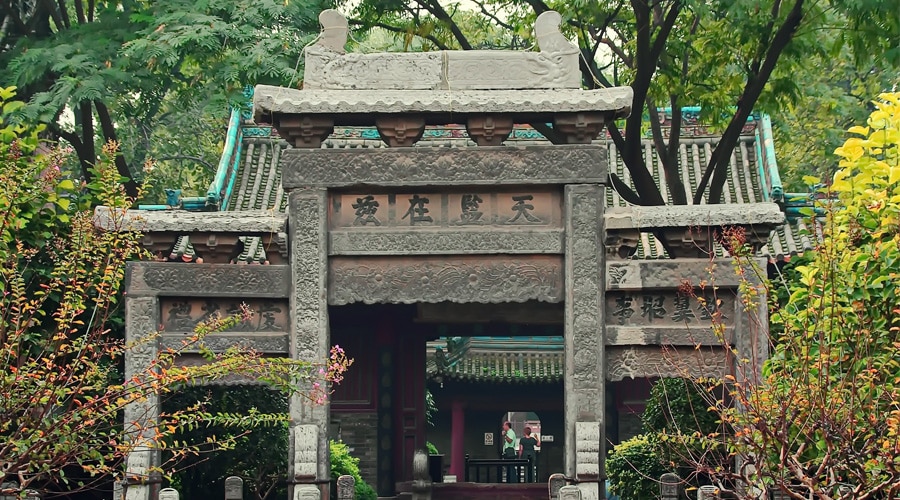 The Xian Great Mosque is the best-preserved and the most famous mosque in china displaying a combination of traditional Chinese and Islamic architecture.
July 21, 2022

Xian Great Mosque is the largest mosque in China. It’s a sacred place representing a mixture of Chinese and Islamic architecture. The mosque is still being used as a place for praying mostly by Hui people and other Chinese Muslims.

In fact, if you didn’t know where you are, you might think you are inside another temple rather than an Islamic mosque. When you see Xian Great Mosque, you can see that even the minarets are like Chinese pagodas. The only things that could intrigue your suspicion are the Arabic carvings. (Video Credit: Walkabout Asia)

The History of Xian Great Mosque

Xian Great Mosque is rather old dating back to the 8th century under the rule of the Tang Dynasty. Although the mosque was founded back then, the remaining parts today are mostly from Ming and Qing Dynasties.

The Tang Dynasty era was a period filled with peace, trade, influx, and freedom of religion. Xian Great Mosque was built in this period because people from the Middle East had a very good chance of trading, traveling, and relocating to China.

Inside the mosque, you can find some hand-written copies of the Holy Quran which date back to the Qing Dynasty. Also, there is a picture of “Mecca”, a Muslim city in Saudi Arabia, as well as around 20 inscriptions written in Arabic and Chinese.

The architecture of the Xian Great Mosque

Xian Great Mosque is a complex with different sections inside. The area includes four courtyards and occupies around 129,000 square feet (12,000 square meters).

Added to wishlistRemoved from wishlist 1
Add to compare
From: $529.00

If you have the chance to see this beautiful Chinese treasure from a close distance, you can understand the Arab influences. These influences start from the central minaret, which has the same look as a pagoda to the astonishing turquoise-roofed Prayer Hall (unfortunately not open to non-Muslim visitors) at the back of the complex dating back to the Ming dynasty.

Another interesting point about Xian Great Mosque is the direction it faces. Usually, buildings face south in China, but Xian Great Mosques, like almost every mosque in the world, faces the holy city of Mecca and in this case, to the west.

Xian Great Mosque is also a very beautiful place in spring when the magnolias are blooming in white and pink. The mosque can be considered a true haven of solitude and an oasis of tranquility located in a crowded area of the city.

Xian Great Mosque is a sanctuary for Muslims, but as you know already, it features classic Chinese temple features too.
These features include:

Deep inside the Xian Great Mosque

Xian Great Mosque has four courtyards inside and when you enter the first courtyard, you can see magnificent dragons.

The gardens with their beauty, add to the mosque’s tranquil environment. The names chosen for the courtyards contribute to the tranquility of the Xian Great Mosque complex. The names are Qing Xiu Dian (Place of Meditation), Xing Xin Ting (Pavilion for Introspection), and Sheng Xin Lou (Tower of the Visiting Heart).

In the first courtyard, there is a 17th-century ornate wooden arch that is around 29.5 feet (9 meters) tall and covered with Chinese glazed tiles.

Besides architectural magnificence, Xian Great Mosque also has some rare calligraphic and textual gems too.

There is a prayer hall from the Southern Song Dynasty Near the third courtyard named Chixiu Hall. Here you can see Islamic stele in multiple languages including Arabic, Persian, and Chinese.

The third courtyard or “Place of Meditation” has the mosque’s tallest tower inside. This tower, also known as “Pavilion for Introspection” or “Tower of the Visiting Heart”, has a height of 33 feet (10 meters). This octagonal structure has two functions, the minaret of the mosque and also a pavilion to watch the moon.

When you enter the fourth courtyard you will face a hexagonal pavilion named “Phoenix Pavilion” which looks like a phoenix with its wings spread toward the sides. If you visit the halls near this area, you can find they are filled with furniture, sculptures, Arabic calligraphy, etc. all preserved like a museum.

If you continue your path from the Phoenix Pavilion you will reach the large turquoise-roofed Prayer Hall left since the Ming Dynasty, This area is about 14,000 square feet (1,300 square meters) and is filled with hanging lanterns and Chinese plaques which show the Islamic belief.

Inside the mosque will leave you in awe. Here you will see another mixture of Islamic architecture and Chinese one. You can even see verses of the Quran in both Chinese and Arabic which is a scene not to be missed.

The Xian Great Mosque is something one of a kind and is recommended to those who value art, culture, and history of different nations.

There is an engraved stone tablet inside Xian Great Mosque which states it was built in 742 during the Tang Dynasty (618-907). The reason for building the Xian Great Mosque lies in the commercial exchanges that the Chinese had with people from the Middle East.

So these commercial exchanges led to cultural exchanges and Islam started being introduced into Northwest China. Most of this happened by Arab merchants or other travelers from Persia (modern-day Iran) and Afghanistan in the mid-7th century.

When these people came to China, some of them settled down and married a woman of Han Nationality. These immigrants’ descendants later became Muslims today in modern-day China. Muslims had a crucial effect on the unification of China, especially during the Yuan and Ming Dynasties.

If you are curious about the course of history and its events, you can find some known Chinese figures who come from this line of events like the beloved national Chinese figure, Zheng He whose ancestor was Ajall Shams al-Din Omar from the city of Bukhara in modern-day Uzbekistan.

The great mosque is located in a district called the Muslim Quarter, which is inhabited by over 20,000 Muslims. In this area, you can find many other mosques as well as Muslim food and souvenir markets. So, at the time of visiting Xi’an, don’t forget to take a look at this amazing mosque and share your ideas with us. Besides, rest assured that your questions will be replied as soon as possible in the comment section.