Wukang Road, aka Route Ferguson, is a historic road in Xuhui district of Shanghai with 1.71 km of length containing 37 officially protected historic buildings.

Wukang Road, originally named “Route Ferguson”, is one of the most famous cultural and historical streets in Shanghai. There are many European-style buildings here mostly built in the early 20th century. These buildings were home to many known figures. There are also numerous shops on Wukang Road such as fashion shops, restaurants, and snack bars.

This road runs from Huashan Road to Huaihai Middle Road, and it is situated in Former French Concession. The road is around 1.17 km (0.73 miles) long and it has 37 officially protected historic buildings inside.

As you walk alongside the road, you can see a vast range of architectural styles such as English, French Renaissance, Mediterranean, and Art Deco. This neighborhood is characterized by its quiet streets lined with lovely trees. Because of unique characteristics, it is a favorite street among Shanghainese. As many new restaurants and cafés work here, Wukang Road has drawn many local and international visitors. In some cases, visitors wait up to an hour just to taste an ice-cream.

The primary purpose of building this road was to make it easier for students and educators to get to the Nanyang Public School (today’s’ Shanghai Jiao Tong University). It happened in 1897, and the whole construction of the road is a work of an American educator, John Calvin Ferguson. He was the president of Nanyang Public School, and he covered the expenses from his salary.

To honor this great man, the road was called Route Ferguson. In 1907, the French Concession government paved and broadened it. In 1943, the name of the road changed to Wukang Road, after Wukang County. However, its original name is still popular among the locals.

Tang Shaoyi, who served as the first Premier of the Republic of China in 1912 for a brief period, purchased a house here in 1937. This house is where he retired and it is still there for visitors to see in No. 1, Lane 40. As the Imperial Japanese Army invaded Shanghai and occupied it in the following year, they tried to recruit him to play as a pro-Japanese puppet government head. Due to the fear of accepting this offer, Tang was assassinated by the Kuomintang at his home. 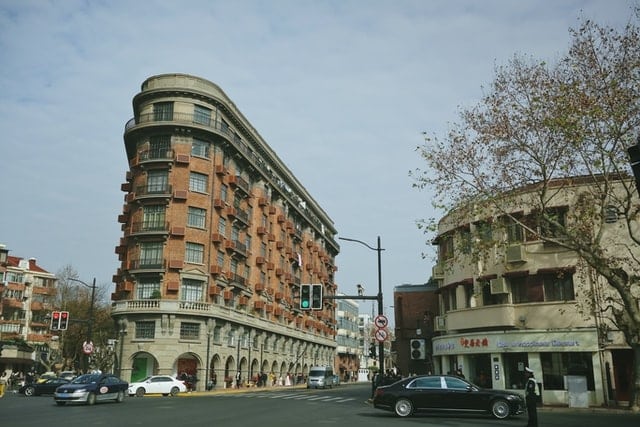 The Wukang Mansion, also known as Normandie Apartments, is located at the Wukang Road southern end and on the Middle Huaihai Road corner. It is a protected historic building designed by the famous Hungarian-Slovak architect Laszlo Hudec (1893–1958). The Wukang Mansion represents the architecture of the French Renaissance. The construction of the building finished in 1924.

This place has been home to many celebrities such as renowned actors Wu Yin, Sun Daolin, Qin Yi, Wang Renmei, Zhao Dan, Shangguan Yunzhu, Wang Wenjuan, and director/actor Zheng Junli. President Sun Yat-sen’ widow, Soong Ching-ling has also lived here at the end of Wukang Road right across Huaihai Road. Her home is known as the Soong Ching-ling Memorial Residence now, which is open to the public.

It has become a popular place on Wukang Road. Locals say that Farine has the best croissants in Shanghai. They are made of fine flour by excellent bakers. Other than croissants, they also have delicious and beautiful desserts.

This is a fast-food restaurant with an American-style. They specialize in American fast foods like hamburgers, french fries, and soda. This restaurant also has a fantastic design, which has made it so popular. The interior decoration is filled with a flavor of retro that would take you back to the 1960th in the United States with brown leather sofa and bright lake blue tabletops!

It is an ice cream shop, and it is an acronym for “What Is Your Flavor.” They provide different flavors of ice cream such as raspberry, strawberry, chocolate almond, and sea salt caramel. Though the flavors here are not very diverse, WIYF ranks among top ice cream shops on Wukang Road with their ice cream cones made in the shop.

Catie Lo is a fashion shop representing a mixture of cute style and retro. This shop has exquisite accessories and stylish dresses. It features wrought iron decorations and a graffiti facade in the shade of the trees.

The importance of Wukang Road is significant for Chinese and it has been classified as a National Historic and Cultural Streets of China in 2011. Do you have any more information to add? Feel free to leave your comments for us! Also, if you have any questions about Wukang Road, you can send them using the comment section and our professional guides will reply as soon as possible.