The whole Wenshu Monastery faces south and the buildings on its central axis are Hall of Three Sages of the West, Mahavira Hall, the Four Heavenly Kings Hall, the Buddhist Texts Library, and Dharma Hall.

Wenshu Monastery, also known as Manjushri Monastery and Wenshu Temple, is one of Chengdu’s best-preserved Buddhist temples. It sits in the Qingyang District of Chengdu in Sichuan and home to the Buddhist Association of Sichuan Province and Chengdu City. Here, TripWays is going to introduce Wenshu Monastery from different aspects. (Photo by © Einar Fredriksen via Flickr)

According to Legends, the temple was originally built during the Sui Dynasty (581 to 618) by one of Princess Yang Xiu consorts, son to Emperor Wendi. Later during the Five Dynasties and Ten Kingdoms to China (907 to 960), the temple name changed to Miaoyuan Tayuan. The name changed again during the reign of the Song Dynasty (960 to 1279) to Xinxiang Temple.

The temple experience a heavy fire during the end of the Ming dynasty (1368 to 1644). It was told that the fire consumed everything in the temple except ten iron statues of Buddhist deities and 2000 years old fir trees.

When the Qing Dynasty came to rule (1644 to 1911), the temple situation got better. In 1681, during the time of Emperor Kangxi, master Cidu visited this place and constructed a thatched cottage. The temple was renamed for the last time then and it was named Wenshu Monastery, the name we still know and use.

In 1697, rebuilding and renovations of the buildings started and by 1706, it was completed. The flourishing era of Wenshu Monastery was during the reign of the Qing Dynasty Emperor Jiaqing (1796 to 1820) and his successor Emperor Daoguang (1820 to 1850) when abbot Benyuan largely expanded it.

After the revolution of China and the establishment of the Republic of China, when the country was fighting the Second Sino-Japan War (1937 to 1945), some Buddhist masters such as Taixu, Nenghai, and Foyuan successively lived in the monastery and promulgated Buddhist doctrines. Since 1983, the State Council of China listed Wenshu Monastery as a National Key Buddhist Temple.

What is inside this monastery?

The Hall of Three Sages of the West

This hall has three statues of the Three Sages of the West; which are namely Amitabha, Mahasthamaprapta, and Guanyin.

The hall has the Statues of Four Heavenly Kings situated on its opposing side. There is also a statue of Maitreya in this hall and the statue of Skanda at the back of it.

The roof has a height of around 10.5 meters (34.5 feet) and houses a sitting statue of Sakyamuni in the center of it. There are also two statues of Kassapa and Ananda on the sides of the Sakyamuni. These statues were cast in the Emperor Daoguang era in 1829.

The Dharma Hall is located behind the Mahavira Hall. This Hall enshrines statues of Bhaisajyaguru (known as Medicine Buddha) and his Twelve Heavenly Generals on both sides of the hall.

There are some artifacts and relics inside the monastery. One of them is a finger bone of the Sakyamuni Buddha which master Nenghai had brought from Bodh Gaya in India. The other is a parietal bone relic of Chinese famous Buddhist monk, Xuanzang. They say this relic is from Nanjing Bao’en Temple in Jiangsu. 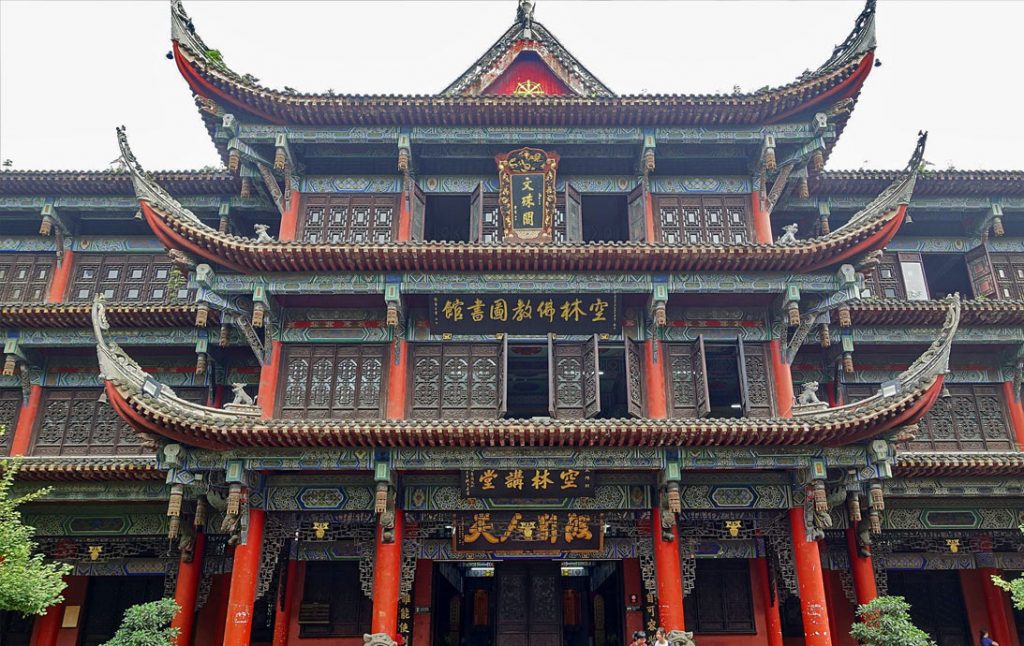 How to reach Wenshu Monastery?

You can get to the Wenshu Monastery by bus and Metro

Get on Line 1 and leave at Wenshu Yuan Station.

Visiting the Wenshu Monastery is free of charge and it is open from 8:30 AM to 5:30 PM.

In each journey, you should be aware of many things like tourist traps; so, if you are planning to visit China, don’t forget to be informed about tourist traps in this country!

The Splendid Baobabs and Tsingy