Wat Arun in Bangkok – Temple of Dawn in Thailand

Bangkok is home to many unique temples, many of which are built following historical, religious, and spiritual events. Wat Arun also called the Temple of Dawn, is the most popular temple in Thailand’s capital city. Despite its full name being Wat Arun Ratchawararam Ratchaworamaha Wihan, it is generally known by locals and tourists as Wat Arun.

This temple is on the west side of the well-known Chao Phraya River of Thailand. On the other side is the famous Wat Pho and also the Wat Phra Khao. Arun is the first place in Bangkok in the morning to receive the radiation of sunlight from the east of the Phraya River, which is why it is called Pagoda of the Dawn.

Wat Arun has historical roots dating back to the Ayutthaya era. At that time, it was renamed Wat Makok, which means the olive temple. Aruna, the Indian god of dawn, is credited with giving the temple its name.

Wat Arun came to be constructed by Taksin, King of Thailand, in 1768. According to legends, the King was driven away from the destruction of the capital city of Ayutthaya by the Burmese invaders to a sanctum in the dawn. Years Later, King Taksin moved his new capital city to this place, which was called Thonburi.

It is interesting to know that the temple was once on the ground of the old Royal Palace. Formerly, Wat Arun was the place where the Emerald Buddha sculpture was kept and regarded as the national-religious symbol in Thailand. In the 18th century, his son Rama I moved the temple and the palace to the opposite side of the Chao Phraya River.

Intending to develop Wat Arun and add features to it, Rama II invited monks to stay there and build features for the temple. As a result, several stupas, including the central tower, which stands over 70m tall, were constructed. Building the temple took place between 1824 and 1851 when King Rama III (reigned from 1824 to 1851) was in power.

The Visual and Architectural Characteristics of the Temple

Mount Meru is the center of the universe in the beliefs of Buddhism, and it is represented by the four points of the four-cornered Wat Arun temple. It is widely believed that Hindus and Buddhists regard Mount Meru as the center of physical and metaphysical universes.

People of the ancient world in Thailand believed that the four towers represented the four directions of the guardian gods. Temple’s architecture is exact and sophisticated, down to the smallest detail. When the temple’s towers are exposed to the sun’s light, colorful glass pieces covering towers radiate an array of vibrant colors.

Also, the remains of King Rama II are buried here in Wat Arun. There are paintings depicting Prince Siddhartha, who is also called Buddha Shakyamuni, on the temple walls. On account of its architectural features, Wat Arun’s highest tower is considered an important symbol of Bangkok.

The 70m high tower is embellished with Chinese ceramics and glass and is a popular place for tourists to take unforgettable photos. The temple has a unique perspective on the magnificent Royal Palace, the majestic Chao Phraya River, and the sacred Wat Pho temple. 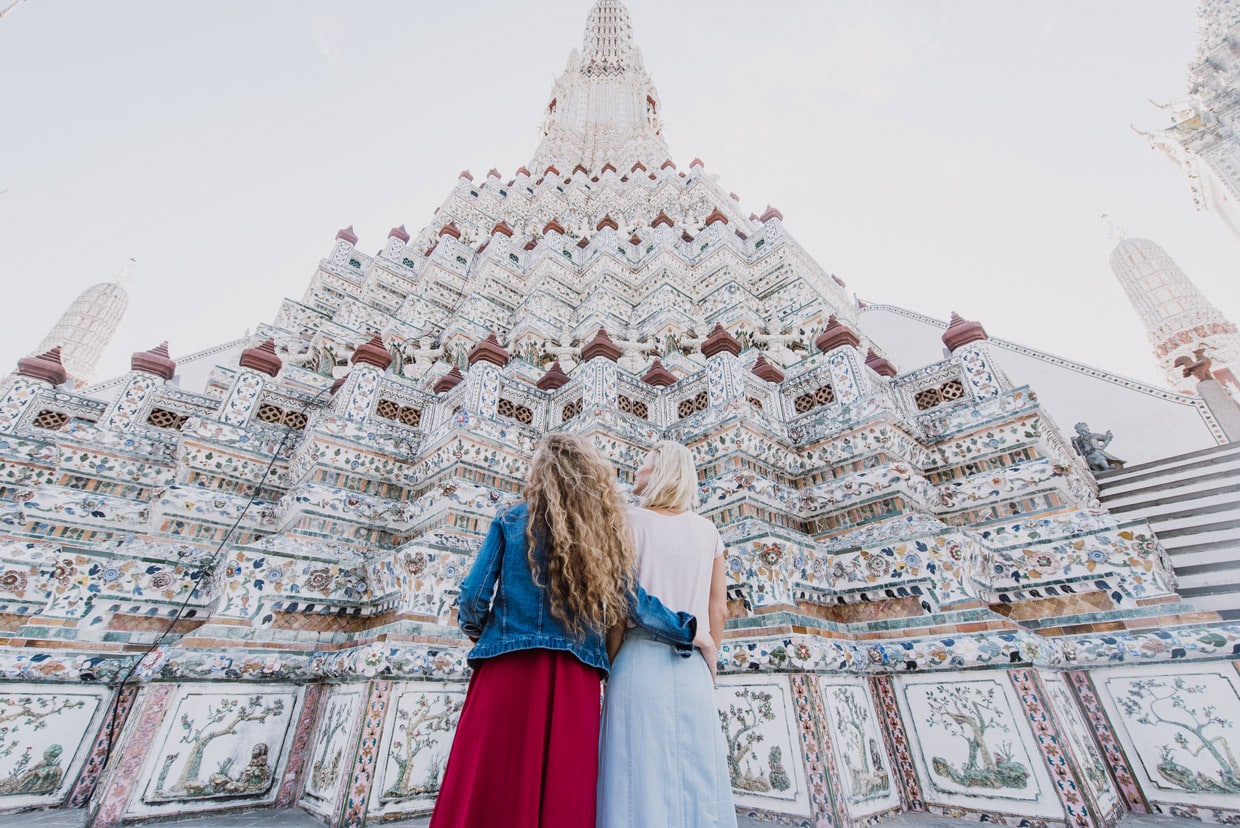 How to Get there

Located directly opposite to Wat Pho, which is next to the Grand Palace of Thailand, Wat Arun is just a short distance outside of Bangkok City on the opposite side of the Chao Phraya River. In the same area as Wat Arun is the Thonburi Grand Palace.

Here Are a few ways to get to the temple. Each has its advantages and disadvantages. See what satisfy your needs best:

A combination of Ferry and Subway

To travel more quickly and have more fun, the best way is to combine the subway with a ferry boat. Step out of the metro at Sanam Chai Station and walk 850m to the Tha Tien Express Boat Pier. The Chao Phraya River boat trip costs THB 4 for each person and crosses to the other side. You will find the temple grounds on the left after you get down.

A combination of Taxi and Subway

There are direct metro lines that cross the Chao Phraya underground, so you do not necessarily have to take a boat if you do not want to. You can take a tuk-tuk on the short ride to Wat Arun from there.

There is also another option for those who want an explicit schedule for their trip and prefer to see nearby attractions with a tour guide and a prepared plan. You can choose a group tour or a private one just for you and your family. Day trips for visiting Wat Arun and nearby places may include: 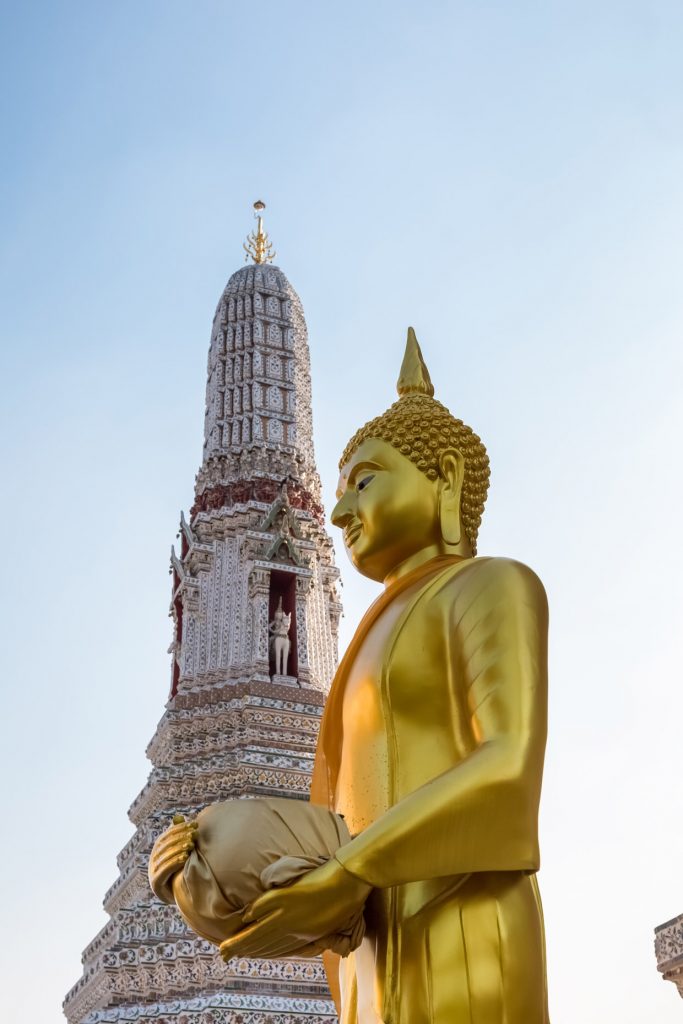 We suggest you visit Wat Arun early in the morning or late afternoon when it is quietest and most peaceful.

The Entrance of the Ordination Hall

The famous passage with the crown and the doorway to Ubosot is a great place to capture amazing photos of Wat Arun. The two enormous sculptures, the Yakshas, ​​are meticulously embellished and lead visitors to the ordination salon of the monks. If you get there early, there will not be many visitors, and you can enjoy visiting this place all in quiet and peace.

It is said that this area is the most sacred section of Wat Arun. It has well-decorated corridors with numerous Buddha sculptures. You can take lots of photos here. The courtyard, which is wholly covered with marble, is another attraction to be seen at the temple. There are several Chinese stone statues depicting lions, dragons, warriors, and other legendary figures.

Among the more prominent Wat Arun landmarks is the Phra Prang, a temple tower with a height of 70 meters, resembling a stupa. Its blazing colours can be seen even from a distance in the midday sun. Throughout this white tower are stunning mosaics of shells and porcelain, which create thousands of patterns similar to flowers. Visitors were once permitted to enter the temple through steep stairs. Despite being forbidden to climb the temple roof today, visitors can still view the Phra Prang.

It is an extraordinary experience to watch the sunset at this temple. You will find several rooftop bars and cafes from where you can see the beautiful sunset on the other side of the river. On the roof terrace of the Sala Arun hotel, one of the best rooftop bars in Bangkok, you will have the absolute best view of Wat Arun and the sunset. 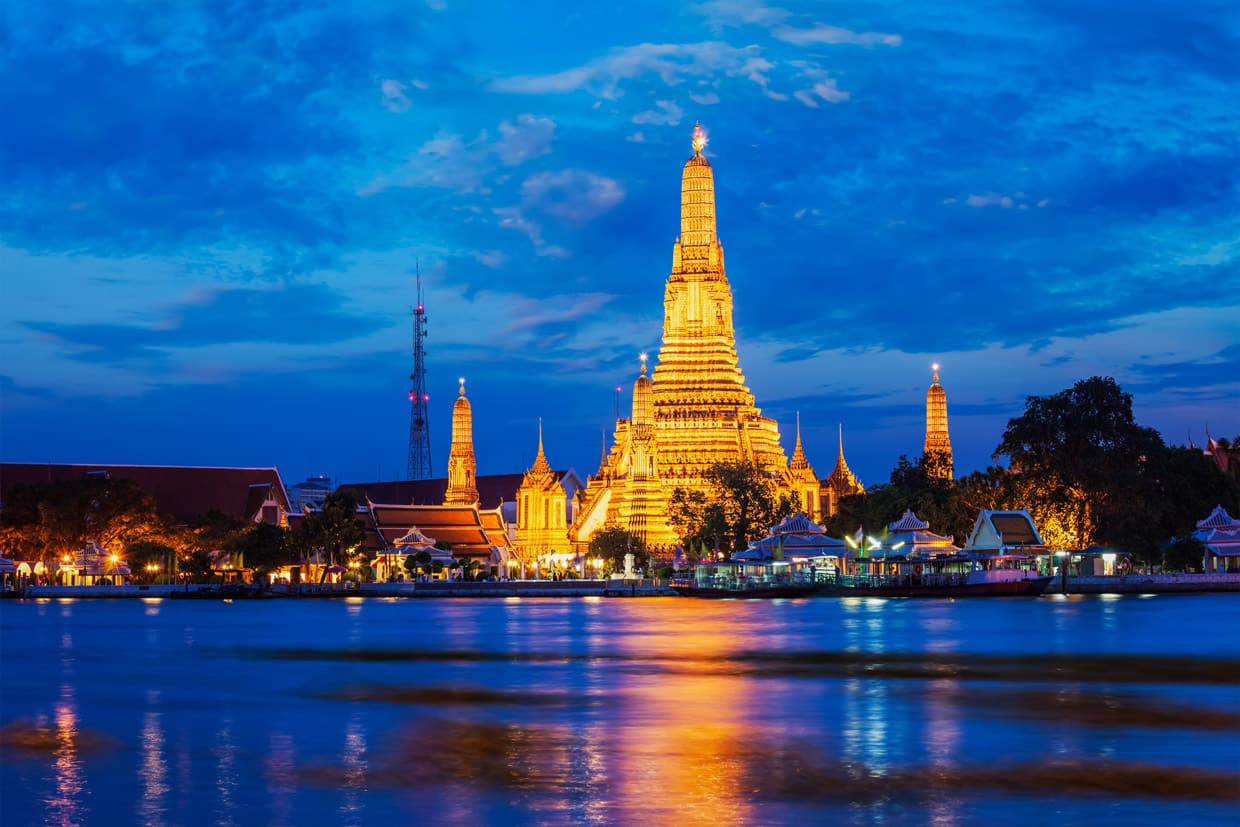 For having a stunning view of Wat Arun at the time of sunset, you should reserve a table at a bar or restaurant on the opposite side of the Chao Phraya River. Vivi, the coffee place, is an open-air, cozy, and affordable cafe with a great view of the temple. Nevertheless, The food is not of excellent quality.

If you wish to see the view of the temple while drinking and enjoying the comfortable atmosphere, you can find the Eagle Nest rooftop bar on top of the Sala Arun hotel. Additionally, at the bar, you will have a chance to view a panoramic view of the Reclining Buddha Temple (Wat Pho) as well as a great view of a group of four large stupas.

From this place, you will have a fantastic view of the Chao Phraya River and Wat Arun. Here you can order foods (including Steak) that are prepared on a charcoal grill. Also, you can enjoy a variety of delicious dressings.

A private dining room with a capacity of 20 to 25 seats is available each day. The staff is friendly and professional. The Bitter deck restaurant serves the guests From 11:00 am to 09:00 pm.

You can have an extraordinary view of the temple from this place. The food is excellent, and the service is fast and professional. They have two comfortable-sized air-conditioned rooms on either side of the balcony for those who prefer extra comfort.

Dinner On a Cruise

A popular option for enjoying a sunset on the river is to book an evening dinner cruise. You can take a traditional rice barge cruise or a more upscale one on a smaller, more private vessel. Cruises offer a variety of buffets, including Thai cuisines, foods from India, and continental dishes. You can enjoy your meal while the live music plays. Also, they offer dance music along with other options.

You could spend a wonderful evening at Supanniga Tha Tian along the Chao Phraya River with friends. You can enjoy a picturesque view of Wat Arun and the river. Also, you can order a variety of foods, including fried Chinese Cabbage with soy sauce, Tom Yam Kung, and Massaman curry.

You will find the atmosphere friendly and the staff intimate and professional. If you are interested in dining and drinking on the rooftop, do not forget to book a table in advance.

Guests will feel comfortable here because of its warm and cozy ambiance, as well as the efficient and friendly service. The prices are affordable. 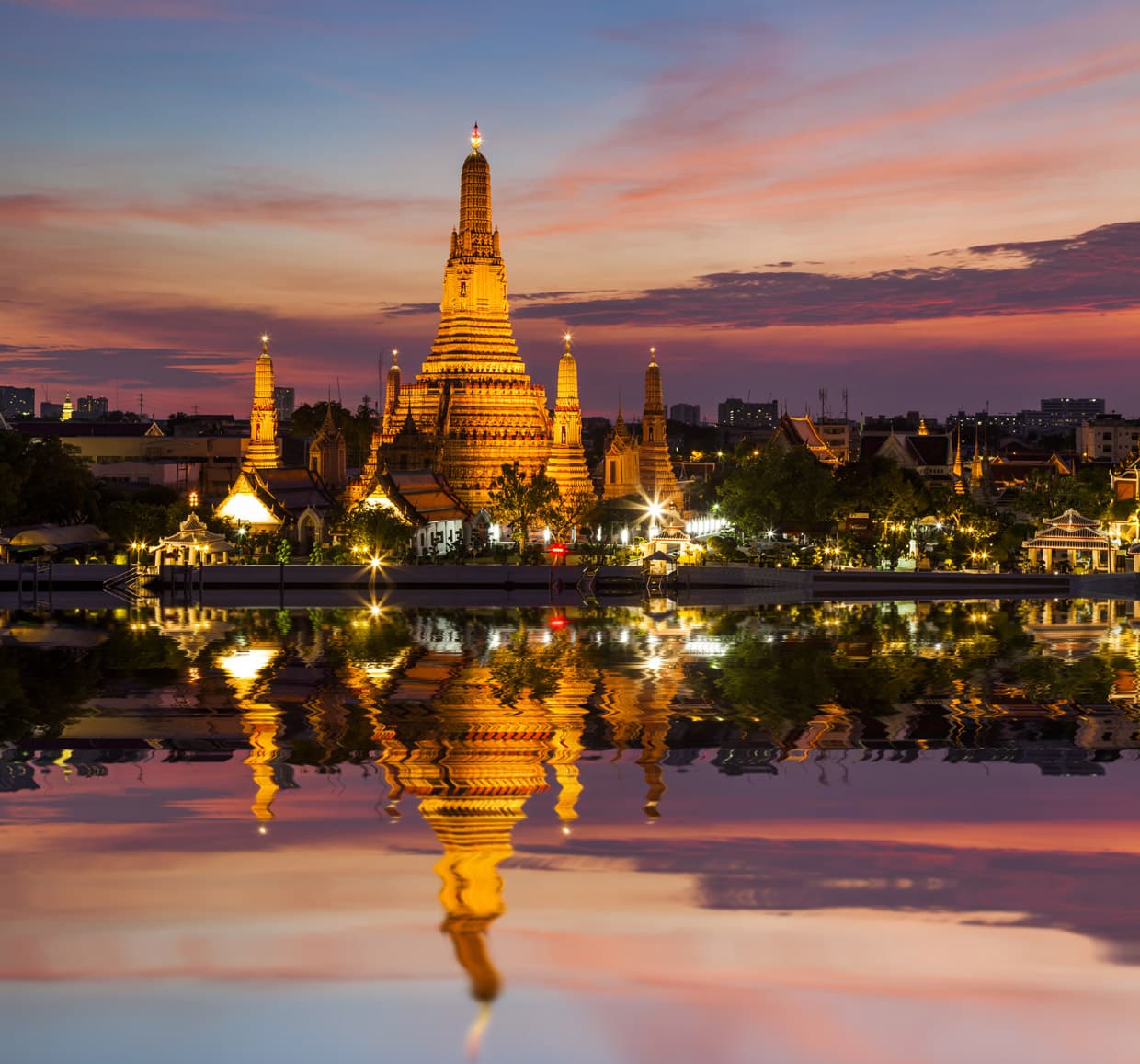 It is free to enter Wat Arun, but if you would like to visit Phra Prang, it costs 50baht per person.

Pieces of Advice Regarding Clothing in Wat Arun

Wat Arun is an important place. Not only because of being an important tourist attraction But also due to its religious function among locals. Because of this, you should wear appropriate clothes. Dresses and shorts must cover you up to the knees. Shoulders should also be covered. An additional scarf or sarong can be used to do so at the moment.

It’s okay to take pictures around the monastery, but you have to ask politely. Make sure to ask monks if you want to take photos of them. It would be best if you treated them with respect and not like friends. 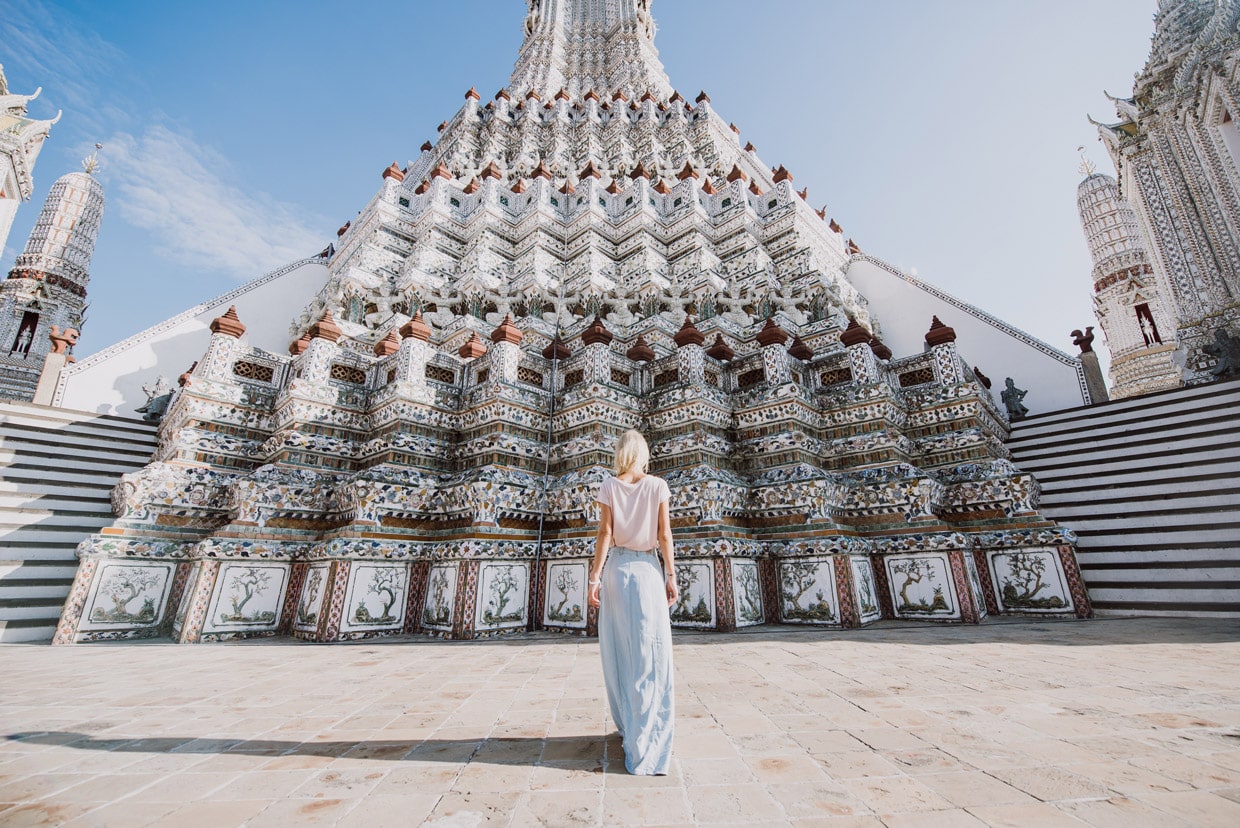 Nearby Temples to visit

The Wat Pho temple covers 80,000 square meters, which makes it the biggest temple in Bangkok. A statue of Reclining Buddha, 46 m long and 15 m high, sits at the core of this temple.

Among Thailand’s oldest temples, Wat Saket also attracts numerous tourists each year. Wat Saket contains several Buddhist paintings within its ordination hall. The core of the temple is the Golden Mount, a hill topped with a large stupa. From here you can have a great view of the entire Bangkok.

Wat Traimit is located in Chinatown. It is home to the world’s most massive golden Buddha sculpture. It is worth seeing it while you are in Bangkok.

Near Wat Pho and half a kilometer from the Grand Palace, Museum Siam is located in the old Bangkok district. Sanam Chai is easily accessible from one exit of the Sanam Chai metro station. Through interactive games and modern technology, the exhibition displays a transformation from the past to the present of Thailand and its connection with nearby countries. The Museum Siam itself is dedicated to the question of ‘What does being Thai mean?’

The Grand Palace in Bangkok is located near the Chao Phraya River, opposite Wat Arun on the west side of the river, Wat Pho to the south, and the grounds of Sanam Luang to the north. This place is consistently among the top choices for visitors to Thailand.