Tran Quoc Pagoda is the oldest temple in Vietnam dating back to over 1500 years ago during the rule of Emperor Ly Nam located on an island in the West Lake.

Tran Quoc Pagoda dates back to the 6th century, known as one of the oldest temples of Vietnam and the oldest pagoda of Hanoi. Not only was it named differently, but it has also been relocated over the ages. This particular Pagoda was a favorite place of worship among the nobles even before being relocated and repaired as it has always been one of the most peaceful temples. The reason may be the beautiful architecture, the green and serene gardens, or the sense of spirituality found in many sacred places.

The original structure was built during the rule of Emperor Ly Nam De from 544 – 548 and was named Khai Quoc. It was located on Red River’s shores until the river’s encroachment, which forced the building to be moved. For many years the temple kept its original name until, in the 15th century, King Le Thai Tong changed it to An Quoc Pagoda. In 1615 the Khai Quoc Pagoda was relocated to a new spot, which was perhaps even more enchanting than the old one, in the Ho Tay or West Lake. On the lake, there was a small islet called Kim Ngu or Golden Fish. It was about the same time in the 17th century that the name was shifted to Tran Quoc Pagoda that we know today.

Over the years, the building was well preserved by the monks who lived in the temple and took care of the grounds. Many great monks lived in this Pagoda over the ages to pray and teach others about Buddhism. The ashes of the greatest of these monks still remain in the main Pagoda. It was their efforts that resulted in the construction of the many more Pagodas in the 17th century.

The monks never married or had children. They kept the building mostly intact until it was necessary to make some significant repairs. In 1815, three main areas of the temple complex underwent renovations as well as all the other sections, which needed less attention.

Besides the monks that lived there for centuries and the repairs, several relics and artifacts were added to Tran Quoc Pagoda. Among the most famous artifacts are some statues that were carved out of stone in 1639, all of which have symbolic value.

Last but not least, there was also a more recent addition to the complex was the Bodhi Tree, which was gifted in 1959. It is said that this tree comes from the very same tree that Buddha was enlightened. In any case, this gift came from the president of India, Rajendra Prasad, which attracts many pilgrims and visitors to the Tran Quoc Pagoda. 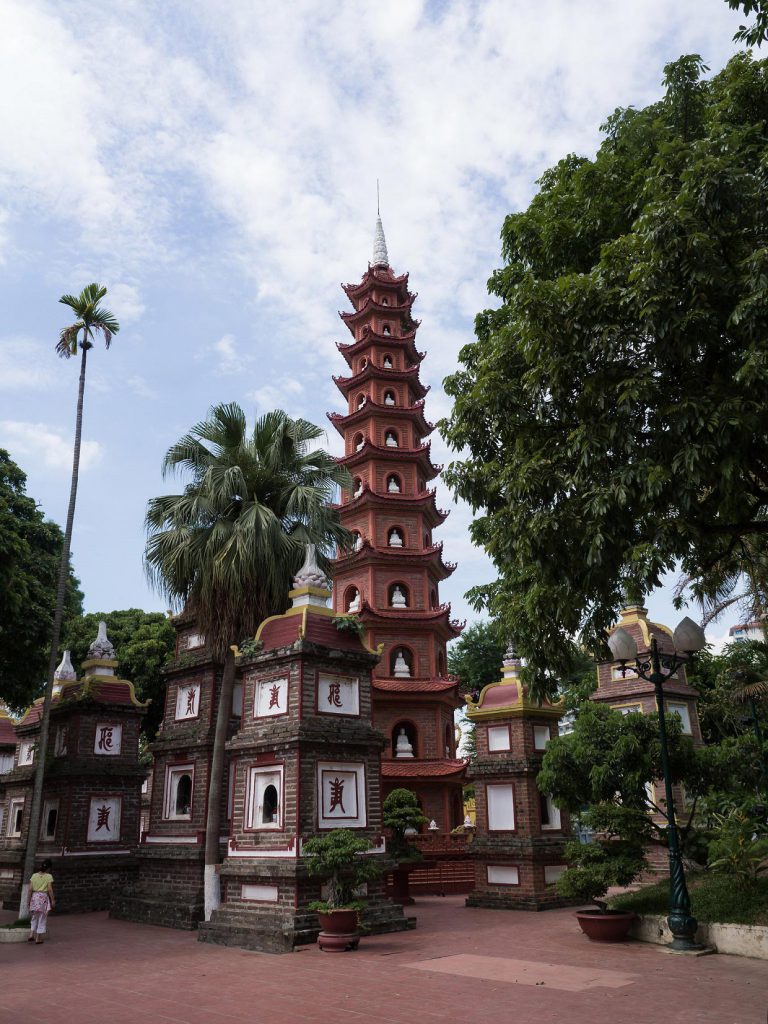 The Architecture of Tran Quoc Pagoda

The temple uses traditional Chinese and Buddhist styles and symbols fit for a Pagoda. The iconic building is constructed to resemble a blooming lotus that is surrounded by several other buildings. The main building is 15 meters high, with 11 stories and six statues on each building level. In the surrounding area, there are three main buildings in which the pilgrims can burn incenses. Symbolically, the visitors are given three scents to burn. If they want more, they will be given an odd number of incenses. The reason for the repetition of odd numbers in this sacred place is the belief of luck behind such numbers.

While Visiting the Tran Quoc Pagoda

If you are a fan of Buddhism symbolism, keep a sharp eye as you will see the pattern of blooming lotuses in the shape and order of the buildings around you. The lotus itself is believed to be the symbol of life and prosperity. All these prosperity and life elements joined together on the small island in the West Lake create the most peaceful atmosphere for all visitors.