Located near Lijiang City, Tiger Leaping Gorge is one of the deepest canyons in the world with a depth of 3,790 meters offering a stunning landscape.

Located in the neighborhood of Lijiang City, Tiger Leaping Gorge has one of the world’s deepest canyon with a great path that is elevated above the Yangtze River. This elevation helps to reduce the deafening roar the river produces and even offers inexpensive accommodations. This factor makes the Tiger Leaping Gorge different from other canyons found around the world, as they do not offer cheap restaurants and hotels along the inner trails of the canyon. (Video Credit: Milosh Kitchovitch)

Since numerous ecological zones converge in this region and coupled with a large climate range, it has become an ecological hot spot thanks to its atypically large amount of varying animal and plant species that exist in it. Tiger Leaping Gorge is a natural and scenic highlight.

Best Price
Added to wishlistRemoved from wishlist 1
Add to compare

Added to wishlistRemoved from wishlist 0
Add to compare
From: $1,272.00

Three Parts of the Gorge

The gorge is segmented into 3 categories called the Upper, Middle, and Lower Gorge. The entire valley measures at about 18 km in length. It stems from the northeast to the southwest. The valley is located between Tiger Leaping Gorge Town (aka Hutiaoxia Zhen or Qiaotou) close to the Upper Gorge, and Daju Town near the Lower Gorge.

This canyon is located close to the source of the Yangtze River, which is China’s most important river and the world’s third lengthiest river. The renowned Upper Gorge scenic areas are located at the gorge’s entrance and Tiger Leaping Boulder Area. Yixiantian and Mantianxing or “Sky Full of Stars” Reef Zone are renowned areas of the Middle Gorge, which also house rapids. The Lower Gorge offers beautiful landscapes around Daju. 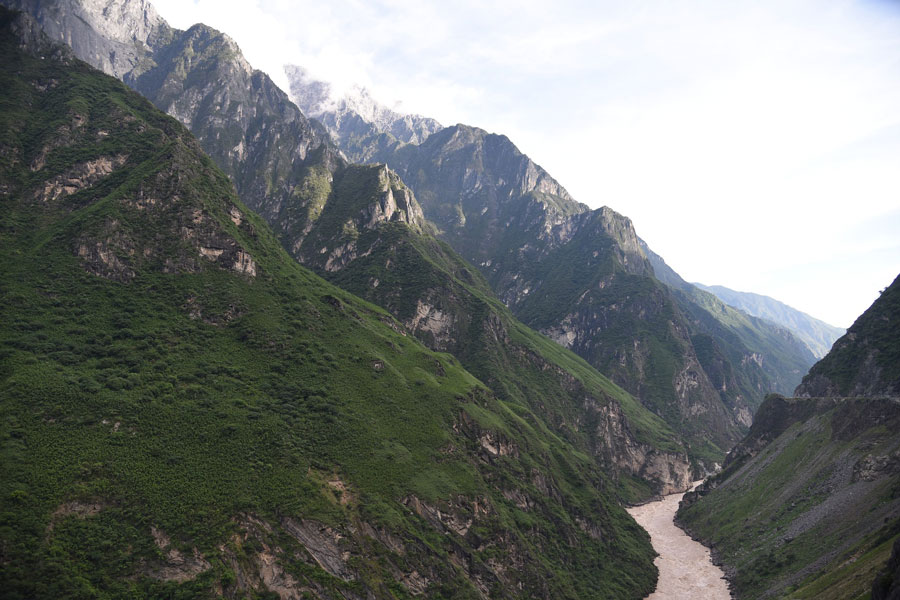 Visitors of the gorge area can tour it using tour buses that travel along the road following the river’s course on the canyon floor. This route is extremely popular with tourists from other parts of China.

This is the primary canyon route, which is well-traveled by local people and hikers alike. Along the trail, there are native inns and houses. This trail is good for those who want to hike a path that offers solitude, as only a couple hiking groups use this trail all day.

This trail points southward, so hikers are treated to sunlight even deep into the gorge. The majority of this trail is at 2700 m. The roars of the river can be heard when it rushes just below the trail. The majority of the trail only rises about 1 km from the river. The trail’s eastern portion is frequently shaded thanks to the peaks, with higher elevations often appearing to be white snow or bare rock.

Numerous tourists prefer to hike Tiger Leaping Gorge while enjoying the breath-taking landscape. Considered to be among the list of China’s finest hikes, the gorge is not strenuous apart from the initial climb at the switchback series near Tiger Leaping Gorge Town.

If visitors prefer to walk the trail slowly, they are able to take advantage of accommodations that are in great shape. The hotels and inns for backpackers on the trail make hiking it very comfortable. Nevertheless, the trail can be strenuous for those who want to hike the entire length in one go or too quickly. With a spectacular view and landscape, backpackers generally prefer to hike this trail.

Despite its extreme popularity in China, it is not one that gets overcrowded. Foreign hikers from Europe, Israel, and America prefer to use the elevated river path. Very few Chinese visitors use this route; however, native people can be seen using this route to graze their herds.

There are two cafes providing western-style foods and internet access for visitors are located in Tiger Leaping Gorge Town; therefore, you should not worry about your emergency needs for the internet or food. Finally, if you have any more information to add or you need more detailed information about the attraction, feel free to leave them in the comment section. Your questions will be replied as soon as possible.