The Grand Palace location wasn't just a random decision. Close proximity to the main artery of Bangkok, the Chao Phraya River, makes defense against possible invasions easier. King Rama, I chose the site for the Grand Palace because of the Chinese community already residing here. Eventually, they were forced to relocate to Chinatown, located outside of the city.

Whenever one visits Bangkok, it is necessary to see the magnificent structures within the Grand Palace compound to understand the grandeur architectural style. The Grand Palace has been used as the symbol of the Royal Thai family since Bangkok became the capital of Thailand by King Rama I. Today, the Royal Family resides at Chitralada Palace, and the Grand Palace serves as a ceremonial venue.

The palace had its construction begin in 1782. It was a critical palace, but it was not considered to be completed until the late 1800s. Initially, the construction of the Chakri Palace was influenced by King Rama I’s belief that the Chakri dynasty also deserved a new palace. A palace used to be home to the Kings and Queens of the country from 1782 until 1925. Currently, it is regarded as one of the most popular destinations in Thailand.

Several areas of the grounds are not open to the public; however, there is still much to see when you visit those open parts. Different historical leaders have built upon the magnificent palace over the past 200 years, transforming it into what it looks like today. In addition to serving as a tourist attraction, the Grand Palace has also served as a ceremonial venue for a period of time. However, royalty is no longer a resident at the palace since 1925. 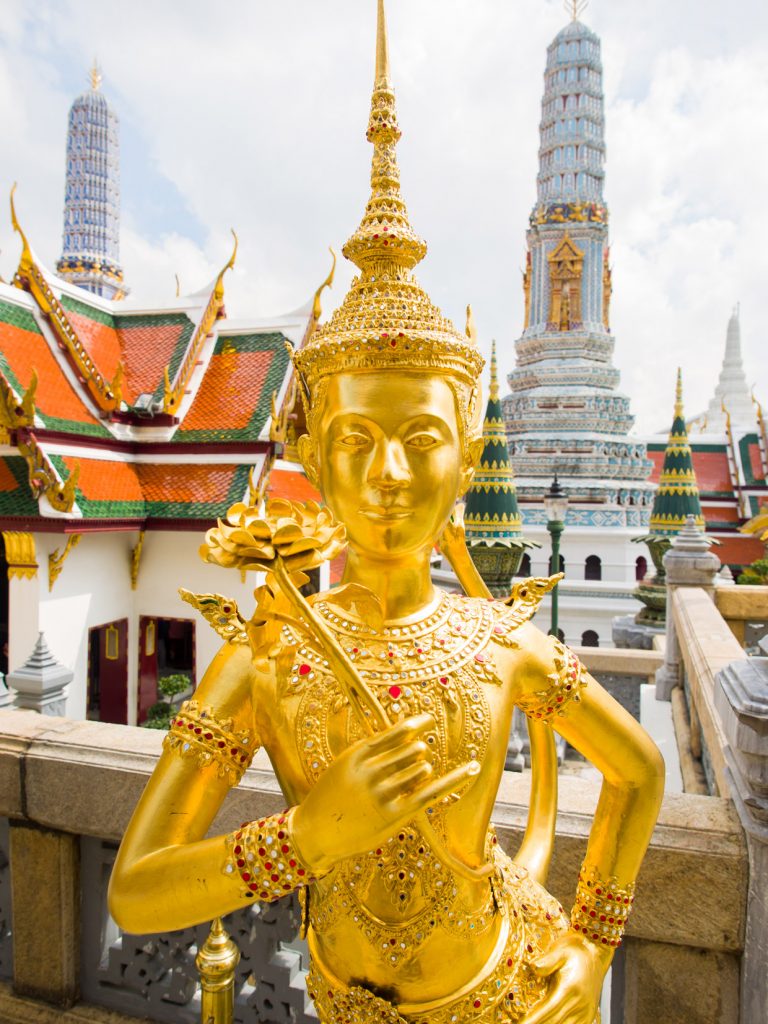 Things to See at the Grand Palace

There are different things to see in this palace. If you want to fully enjoy your time being there, we strongly recommend you read as much as possible about this palace. That would help you have a better time there. Let’s see what you should not miss in this palace.

The Temple of Wat Phra Kaeo or Emerald Buddha

Its entrance is easily identified by the imposing demon figures guarding it. Standing sentinel at the gate of the gorgeous temple is the statue gifts from Chinese merchants. If you can pass by the demons, you will find a cycle of murals depicting a portion of the Ramakien epic poem, which recounts the relationship between gods and humanity. It is believed that inside the gold-tiled chedi, known as Phra Si Ratana, is a relic – either a bone fragment or hair – of the enlightened Buddha.

Sixty-six centimeters tall, the statue, entirely crafted out of jade stone and dressed in gold robes, stands meditating 66 centimeters inside the bot. Experts believe the statue is from Pataliputra in India. However, some sources claim that it was carved in Burma by an unknown artist. It first appeared in Chiang Rai in northern Thailand in 1434, after arriving from Ceylon and Cambodia.

When the statue was discovered, it was encased in plaster. A crack in the casing revealed the figure within, revealing the damaged casing during its transport. Having traveled long distances, the Buddha arrived in Bangkok in 1778 and has been kept there ever since. The king changes the Buddha’s robes three times a year, marking the beginning of a new season during a special ceremony. 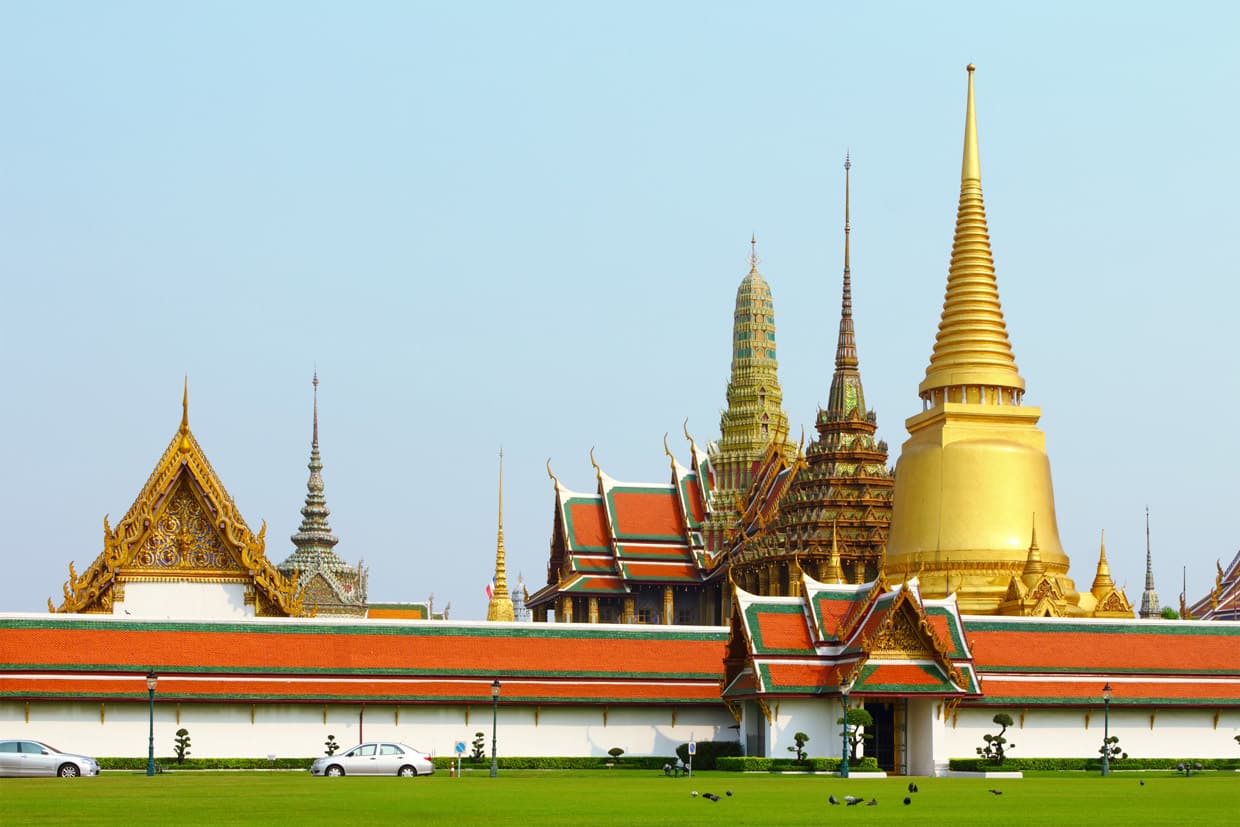 Several kilometers away from Phra Sri Ratana stands Phra Mondop—a three-story structure that features a gold spire and pure silver floors—the Palace library, which houses a series of small mosaics made out of green and gold glass. It also houses several Buddhist publications and ancient literature, including the Canon of Buddha, sacred scriptures written on palm leaves.

However, a walk outside will let you admire the fascinating dragons, mother-of-pearl doors, and Ayutthaya-style architecture, but inside remains closed to the public.

This hall’s original purpose was to serve monks, who would assemble here every day, create Holy water and sprinkle it all over the palace. During the days of warfare, the water was used to “enhance” the power of weapons during a special ceremony that occurred here. The tradition of making holy water was discontinued in the 20th century, but it continues to be performed during Buddhist holy days.

There are life-size statues of Chakri dynasty kings at the Prasat Phra Debidorn building, also called the Royal Pantheon. The building’s original design designated a place to house the Emerald Buddha; however, that plan was abandoned because the construction amounted to too little.

Only on Chakri Day (April 6) can the general public catch a glimpse of the kings; however—the interior is only open to the public once a year. In addition to the golden pagodas, the temple facade includes a row of colorful, life-sized demons that guard the building and make great photo backgrounds.

This replica temple of Angkor Wat is worth visiting even though the real Angkor Wat is an outstanding sight in Cambodia. The stone model is much smaller than the real thing but provides an interesting history lesson and an opportunity to see the landmark as it was planned. When Cambodia was a vassal state of Siam during the reign of Rama IV, this model dates from that time.

Near the Emerald Buddha temple is the mini Angkor Wat, which can be easily missed because it isn’t that big. However, this gray sand model stands out in a colorful environment surrounded by colorful, ornate buildings.

When leaving the Dusit Maha Prasat, the golden and wooden pavilion you see is the Aphorn Phimok Prasat, or the Ruin Chamber of Rama I. Gold-threaded drapes were arranged around the king’s pavilion pillars while he wore his ceremonial robes.

Additionally, this pavilion was used to store the king’s palanquin, a one-passenger human-powered form of transport, a large box or seat carried by six men on long poles. At Dusit Maha Prasat, the king changed before participating in the festivities inside the palanquin.

Historically, Boromabiman Hall is known as the building that once overlooked the lawn on which the king’s annual garden party was held. In the interior are frescoes depicting the four guardians of the universe, Indra, Yahuma, Varuna, and Agni. These ten royal virtues are engraved on plaques beneath: generosity, propriety, readiness to make sacrifices, clemency, modesty, conscientiousness, steadfastness, a sense of justice, patience, right dealing, and non-violence.

In 2016, when King Maha Vajiralongkorn inherited the throne after his father’s death, he moved into the Amphorn Sathan Residential Hall within Bangkok’s Dusit Palace. However, the Great Chakri Palace remains a special sight to see.

A Siamese king ordered that the residence be fitted with typically Siamese stepped roofs and Mondhop, originating with an English architect and designed in an Italian Renaissance style. Designing the building in such a way makes it stand out from what surrounds it while also making it seem more important and royal. As a result, every room in the palace is a treasure trove of paintings and valuable portraits of every Thai king, not only for their beauty but also for the superior quality of their interiors.

There is a peristyle in front of the building, which is where royal proclamations were read. It is referred to as a throne room. The hall is still used today, often for ceremonies involving heads of state or coronation anniversaries.

To Reach the Grand Palace

You’ll enjoy going to the Grand Palace more if you do it on your own than if you deal with drivers who persistently try to sell you stuff.

Get off the streets, and take advantage of the water. River taxis are relatively inexpensive. Furthermore, this will provide an excellent opportunity to see the Chao Phraya River up close. The advantage of taking a water taxi is that you can avoid traffic and enjoy the river scenery as you go.

If you are traveling by SkyTrain, take it to Saphan Taksin station and follow the boat pier signs. You can reach the elephant pier by taking the river taxi north for nine stops; the taxi stops are marked with signs.

If you lose track of the stops, don’t worry. You can see the Grand Palace between the Tha Tien pier and Tha Chang pier from the boat. After getting off at Tha Chang pier, walk about 100m south (to the right) to the entrance to the palace.

It can be a little daunting or even hectic for someone who has never used the river taxi system before. A big problem with piers is that the boats don’t come to a full halt as attendants blow whistles and struggle with ropes to keep them afloat.

The whole thing seems rather hectic. The captain recommends passengers board and disembarks the boat as quickly as possible to avoid delays. You don’t have to worry, since the Grand Palace is always the most crowded stop along the river. There will be time for you to depart the boat.

The Grand Palace can be reached on foot (around 20-25 minutes) from the Khao San Road. Walking down the road near the river or skirting the edge of the green Royal Field is your best option. 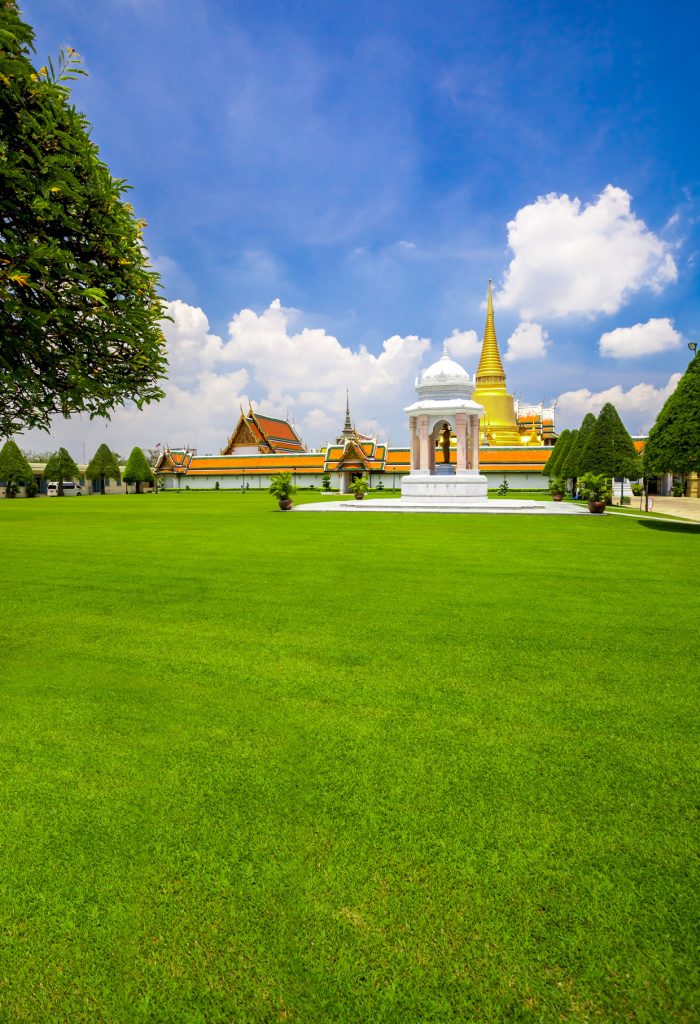 Remember that the Grand Palace has a fairly strict dressing code that you must obey if you intend on entering. Items of forbidden clothing include shorts, tight-fitting trousers, mini-skirts, any see-through item of clothing, sleeveless tops, sandals (excluding those with heel straps), sweatshirts, sweatpants, and pajamas.

A guard will not let you in, even if you wear a scarf to cover your shoulders. Rather than being turned away at the Grand Palace’s exit, it is better to overdress and drink lots of water in order to avoid overheating.

Temples such as the Grand Palace are often free to enter, which makes the entrance fee of 500 baht (the US $16) reasonable. The Thai government doesn’t charge Thai nationals. 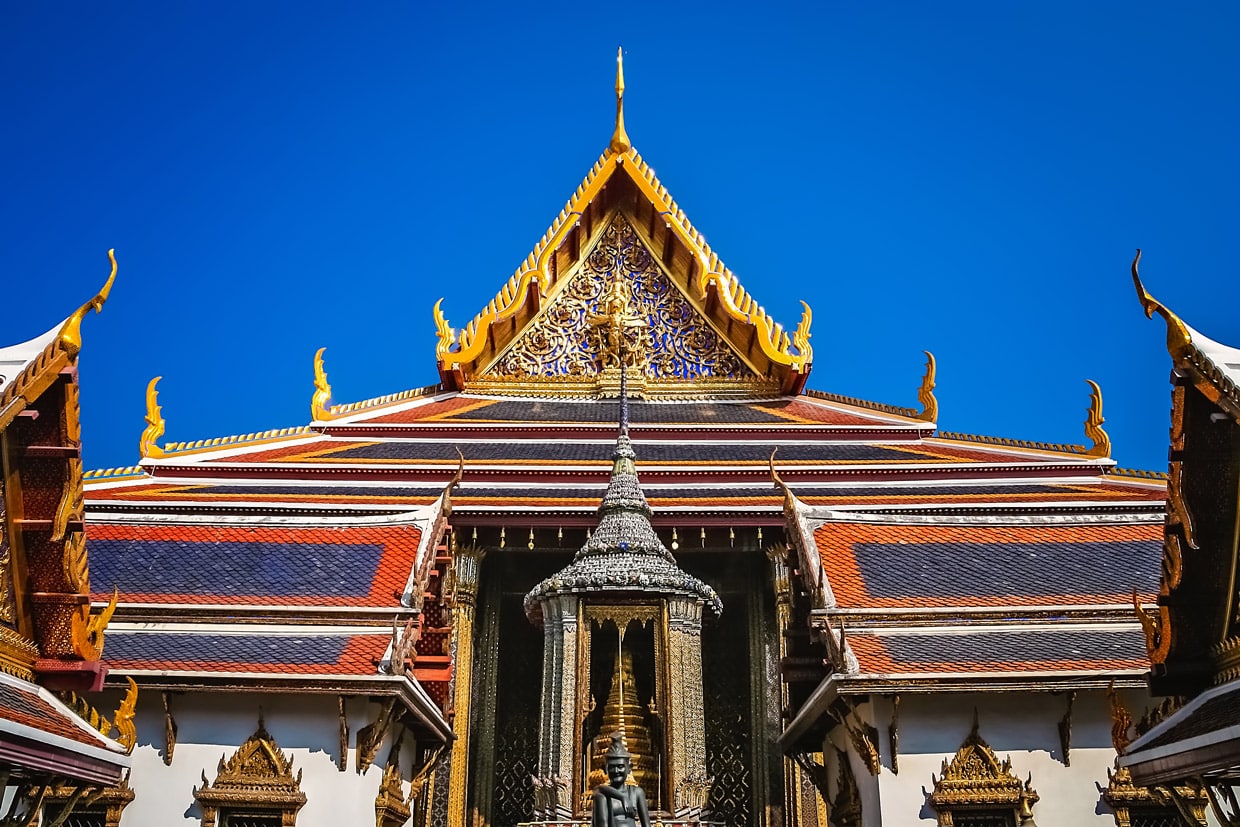 It is true that sometimes the Grand Palace closes for official visits or state functions, but this occurs rarely. If you can’t get to the Grand Palace before 3:30 p.m., don’t believe any driver who says it is closed!

Scams Are Everywhere; look out!

There are several different scams that tour guides outside the palace used to try to get people to take their tours instead of going to the Grand Palace on their own. Here are a few lies, scams, and misinformation we heard about or have fallen victim to to help you avoid the same fate