The Golden Temple in India

Ever since it was constructed, the Harmandir Sahib was targeted by extremists and invaders of India, like the Mughals and Afghans. But no matter how much damage and destruction was done, the Sikh Gurus continued to repair, rebuild and expand the temple.

The Golden Temple in Amritsar, also known as the Harmandir Sahib (Adobe of God) or Darbar Sahib (Exalted Court), is a famous religious center for Sikhs in India. The temple and the pool around it are a complex known as a Gurdwara to Sikhs, a spiritual location, and a place of unity. This place of pilgrimage is open to all faiths and people who seek peace and serenity. Traveler or pilgrim, learn about the Harmandir Sahib, its symbolic significance, and historical value.

You can see four entrances to the complex, which symbolically means that you are welcome no matter where you come from. As soon as you enter, you see the Golden Temple sitting in the middle of a small island with a small accessway facing west.

History of The Golden Temple

Guru Amar Das chose the site of the complex. He was the third Guru of the Sikh and had the idea of making the lake or Tool of Holy Nectar of Immortality. What he did was finding a suitable place that has two stories behind it. Some claim the land was bought by the donations made by people. Others say Emperor Akbar donated it.

Around this location, a new town emerged that was first named Ramdaspur. The very first part of the Gurdwara was the Amrita Saras (holy tank or holy pool). The ground was excavated, and the pool was made in the center of the city by the fourth Sikh Guru, Guru Ram Das. The ground was dug, and the work was done in 1577 at the heart of the town.

Later on, Guru Arjan Dev, the son of Guru Ram Das, became the fifth Guru decided to build a temple called the Golden Temple in the future. In 1588, a Muslim, known as Miyan Mir and the fifth Guru, laid the stone foundation of this new temple. Their belief was to create a place of unity for all religions and beliefs. The first building of this now magnificent temple was finished in 1604.

In 1606, Akal Takht, the seat of the religious authority of Sikhism, was added to the original structure. This throne of the Sikhs authority gave the building a lot more significance and made it a target to rivals.

Gold for the Golden Temple of Amritsar

The Golden Temple was taken care of by the Sikhs, but it had seen some hard days and several conflicts. Surviving the hardship until the 19th century, the Harmandir Sahib received its gilding in 1830 during the reign of Maharaja Ranjit Singh.

Conflicts and Renovations of the Golden Temple

Problems with the Mughals

The first problem arose when the Muslim Mughal Emperor Jahangir arrested Guru Arjan. He was tortured and executed for not becoming a Muslim, and thus the temple lost its Guru and was left unattended.

The trouble with Other Muslims

The second conflict took place in 1709 when an army came from Lahore to prevent the gatherings of the Sikh. Later on, in 1737, the custodian of the Golden Temple was arrested and killed. After that, Harmandir Sahib and the pool were defiled and turned into a site of entertainment.
Again, another official filled the pool with sand in 1746 as an act of revenge from Lahore. The Sikhs restored the pool three years later, but that was not the end of their troubles.

Ahmad Shah Durrani, an Afghan ruler, attacked the sacred location and desecrated it one more time in 1757. After each of these attacks and disrespectful acts against the Sikhs, they would return and restore the damages as fast as possible. None of these attempts had done any damage that could not be undone.

That was until 1762 when Ahmad Shah Durrani blew up the temple. He did this with the thought that the Sikhs would not be able to rebuild the entire complex, which they did. Only two years had passed, but the people had gathered donations and rebuilt the Harmandir Sahib.

Fourteenthly for the Sikhs, Maharaja Ranjit Singh founded a Sikh Empire and helped develop and care for the Harmandir Sahib. The gilding that took place is his time was also funded with his help. It can be said that it was at this point that Amritsar saw its golden age and was protected by harm.

Dedication of the Sikhs to the Golden Temple

You may ask, who did all these restorations and repairs? The answer is simple, the dedicated believers of the Sikh religion that were sometimes led by some prominent figures. But it was mostly preserved and protected by ordinary people and believers.

One last attack on the temple took place during the 1984 operation Blue Star. This time the damage was not too much and was repaired by the Indian Government after the conflict.
The last known renovations to the Harmandir Sahib in Amritsar were done in 2016. These renovations were done when the government had decided to restore several heritage sites to their former glory. 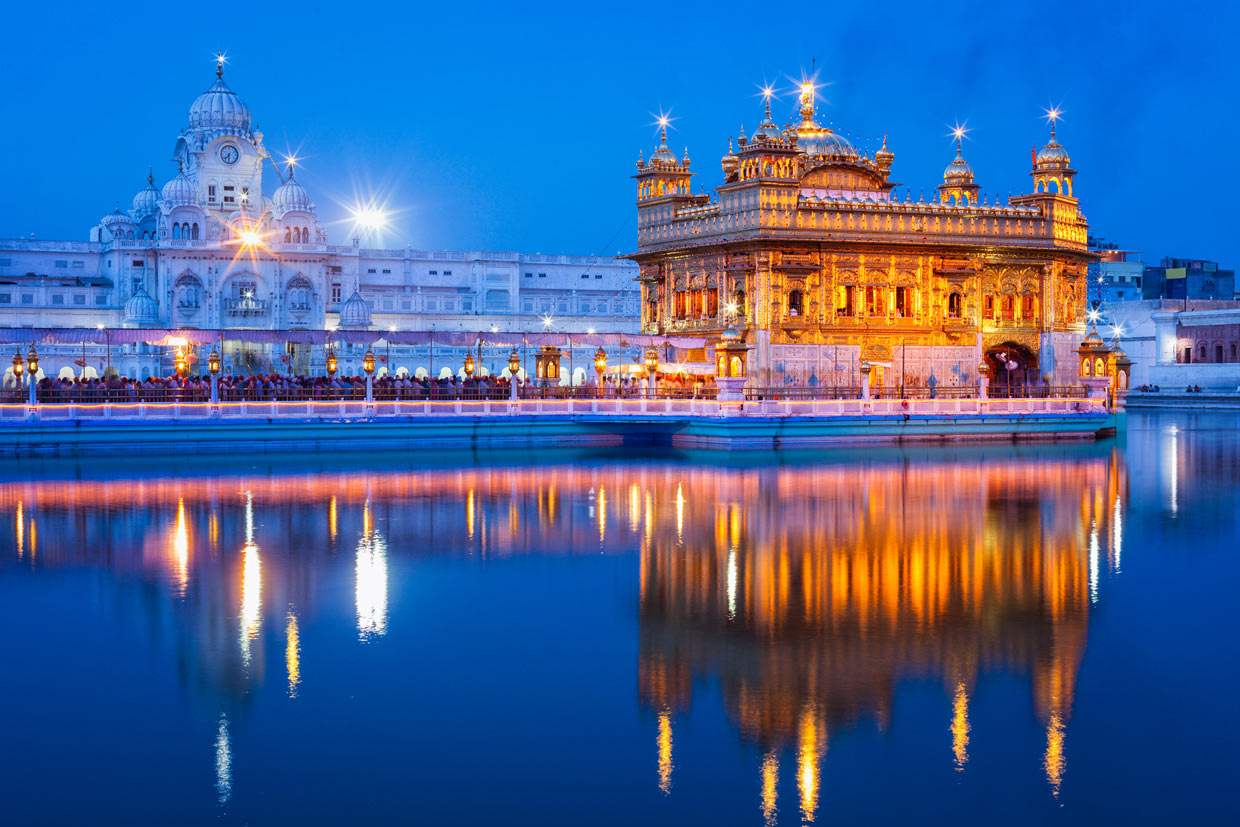 The Architecture of the Golden Temple

The temple’s design and the surrounding buildings have been altered time after time in its numerous attacks and repairs. It is mostly Indo-Islamic but also has several elements of design from Mughal and the Hindu Rajput styles.

The complex is surrounded by walls and gates, which are located in all four directions. Other than the significance of unity and being open to everyone, the site is also lower than the ground level. The structure is built at a lower height to indicate humility as people enter the Golden Temple.

As you enter the ground, you will step on the marble passage around the pool. The passage is nearly four meters wide and leads up to the pathway connected to a small island. The Amrita Saras (holy tank) is about 5 meters deep that surrounds the island and the main structure of Harmandir Sahib.

One of the pool’s religious aspects is seen in the stone steps leading down into the water. The Sikhs believe that the waters are sacred and have healing abilities. You cannot go all the way into the pool, but you may also join the Sikhs in stepping down the stone steps if you like. And to make you feel safer, you should know that the pool is maintained, drained, and distilled regularly.

All the other buildings and areas aside, now it is time to enter the Gurdwara. You will have to wait in line on the causeway leading to the small island. When you reach the end of the line, you can clearly see the gold decorations and the precious stones used in the monument. Beneath your feet is the marble floor, and all around you are covered in gold and decorations as well as inlay work and carvings. 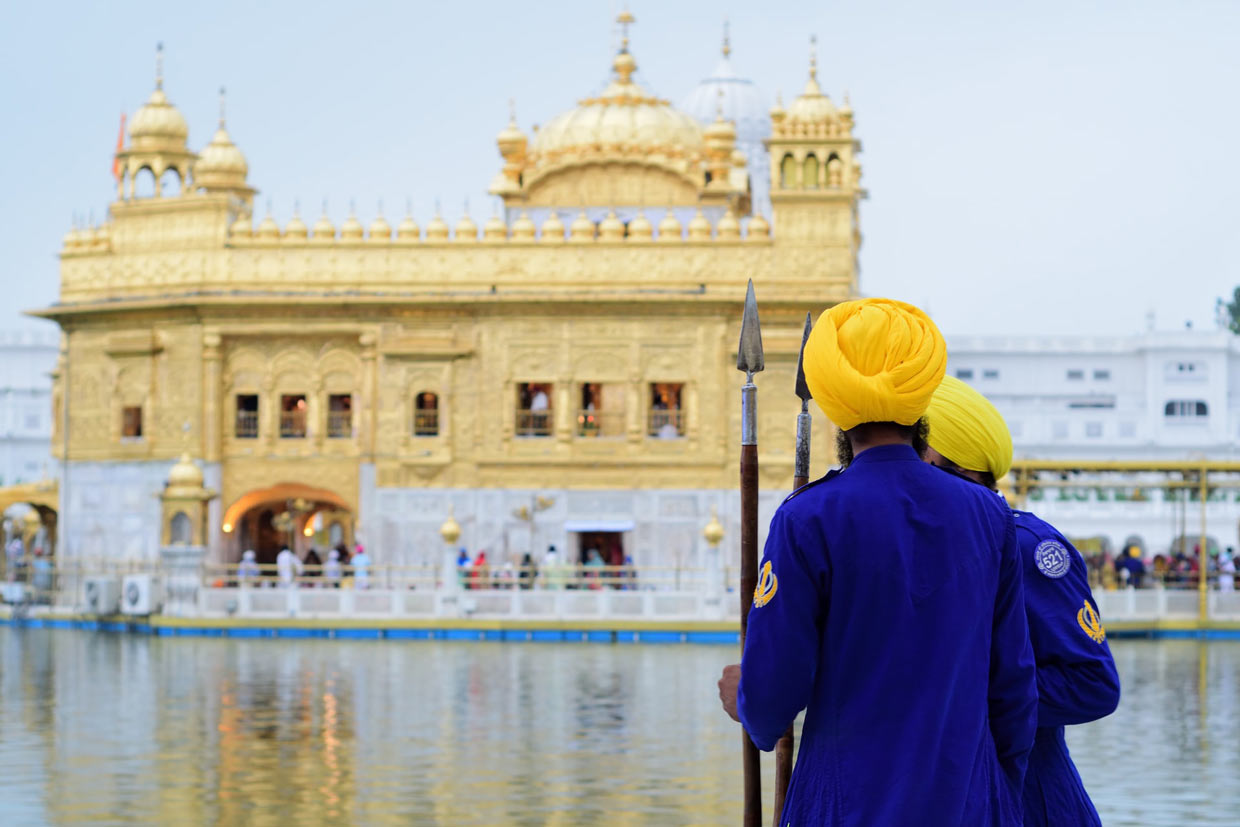 The Reading of Sacred Texts and Music

One of the things you will experience during your visit is the reading of the Guru Granth Sahib. This text is the sacred writings of Sikhism placed in the Golden Temple and is read every day from early in the morning until night! As the sacred words are read, several musical instruments are also played.

What Are the Surrounding Buildings?

Several structures serve as official offices and visiting sites in the complex. Some of the like the Museum and Langar can be entered while others may not be accessible for everyone.

Inside the building, one of the most important sections is the Akal Takht. The throne, as mentioned earlier, is the seat of authority to the Sikhs. There are five of these seats, but the one in the Golden temple is the chief seat among the five.

The Museum of Sikh History

Having read a little about their history, you might also want to visit the Museum inside the complex. This museum holds records and artifacts related to the Harmandir Sahib, the Sikhs, and their past.

One of the most amazing parts of the visit to the Golden Temple complex is going to the Guru Ram Das Langar. The Langar is a community kitchen where numerous volunteers prepare about 100,000 meals for the people. It does not matter who you are or what you believe in, you enter the house of God, and therefore, you will be fed!

The dining area provides food to everyone, and they can all sit around and enjoy a meal on equal grounds. The same area is often used for religious events and ceremonies. In case you are wondering, you can also join the community kitchen and help prepare the food. 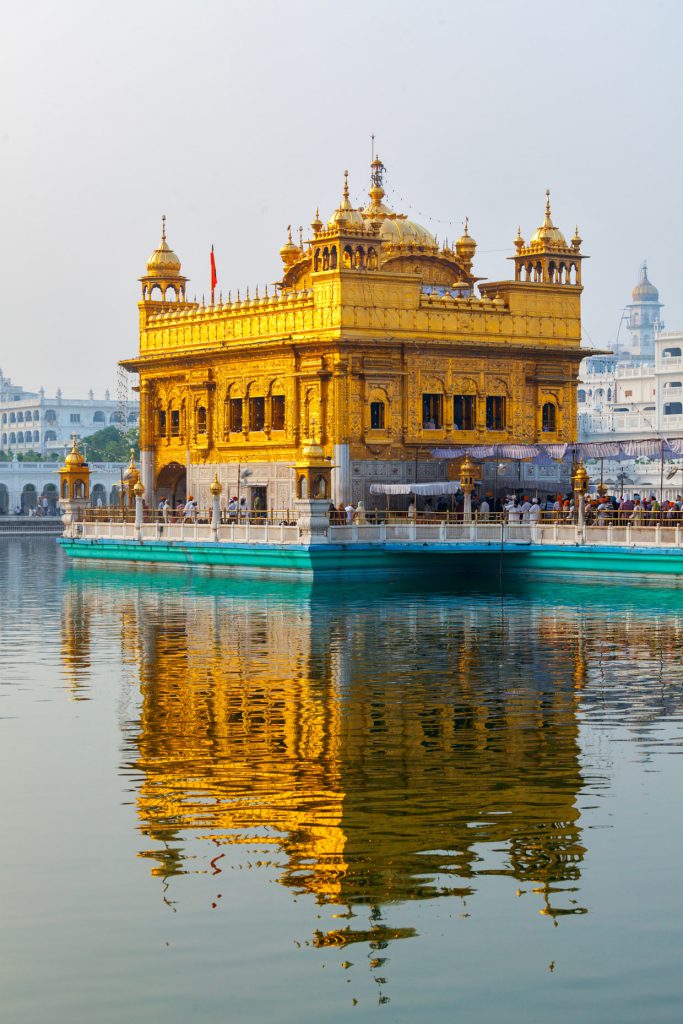 Visiting the Golden Temple of Amritsar

The building is open for all visitors, but there are some rules that you must obey when entering. First of all, you must be wearing appropriate clothing to cover all your skin and hair. As you enter, you will have to wash your feet as a sign of respecting the grounds. In the complex, you will have to remove your shoes. Men must wear a bandana to cover their heads, and women will need scarves.

Visit During the Day and the Night

One during the morning and one during the night, the sacred book is carried in the complex. It is brought to be read in the morning, and at night, it is escorted to be put to bed. At all times in between these two rituals, you will hear the text read out loud.

It is recommended to visit twice to see the building and the golden dome at both times. If you want to experience peace even more, you can visit and stay for the whole day.

Amritsar’s city was originally built around the Golden Temple, but the area around the temple is no longer the central section of the city. This district is generally known as the old town but has access to railways and buses. You can take a train or a bus to the nearby areas, but they can only get you so far. Vehicles and transports cannot get too close to the building as traffic is banned.