Terracotta Army of Xi'an is a huge collection of terracotta sculptures that used to function as an afterlife army for protecting emperor Qin Shi Huang.

The Terracotta Army of Xian, famously known as Terracotta Warriors and Horses, is a massive collection of outstanding life-size terracotta sculptures. These were made to replicate a battle formation, which resembles the mega imperial guard troops of Emperor Qin Shi Huang (259 – 210 BC). He is known to be the first emperor to rule the unified dynasty of Imperial China.

It is considered as the most noteworthy and substantial archeological excavation of the 20th century. Moreover, it is a recognized UNESCO World Heritage site. Terracotta Army is a tourist spot worth visiting in Xian. It was initially planned as the historical funerary project for Emperor Qin Shi Huang. Then it developed to be a live museum and then, it was called Emperor Qinshihuang’s Mausoleum Site Museum. The museum offers the life and reign stories of the emperor as well as the very influential Qin Empire (221 – 207 BC). (Video Credit: Milosh Kitchovitch)

Terracotta Army as The Eighth Wonder of The World

The Terracotta Army was regarded as the Eighth Wonder of the World by the former French Prime Minister Chirac in 1978 due to its huge pits and magnificently carved 8,000 figures and horses. It was discovered in 1974 and awarded as a UNESCO World Heritage Site in 1987.

The army signifies the 2,200 years of Qin history. It was the period of the entire unification of China in which, a powerful and abundant dynasty was successfully established. With a population of 20 million, an annual income of 2,000 kilograms worth of sliver, military advantage, and economic advantage, the dynasty was able to create the funerary project for the emperor’s mausoleum. However, in 208 BC, the mausoleum construction was stopped and buried to the ground.

It was discovered in March of 1974 and buried 1.5 km to the east of Qin Shi Huang Mausoleum mound. Local farmers were digging a well in wasteland near Xiyang Village when one digger excavated one of the life-sized warriors.

Emperor Qin Shihuang ordered the construction of the massive Terracotta Army to guard him in his afterlife. It was Prime Minister Li Si who designed the construction and senior general Zhang Han who supervised the men at work. Workers are mostly artisans and potters.

Well-Known People Who Visited The Museum

Many well-known celebrities and leaders have already visited the site. They have delivered profound messages to show their appreciation and awe after seeing the Terracotta Army. Some of them are former Prime Minister Lee Kuan Yew of Singapore, former President Jacques Chirac of France, former Presidents Ronald Reagan and Bill Clinton of the United States, and President Vladimir Putin of Russia. 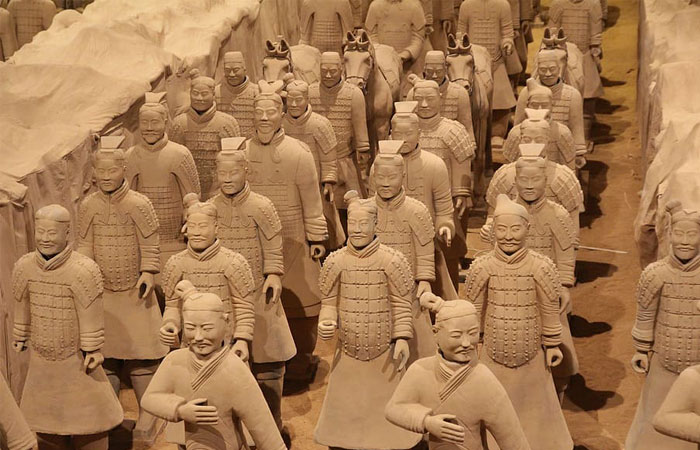 The warriors and horses are located in 3 major pits.

Pit 1 is the largest one, which was discovered in 1974 and opened to the public on Oct. 1st, 1979. Here, the three-row frontline of the army, the huge battle formation of infantry, and war chariots can be seen.

Pit 2 was founded in 1976. It is located 20 meters northeast of the first discovered pit. It is the most brilliant one for the assortment of divisions such as infantry, crossbow team, cavalry, and 80 chariots.

The last pit was discovered in 1976, which is located 25 meters northwest of Pit No. 1. It is the pit for the armed forces’ command post. It has 68 warriors and a chariot with four horses.

To fully appreciate and examine the intricate details of the formations and sculptures, a visitor must set aside 2 to 4 hours in this section of the museum.

It was discovered by the museum’s archaeologists in 2000. It is an accessory pit that houses 12 pottery figures. Due to the 8 civil officials included in the pottery, the pit was called Civil Official Figures Pit.

In 2000, the pit K0007 was found. There were the farmers of a nearby village who first discovered this fit which was considered as the farther accessory pit to date. More excavation revealed bronze aquatic birds, thus, it was named Bronze Aquatic Birds Pit. Though Pit K0007 is closed for public viewing, visitors can still see the aquatic birds in the Exhibition Hall of Historical Relics of Emperor Qin Shihuang’s Mausoleum near Pit 1.

This accessory pit was discovered in 1996 by a farmer of Xiachen Village. The excavated relics are mostly stone armor and helmets; therefore, the name Stone Armor Pit. This portion of the museum is not yet open to the public but the excavated items can be viewed in the Exhibition Hall of Historical Relics of Emperor Qin Shihuang’s Mausoleum.

This pit is located in the southeast portion of the Qin Shi Huang Mausoleum discovered in the year 1999 when eleven acrobatic figures painted in colors and a bronze tripod were unearthed. K9901 has a unique shape of “凸”, a Chinese character, with a 40-meter stretch from east to west. 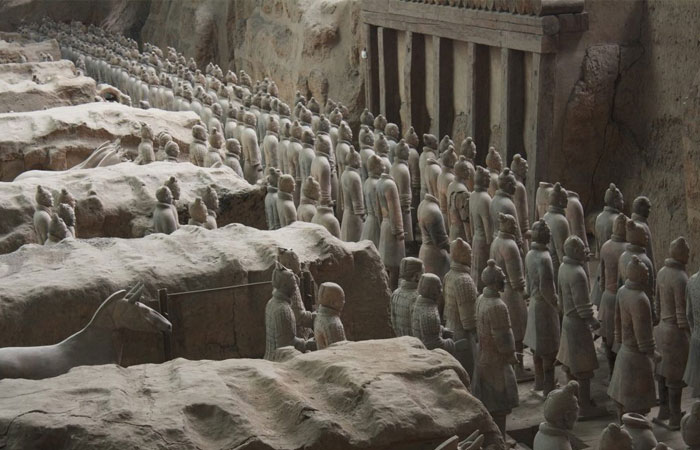 There were around 40,000 bronze weapons discovered in the pits. The best weapons of the Terracotta Army are swords, billhooks, spear, dagger-ax, halberd, battle-ax, shu, bayonet, crossbow, and arrowhead.

The warriors have different clothing depending on their ranks. The officers wear an intricately made headgear, single or double-layered gowns with length up to the knee, pants, shoes, which has a colorful armor covering their body. While the terracotta soldiers wear a knee-length gown, an armor, a hat, pants, and boots. 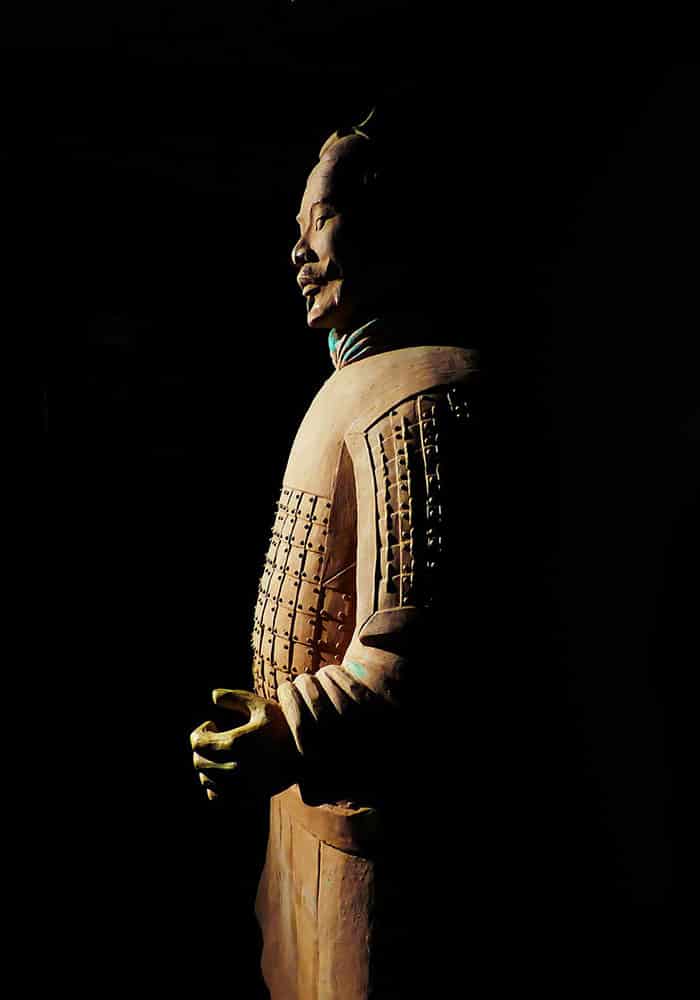 It should be mentioned that IDs or passports are needed in purchasing tickets or entering the museum; therefore, don’t forget to bring them. Besides, if you need to get more information, you can be in touch with the museum using the phone number +86 29 8139 9001. Finally, we will be grateful if you share your information and thoughts with us.

Explore Vietnam From South To North